EXPRESS INFORMER > News & Politics > Bambi to the rescue! Moment deer races in to save rabbit being attacked by a hawk

Bambi to the rescue! Moment deer races in to save rabbit being attacked by a hawk

This is the incredible moment a deer comes to the rescue of a rabbit which is being attacked by a hawk.

CCTV footage shows the bird of prey swooping down on the rabbit at the Nordic Mountain country park in Wisconsin, before its victim lets out a piercing distress cry.

Out of nowhere, a deer suddenly appears and makes a beeline for the hawk, kicking it with its hooves and allowing the rabbit to scamper away.

The deer is then seen repeatedly stomping on and biting the bird for up to three minutes before it eventually dies.

The video was discovered by 29-year-old operations manager Kris Miller on June 11.

He had been trimming trees in the area when he saw a red-tailed hawk dead on the ground and decided to check the nearby camera’s tapes.

Kris said: ‘The rabbit started to make a distress call and the deer may have mistaken the call for her own fawn’s distress call, or maybe it’s just a true Bambi and Thumper story.

‘I personally have never seen anything like this before.’

Miller added: ‘I remember thinking to myself “hawks don’t just fall from the sky and die”.. So I noticed we were in front of one of our security cameras and was hoping I could see what really happened.

‘I played back the footage on my phone and what I found was astonishing. I showed it to my co-worker and he didn’t know what to say.

Don’t you deer! Hawk is kicked and stamped on by a deer appearing to come to the rescue of its rabbit friend at the Nordic Mountain park in Wisconsin 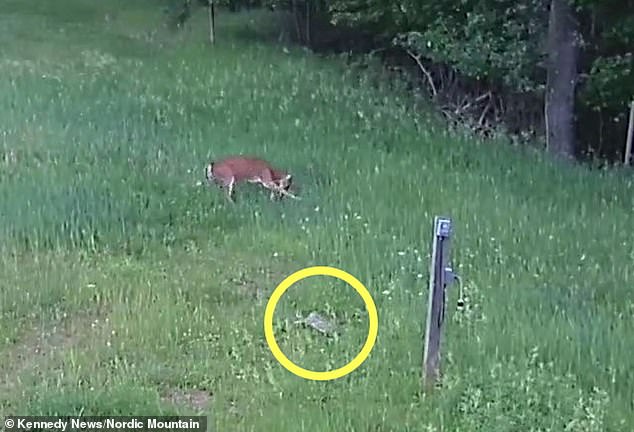 Hare-raising: Rabbit makes its escape while the deer continues to stomp on the red-tailed hawk 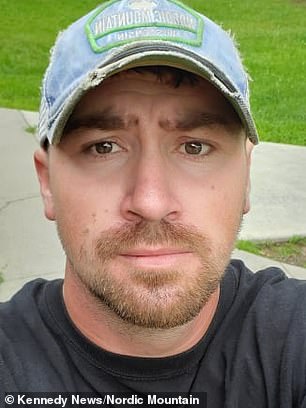 Kris Miller, who works at the Wisconsin park, said he had never seen anything like it before

‘We are a county park so there’s no hunting allowed here, therefore a lot of white tail deer migrate here knowing they’re safe.

‘In the video it appears either the red tailed hawk was struggling holding the rabbit or it swooped down to grab a rabbit.’

The footage has been viewed more than three million times since being uploaded to social media, with many commenters saying the deer was ‘Bambi avenging Thumper’.

One commenter said: ‘Bambi has Thumper’s back lol.’

Another wrote: ‘Aww Bambi just trying to save Thumper.’

Another viewer added: ‘I’m sure that many things go on in nature that are seldom witnessed. This goes to the top of the wow list. Who would have thought?’