Whales – the largest animals ever known to have lived on Earth – are ingesting microplastics on a colossal scale.

Researchers at Stanford University in California modelled how many pieces of plastic filter-feeding whales consume each day.

To do this, they combined measures of microplastic concentration in the North Pacific Ocean and logs of whale foraging locations.

Their results show that baleen whales – which include blue, humpback and fin whales – eat up to 10 million pieces of microplastic every day.

Blue whales ingest the most, as they feed almost exclusively on shrimp-like animals called krill.

‘They’re lower on the food chain than you might expect by their massive size, which puts them closer to where the plastic is in the water,’ said study co-author Dr Matthew Savoca.

‘There’s only one link: The krill eat the plastic, and then the whale eats the krill.’

Depth of whale foraging in relation to microplastic in the water column. A: Plastic ingested by whales each day was modelled as the sum of plastic filtered from water per day and plastic consumed in prey per day. B: Lunge depths from deployments in Monterey Bay aligned with the depth profile of plastic concentration in Monterey Bay 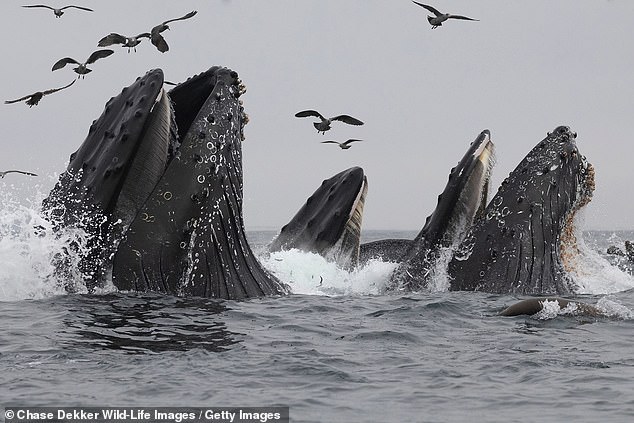 Humpback whales lunge feed in Monterey Bay. New research shows whales are ingesting plastic in larger quantities than previously thought, and nearly all comes from their prey, not from the enormous volumes of seawater the whales gulp when feeding 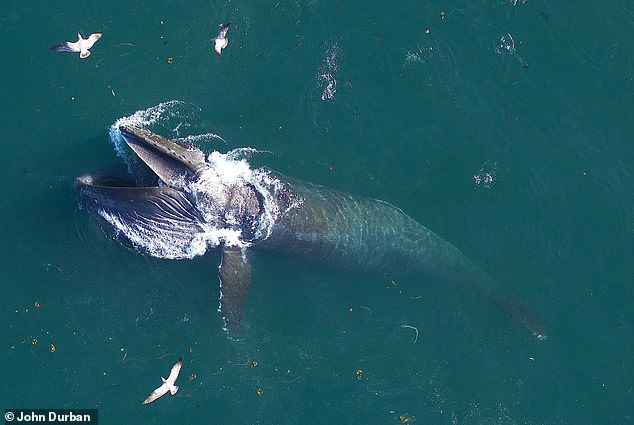 Humpback whales subsisting primarily on fish such as herring and anchovies were found to ingest an estimated 200,000 pieces of microplastic per day, while krill-feeding humpbacks ingest at least 1 million pieces. Pictured: A humpback whale feeds off the coast of California

HOW MUCH PLASTIC DO WHALES EAT EACH DAY?

Blue whales – Up to 10 million pieces

It is thought that baleen whales may be at a particularly high risk of microplastic ingestion.

This is due to their filter-feeding behaviours, the huge volumes of prey they eat and the fact that they typically live in polluted regions, such as the California Current.

However, data on their daily plastic consumption is lacking and limits our understanding of its risk, health effects and how any impacts could be mitigated.

‘Large filter feeders like baleen whales evolved to process and filter vast amounts of the ocean, so they represent sentinels of environmental change including pollution like microplastics,’ said senior study author Jeremy Goldbogen.

For this study, published today in Nature Communications, microplastics are defined as fragments no bigger than a few grains of sand.

To build their model, the researchers used data on the feeding habits of whales living in waters off the coast of California collected between 2010 and 2019.

Movement and physiological data was obtained rom 191 tagged whales, while the depth and density of fish and krill patches close to where they feed were mapped with echosounders.

This data was collated with measurements of microplastic concentrations up and down the water column. 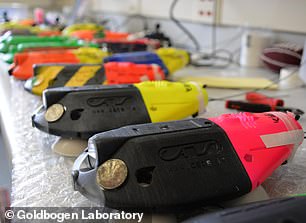 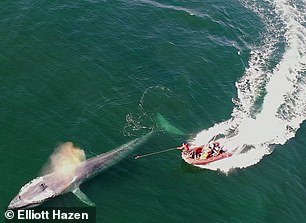 Movement and physiological data was obtained from 191 tagged whales, while the depth and density of fish and krill patches close to where they feed were mapped with echosounders. Left: Several of the suction cup tags used to obtain high-resolution data from baleen whales Right: Approaching a blue whale to attach a suction-cup tag to a whale 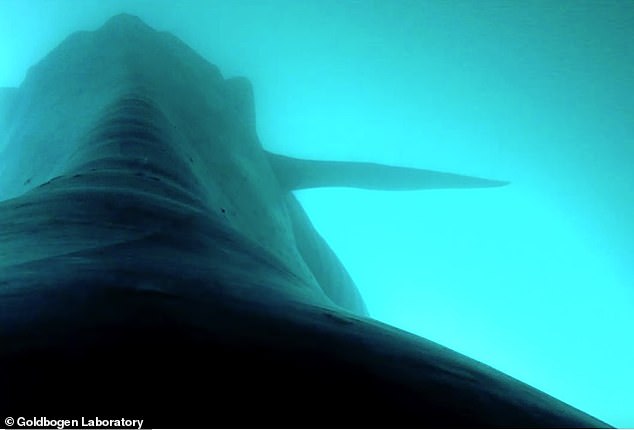 It is not yet clear what implications the microplastics have on the health of the whales. Pictured: A blue whale takes a lunge and a engulfs a mouthful of krill as captured by a with a removable tag off the coast of California

It was found that baleen whales predominantly feed 164 to 820 feet (50 to 250 metres) below the surface, where the most microplastics are found.

Humpback whales subsisting primarily on fish such as herring and anchovies ingest an estimated 200,000 pieces of microplastic per day, while krill-feeding humpbacks ingest at least one million pieces.

Fin whales, which feed on both krill and fish, ingest an estimated three million to 10 million microplastic pieces per day.

Consumption rates are likely even higher for whales foraging in more polluted regions, such as the Mediterranean Sea, Savoca said.

It was also found that nearly all the microplastics whales consume come from their prey, rather the enormous volumes of seawater they swallow while capturing it.

This means they may pose more of a risk than previously thought, as they could reduce the calories they reap with each energetically-expensive lunge.

Lead study author Dr Shirel Kahane-Rapport said:  ‘We need more research to understand whether krill that consume microplastics grow less oil rich, and whether fish may be less meaty, less fatty, all due to having eaten microplastics that gives them the idea that they’re full.

‘If patches are dense with prey but not nutritious, that is a waste of their time, because they’ve eaten something that is essentially garbage.

‘It’s like training for a marathon and eating only jelly beans.’ 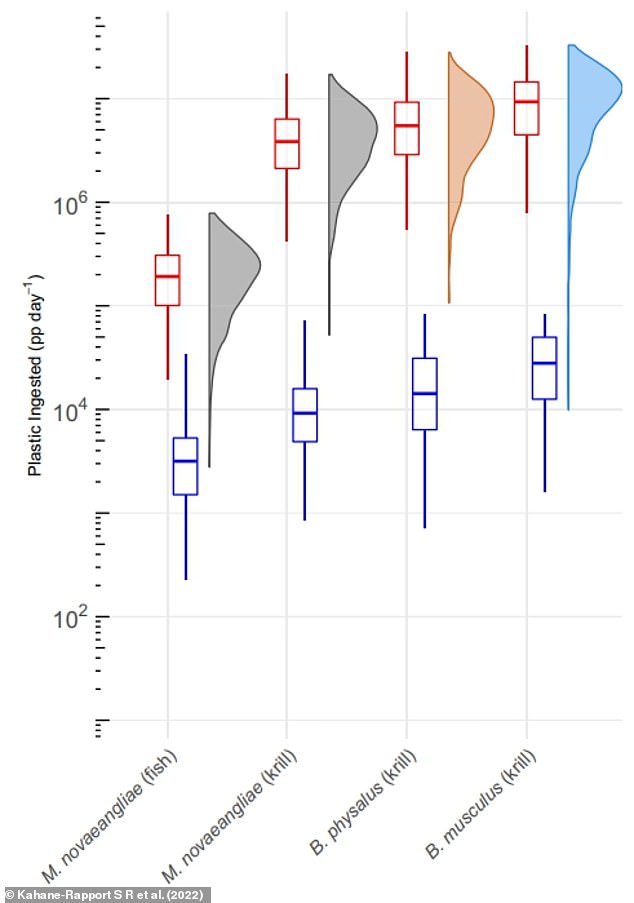 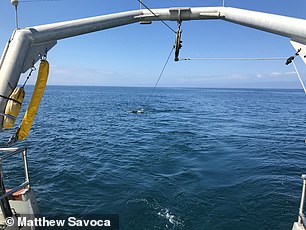 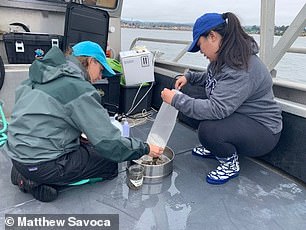 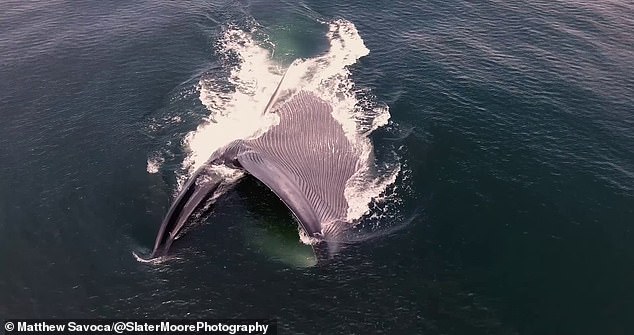 While other marine species have been known to be consuming plastics for the last 50 years, it could pose a larger threat to whales because of how much they eat.. Pictured: A blue whale feeds on krill off the coast of California

While other marine species have been known to consume plastics for the last 50 years, it could pose a larger threat to whales because of how much they eat.

The species is also struggling to recover from historical whaling, as well as survive other threats related to climate change and pollution.

It is not yet clear what implications the microplastics have on the health of the whales.

Dr Kahane-Rapport said: ‘It could be scratching the linings of their stomach, it could be absorbed into the bloodstream, or it could all pass through the animal. We don’t know yet.’

The authors argue that understanding microplastic ingestion rates and their effects on marine ecosystems is crucial to addressing the threat plastic waste plays in conservation.

They will next examine how dense patches of microplastics and prey are formed in the ocean.

They will also look at how microplastics affect the nutritional value of key prey species for baleen whales and other marine wildlife.