A couple were beaten and robbed of £9,000 at gunpoint by masked thugs when they tried to collect a car they had bought on eBay.

Driving instructor Jamie Hallam, 48, and his fiancee Georgina had seen a white 18-plate Mercedes GLA on the auction website and were successful in bidding for it.

They travelled 190 miles from their home in Norwich to Manchester with the cash but were ambushed by two armed balaclava-clad raiders as they arrived at the address given on the car’s registration documentation.

Jamie was left with a fractured eye socket, fractured nose and broken cheek bone and may require surgery.

Greater Manchester Police are investigating the robbery and say the gang are behind at least nine other similar attacks, falsely selling cars on Ebay and attacking the buyers.

It is unclear exactly what type of Mercedes GLA the couple went to pick-up, though second-hand models are on sale on Motors.co.uk for more than £20,000.

Jamie and Georgina arrived at the address the car was registered at before receiving a call from the ‘seller’ asking where they were.

Before they knew it a van screeched to a halt blocking their escape and two balaclava-wearing thugs jumped out.

As driving instructor Jamie wrestled with one of the men, the other pointed a gun at his terrified girlfriend who had the cash with her as she sat in their locked car.

Jamie then had the gun pointed at his head and the thugs began to beat him and kick him on the ground until his girlfriend opened the car door.

Terrified Georgina then had the gun pointed at her head until the cash was handed over.

The couple said they had checked the details of the sellers out as much as they could before they set off for Manchester.

Jamie posted a picture showing his injuries on Facebook as a warning to others to be careful when buying online.

Greater Manchester Police have linked the robbery at 5.40pm on January 17 in Longsight, Manchester to nine others across the city and Oldham.

Another six cases are also being looked at by the force. 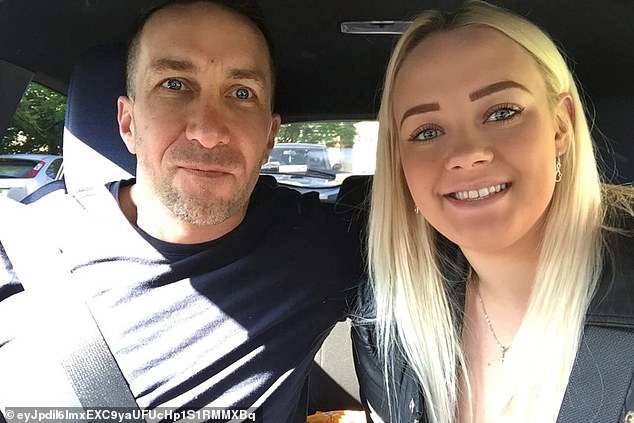 Jamie said: ‘It’s the most traumatic experience of our lives. We keep talking about it over and over.

‘We have bought a car on eBay before and I did numerous checks which all seemed to come back as legitimate.

‘I just didn’t imagine anything like this would happen.’

Jamie had been reluctant to transfer all of the money over before getting the 18-plate car because of the distance so decided to pay a deposit on PayPal take the cash with him to collect the vehicle.

He said: ‘We arrived at the address given on the V5 document. I was about to knock on the door when I got a call from the seller asking if we had arrived yet.

‘All of a sudden this van pulled up and two men dressed all in black got out. They had gloves on and were wearing balaclavas to cover their faces.

‘I struggled with one of then but realised that the other was pointing the gun at my fiancee who was in our car telling us to hand over the money.

‘Then the other guy came round to me and pointed the gun at my head.

‘We had no choice but to hand the money over.’

He added: ‘It’s not so much the physical injuries – it’s more the psychological trauma.

‘My fiancee is really shaken by the ordeal.’

Posting on Facebook Jamie said: ‘I hope the picture doesn’t shock too much but feel the need to share this story with you all!

‘My fiancée is obviously very shaken. I’m not looking for your sympathy just felt the need to share this story, these things really do happen to us normal people out there so please think twice before you pay cash for anything!! Please do share as I hope this will one day help others not to make the same mistakes.’

A Greater Manchester Police spokesman said: ‘A number of victims have been targeted through false car advertisements on the online auction website Ebay. Between Tuesday 19 November 2019 and Wednesday 22 January 2020, police received 10 reports of armed robberies across Manchester and Oldham.

‘Having reviewed several lines of enquiry, detectives are now treating the incidents as linked and are investigating a further six incidents which have been reported as suspicious circumstances.

‘On most occasions, offenders falsely advertised a car on Ebay and organised to meet the buyers at a given location for the car sale. On arrival, the potential buyers were threatened with weapons, including with a gun, a hammer and machetes and offenders fled with a large quantity of the victim’s cash.’

‘These offenders are targeting innocent members of the public via the internet and have no compassion at all for their victims who they have subjected to a number of terrifying ordeals.

‘They are devious and ruthless and need to be caught. For this reason, we have a dedicated team of detectives working around the clock to identify those responsible.

‘Though, I would like to take this opportunity to remind people to say alert and vigilant and report anything suspicious to police immediately.’

Georgina’s family have set up a GoFundMe page to try and re-coup the money stolen.