A Hovis baker is suing his former bosses for £280,000 after claiming a fall at work left him with brain damage.

Yacob Adan, 45, is demanding compensation from Premier Foods Plc, the former owner of the iconic bread brand, over the accident in March 2014.

He claims he was left unconscious and brain damaged after tripping while pulling a trolley of baking tins at Hovis’ factory in Erith, Kent.

Mr Adan, who broke his collar bone in the fall, says he has pain-related psychiatric issues, and has been left ‘disabled’ and unable to work in the seven years since.

Lawyers for Premier Foods admitted he was injured but claim Mr Adan has hugely exaggerated his symptoms in a ‘fraudulent’ bid to inflate his payout.

Yacob Adan, 45, is demanding compensation from Premier Foods Plc, the former owner of the iconic bread brand, over the accident in March 2014

Central London County Court heard Mr Adan was working at the bread factory in March 2014 when he suffered his fall.

He was pulling a large trolley down a narrow corridor when he tripped over a bolt in the floor.

He crashed to the ground, breaking his collar bone, and had to be taken to hospital.

He has since suffered with depression which was contributed to by the persistent pain in his back and arm after the fall at work.

Lawyers for his former employers accept that he was hurt in the accident.

But they claim he has been ‘fundamentally dishonest,’ lying to the court in a bid to inflate his compensation payout. 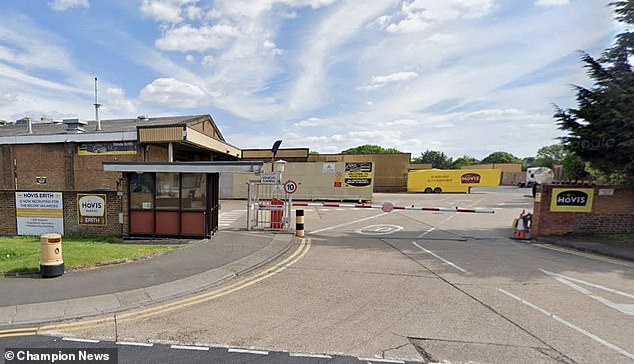 Mr Adan claims he was left unconscious and brain damaged after tripping while pulling a trolley of baking tins at Hovis’ factory in Erith, Kent

Although he did fracture his collar bone, the ongoing symptoms which Mr Adan complains of cannot be explained, said the company’s barrister Simon McCann.

‘The reason the level of symptoms complained of has no medical explanation is because there could not be one,’ he told Judge Heather Baucher.

‘The claimant is simply trying to mislead the court and the defendant for the purposes of gain.’

Mr McCann pointed to surveillance footage taken during the time Mr Adan claimed he was unfit to work, showing him out for the day with kids, carrying a bag and using his right arm to balance himself on a bus.

He had been able to be the ‘primary carer’ for his young children, despite claiming that during the same period he had to spend over £40,000 out of his own pocket on carers because he was unable to look after himself.

‘The claimant’s allegations of ongoing disability and significant financial losses are dishonest assertions,’ he claimed.

‘The defendant does not accept that the care claimed was ever in fact provided – and certainly not to the level claimed.

‘Moreover, it is submitted that there is no medical opinion upon which the claimant can rely to support the need for care.

Cross-examining Mr Adan in the witness box, he suggested that he had never in fact been unconscious following the accident, accusing him of telling ‘lies time and time again.’

But Mr Adan, speaking through a Somali interpreter, told the judge he had been knocked out. The first thing he remembered was coming round with people around him on the floor, he said.

Denying Mr Adan had lied to the court, his barrister Robert Parkin said the medical evidence in the case ‘falls far short of a finding of exaggeration.’

Psychiatrists who had examined Mr Adan agreed that he has suffered with depression, which may have been contributed to by ‘persistent pain,’ he told the judge.

‘What is clear is that the claimant suffered a fractured right clavicle and a mild brain injury which would have had relatively short term physical consequences, probably with recovery after around one year,’ he said.

‘However he may, as a result, have been more vulnerable to pain symptoms and a depressive episode as a result.’

The surveillance evidence also did not prove he was exaggerating, as it showed him favouring his non-dominant left hand and moving ‘relatively sluggishly.’

‘This is consistent with the claimant having some significant ongoing degree of disability at a time he did not know that he was under observation,’ he said.

Premier Foods initially owned all of Hovis after purchasing the 134-year old bakery brand in 2007, but has since sold off its entire stake.