People who vape are more at risk of developing cavities in their teeth, warns a new study.

After inhaling, the sticky and sugary content of vaping liquid sticks to the teeth causing all the damage.

The liquid also changes the microbiome of the mouth, making it more hospitable to decay-causing bacteria.

And vaping appears to encourage decay in areas where it usually doesn’t occur, such as the bottom edges of front teeth.

The Centers for Disease Control and Prevention (CDC) reported that 9.1 million American adults and two million teenagers use tobacco-based vaping products, meaning there are a lot of vulnerable teeth across the country.

People who vape are more at risk of developing cavities in their teeth, scientists warn (stock image) 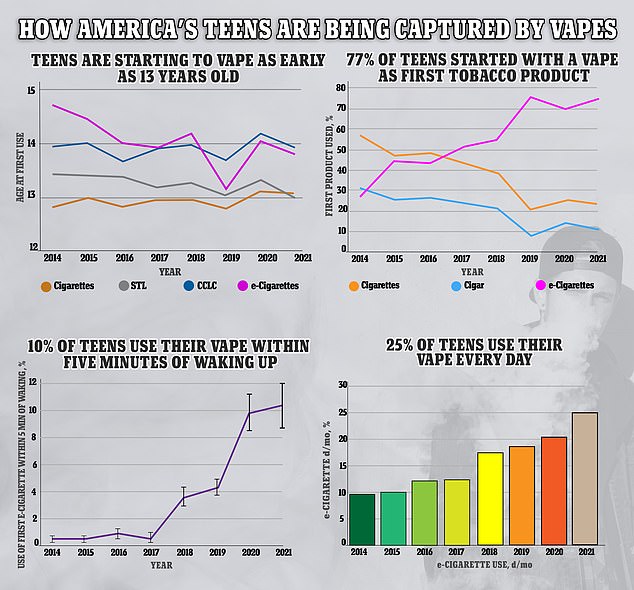 The average teen vaper starts using e-cigarettes at just 13, according to a major study. An analysis of Centers for Disease Control and Prevention ( CDC ) data by researchers at Massachusetts General Hospital (MGH) has laid bare the country’s teen e-cigarette epidemic. The results are based on a fresh analysis of survey data – originally published last month – that involved 150,000 responses from American teens between the age of 12 and 18 from 2014 to 2021. It suggests vape devices have become the gateway to nicotine addiction, with nearly 80 per cent of users saying their first experience was with e-cigarettes. This figure has stayed consistent since 2019, and began to surge from around 40 per cent in 2016

Chronic pain: HALF of dentists say patients come in high for dental appointments on marijuana

Half of doctors have been forced to treat a patient who is high on marijuana or other drugs, according to a shock survey.

The American Dental Association (ADA) said it was due to more states legalizing the drug, warning using it before an appointment ‘may affect treatment’.

Experts said patients who came in high may be ‘stressed’, with nearly half of medics telling a survey they had to limit medical care for these individuals.

Dr Tricia Quartey, a New York-based dentist and ADA spokeswoman, suggested using marijuana before an appointment may leave patients struggling to make informed choices about their care. Previous research has also suggested they need more anesthetic because the drug makes them more sensitive to pain.

An ADA survey found half of medics said high patients left them with no choice but to ‘limit’ treatment.

Dr Quartey said: ‘Marijuana can lead to increased anxiety, paranoia and hyperactivity, which could make the visit more stressful.

‘It can also increase heart rate and has unwanted respiratory side effects, which increases the risk of using local anesthetics for pain control.’

She added: ‘Plus, the best treatment options are always ones a dentist and patient decide on together. A clear head is essential for that.’

This year in the UK, 8.6 per cent of young people aged between 11 and 18 said they vaped either occasionally or regularly. This is a jump from four per cent in 2021.

Over the last few years, public awareness has increased about the dangers of vaping to systemic health – particularly after the use of vaping devices was tied to lung disease.

Dr Karina Irusa, assistant professor of comprehensive care at Tufts University School of Dental Medicine in Boston, US, and lead author on the study, said: ‘Some dental research has shown ties between e-cigarette use and increased markers for gum disease, and, separately, damage to the tooth’s enamel, its outer shell.

‘But relatively little emphasis has been placed on the intersection between e-cigarette use and oral health, even by dentists.’ The research team analysed the data from more than 13,000 patients over the age of 16 who were treated at Tufts dental clinics from 2019-2022.

The team found that while the vast majority of patients did not use vapes, there was a significant difference in the risk of cavities between those who used them and the control group.

The data revealed that 79 per cent of vaping patients had a high risk of suffering from cavities, while around only 60 per cent of the control group had a similar level of risk.

The vaping patients were not asked whether they used devices that contained nicotine or THC, although nicotine is more common.

The researchers recommend that people who vape should be given much more rigorous care to prevent cavities.

This could include prescription-strength fluoride toothpaste and fluoride rinse, in-office fluoride applications, and check-ups more often than twice a year.

Dr Irusa believes these new findings may be just a hint of the damage vaping causes to the mouth.

She said: ‘The extent of the effects on dental health, specifically on dental decay, are still relatively unknown. At this point, I’m just trying to raise awareness.’ She added: ‘It’s important to understand this is preliminary data.

‘This is not 100 per cent conclusive, but people do need to be aware of what we’re seeing.’

Dr Irusa and her team now want to take a closer look at how vaping affects the microbiology of saliva to further their research.

She said: ‘It takes a lot of investment of time and money to manage dental caries (the dental term for cavities), depending on how bad it gets.

‘Once you’ve started the habit, even if you get fillings, as long as you continue, you’re still at risk of secondary caries. It takes an aesthetic toll.

‘It’s a vicious cycle that will not stop.’ A previous study, published in the journal PLOS one, compared e-cigarettes to gummy sweets and acidic drinks.

It reported: ‘Certain e-liquid ingredients interact with hard tissues of the oral cavity in such a way that resembles high-sucrose candies and acidic drinks that adversely affect teeth.’

The current study was published in The Journal of the American Dental Association.