The CDC is investigating backyard chicken farms as the potential source of a multi-state salmonella outbreak that has resulted in over 200 cases and one death.

The agency unveiled a notice Thursday, warning people who have backyard farms to regular use hand sanitizer to protect themselves from the virus.

According to most recent figures from the Centers for Disease Control and Prevention (CDC), 219 cases have been detected across 38 states, resulting in 27 hospitalizations and one death.

Many chicken can carry germs that lead to infection with salmonella, which can cause intense sickness and even death in humans.

The infection causes around 400 deaths in the U.S. every year, but usually due to people undercooking infected chicken at home and getting infected.

The CDC is warning that Americans that have backyard chicken flocks are at risk of being infected with salmonella. More than 200 cases and one death have been tied to backyard flock transmission (file photo)

‘Do you have a backyard flock?’ the agency wrote on Twitter.

‘Quick tip: Keep a bottle of hand sanitizer at your coop! Many people across the U.S. have gotten sick with Salmonella from contact with backyard poultry, but you can stay healthy around your flock.’

The agency warns that flocks with chickens and ducks in particular can cause harm.

According to the American Pet Producers Association, around 10 million Americans had a backyard chicken farm in 2018, a figure that is trending upwards as well.

Many flocks have already been struck by a recent surge of the avian flu around the world, forcing many commercial and household to be culled to prevent spread of the devastating virus.

As a result, many were also told to limit interactions with their fowl to prevent bird-to-human transmission of the deadly virus.

While there was only one recorded case of the avian flu in humans, salmonella seems to have spread much more effectively.

The CDC warns that people suffering diarrhea, a fever of 102, dehydration or vomiting should seek out medical attention for potential salmonella infection.

Links between salmonella and chicken is commonly known. Many birds carry the bacteria, including poultry eaten safely by humans.

The bacteria is killed at temperatures that chicken is cooked at, making it safe to eat. 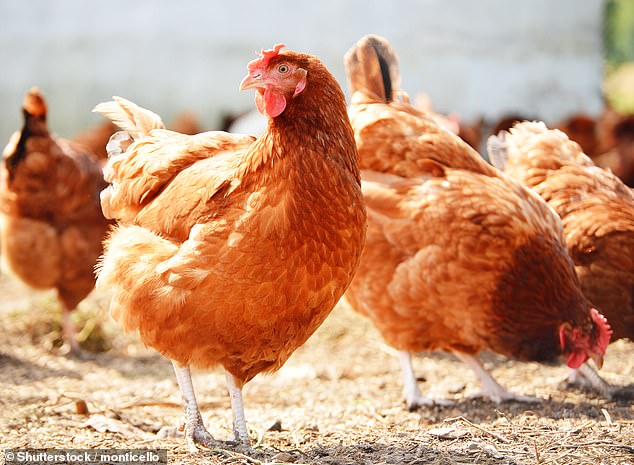 The CDC recommends that people wash their hands after interacting with their flock, and to monitor children to make sure they are safe around the animals (file photo)

People with backyard flocks are interacting with poultry in ways that many people do not, though – while the birds are still alive.

Many are interacting with them daily, and even treating them like pets the way someone would typically treat a dog or cat in their home.

‘Don’t kiss or snuggle backyard poultry, and don’t eat or drink around them. This can spread Salmonella germs to your mouth and make you sick,’ the CDC warns.

The agency also warns parents to watch out to make sure children are not interacting with backyard animals without washing their hands afterwards.

Officials also recommend regularly collecting eggs to prevent them from becoming dirty, and to throw put eggs that are cracked.