Baby girls who are born by C-section could be at higher risk of becoming obese and developing type 2 diabetes, study claims

Girls born by caesarean section face a greater risk of obesity and type 2 diabetes compared to those delivered by a natural birth, researchers claim.

Harvard University researchers found that women born by c-section face an 11 per cent higher risk of obesity and a 46 per cent greater risk of type 2 diabetes.

This could be due to differences in the type of microbes girls born naturally are exposed to in their mothers birth canal, the researchers say.

Findings applied not only to high risk caesarean births but also to mums in low risk groups and involved a study of 33,000 women aged between 24 and 44.

The Harvard team didn’t examine the impact c-sections have on men and can’t say whether the impact would be the same as it is for women.

Girls born by caesarean section face a greater risk of obesity and type 2 diabetes compared to those delivered by a natural birth, researchers claim. Stock image

Study author Jorge Chavarro, from Harvard T.H Chan School of Public Health in Boston, said they found there was a link between caesarean delivery and diabetes.

‘Whether these findings are applicable to men or to individuals born today, when caesarean delivery rates are substantially higher, is uncertain,’ he said.

Almost 37 per cent of women in the study were obese while around six per cent were diagnosed with type 2 diabetes during the study’s follow up period.

Authors say that this shows women born by caesarean are more likely to fall into the at-risk group for diabetes and obesity than those delivered by natural birth.

The reasons behind the development of obesity and type 2 diabetes in adulthood among those born by caesarean remain unclear, the team say.

However, growing evidence points to the hygiene theory and changes in the child’s gut bacteria from birth, according to the research team.

The Hygiene theory says that exposure to certain microbes in infancy and childhood protects the body against different conditions as you age.

Gut bacteria can modulate chronic inflammation and so changes in gut microbes can be linked with fat and glucose metabolism which is responsible for obesity and type 2 diabetes in adults.

Babies delivered through a natural birth are quickly colonised by microbes from their mother’s birth canal and faeces. 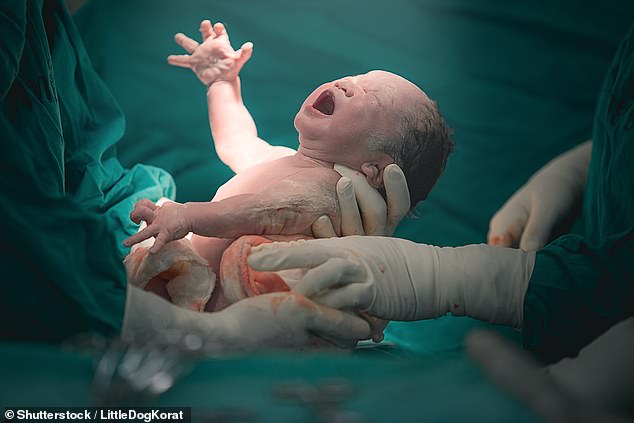 Newborn babies delivered by caesarean harbour less diverse gut bacteria, particularly those which have shown to be protective against obesity. Stock image

In contrast those born by caesarean are colonised by environmental microbes instead – not getting access to the wider variety of maternal microbes.

As a result, newborn babies delivered by caesarean harbour less diverse gut bacteria, particularly those which have shown to be protective against obesity.

It’s also not known whether these differences in microbes last long-term.

Differences in DNA between children born by caesarean delivery and those by a natural birth have also been suggested as a biological explanation underlying longterm health outcomes of caesarean delivery but the evidence is scarce.

Researchers say more evidence is needed to investigate whether babies born by caesarean are at higher risk of developing other adverse metabolic and cardiovascular conditions beyond obesity and diabetes.

Why are Cesarean sections risky?

Lawrence Impey, a consultant in Obstetrics and Fetal Medicine at Oxford’s John Radcliffe Hospital, says: ‘Should women have the right to choose a Caesarean section birth? It’s the six-million-dollar question.

‘However, the far greater concerns I have are to do with the risks of a Caesarean itself. Caesareans can cause a lot of harm for future pregnancies and that’s very difficult to get over to women who are interested in their current baby.

‘Not only that, but the simple fact that you’ve had one before can lead to maternal mortality or serious complications.

‘A high-profile example is Amanda Holden, whose story was all over the press a few years ago. [During her C-section to deliver daughter Hollie, doctors discovered her placenta was attached to her internal scar from her previous Caesarean and the actress almost died during the operation.]

‘The real challenge we have is to ensure that women have a better experience of birth overall. Part of this is working on much better education pre-labour and to improve the care in labour, with realistic expectations on all sides. Doctors and midwives, too, must work as closely together as possible. Poor working relationships between the two professions only lead to disasters.

‘But I would also note that NICE does not “expect” a doctor to do an operation they do not think is necessary — there is no part of healthcare where a woman (or a man) can insist on surgery that the surgeon does not think should be done.’