EXPRESS INFORMER > News & Politics > Baby died when he slipped down bed and was covered with duvet, inquest hears

Baby aged 13 months died when he slipped down bed and was covered with duvet while sleeping between his two parents, inquest hears

A 13-month-old baby died after slipping down the bed and becoming covered by the duvet while sleeping between his parents, an inquest has heard.

Ifan George Torlop was ‘blue in colour’ when his parents Alana Bailey and Samuel Torlop were woken up by their six-year-old son at their home in Heol Maes y Cerrig, Loughor, on August 2.

Ifan had been sleeping between them in the double bed, an inquest at Swansea Guildhall was told on Wednesday.

Mr Torlop was woken by Miss Bailey ‘screaming help me, help me’ after she noticed their son had ‘slipped down the bed, ‘was covered by the duvet’ and ‘didn’t seem right’, a coroner heard.

An ambulance was called and Mr Torlop had already begun CPR when neighbours, one of whom was a nurse, headed inside to try and help the infant.

One neighbour described seeing ‘a little boy motionless in the bed’ and when paramedics arrived they were unable to resuscitate him.

Ifan George Torlop (pictured) was ‘blue in colour’ when his parents Alana Bailey and Samuel Torlop were woken up by their six-year-old son at their home in Heol Maes y Cerrig, Loughor, on August 2

The inquest heard Ifan regularly slept in the double bed with his parents because he would not settle in his crib since suffering bronchiolitis in November 2019.

He spent two days at Morriston Hospital with the lower respiratory tract infection.

The evening before he died, his parents visited Mr Torlop’s father’s home and returned to Miss Bailey’s mother’s house, where she also lived and where the couple spent most of their time.

They had dinner and watched TV as Miss Bailey had ‘two small glasses of wine’ and Mr Torlop had ‘two bottles of beer’.

At around 10pm they heard Ifan stir on the baby monitor and Mr Torlop went upstairs to feed him and returned to watch TV before the couple went to bed at around 11.15pm.

South Wales Police detective constable Ian Wozencroft told the inquest officers were told Ifan had died when they arrived at the house.

He said: ‘After a call from the ambulance service police officers were deployed to the scene where a crime scene was identified and assessed.

‘They recovered a number of exhibits and officers activated their body-worn cameras. Voluntary urine samples were supplied and two baby bottles.’

‘Co-sleeping is known to be unsafe and we know health visitors had warned the parents about these dangers. There was no doubt that the child was cared for, clean, and brought up in a loving environment.’

Pathologist Dr Deryk James told the inquest there ‘are risks with bed sharing’ but there was ‘no evidence’ Ifan was laid on. 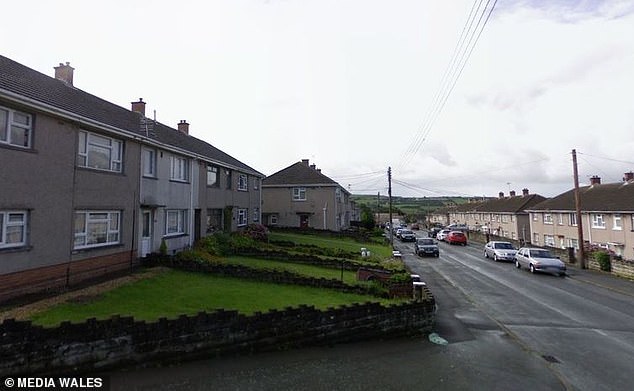 Mr Torlop was woken by Miss Bailey ‘screaming help me, help me’ after she noticed their son had ‘slipped down the bed, ‘was covered by the duvet’ and ‘didn’t seem right’, a coroner heard. Pictured, the street in Heol Maes y Cerrig where the family lived

Dr James said: ‘He was found in the middle of the bed but under the duvet. We know sudden infant deaths are more likely to happen when a baby is too warm or in a position that’s not ideal. If you are intoxicated you are less aware of the baby’s position.’

Recording an open conclusion, assistant coroner for Swansea and Neath Port Talbot Aled Wyn Gruffydd said while there was no evidence overlaying or an increased body temperature contributed to Ifan’s death he ‘can’t exclude it or say that it happened’.

He said: ‘Ifan was a fit and well boy. He was well cared for, appropriately nourished, and clean. His cause of death was unascertained and there was no evidence of overlaying. The consumption of alcohol is a risk when co-sleeping as you are less aware of your baby sleeping.

‘This is a tragic case and the parents’ worst nightmare. My deepest condolences go to them.’