Aerospace firm Babcock International has returned to the black after disastrous results last year, thanks to gaining several new deals with the Ministry of Defence (MoD).

The FTSE 250 firm made a £54.2million profit in the six months to 30 September against a massive £832.5million loss during the same time in 2020, as revenues grew across all its operations.

Revenues from its marine division grew 6 per cent due to work related to the Type 31 frigate and warships based in Devonport as well as growth in its liquefied gas business, which offset the impact from the loss of a Royal Navy training contract.

Sailing strong: Babcock International’s revenues across its marine division grew 6 per cent due to work related to the Type 31 frigate (pictured) and warships based in Devonport

At the same time, its nuclear division was boosted by submarine work and a £3.5billion deal it signed with the Royal Navy for its Future Maritime Support Programme.

Aided by the colossal deal, Backcock’s contract backlog was £10.9billion at the end of the reporting period, 16 per cent higher than at the same time last year.

This agreement runs until March 2026 and will involve the company looking after naval bases in Clyde and Devonport, and providing assistance to the UK submarine and surface ship fleet.

Since early October, further deals have been reached with the MoD to upgrade maritime electronic warfare technology and with the Australian Government to enhance the country’s defence communication system.

As well as new contract wins, Babcock made significant progress cutting its net debts, which declined by about £260million to £1.34billion, partly as a consequence of agreeing to sell three businesses during the period for around £400million. 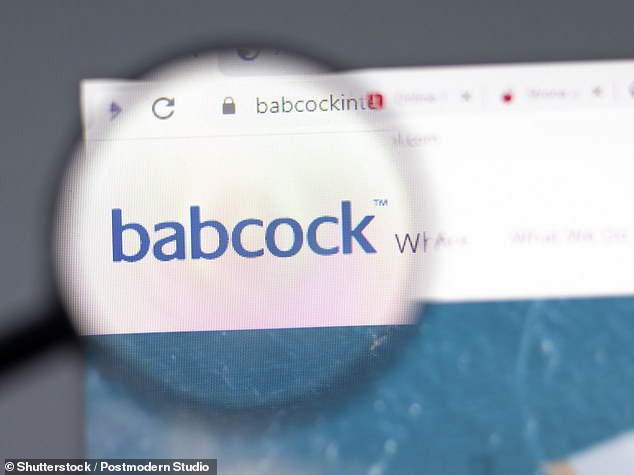 This included the £290million sale of its Frazer-Nash consultancy business to American aerospace group KBR, a £95million stake in joint venture AirTanker Holdings, and a small deal to offload its oil and gas aviation arm.

The company said that it was optimistic about its future prospects but, despite the strong rebound in trade, it warned that it forecasts free cash flow for this fiscal year to be ‘significantly’ negative.

This is due to costs related to its restructuring, higher pension contributions for staff, spending on upgrading its IT networks and facilities, and ‘the unwinding over time of the historical management of working capital around period ends.’

Chief executive David Lockwood said: ‘We will continue to align our portfolio to best support the Group’s capital allocation priorities and future growth. The ongoing implementation of our new operating model means Babcock will be a simplified, more focused Group.’

He added: ‘We remain cautious as we are early on in our transformation and as we manage inflationary and supply chain pressures across the business and potential interruptions from Covid-19.

‘However, the Board believes the actions we are taking will enable the Group to take advantage of the many opportunities ahead of us, leading to improved cash generation and profitability in the medium term.’

After rising in early trading, shares in Babcock International closed 1 per cent lower at 303.8p on Tuesday.