B2 stealth bomber worth $2BN crash lands on runway at Missouri air base after suffering in-flight malfunction: Six mile exclusion and no-fly zone set up

By Andrea Blanco For Dailymail.Com

A B2 Spirit stealth bomber, one of the most deadly weapons in the United States’ military arsenal and worth $2billion, was damaged after an emergency landing at Whiteman Air Force Base in Missouri today.

Nobody was injured and there was no fire once the bomber landed.

The incident involving the B2 happened around 12.30am and unfolded in a temporary flight restriction six miles in all directions and 8,000ft from the ground up.

Only 21 B2 bombers have ever been manufactured, and there are only 20 remaining after one crashed in Guam in 2008.

It is not know yet to what degree the B2 bomber at Whiteman Base sustained damage.

A B2 Spirit stealth bomber was damaged after an emergency landing at Whiteman Air Force Base in Missouri today. File picture

The incident involving the B2 happened around 12.30am at Whiteman’s Base only runway 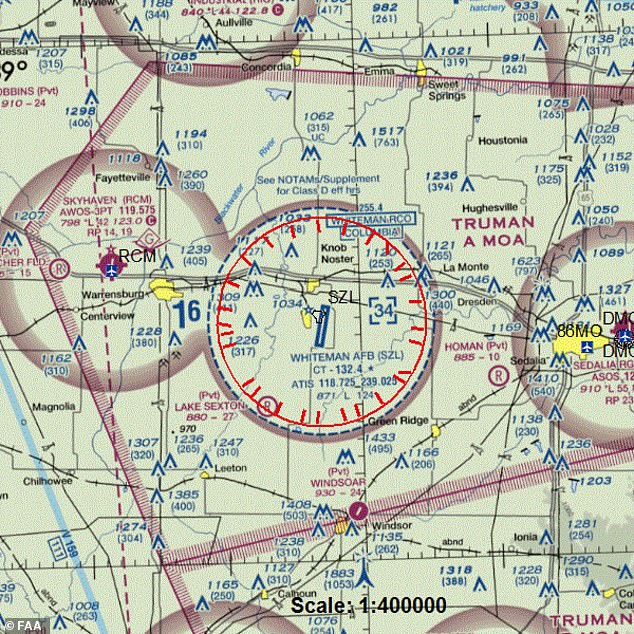 A temporary flight restriction six miles in all directions and 8,000ft from the ground up has been issued

‘A U.S. Air Force B-2 Spirit experienced and [sic] in-flight malfunction during a routine training mission and was damaged on the runway at Whiteman Air Force Base, Missouri, after an emergency landing,’ said Air Force Global Strike Command to The Drive.

The B2 is manufactured with materials that could become highly toxic if exposed to an accident, the outlet reported.

Spanning an imposing 170 feet and capable of unleashing awesome destruction, the B2 Spirit aircraft are capable of carrying either conventional or nuclear warheads.

The model was developed under the Advanced Technology Bomber during Jimmy Carter’s administration.

The only crash reported of a B2 bomber happened in 2008, when one aircraft of the model was departing from Guam.

At the time of the crash no munitions were on board and the two pilots survived the accident. All remaining 20 B2 were kept from flying for almost two months until an investigation was conducted.

It was found that the crash had been caused by heavy rains that affected sensors in charge of calculating speed and altitude. 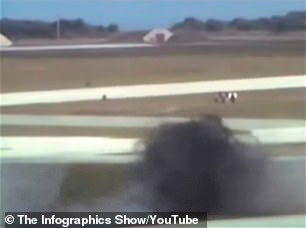 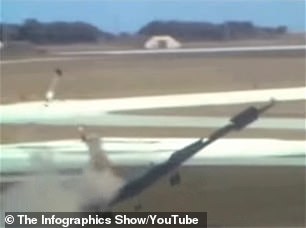 The only crash reported of a B2 bomber happened in 2008, when one aircraft of the model was departing from Guam. It was found that the crash had been caused by heavy rains that affected sensors in charge of calculating speed and altitude

B-2 SPIRIT: MOST EXPENSIVE AIRCRAFT EVER, BUILT TO DROP ARMAGEDDON ON THE SOVIETS

The B-2 Spirit is the U.S. Air Force’s deadliest and most expensive plane – a Cold Warrior’s invention which has since been used to bomb the Taliban and ISIS.

On board its flight crew of two can stay in the air for 33 hours, at the controls of a plane designed to sneak into Soviet territory unseen to drop nuclear bombs, then return to the U.S. in a single flight.

The B-2s were first designed under the Carter administration, came close to being canceled, and finally took flight for the first time in 1989, just as the Soviet Union they were supposed to fight was collapsing, entering Air Force service in 1997.

They have been used to fight in Kosovo, where they bombed Serbian forces as NATO moved in to counter ethnic cleansing of the Muslim Albanian minority, and in the war on terror, taking out Taliban targets in Afghanistan and most recently ISIS positions in Syria.

All are currently based at Whiteman Air Force Base in Missouri, meaning that the one designated to fly over the Mall is flying 1,042miles to D.C. for the spectacle.

If it flies low enough it will be visible from the ground, but it is almost invisible on radar, with its stealth design making it look like a pigeon on radar screens.

The B2 Spirit stealth bomber was designed during the Cold War as the world’s first ever ‘low-observable or ‘stealth’ strategic bomber.’

It can deliver both conventional and nuclear ammunition, and brings massive firepower to bear anywhere on the globe through previously impenetrable defenses, according to Military.com

Because of its small size, it’s an strategic weapon to filter and penetrate air defenses.

Many details about the B2 design remain classified and have not been revealed to the public, but it is known that the model has a crew of two pilots.