Reece Howden of Cultus Lake, B.C., did one better from his silver-medal performance on Sunday, capturing ski cross gold a day later in Val Thorens, France.

The 22-year-old made some adjustments from Sunday’s effort in defeating Ryan Regez of Switzerland.

“Today I had an awesome day, it was a lot of fun,” Howden told Alpine Canada. “I was able to achieve a goal I set for myself a long time ago. Hard work pays off.”

Howden, who will enter 2021 as the World Cup leader, has been able to devote more time to skiing this season after graduating from the Southern Alberta Institute of Technology in the spring. “I’ve got a lot more skiing in this year after finishing a diploma in May, and I’m super stoked it’s paying off.”

For Thompson, it was the 28-year-old’s second bronze medal in as many days.

“Today I tried to be a bit faster on my starts, still ended up having to make a few moves and some pretty good passing,” the Whistler, B.C., athlete said. “I’m really happy with how I skied today, and I’m really excited for a break.” 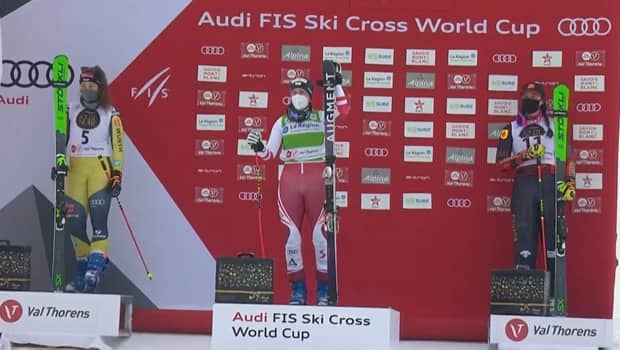 Ottawa’s Hannah Schmidt, who is returning from injury, had a personal-best 12th-place on Monday in her return from injury.

The Canadian squad will return to World Cup competition Jan. 15 in Montafon, Austria.