Rising inflation and low interest rates have combined to decimate the savings Britons have stashed away, new research has revealed.

Savers have typically lost more than £1,000 in real terms over the past five years thanks to inflation, according to a study by the comparison site Finder.

It found that typical easy-access savings accounts have lost 13.5 per cent of their value versus inflation since this time in 2017.

The average Briton currently has around £7,500 in savings, according to Finder.

Someone who saved £7,500 in June 2017 in easy-access savings would typically discover that their pot is worth £1,012 less today in real terms.

This is because, even though the £7,500 might have risen thanks to interest earned, the purchasing power will in fact have decreased overall, due to rising prices.

Inflation reached 9.4 per cent in the 12 months leading up to June, the highest it has been for 40 years, and the Bank of England is expecting it to peak around 11 per cent in the autumn.

There is not one savings deal that currently beats inflation and, according to Finder, rising prices have outstripped the average savings rate for each of the past five years.

However, it is this year in particular, where peoples’ savings are being most impacted due to the rampant inflation rate compared to the average easy-access savings rate of just 0.59 per cent.

The best easy-access deal currently pays 1.6 per cent. However, this is almost six times lower than the current inflation rate of 9.4 per cent.

Someone saving in such an account could still expect to see the value of their savings pot in real terms fall by £585. 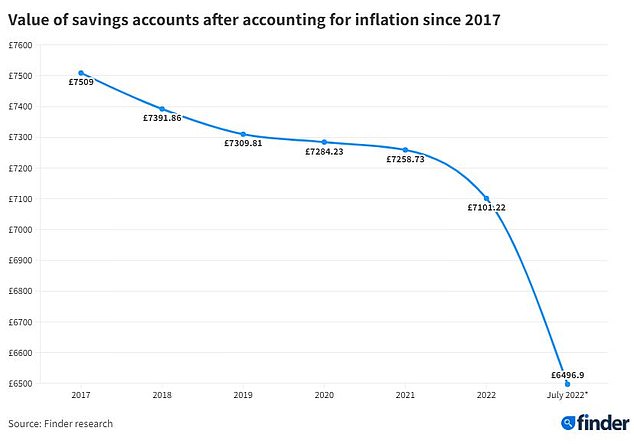 Savers can get better protection by moving their cash to a fixed rate savings deal – albeit this means surrendering their ability to access their money as and when they wish – at least for a period of time.

The best fixed rate savings deals now pay twice as much as they did a year ago, according to Moneyfacts.

This is because the interest rates for savings accounts have dropped significantly since 2008. 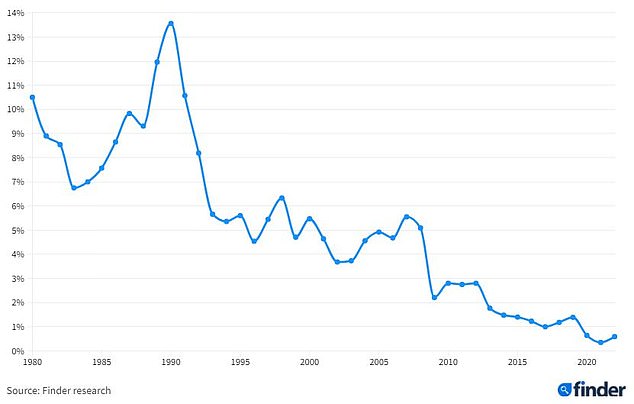 Savings have dropped significantly since before 2009: Between 1980 and 2008, interest rates did not drop below 3 per cent. However, since 2009, they have not reached that figure.

Michelle Stevens, banking expert at Finder, said: ‘The fact that savings accounts are currently losing people a lot of money in real terms is yet another worrying outcome from the cost of living crisis.

‘They are still a prudent choice for many consumers given the security they offer and the fact that they do still earn you interest, however it may not be a sustainable option for many if inflation doesn’t start to come down soon.’

Panicked savers may consider resorting to the stock market and other forms of investing to try and bridge the gap – but this, according to Stevens, may only result in further pain – at least in the short-term.

‘The bear market – that many predict will get worse – isn’t inspiring confidence in choices like investing or cryptocurrency either.

‘The potential to get inflation-beating returns also comes with the possibility of losing some or all of your money.’ 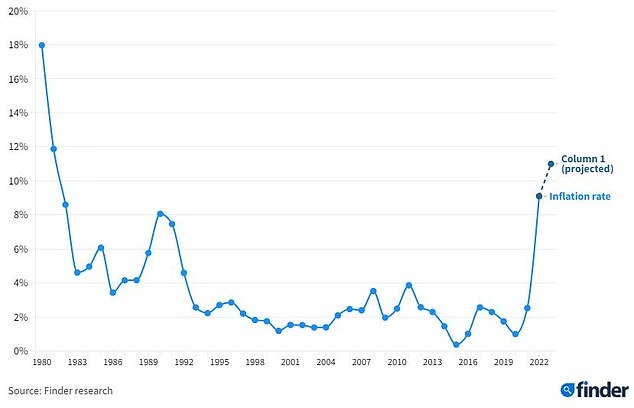 Inflation as of June 2022 is almost 16 times higher than the average saving account rate, according to finder.

Stevens suggests that savers consider adding to their pensions, or if under 40, using a Lifetime Isa both of which come with tax boosts.

However, Lisa customers cannot spend the money until they reach 60 unless they use it to buy your first property worth up to £450,000. After age 60, they can spend it as they want.

Stevens adds: ‘One option to protect your money, for those under 40, is to get a Lifetime Isa.

‘A Lifetime Isa offers a guaranteed 25 per cent return – up to £1,000 per year – but it must only be used to buy a first property or taken out after reaching 60 or you will forfeit the interest on the account.

‘Also, putting more into your pension pot could be another option as you get employer contributions and tax relief from the government.’