The Skye’s the limit! Britain’s rarest bird might prove elusive, but the historic isle where it can be found is a soaring triumph

By James Macmanus For The Daily Mail

The dream of seeing a White-tailed eagle, Britain’s largest and rarest bird, aloft over the mountains of Skye has been with me since I camped on the island years ago on a school trip.

With a wingspan of up to 8ft, the bird presents a sight so magnificent that birdwatchers from all over the country are drawn to Skye and the nearby islands of Mull and Rum. I am not a birdwatcher, but rather a writer who has placed the bird at the start of a new novel. Now I have to see one.

First, I meet up with Mark Finn, who runs a bird tour business in Scotland. If anyone can find me a sea eagle, as the bird is also called, it’s him.

History has been kind to Skye, cloaking it in the romance of Bonnie Prince Charlie and his flight from the English redcoats after the 1745 Jacobite rebellion.

As we drive 30 miles to the capital, Portree, Mark explains how farmers and gamekeepers had hunted white-tailed eagles to extinction. The last one was shot in 1916. Then breeding pairs were reintroduced from Norway and now there are roughly ten pairs on the island.

‘You will know a white-tailed eagle when you see one,’ Mark assures me. There are plenty of rare birds to be seen on Skye – an occasional shorebird brought on strong winds from North America, or Grey Phalaropes blown in from Russia. We see our share. 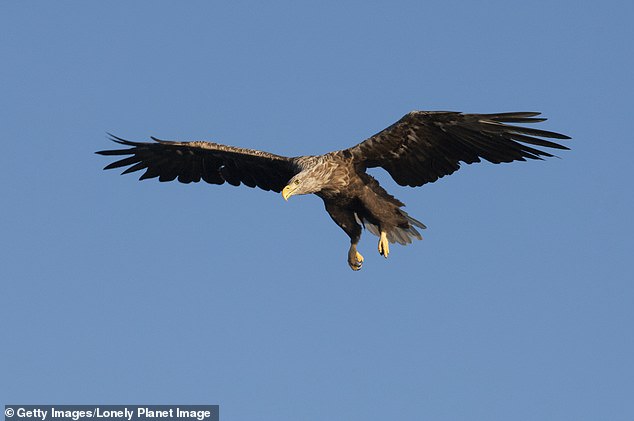 But for all its majestic presence in the sky, the white-tailed eagle stays out of sight.

The Cuillin Mountains run like a rumpled rug along the centre of the island rising to 3,000ft in places. This is white-tailed eagle territory, where the birds will nest and raise their young in spring.

For £25 a head, a small boat takes us from Portree’s pretty harbour to the sheltering cliffs that shield the town from storms. It’s not nesting season, but eagles like to hunt from these grey fortresses.

We see golden eagles and every kind of sea bird – but not so much as a feather of the white-tailed eagle. The Royal Hotel in Portree is full of Chinese tourists that night. They have come to pursue the myth of Prince Charlie’s buried treasure. Somewhere on Skye the man born to be king had hidden gold before fleeing to exile in France. 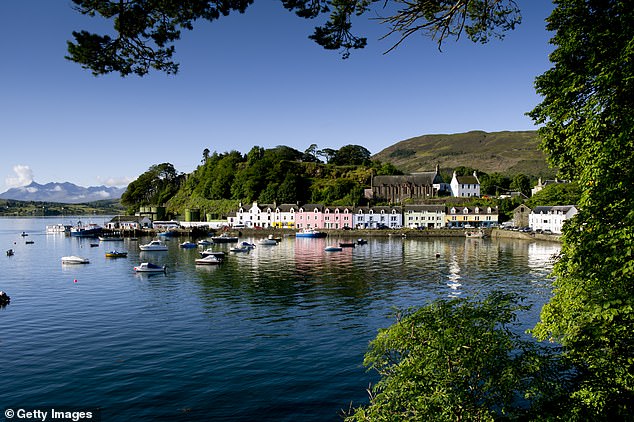 The pastel-coloured houses of Skye’s capital, the small port town of Portree

Chinese culture is full of such fables, which is why Skye is such a popular destination on the oriental tourist trail.

Perhaps the bird is just another of the many myths that cling like sea mist to the island’s mountains and lochs. Mark assures me we have just been unlucky.

One day I’ll see my white-tailed eagle – but to search for it on Skye is almost pleasure enough.

James MacManus’s novel, The Woman With Wings, it out now by Endeavour Quill at £7.99.