Queenslanders are facing power outages as electricity generators dial back their output in response to a cap on wholesale prices, which quadrupled in a year.

The Australian Energy Market Operator (AEMO) has issued an alert warning of possible blackouts for the south-east of Queensland and the east coast between 5.30pm and 8pm on Monday, and again on Tuesday morning.

Residents have been urged to turn down heaters and switch off household appliances to conserve power.

Pictured is a high voltage electricity transmission tower is seen in the foreground of the Brisbane CBD skyline in Brisbane, Thursday, June 2, 2022. Queenslanders could have power outages on Monday night and Tuesday morning

The operator has imposed a cap on electricity spot prices of $300 per megawatt after seven consecutive days of surging wholesale prices.

‘As a consequence of the administered price cap in Queensland, AEMO has seen generation bids reduce,’ the company said in a statement.

The operator said with a lack of reserve electricity in the system, demand could exceed supply in parts of Queensland connected to the National Energy Market (NEM) from early Monday evening. 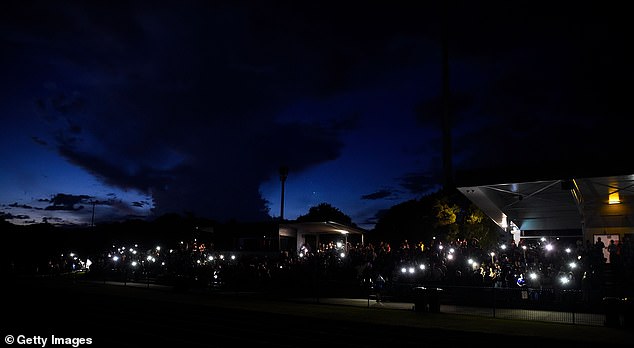 Pictured is a power outage before the start of the NRL trial match between the North Queensland Cowboys and the Wests Tigers at Barlow Park on February 17, 2018 in Cairns, Queensland

‘AEMO will continue to monitor reserve conditions closely in Queensland, NSW and more broadly across the NEM, providing further updates should conditions change.’

The market operator said it would monitor Queensland’s wholesale spot prices, which have quadrupled in the year to March.

The Australian Energy Regulator said earlier this month the state’s wholesale prices, which are the highest in the nation, are unlikely to fall before 2024.

Powerlink Queensland Chief Executive Paul Simshauser urged people to cut back on electric use wherever they can.

‘There is an unusual combination of unexpected generator outages plus cool winter temperatures and high demand for electricity,’ he said.

Residents should heat only one room where possible and turn off appliances, pool pumps and electronics on standby mode.

Retailers have been asked to cut back on lighting, advertising displays and water heating systems.

‘By carefully managing electricity use at home and in your workplace, the community can help ensure that power system security is maintained in Queensland,’ Mr Simshauser said.

Part of the problem for Queensland is that 70 per cent of its generation comes from fossil fuels, and generators are suspected of bidding higher to profit from surging international coal and gas prices.

Energy Minister Mick de Brenni has denied Stanwell and C S Energy are price gouging, saying they only bid to ‘cover costs’ and that he won’t direct them to lower their bids.

‘Queenslanders have conserved energy in situations like this before … I’m confident Queenslanders will be able to do it again.’

‘Queensland already has the highest power prices in the country and now we’re being warned that the lights may not even stay on,’ Mr Weir said.

‘Major employers are tonight shutting down and Queenslanders’ lifestyles are being impacted because of a government that has failed to plan for the future.’

Households will get about $44 off their monthly power bills from July under a one-off Queensland government rebate, with bills set to rise by at least $41 to $55.

Analysts have told AAP the AER will likely have to allow Queensland household and business bills to rise again before the end of 2022/23.