The Flinders Ranges, south-west Western Australia and the Gippsland region of Victoria are Australia’s most earthquake-prone areas, with several worrying tremors in recent years.

A map of Australia’s quake hotspots shows areas dotted all across the country, but many are thankfully in remote areas meaning little chance of loss of life or destruction of property.

Wednesday’s 5.9 magnitude earthquake, which shook Victoria and parts of eastern Australia, happened on one of the state’s deepest faults – the Governor Fault.

Millions are now bracing for aftershocks, which have the potential to be just as strong as the original tremor, lasting for days or even weeks – with six smaller shocks recorded later on Wednesday ranging from 2.1 to 4.1 in magnitude.

The quake struck at 9.15am near the small town of Mansfield 180km north-east of Melbourne and temporarily knocked out power for 35,000 homes and businesses.

It demolished part of a Betty’s Burgers restaurant on Melbourne’s famous Chapel Street, with emergency service chiefs warning further tremors could hit the state for weeks or even months to come.

While uncommon, Australia has experienced a number of major earthquake events (pictured) with the most deadly being in December 1989 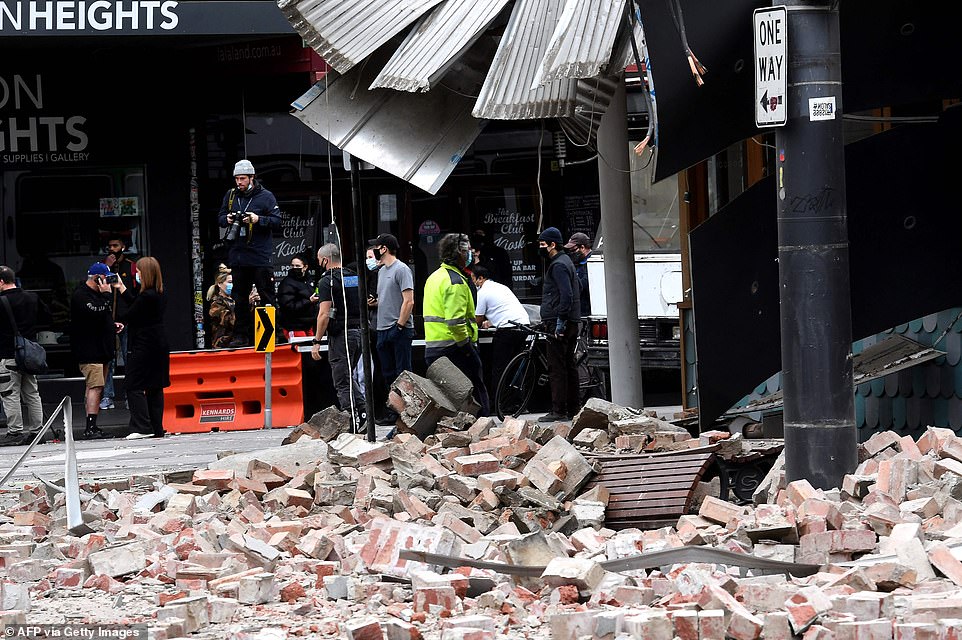 The tremor was felt all across the state, with reports of it as far away as Adelaide, Sydney, Tasmania and Canberra.

The quake was caused by a thrust fault where two sections of the earth’s crust are pushed up against each other, causing friction and resulting in a quake.

Seismologist have predicted aftershocks of up to magnitude five.

A 2018 Geosciences Australia hazard report noted three areas in Australia that were most prone to earthquakes – the Gippsland region, south-west Western Australia and the Flinders Ranges in South Australia.

Australia’s strongest recorded earthquake occurred in Meeberrie, WA in 1941 measuring at 6.8 on the Richter scale but cased little damage due to its remote location.

Another of the biggest was a 1988 quake at Tennant Creek in the Northern Territory, with an estimated magnitude of 6.6, according to Geoscience Australia. 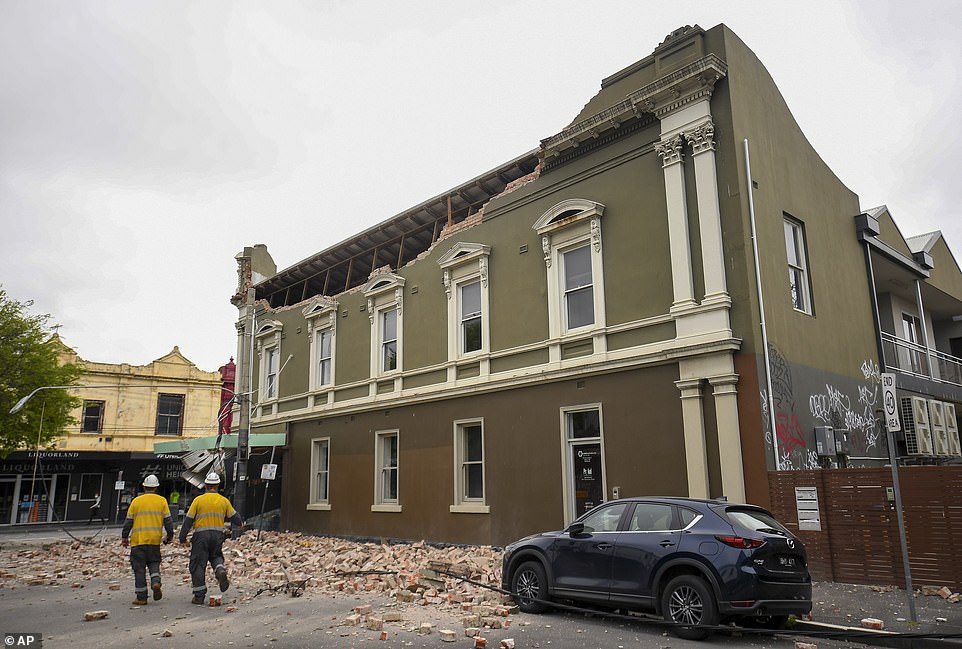 A 5.9 magnitude earthquake was recorded in Victoria on Wednesday morning with damage cased to infrastructure around Melbourne (pictured) 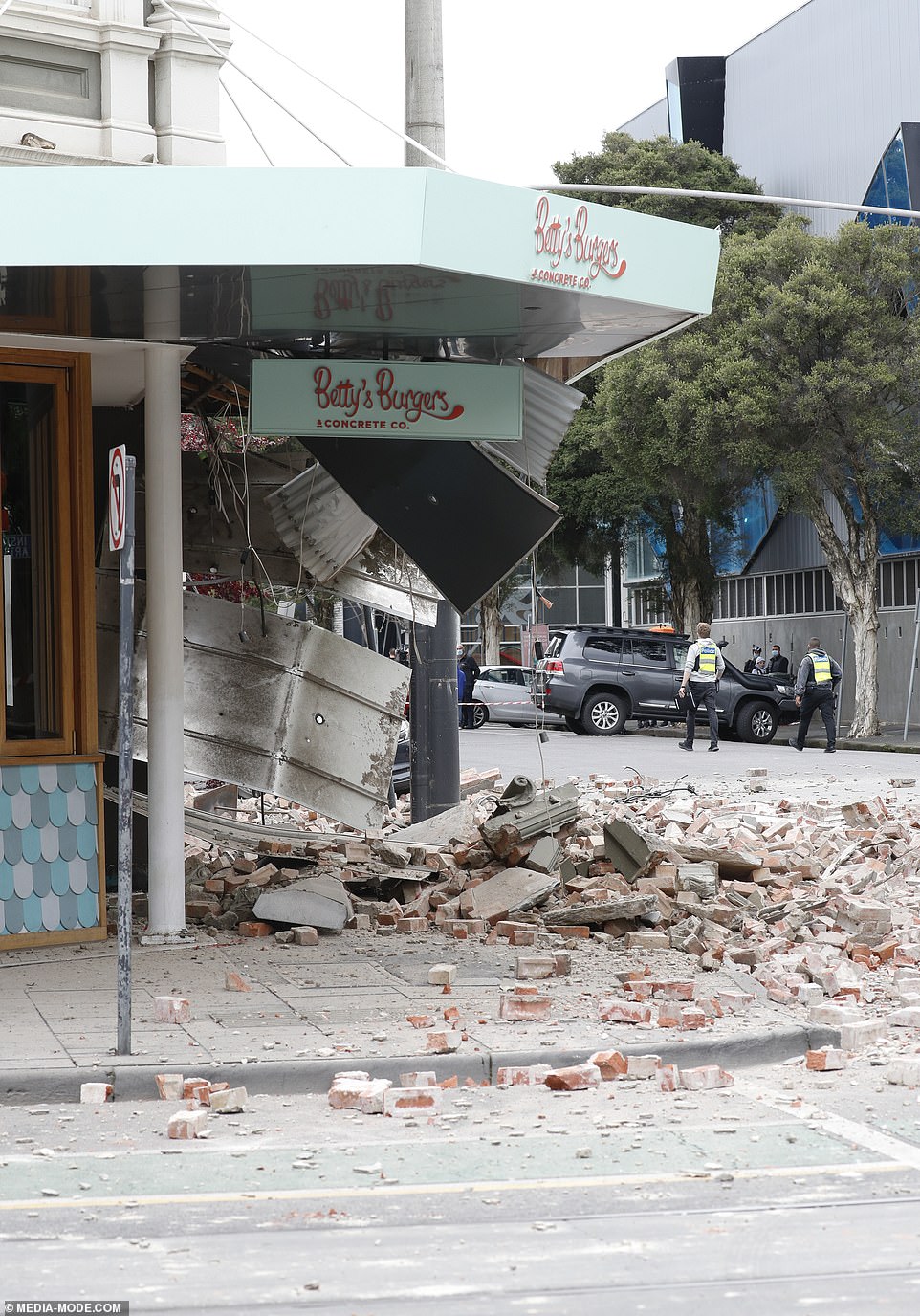 Seismologists said aftershocks could be a small few or thousands after the main tremor (pictured earthquake damage on Chapel St, Melbourne)

Lake George, NSW – sits on a 75km long fault line. Deemed to have the potential to be highly destructive due to its proximity to Canberra according to 2018 Geoscience Australia report

South-west Western Australia – contains Darling Fault line that extends for nearly 1000km north from Albany, one of the largest in Australia. Earthquakes in this region tend to be shallow and occur to the east of the fault line. One of Australia’s biggest ever quakes occurred at Meckerling, 130km east of Perth, in October 1968

Flinders Ranges, SA – has experienced more than 1600 seismic events since 2000 and is second to south-west WA for earthquake potential

Gippsland, VIC – Wednesday’s earthquake was the largest to hit the Gippsland in a succession in recent years. Others measured less than 3.4 since 2014

Northern Territory – experienced a series of three strong earthquakes at Tennant Creek in 1998, followed by hundreds of aftershocks. Another struck in 2016 in the Petermann Ranges, southwest of Alice Springs.

Queensland Coast and Hinterland – are most earthquake prone spots in QLD. Quakes struck Gayndah in 1883 and 1935, measuring 5.9 and 6.1 respectively, and an offshore quake measuring 6.3 caused damage to Rockhampton, Bundaberg and Gladstone in 1918

Launceston, TAS – experienced 10-30 second tremor in 1929 and a series of quakes near Flinders Island in the late 1800s

While Australia has fewer earthquakes than other parts of the world on major fault lines, scientist say this earthquake was a normal geological process and about 100 earthquakes measuring over 3 on the Richter scale occur on Australian ground each year.

This is due to Australia sitting in the middle of the Indo-Australian tectonic plate.

Earthquakes occur when tectonic plates move against each other so being in the middle of one means Australia doesn’t experience as many major earthquake events.

While close in proximity, New Zealand sits on the edge of the tectonic plate on a fault line called the Pacific Ring of Fire that spans 40,000 km around the Pacific Ocean and is known for active volcanoes and earthquakes. 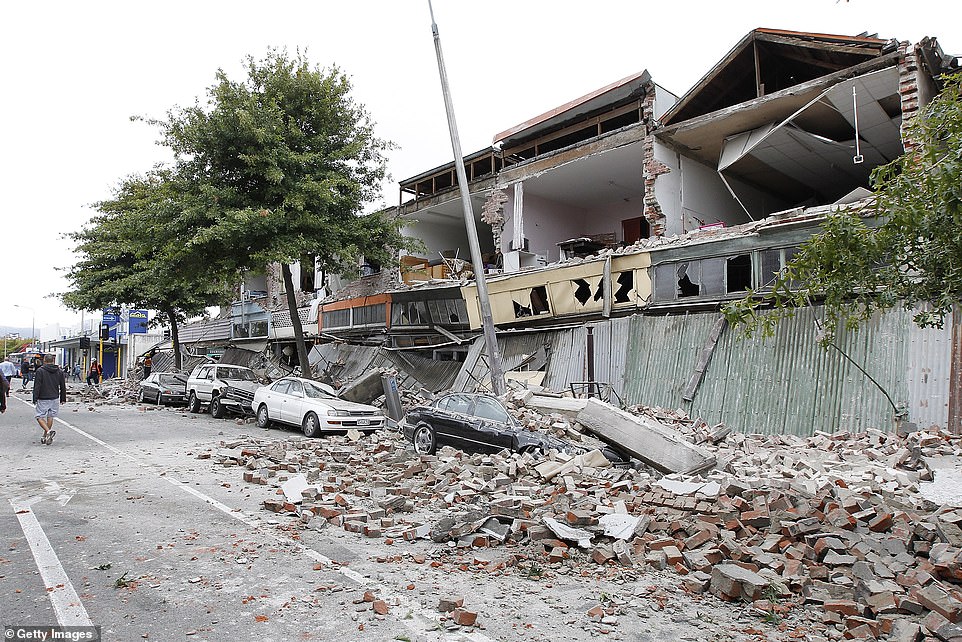 New Zealand experiences more frequent and intense quakes than Australia due to its position of the Pacific Ring of Fire on a major fault line (pictured damage in Christchurch following 2011 magnitude 6.3 earthquake)

This is why New Zealand experiences more frequent and intense earthquake events than Australia such as the 2011 Christchurch earthquake measuring a magnitude of 6.2.

The most destructive earthquake Australia has experienced measured 5.6 on the Richter scale. It occurred on the morning of December 28, 1989 in the Newcastle region.

Thirteen people died because of the tremor, 160 people were injured, 50,000 buildings were damaged and 300 had to be demolished.

Seismologist Dr Gary Gibson told Daily Mail Australia the 5.9 quake was not as deadly as the 5.6 shake in Newcastle in 1989 because it struck a long way from densely populated areas.

Dr Gibson said Victoria’s earthquake was centred between Licola and the town of Woods Point, around 250km east of Chapel Street Melbourne – where the most significant damage happened. 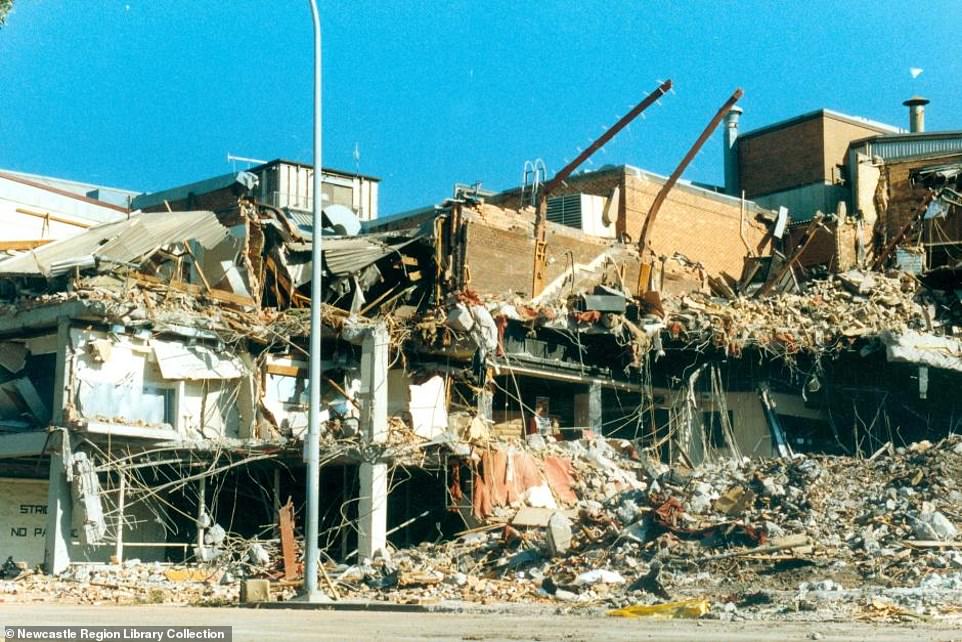 Australia’s most deadly earthquake occurred in December 1989 in Newcastle that left 13 people dead, 160 injured and damaged 50,000 buildings with 300 having to be demolished (pictured damage to Newcastle Workers’ Club in 1989 earthquake)

He said ground buildings on Chapel Street could have caused loss of life had the popular cafe strip been busy.

‘The Newcastle quake was 12km deep, 20km from the city and the fault ran in the right direction to focus a very strong motion towards the city,’ Dr Gibson, from the University of Melbourne, said.

The NSW town was also badly affected because of construction on ‘soft sediments instead of hard rock, which amplified the motion of the quake’.

‘This latest quake was in the most remote area of Eastern Highlands of Victoria.’ 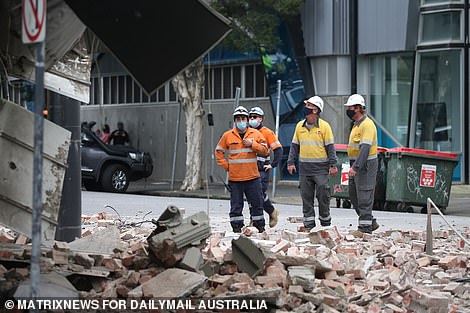 It is unlikely Australia will see major quake events measuring 8 or 9 due to the lack of large and active fault lines (pictured workers survey damage on Chapel St, Melbourne)

The quake hit at 9.15am hundreds of kilometres north-east of Melbourne. It was believed to be 10km deep.

It was followed by two 4.0 and 3.1 magnitude aftershocks 18 and 39 minutes later – both within 10km of the original tremors.

Dr Gibson said the quake, at 10km deep, was ‘quite shallow’ and capable of causing a lot of damage at its epicentre.

Given the unexpected damage done on Melbourne’s iconic Chapel Street, Mr Gibson believes it is lucky no loss of life occurred.

‘Considering the damage done there if people had been there at the wrong time things could have been very serious,’ he said.

News Breakfast presenters have had two very different responses to an earthquake that hit the ABC’s Melbourne studio.

The magnitude 5.8 quake was felt across Melbourne at 9.15am on Wednesday, with residents reporting feeling strong tremors for 30 seconds.

Presenters Michael Rowland and Tony Armstrong were forced to stop mid-program when the studio began to shake.

‘Is it an earthquake or a structural thing?’ a concerned Mr Rowland is heard asking.

The anxious presenter grabbed his phone and prepared to leave the studio as his smiling co-host remained seemingly unbothered by the tremors. 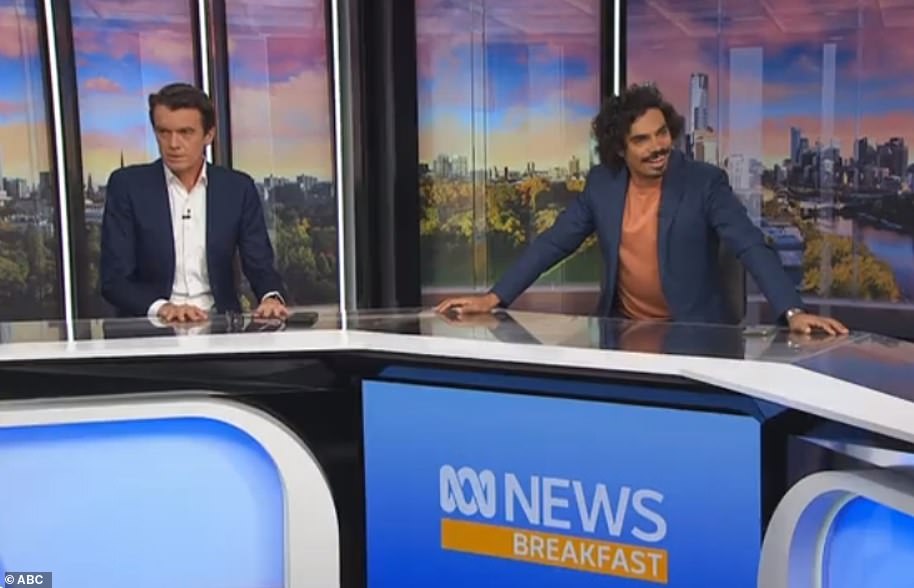 Twitter users were quick to poke fun at the pair with many comparing the hosts’ polar-opposite reactions to the large earthquake.

‘Let’s go!’ What a bad ass reaction from Michael!’ one user said.

‘For fans of Tony, all we see is him holding down that desk and saving the building,’ another woman tweeted.

‘He was cool, calm and collected. As always,’ a third agreed.

Mr Rowland tagged his co-host in a post to social media following the quake tweeting: ‘That was quite a post-show chat with @Tonaaayy_.’