Skyrocketing Pilates bills, ‘jaw-dropping’ grocery costs and a vow to buy fewer pairs of shoes – this is how locals in one of Australia’s most affluent suburbs are grappling with the cost of living crisis.

Residents in the Sydney eastern suburb of Double Bay – sometimes known as ‘Double Pay’ because of its wealthy demographic and high prices – have shared with Daily Mail Australia how they’re dealing with inflation.

Inflation jumped by 7 per cent in the year to July, the fastest pace since December 1990, with supply chain issues, widespread flooding and the war in Ukraine driving up prices.

Grocery and utility bills are surging as the Federal government’s fuel excise relief came to an end this week – sending petrol prices jumping by around 22c per litre – while interest rates continue to climb.

The Reserve Bank of Australia is expected to announce its sixth consecutive monthly rate hike today, with a predicted 0.5 percentage point rise.

This would take the cash rate to a nine-year high of 2.85 per cent – up from a record-low of 0.1 per cent as recently as May.

The futures market is expecting rates will hit 4.1 per cent by May next year.

While many low-paid Australians struggle to make ends meet, Double Bay locals – a suburb which has a median weekly household income of $2,478 – say they too are feeling the crunch. 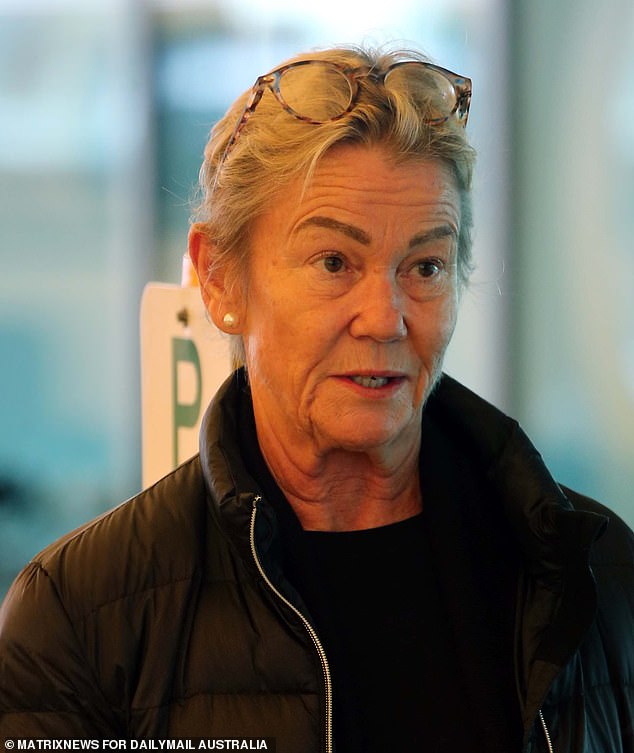 ‘I live on my own, so I am very conscious of making sure things are turned off,’ she said.

‘My ex-husband, he lives in Pymble and his electricity bill was $1,000 because there has been so much rain so he leaves the heaters on so that the mould doesn’t come back.’

The 68-year-old said she will often travel to Redfern, in the city’s inner-west, to capitalise on the suburb’s cheaper petrol prices and that many of her friends have been using apps to find the cheapest bowsers nearby.

She has also noticed businesses have been jacking up the prices of services, including her gym where she does Pilates three times a week.

‘And they told me it was because they were losing staff because they couldn’t get to work. It is called a bus. If she wants to get an Uber, that is not my problem.’

Although remaining budget conscious, Deborah said she is doing OK compared to other people and has noticed a general ‘apathy and depression’ among Australians amid the rising cost of living.

Deborah said grocery prices in Sydney’s eastern suburbs were more expensive than other lower-earning areas of the city. 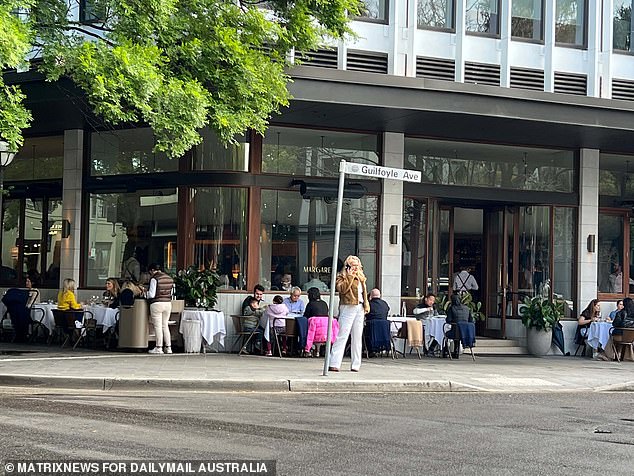 Double Bay, a harbourside suburb in Sydney’s east, has a median weekly household income of $2,478 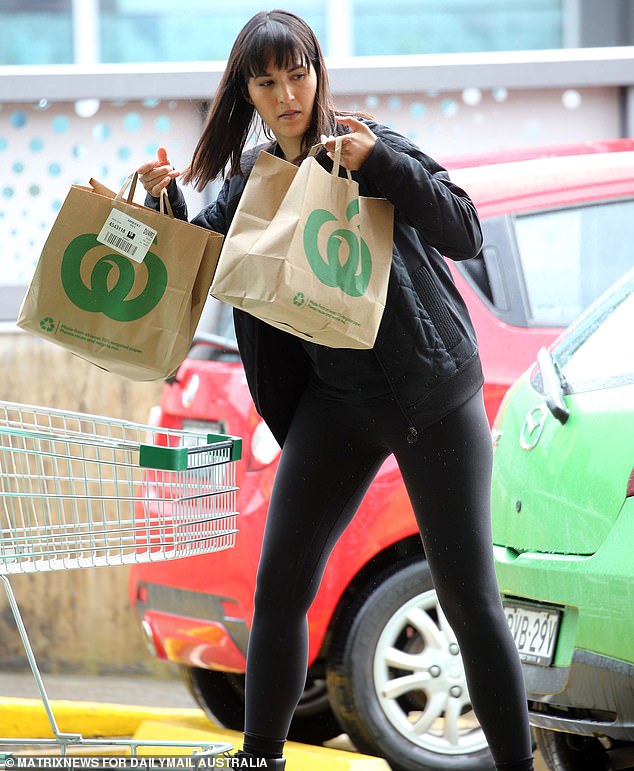 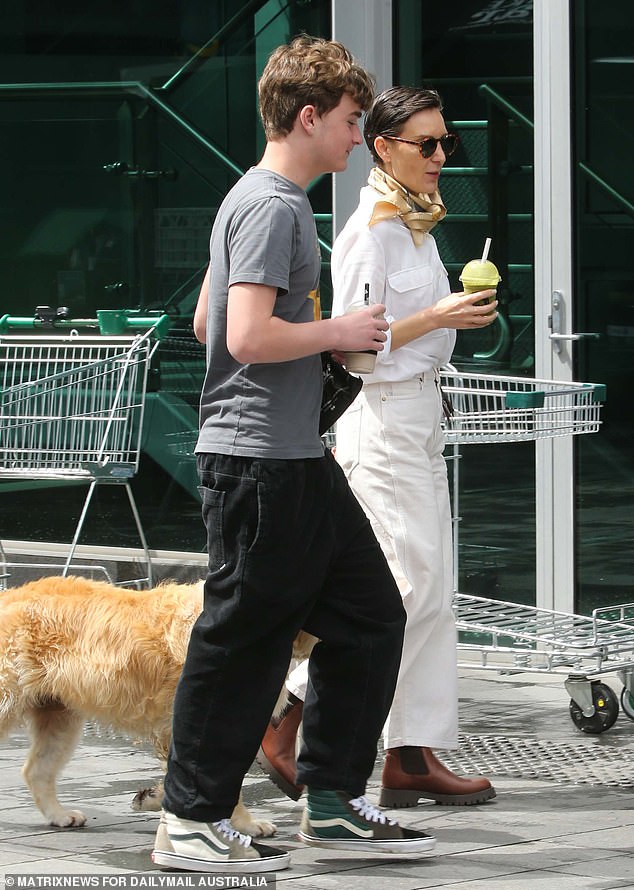 One woman, who wished to not be named, said that she had recently felt the impact of rising petrol prices

She said she has seen people’s ‘jaws drop’ when they visit from western Sydney, with some recently telling her they would never do their supermarket shopping in Double Bay due to the inflated prices.

However, she believes younger generations could get on top of their finances if they made lifestyle changes, like cutting down on takeaway food, refraining from buying excessively and picking up extra work.

‘I think people really have to start watching their diet,’ Deborah said.

‘How many delivery drivers do you see driving around? They are a pain in the a***. But why? Because people won’t cook. They are lazy. My neighbour UberEats his coffee.

‘And people are now buying ready-made meals. If you don’t have time to cook – it’s called making time.’

Deborah said she was sick of hearing that younger generations are struggling to save up a deposit to secure their first home – and that there is no excuse.

‘If I hear my ex-husband say one more time “Young kids will never be able to afford a home” – no. It is because every time there is a new phone [or electronic device] they are around the block [waiting to buy it],’ she said. 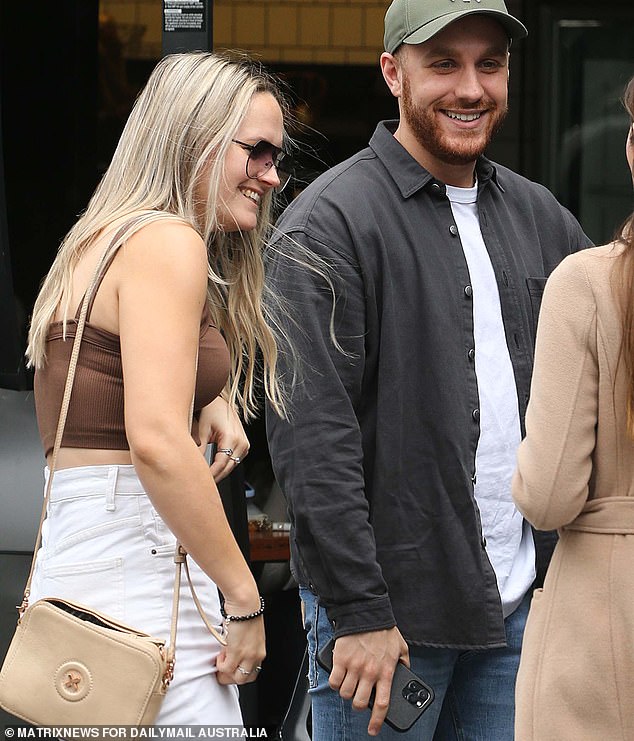 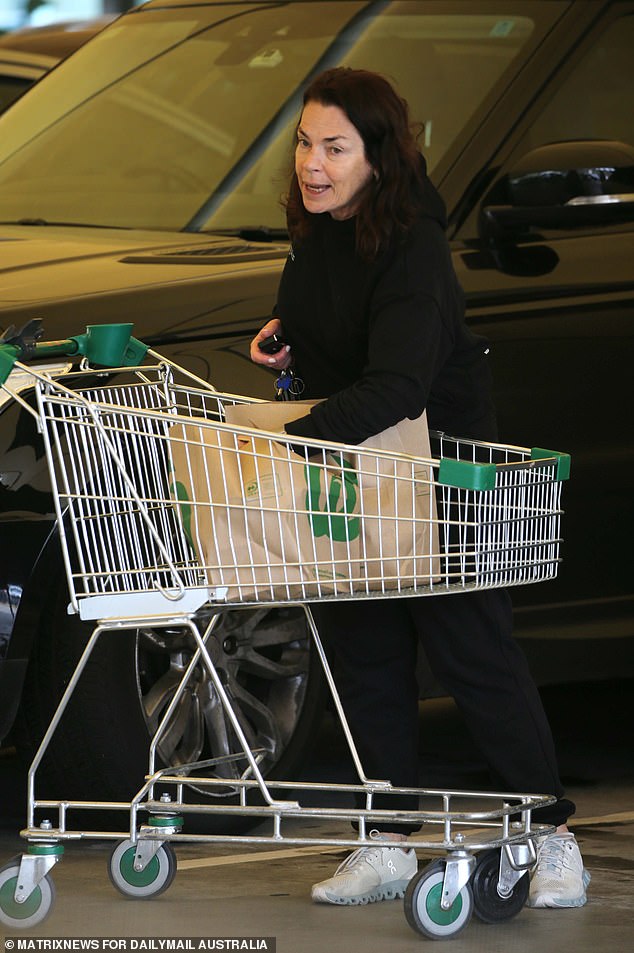 ‘And the attitude of kids towards their parents that it’s their inheritance. Bulls**t. I owned my first unit in Darling Point and paid it off by the time I was 30. I had three jobs. But my parents had nothing and I promised myself that I would not be poor.’

Another woman, who wished to remain anonymous, said she has already started to feel the sting at the bowser – despite the government’s insistence would not be immediately noticeable due to onshore fuel reserves.

‘I just filled up the car and I was like, yeah, wow. I am actually noticing it,’ she said.

The woman said she hasn’t been overly affected by rising grocery and electricity bills, having recently installed cost-reducing solar panels – but if things got worse, she would likely cut down on superfluous spending, rather than skipping essentials.

‘This demographic here, people do have money, so I’d probably buy less shoes,’ she said.

Katelin and Jonathan said they had noticed their petrol was more expensive and have started budgeting more in light of increasing costs.

‘We’ve changed where we shop – instead of Woolworths we go to Aldi,’ they said.

‘Budgeting is just a huge thing – especially being so young.’ 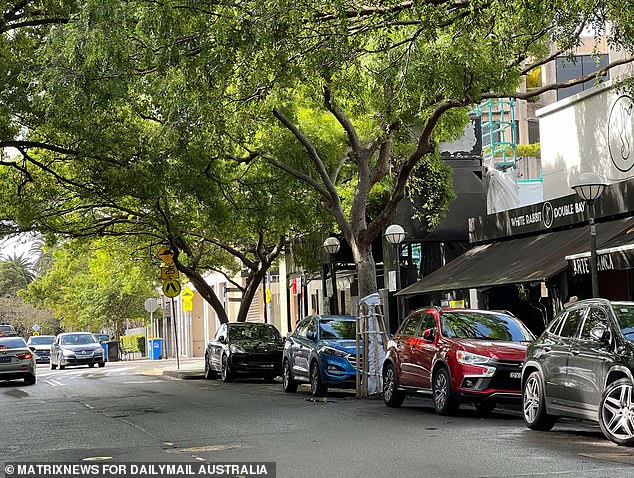 Young mother Natalie said she and her husband have become budget focused as they live on one income after recently welcoming a child.

‘We are definitely trying to be more cost conscious now because of things going up,’ she said.

‘I haven’t noticed a massive jump in groceries because everything is expensive when you have a baby, but petrol has definitely gone up.’

While she luckily locked in her mortgage rate while they were low in 2021, she said they are concerned about the hit when they refinance in a couple of years.

Another woman, Chloe, said her grocery bill has increased massively.

As for petrol costs, Chloe says she does not drive with the price of fuel being one of the reasons.

She said she has also stopped going out as much.

‘Ubers are just so expensive and no one wants to work, so they just don’t show up,’ she said.

Another woman, who wished to remain anonymous, said it was ‘quite terrible’ how much grocery and petrol prices have risen.

‘I don’t know how people live,’ she said. 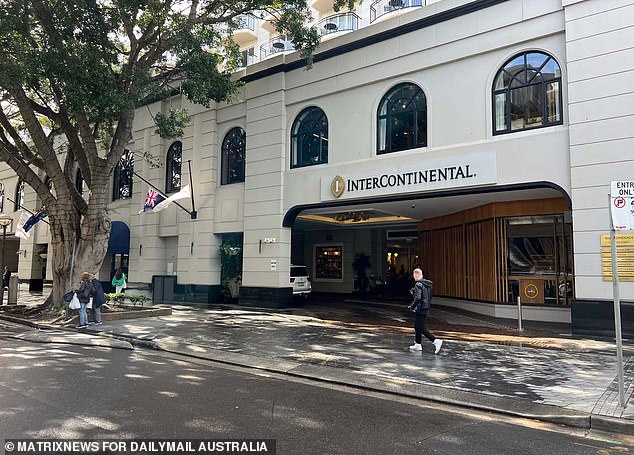 The Intercontinental Hotel in Double Bay has counted a stream of celebrities as guests, including Elton John, Nicole Kidman, Tom Cruise and Madonna, plus American presidents George Bush and Bill Clinton

The woman said she didn’t use her Range Rover often but petrol had gone up by about 20 per cent since the fuel excise cut ended.

‘I have just taken my car for a service and they told me I have done no mileage – and I am paying a fortune. I hardly drive it,’ she said.

The woman said she is ‘very conscious’ of rising prices and her family has cut down on certain luxuries, including dining out and entertainment.

Financial woes have gripped the nation over the past few months after inflation rate hit 6.1 per cent in June – the fastest annual increase in 21 years after the GST was introduced.

Both local and international issues have played a role in the economic situation Down Under, which is still reeling from the aftermath of the two-year Covid pandemic.

While the previous government offered a temporary reprieve, halving the fuel excise cut for six months from March, the Labor government said it ‘just can’t afford’ to keep it in place.

However, Treasurer Jim Chalmers said on Tuesday the blow would not be immediate because there was 700 million litres of petrol already on Australian shores that had been purchased at the discounted rate. 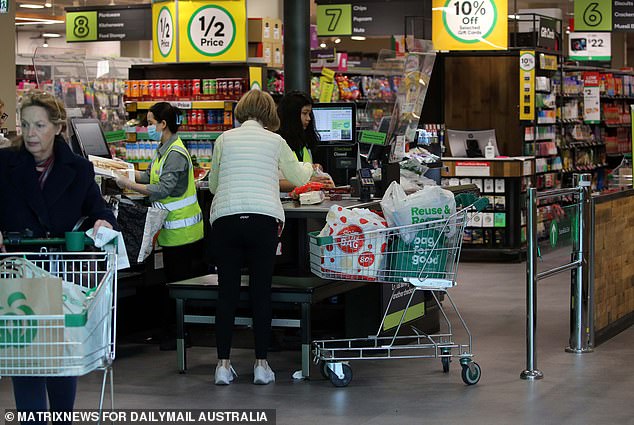 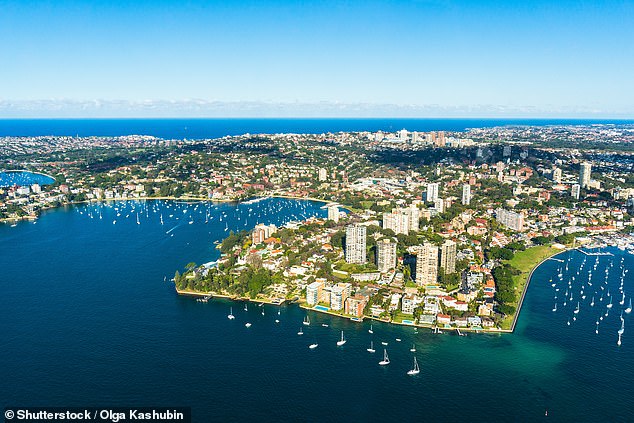 Double Bay is one of Australia’s richest suburbs, with median house prices sitting at $6.41million

‘This is 700 million reasons why the price shouldn’t shoot up … on the night that the excise relief ends,’ Mr Chalmers said.

‘The ACCC and the government expect the price of petrol shouldn’t shoot up at the bowser on Wednesday night by the full (amount) if the normal market pressures are in operation.’

Meanwhile, Aussies have also been facing growing interest rates, which are more pronounced for those with bigger repayments such as homeowners in Double Bay, where the mean house price is $6.41million and apartments cost $1.9 million on average.

The Reserve Bank announced its first increase in the official case rate since 2010 back in May, rising it by a quarter of a percentage point to to 0.35 per cent.

In 2021, RBA Governor Philip Lowe repeatedly vowed the cash rate would stay on hold at a record low of 0.1 per cent for another three years.

The interest rate is expected to go up again in October, with the RBA and Treasury both predicting inflation will hit a 32-year high of 7.75 per cent by the end of this year.