Australian motorists are being forced to wait four years for a brand new Toyota LandCruiser due to ‘unprecedented global demand’, even though the most ordered style has been around for almost 40 years.

The LandCruiser was Australia’s fifth most popular vehicle in August, with 2,379 orders placed.

Motorists wanting the four-wheel drive are even keener on an older, classic Japanese-built model – the 79 Series GXL ute – which has been in production since the mid-1980s.

This old-style ute even outsold the latest 300 Series wagon which only went on sale late last year.

The 79 Series GXL ute – with its shape dating all the way back to 1984 – was the most popular in the LandCruiser series with 493 of the dual cab version sold last month, Federal Chamber of Automotive Industries data showed.

Buyers so are frustrated with waiting for a brand new one – nominally priced at $75,000 – that late-model second hand models are selling for upwards of $125,000.

A Sydney Toyota dealer salesman told Daily Mail Australia the waiting time had stretched out to four years and, last month, they were instructed to stop taking orders for brand new models.

‘We’ve got to stop taking orders because of the current wait time,’ he said.

‘At the time, we are unable to take orders.’

A Toyota spokeswoman said it had been trying to get more stock sent to Australia.

‘Demand for new vehicles is at unprecedented levels,’ she told Daily Mail Australia.

‘In Australia, to support the strong demand, Toyota Australia has been continuing to working closely with our global production teams to secure as many vehicles for our market as possible, and minimise any impact.

‘Wait times will vary depending on the model, variant and specification requirements of each customer.

‘Due to the ever evolving nature of this situation Toyota dealers are best placed to continue to provide updates to our customers on delivery time frames for individual orders.’

The Toyota website advises of long waiting times, with a shortage of computer chips and Covid supply restrictions hampering the production of new cars and making used cars more valuable.

‘Due to the unprecedented global demand, we are currently experiencing extended wait times,’ it said.

The majority of new cars sold in Australia are SUVs with motorists overwhelming opting for a modern soft-roader like the Toyota RAV4 or Mazda CX-5, which are in the top 10 of monthly sales charts.

But the heavy-duty Toyota LandCruiser, one of the more capable off-road machines, is consistently one of Australia’s most popular cars.

Despite having outdated features – from a long gear stick to sheet metal lining the door inside – motorists seem to like the no-nonsense reliability and the ability to travel anywhere in Australia.

It still has a separate stick for the four-wheel drive transfer case, when most modern SUVs have an electronic rotary dial to switch between high or low ranges for off-roading.

In an era where most cars have curves, this LandCruiser has straight lines and gutters above the doors instead of a streamlined exterior.

The silver door handles look like something on a 1983 Toyota Corolla. 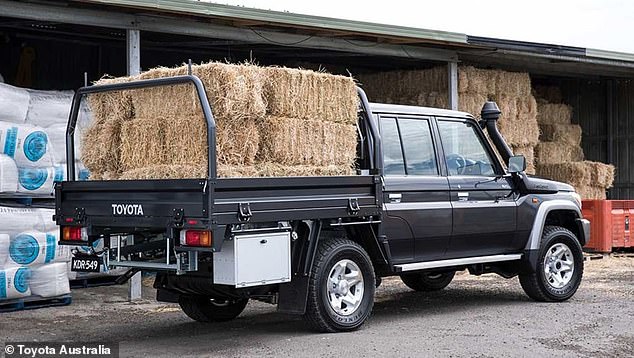 The 79 Series GXL dual cab ute (pictured) – with a shape dating back to 1984 – was the most popular variant with 493 sold, Federal Chamber of Automotive Industries data showed

The LandCruiser name refers to the sleek new 300 Series wagon, which only went on sale last year, and the 70 Series shape – which covers the old-style 79 Series ute.

Australia’s most popular cars in August

This LandCruiser has been the most popular model in every month of 2022, even as queues formed for the latest 300 Series wagon.

The 79 Series dual-cab GXL ute version has consistently outsold the more high-profile VX and Sahara models of the new LandCruiser.

The old-style GXL work horse comes with a 4.5 litre V8 turbo diesel – producing a moderate 151 kilowatts of power – and a touchscreen radio but it still has a retro digital clock and an old-fashioned ignition key instead of a modern stop-start button.

The old-style ute was even more popular than the all-new 300 Series LandCruiser wagon, with 493 of the 79 Series GXL dual cab sold last month compared with 407 for the luxury VX model, which is priced from $121,772.

The new-shape LandCruiser isn’t available with a V8, with Toyota instead fitting them with a V6 twin turbo that is more powerful, with 227kW of power compared with 200kW for the V8 on the discontinued 200 Series.

The 79 Series single cab GXL model – in an old shape – was the third most popular LandCruiser with 321 sold in August, with a nominal price of $73,050.

This made it even more popular than the all-new 300 Series LandCruiser Sahara, with 319 of them sold despite its $139,832 price tag. 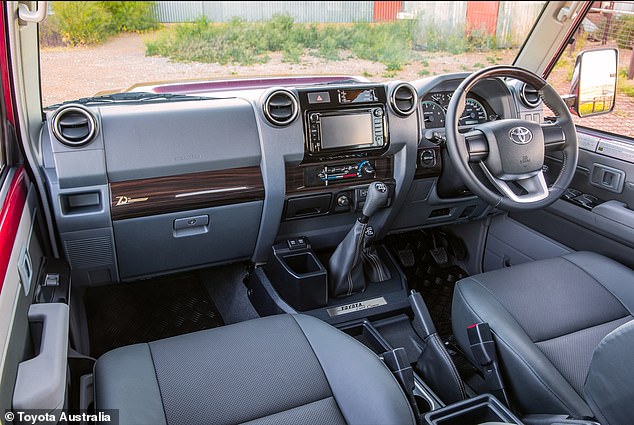 The old-style GXL work horse comes with a 4.5 litre V8 turbo diesel – producing a moderate 151 kilowatts of power – and a touchscreen radio but it still has a retro digital clock and an old-fashioned ignition key instead of a modern stop-start button 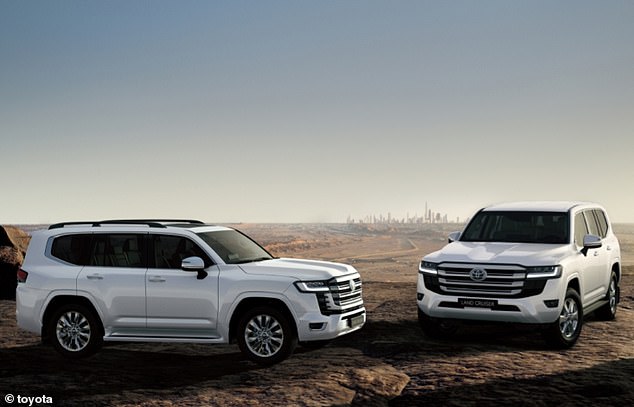 The 79 Series GXL ute LandCruiser has been the most popular variant in every month of 2022, even as queues formed for the latest 300 Series wagon (pictured). The dual-cab GXL has consistently outsold the more high-profile VX and Sahara models of the new LandCruiser 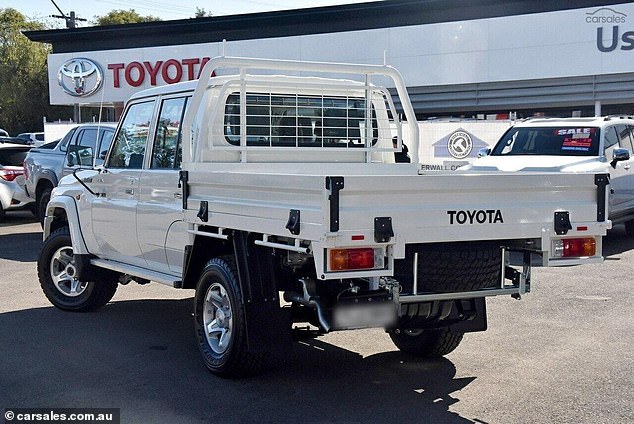 The GXL model nominally costs $75,600 new but late-model used examples are being listed for $125,000 on Carsales (example pictured)

The old-style LandCruiser is much more popular as a ute than as a wagon with 87 of them in this shape sold in August, not including seven troop carriers.

By comparison, 1,166 of the utes were sold in both as single and dual cabs.

Toyota markets the old-style LandCruiser as the 70 Series but the Federal Chamber of Automotive Industries data classifies the ute as the 79 Series and the wagons as the 76 and 78 Series.

The internet wasn’t available to the public until almost a decade later.

Only the Mercedes-Benz G-Class SUV, which debuted in 1982, has been around longer.

A Sydney Toyota dealer salesman told Daily Mail Australia the waiting time had stretched out to four years and last month, they were instructed to stop taking orders

The old Land Rover Defender had been in production in the same shape from 1948 until 2016.

Toyota has been selling four-wheel drives since the debut of the BJ model in 1951.

It was renamed the LandCruiser three years later, with 10million vehicles since sold worldwide.

A 70th anniversary limited edition of the old-style LandCruiser was released in August last year but they quickly sold out.