A headless snake has been filmed trying to launch itself at an innocent Australian man and his dog on a deserted beach.

The anonymous man came across the headless sea snake and decided to prod it gently with a tennis racket, not expecting it to move.

But to his horror the slithering reptile began to wriggle around when it came in contact with the piece of sporting equipment.

Even without a head the snake still attempted to defend itself.

The snake swayed side-to-side in an attempt to locate the man in front of it.

The creature’s head had clearly been torn off, with some social media users claiming it was eaten by a bird before being dropped on the beach.

Blood could be seen inside the snake’s open wound.

‘Even when the snakes in Australia have no head, they still come after you,’ the video was captioned.

Some snakes can live for hours without their cranium. 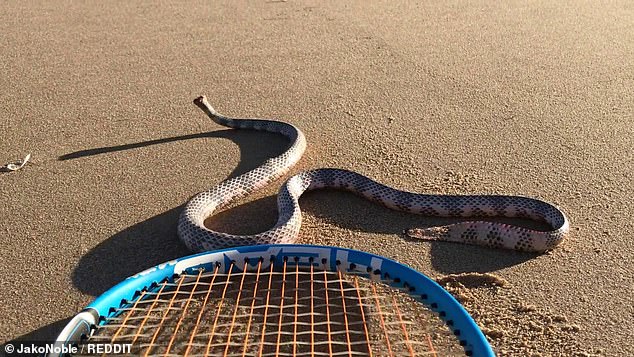 This is because they don’t need as much oxygen pumping to their brain as mammals, who would die instantly.

One social media user struggled to stomach the video.

‘This is horribly sad. Poor thing. Why would you post this,’ the user said.