Aussie farmers claim families can save hundreds of dollars on fresh fruit and vegetables by buying them away from major supermarkets.

As Australia’s cost of living crisis continues, fresh food prices have come under the spotlight after rising above the rate of inflation.

The latest CPI figures showed the cost of fruits and vegetables grew by 6.7 per cent in the March quarter compared to a year ago, with the rate of inflation at 5.1 per cent.

Rising energy and fuel prices, the aftermath of the Covid pandemic, east coast storms and the war in Ukraine have all been blamed for the escalating cost of living.

However, anger is shifting towards Australia’s supermarkets that continue to turn over billion-dollar profits.

Farmer Guy Gaeta has suggested a boycott of major supermarkets because he says they rip off consumers and farmers (Pictured, from left, Guy Gaeta with wife Simonetta and son Michael) 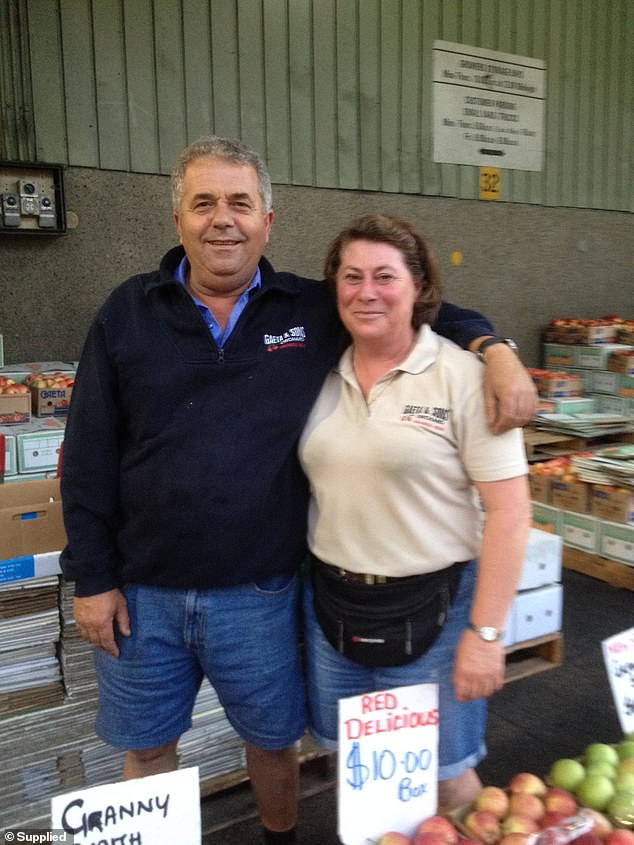 Prices are expected to climb even higher after the Lockyer Valley in south-east Queensland, where many winter vegetables are grown, flooded in May.

But Guy Gaeta, an apple and cherry grower from Orange, in the New South Wales Central West who sells at wholesale markets, told Daily Mail Australia supermarket prices are far higher than they need to be.

Mr Gaeta urged consumers to boycott major supermarket chains, which dominate grocery sales in Australia more than in most countries.

‘The only way you teach Woolies a lesson is if don’t buy your fresh fruit and vegetables there – go down the road to green grocer or come to Flemington markets.’

Mr Gaeta claimed families could save ’50 or 60 per cent’ on their fruit and vegetable bills by shopping at Sydney markets at Flemington. 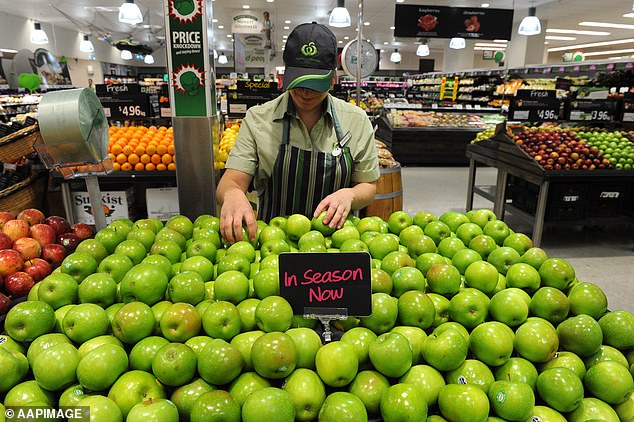 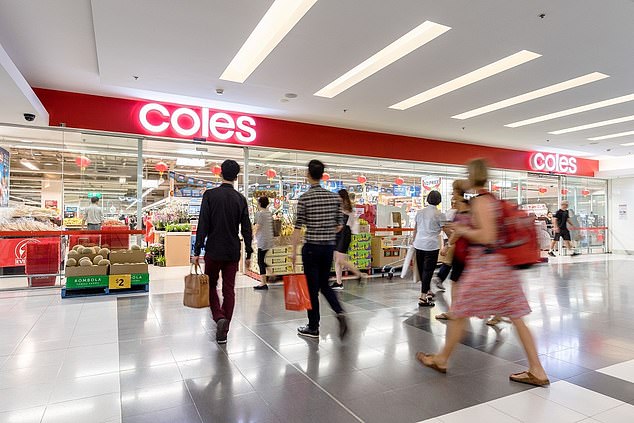 ‘I just feel sorry for young families. I’ve got adult kids now, but I have grandkids and that’s what worries me,’ he said.

He claimed prices are often lower in wholesalers that sell to the public, or in greengrocers, on blueberries, lemons, cherries, apples, cucumbers, capsicums, ginger and lettuce.

‘Producers are selling boxes of 20kg for $20, and supermarkets are turning that into a $150 box.’

A quick scan of online prices for Lebanese cucumbers on Thursday, June 23 showed Woolworths was selling them individually for $2.14, 30 per cent more expensive than premium online fruit and vegetable supplier Fruitezy on the same day.

Mr Gaeta said what upsets farmers is the difference between what supermarkets pay them and the in-store prices.

A quick scan of online prices for lebanese cucumbers showed Woolworths is selling them individually for $2.14, 30 per cent more expensive than premium online fruit and veges supplier Fruitezy. 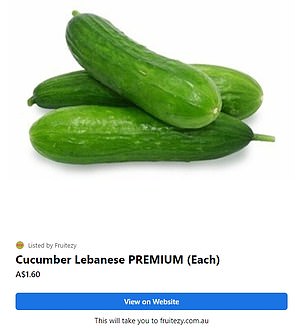 ‘People think farmers are doing well. But farmers do not see the prices that supermarkets charge,’ he said.

‘I understand we are all trying to make money, but you don’t need to rip people off.’

Another farmer, from north Queensland, who asked not to be named because he fears major supermarkets would stop buying his produce, estimated supermarkets charged ’30 per cent’ more than they should.

‘I would say consumers should look for value, I would say go to your greengrocer independent retailers. If you look for better value, you’ll find it,’ he told Daily Mail Australia.

He said it’s time for supermarkets to demonstrate ‘transparency’ about their mark-ups.

The farmer, who grows mixed fresh produce, claimed the difference between what producers and paid and what supermarkets sell the same items for is increasing at a rate that angers farmers.

‘It’s all well and good telling us ‘prices are down’ in ads, but if they believe their processes are all above board, they should publish what the farmer got paid on social media so people can see for themselves,’ he said.

‘They need to demonstrate to the public that they are basically acting in their best interests and providing value.’

He claimed supermarkets should not be citing fuel costs as reasons for price rises because farmers are disproportionately affected by rising petrol costs.

‘A lot of people seem to think supermarkets pay for all freight – no they don’t. For instance, getting produce from north Queensland to Brisbane or Sydney is not the supermarket’s cost, it’s ours,’ he said.

‘The farmer is the one with the most exposure to cost.’

He said producers are angry that major supermarkets are making billions of dollars in after-tax profits while most farmers ‘either break even or lose money’.

‘Most farmers will break even or generate a loss because of input costs – fuel, wages, chemicals etc. Most costs are up 30 to 60 per cent.

‘If farmers are under pressure, surely it’s only fair retailers share that? I haven’t heard supermarkets complain they’re struggling to make ends meet.’ 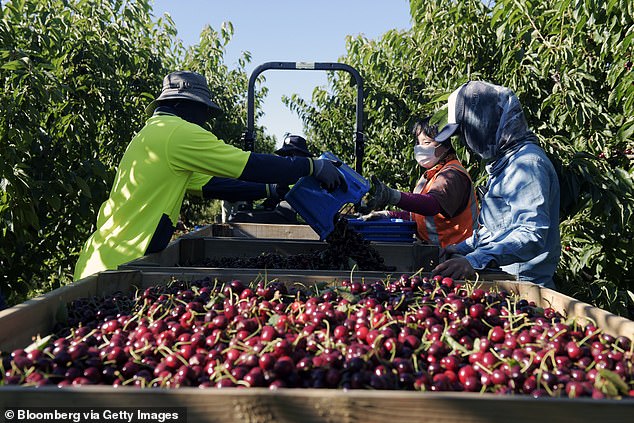 ‘The ACCC looks pretty toothless to us. Where are their investigations into transparency on pricing between what a grower gets and what’s being charged in store?’

‘This country has a failed competition policy. The heat really needs to be turned up on supermarkets.’

Mr Gaetta claimed senior figures in government had told him price gouging is not illegal in Australia’.

Major supermarket chains Daily Mail Australia contacted staunchly defended their pricing as the result of a ‘complex range of factors’.

Both Woolies and Coles are understood to be signatories to an agreement guaranteeing fair treatment of producers.

‘We operate in a highly competitive market, and we’re always working to strike the right balance, so suppliers receive a fair market price and our customers have access to affordable fresh produce,’ Woolworths said in a statement to Daily Mail Australia.

Woolworths claimed prices were up ‘in some varieties’ because of reduced supply ‘following the east coast floods and ongoing bad weather in key growing regions’.

It said other fresh produce, ‘like apples, pears, citrus and avocados [are] in good supply’ and are ‘great value’.

Coles claimed ‘growers want to work’ with it due to [our] commitment to ‘strong, multigenerational … partnerships’ with producers including long-term contracts’.

It said prices are determined by ‘supply and demand’ and that ‘our team is working hard to get prices down’.

‘Our customers can expect to see improved volume of many fresh produce lines in coming weeks thanks to the extraordinary efforts of our growers.’

Would a ‘boycott’ of supermarkets reduce your grocery bills?

An all-out boycott of supermarkets would probably not reduce your grocery bills.

In fact, Choice has said switching to home-brand supermarket products can provide savings of up to 40 per cent.

But quitting major chains for certain items – or even whole categories, such as fruit and veggies – within your weekly shop could reduce the cost of your weekly or fortnightly shop.

The farmers Daily Mail Australia spoke to claimed families could get significantly better value on many items outside of stores like Coles and Woolworths.

Choice’s official advice to shoppers is don’t shop on ‘autopilot’, even in supermarkets.

In its 2021 supermarket satisfaction survey review, Coles and Woolworths were a long way from best in class on value for money even when compared to other chains.

ALDI had the top score, with 84 per cent of respondents reporting value for money.

Sixty-one per cent of Woolies customers and 59 per cent of Coles shoppers reported value for money.

‘Think about their free fruit for kids gimmick. Producers are struggling to make ends meet, but they are able to afford give things away for free and still generate massive profits,’ the farmer told Daily Mail Australia.

The four major supermarket chains control over 80 per cent of the market in Australia, which critics argue, stifles real competition on prices.

Woollies has 37 per cent of the market, ahead of Coles with 28 per cent, while Aldi is third with 10.5 per cent. IGA (Metcash) is fourth with 7 per cent.

Aldi has around 10 per cent of the market and is steadily increasing its revenue to over $10billion a year.

Aussie consumers spent $125billion at supermarkets in the past year.

‘At Coles, our key focus is on keeping the cost of the family shop down and delivering great value to our customers. We appreciate that there are a number of factors driving inflation for all retailers, including increases in the cost of raw materials, energy price rises, freight costs, extreme weather events and ongoing COVID impacts.

‘We are committed to continuing to build strong, multigenerational, collaborative partnerships with Australian farmers and producers, including long-term contracts, which is why so many growers want to work directly with Coles. These partnerships enable us to source directly from suppliers and help us secure, fresher produce at great value for our customers.

‘The price of produce is a factor of supply and demand, however our team is working hard to get prices down for our customers as quickly as we can.

‘Our customers can expect to see improved volume of many fresh produce lines in coming weeks thanks to the extraordinary efforts of our growers.’

‘The supermarket price of fruit and veg is determined by what we pay our farmers for each variety. We pay farmers the market price for their produce, which can vary throughout the year due to weather, seasonality, supply and demand.

‘Last year, when the market price for fruit and veg was in decline, we passed those savings on to customers in the supermarket.

‘Currently, we’re paying a lot more to our suppliers across the vegetable category. The big reason prices are up on some varieties is the reduced supply in the market, following the east coast floods and ongoing bad weather in key growing regions.

‘Many categories like apples, pears, citrus and avocados continue to be in good supply and we’re passing on the great value from these seasonal fruits to our customers.

‘We operate in a highly competitive market and we’re always working to strike the right balance so suppliers receive a fair market price and our customers have access to affordable fresh produce.’

‘We always want to deliver the best value for our customers while maintaining fair pricing with our supplier partners.’