When Eddie Jones was appointed England coach in 2015, I asked him how he thought he’d get along with the British media.

Having been working in the UK for two years as sports correspondent for a major Australian media group, I’d seen the English press in action up close and I knew that when they got a sniff of blood, they were as ruthless as a Great White shark.

‘I’m telling you Eddie,’ I said. ‘They’re like nothing you’ve ever experienced.’

He didn’t seem concerned, saying that he had once been given a piece of sound advice by rugby league coach Brian Smith.

Trouble was, when the British press starting baying for Eddie’s head after last month’s 27-13 loss to the Springboks at Twickenham, Smith’s words didn’t apply.

Eddie really was as bad as they said he was.

With just five wins and a draw from 12 Tests in 2022 – England’s worst season since 2008 – it was no surprise that England rugby CEO Bill Sweeney expressed being ‘really disappointed’ by the team’s performance.

But sacking the coach just 10 months out from the next World Cup? It was a big call.

After all, over the past seven seasons Jones had recorded a 73 percent success rate in his 81 matches in charge, better than any other England coach. He had taken the side to three Six Nations titles, a Grand Slam and a record-equaling 18 consecutive Test wins.

He had also enhanced his reputation as a master of Rugby World Cup preparation. In 2003 he took the Wallabies to the final. In 2007 he was assistant coach of the South African team that won. In 2015 his Japan side pulled off arguably the biggest upset in the game’s history when they beat the Springboks and, four years later, he took England to the final.

And it wasn’t all plain sailing either. In both 2003 and 2019 his sides struggled in the lead-up and there were calls for him to be sacked months before the tournament kicked off.

Yet both teams came good at the right time, just like Eddie said they would. In 2003 reporters described Jones as having given the Wallabies a ‘Melbourne Cup preparation’.

As his former Wallaby and ACT Brumbies player Matt Giteau said last night, ‘He plans and plans years in advance for this competition. It’s the one competition he’s got consistently right time and time again.’ 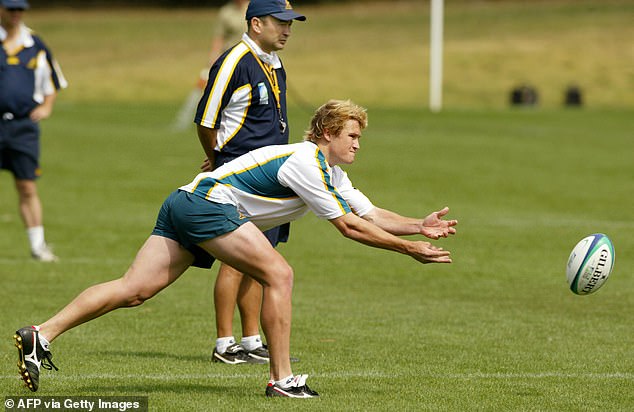 Matt Giteau (pictured passing the ball during a training session when Jones was Wallabies coach in 2003) defended his former coach, saying he was the perfect mentor ahead of next year’s World Cup

Still, even knowing all that – and with the prospect of having to hand over a reported $1 million pay-out to end his contract early – England sacked him.

Which raises the question: surely there’s got to be more to it than just losing six Tests?

Of course there is. Much as he is a master coach, Eddie Jones has another skill. He can piss people off more than just about anyone else in world sport.

In 2017 I approached Eddie with the idea of collaborating on a biography.

In the years that I had been dealing with him as coach of the Brumbies, Wallabies, Queensland Reds, Japan and England, I found him to be one of the most interesting, charismatic and intriguing characters I had ever dealt with. 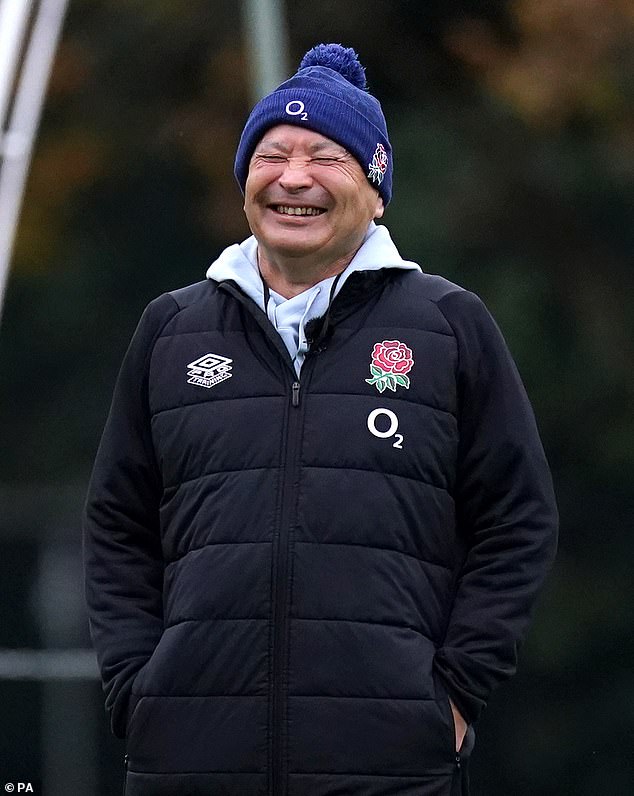 Eddie Jones, who made his name playing for Randwick in Shute Shield before a storied coaching career is a polarising figure for many players, coaches, administrators and fans…but also one of the great characters of world rugby

Most of all, I thought he was fun, and I hoped that other people would find a book about him fun as well.

Unfortunately, Eddie informed me that he had already signed a book deal with someone else. Unperturbed, I decided to push ahead and write what is known in the trade as an ‘unauthorized biography.’

Which turned out to be a good thing, because it meant that I could give a balanced view of the man and speak not only to his supporters, but his detractors as well.

And there were plenty of both.

Ex-Wallaby Elton Flatley described Jones as the best coach he ever played under. Dual international Wendell Sailor told how, after he was banned for cocaine use, he was cut off by Rugby Australia but Jones would ring regularly to check on the welfare of him and his family. A former member of the Wallabies technical staff recalled how, when his marriage was breaking up, Jones offered to fly from England to provide support.

And then there was the other side of the coin. Players who were driven to the edge of breaking point, administrators who found Jones difficult to work with, and support staff worn down by his exacting expectations. 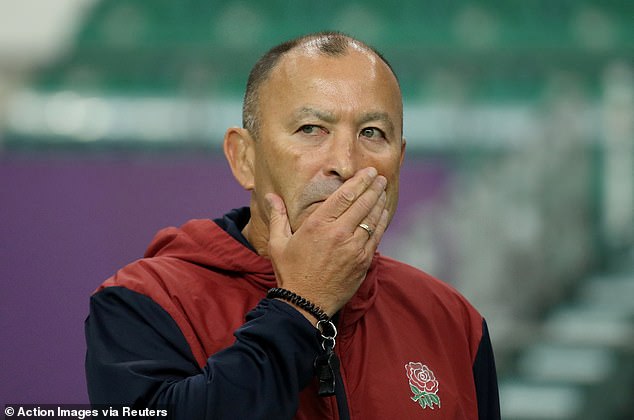 In recent days as the ‘Sack Eddie Jones’ campaign gained momentum, there has been a lot written and said about the fact that some of his assistant coaches were considering quitting.

This is news? Eddie has gone through assistant coaches like a kid eating a packet of M&Ms since day one. He burns them out. They can’t keep up with his obsessive pursuit of excellence; the daily 6am meetings, incessant video analysis, incredibly long hours and what one former assistant described as his ‘infamous verbal sprays’.

‘I couldn’t believe the way he talked to people in front of other people,’ Gould told me. ‘I’ve managed enough people to know that there are some things you just can’t do to them. You can’t take away their dignity.’

There were also plenty of examples of his reluctance to accept input from senior administrators.

Former Rugby Australia CEO John O’Neill was one of several senior administrators who had a prickly relationship with Jones. He said that on one occasion after a furious argument with the ARU’s Head of High-Performance Brett Robinson, Eddie stormed out of Robinson’s office and slammed the door so hard it broke the lock.

And it hasn’t just been people that Eddie has got offside. He has managed to upset entire countries, calling Wales a ‘shitty little place’ and the Irish ‘scummy’. 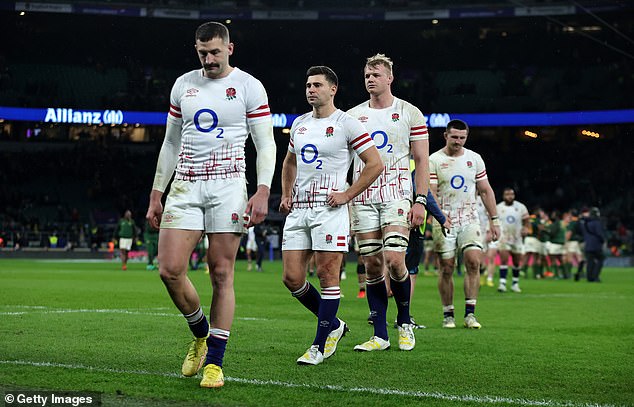 Dejected England players leave the field after yet another loss under Jones; this time to South Africa at Twickenham in November

For seven years the people who run English rugby have been willing to overlook Eddie’s dark side as long as the team has been winning and Twickenham packed with happy fans. Either that or, as some would have it, they have been intimidated by him and were just waiting for an excuse to get rid of him.

Likewise, until recently the British media has loved having him to toss them tasty titbits to fill their columns. He has been colourful, amusing, controversial and, for a while at least, successful.

But then the inevitable happened. He reached his use-by date.

When Jones was appointed to the job, former Wallaby captain Phil Kearns was asked how he thought England would perform under his former Randwick club team-mate.

‘I think in the short term they will be incredibly successful,’ he said. ‘The big question is what happens after that?

‘He is a very astute coach, but there is a point where the fanatical work ethic goes too far.

‘I’ve heard a couple of the guys in the Japan team say they would never play under him again because they could not keep up with the workload, it was so intense. It will be interesting to see how over time the Pommies go.’ 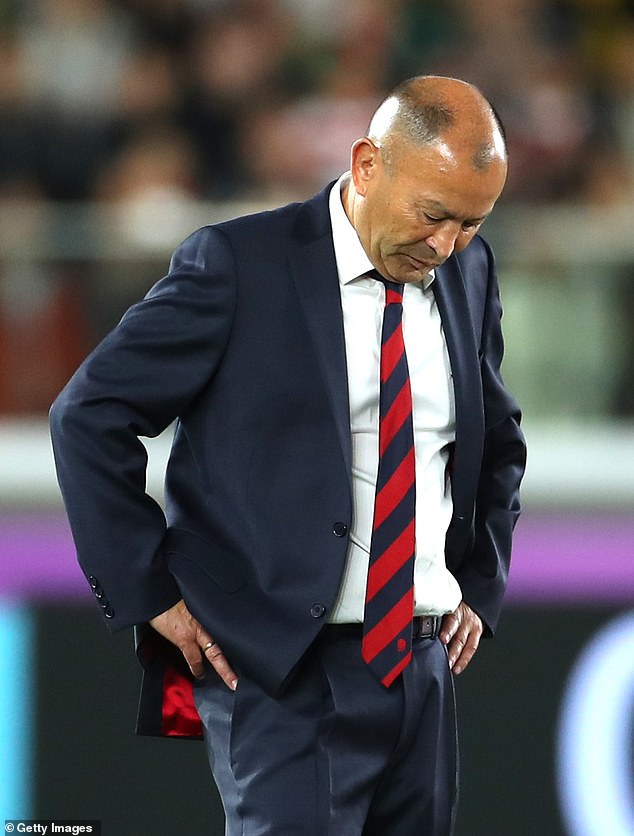 Eddie Jones, pictured after England lost the 2019 Rugby World Cup Final against South Africa, is now a free man, and hasn’t shut the door on any coaching job

The answer to that is, they went pretty darn well. The real question now is: what next for Eddie Jones?

Will he, as many long-suffering Wallaby fans hope, return to Australia and pick up where he left off when sacked by Rugby Australia 17 years ago?

In the course of our numerous conversations over the years, Eddie has said two things that have always stood out.

‘I didn’t divorce Australia, Australia divorced me’ and ‘I’m a professional coach. I never shut the door on anything.’

We can only hope he does come back, because one thing is for sure: it will be one heck of a ride.

Right up until the moment he really is as bad as the media says he is.