Australian batsman Marnus Labuschagne has turned heads after bizarrely asking his teammates for a cigarette lighter when at the crease in Sydney.

The South African born star, 28, isn’t a smoker – he wanted the lighter to burn some material off his helmet on day one of the Third Test.

Fox Sports commentator Mark Howard joked Labuschagne ‘didn’t want a dart’ out in the middle – it was all about some running repairs. 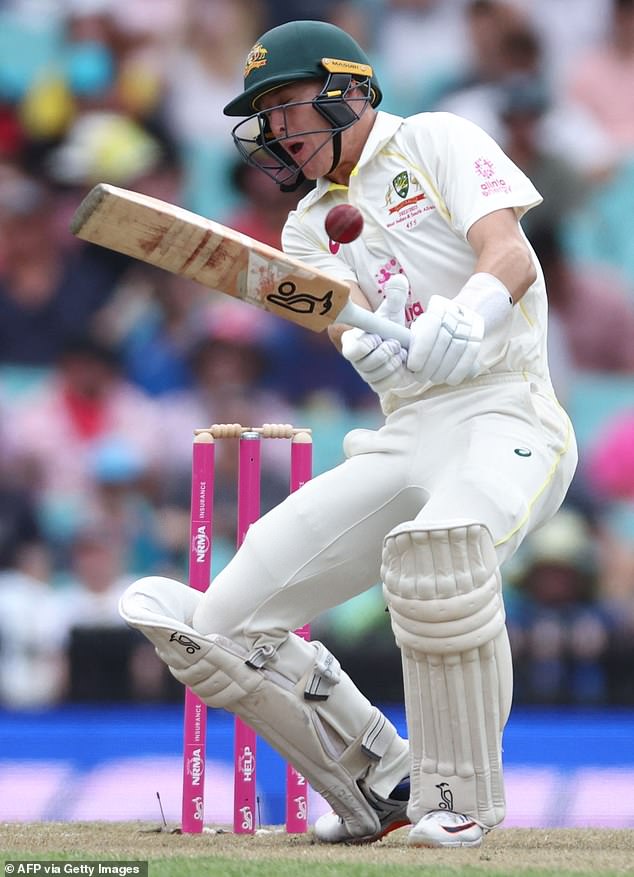 The South African born star, 28, isn’t a smoker – he wanted the lighter to burn some material off his helmet

Labuschagne later lit up social media after he was given not out by third umpire Richard Kettleborough in a highly contentious decision.

Moments earlier on-field umpire Paul Reiffel sent the call upstairs with a soft signal of out – and much to the dismay of the Proteas, the 2022 ICC batsman of the year was given a reprieve.

South African spinner Simon Harmer was adamant he had held onto the low catch, but after a number of replays, Labuschagne was given the benefit of the doubt. 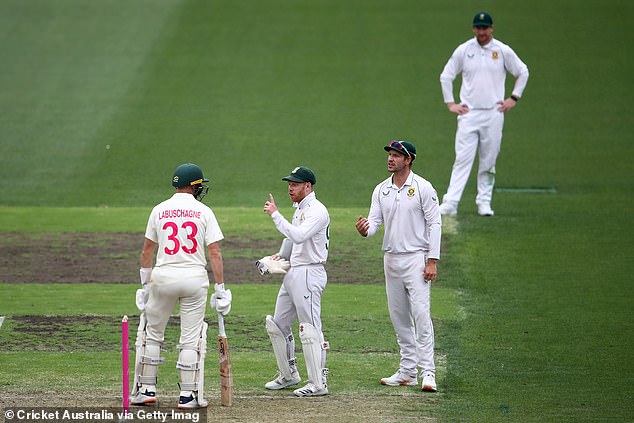 Moments later, Marnus Labuschagne was given out – only to be given a reprieve by the third umpire (pictured, Proteas players pass on their thoughts)

And seconds before the decision which went in his favour, a confident – and many would say bullish – Labuschagne asked for middle stump, insisting the ball didn’t carry.

The decision will also further fuel constant talk Labuschagne is the ‘luckiest man’ in world cricket, with many cricket fans feeling the eccentric star often gets the rub of the green.

‘I feel as though the South Africans can be quite aggrieved here,’ former Test batsman Michael Hussey said on Fox Cricket when analysing the outcome. 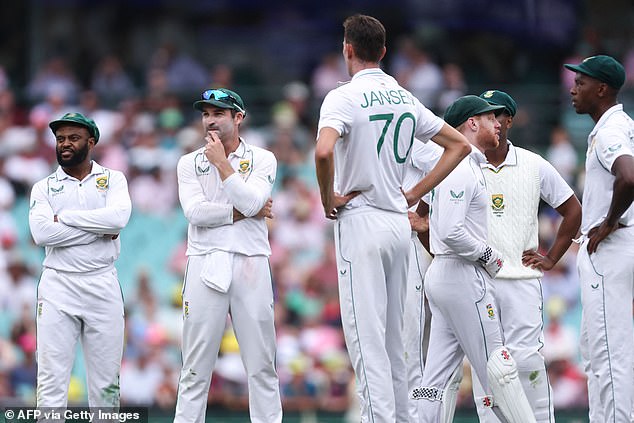 Proteas players were furious at the decision, led by under pressure skipper Dean Elgar (second from left)

‘The soft signal was out. I felt like the ball landed on the fingers and he (Harmer) was able to scoop it up.

‘His fingers are down, it hits the top of the fingers, pushed it back.

‘I don’t think there’s conclusive evidence there to overturn that decision.’

Former South African great Shaun Pollock said his fellow countrymen would have ‘been spewing’ at the outcome as they look to avoid a 3-0 series whitewash.

Not long after the Labuschagne ordeal, play was suspended at the SCG due to bad light.

Australia are well placed at 1/138 from 43 overs, with Labuschagne unbeaten on 73, while Usman Khawaja is 51 not out.