A pub owner has released damning CCTV images of a bartender who publicly complained about his pay getting docked for repeatedly using his phone at work.

The Melbourne University student complained that $298.65 was deducted from his pay after he worked on January 2 at Birdies Mini Golf and Sports in Forest Hill, Victoria.

His total pay for the public holiday shifts should have been $537.57, but after deductions he received just $238.92 for nine hours’ work.

That was because he had spent ‘over 5 hours on (his) mobile phone during (his) shift’, according to a pay slip shared to Reddit by the unnamed Melbourne bartender.

‘I did use my phone when there are no customers,’ the bartender said. ‘Is this legal?’

Using your phone or eating and drinking while working are all frowned on in the hospitality industry.

But that was before the frustrated pub owner hit back by releasing security camera images that showed the bartender constantly on his device. 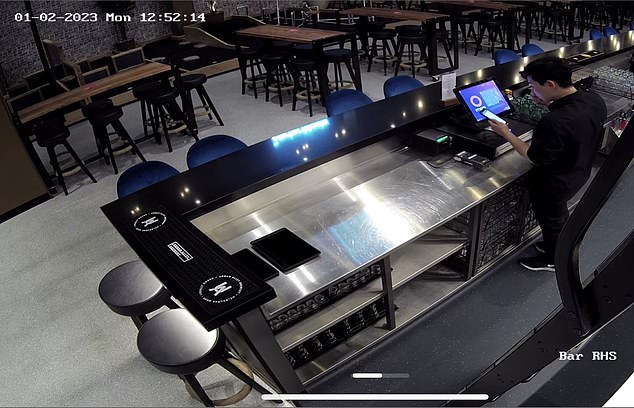 The employee shared his payslip which showed he had been docked $298.65 ‘for over 5 hours on mobile phone during shift’

Stephanie Doyle, Birdies’ owner, told Daily Mail Australia that what the employee shared to Reddit was not the full story.

Whose side are you on?

She claimed the student, a casual employee, had been paid for two other full days, despite also using his phone on those shifts.

When he was on his phone for his third shift in a row she decided to dock his pay, but claims to have warned him first.

‘We are not talking about checking for messages every now and again or shooting off a quick text,’ Ms Doyle said.

‘We are talking about five-plus hours of being on his phone and ignoring clear directions to stop that behaviour and to do specific tasks.

‘He was clearly engaged in personal activities for many hours and not working.’ 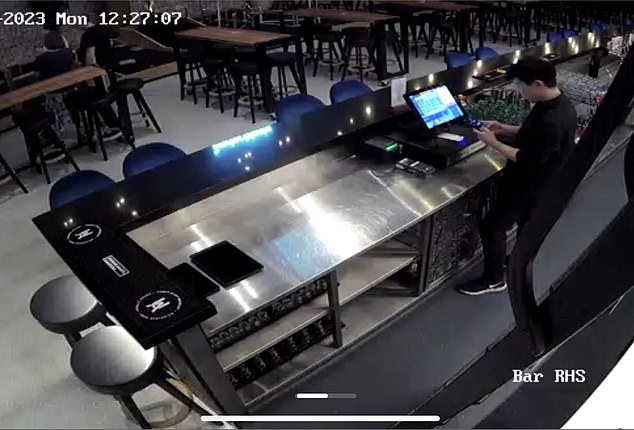 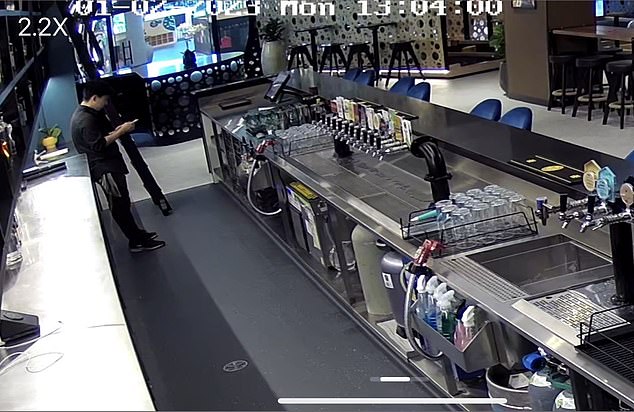 The Bartender’s total pay for January 2 was supposed to be $537.57, but after the deduction he was only paid $238.92 for nine hours work – because he spent 5 hours playing with his phone

‘If this was your business, would you find that acceptable conduct?’

Ms Doyle claimed on the day she was docked the employee’s pay, she called him 12 times ‘explaining that he needed to get off his phone and work’.

‘He said “ok” and then ignored me every time,’ she alleged.

‘On at least five of those calls I reminded him that excessive and continued private phone use was not acceptable and that he would not be paid for all of his shift if this continues.’

She also alleged he didn’t complete the work assigned to him – going so far as to claim that his inattention cost her hundreds of dollars. 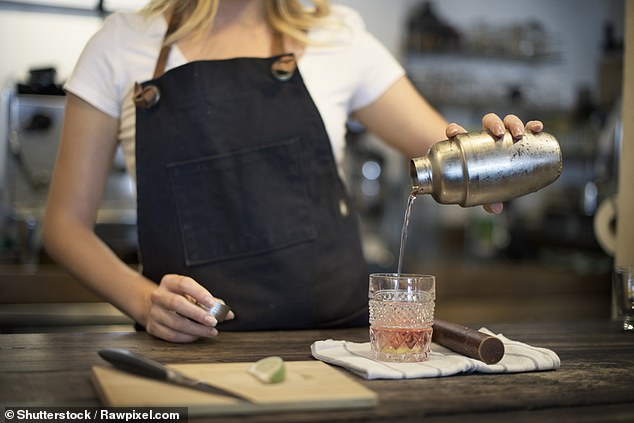 The employee worked a nine hour shift at Birdies Mini Golf and Sports – but spent five hours looking at his phone, the bar’s owner claimed 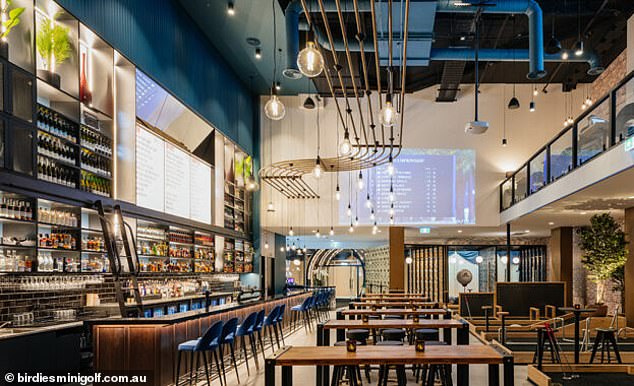 Ms Doyle said after the employee shared his complaint to reddit, her account and the pub was targeted with ‘vile’ abuse

Ms Doyle said after the employee shared his complaint to Reddit, her account and the pub was targeted with ‘vile’ abuse.

‘I have received a barrage of hate emails saying vile things,’ she said.

‘Both of my venues and staff working today have also received hate calls, which is uncalled for and distressing for them.

‘I have been trolled on all forms of social media. All because of an employee who chose to share a snippet of the story rather than the entire story.’

The man claimed to have quit the job at the suggestion of fellow Reddit users, who also urged him he demand that the docked pay be refunded.

‘That motherf***er stole $300 from you. If he took it directly from your wallet he would go to jail,’ a furious Reddit follower said. ‘You need to fight for this if you can.’

The employee responded: ‘I will definitely fight for this – $300 is a lot for me.’

In a bizarre update on Monday morning, the employee told Reddit followers that he had received a chilling phone call after asking for his docked pay to be refunded.

When can an employer deduct from your wages?

An employer can only deduct money if:

‘I have got no response from Birdies after trying to contact. Did get a no caller id call with a voice I recognise …

‘He threatened to post posters in Melbourne University (my uni) saying that I am a paedophile. That’s the kind of people I’m dealing with.’

Ms Doyle rubbished the suggestion she or anyone on her behalf did this.

‘This is completely denied. I am the owner of Birdies and no one has been making calls or anything of this nature.

‘No one would do this on my behalf. And under no circumstances would I ever ask someone to.’

However, she did say the bar tender had threatened her with ‘reputational damage’ if Birdies didn’t return the docked pay.

‘Fair Work is a fantastic resource,’ she said. ‘If the employee wants to he can contact them and Fair Work will investigate.’

Ms Doyle said other staff also use their phones while working, but after warnings they usually stop.

‘I have had to warn employees for watching movies on their phones and excessive phone use previously, but they modify their behaviour inline with expectations,’ she said.

According to Fair Work Australia ‘there are limited situations when an employer can make a deduction from an employee’s pay or require an employee to pay money’.

They cannot deduct if it ‘is unreasonable in the circumstances’ or if the worker is aged under 18 or without an agreement in place.

According to the Fair Work Commission, deductions from wages can only occur if they are authorised by an employee or if a governing agreement authorises it. 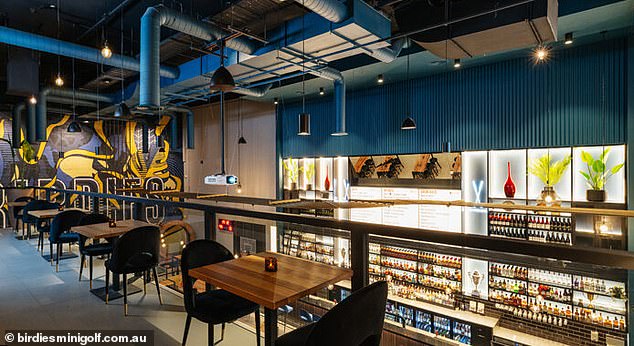 Birdies has an employee policy which says deductions from wages are possible for unreasonable phone use. Staff read and sign it on their first shift.

Birdies has an employee policy which says deductions from wages are possible for unreasonable phone use. Staff read and sign it on their first shift.

But in the Reddit post, the employee claimed: ‘There is no clause or any agreements I made with them regarding this.’

‘My understanding is that if an employee has received warnings (without any deductions or penalties) and is also aware of the policy then it’s fair to deduct,’ she said.

‘And I didn’t just deduct I spoke to him numerous times on the day and kept warning him and he simply ignored me as I wasn’t in the venue, despite knowing there are cameras everywhere.

‘That’s why I was so transparent on the pay slip. I’m not hiding anything.’

Daily Mail Australia approached the United Workers Union and the employee for comment.