CCTV footage shows Billy Dean Fallon, 28, stormed out of a female ambulant toilet cubicle shirtless and headbutt the Nightjar nightclub staff member in Burleigh Heads, before repeatedly punching him in a wild brawl at around midnight on January 20.

The worker had been knocking on the cubicle door to clean the inside for about three minutes when he was attacked.

The attack unfolds with three women watching on in horror as they wait to use the bathroom.

As the fight continues the cleaner clinches up with Fallon driving him into the wall and breaking apart the plaster.

The two men eventually fall to the ground as Fallon repeatedly punches the worker in his ribs.

Fallon’s partner can be seen in the CCTV exiting the cubicle and watching the brawl unfold but she makes no attempt to break it up.

A security guard and another patron rush into the bathroom and pry the men, who are covered in blood, off each other.

The cleaner was left with a broken nose but did not give a victim impact statement. 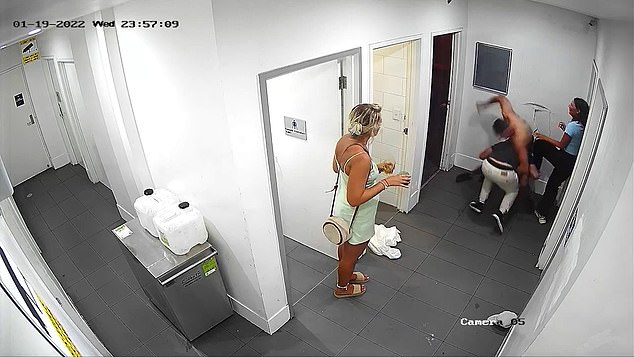 The court heard that Fallon was having an ‘intimate encounter’ with his partner before the pair were interrupted by the cleaner.

Magistrate Michelle Dooley said the attack on the cleaner was uncalled for as he was simply doing his job.

‘This individual was engaged in his normal employment, was clearly unaffected by alcohol and just going about his normal duties as part of his job,’ she said.

Fallon’s defence lawyer said his client was drunk at the time, had an alcohol problem that he developed in the military, and had grown up in Grafton where fights in bathrooms were common. 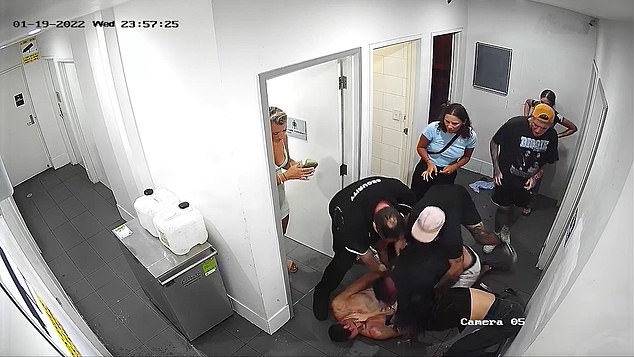 Fallon was sentenced to 12 months’ jail but was given immediate parole. He was ordered to pay the cleaner $1500 in compensation

‘He acted impulsively, he acted protectively and he thought he was protecting himself and his partner.’

Fallon was sentenced to 12 months’ jail but was given immediate parole. He was ordered to pay the cleaner $1500 in compensation.