Four states are on flood watch with some regions forecast to cop up to 200mm of rain before conditions ease mid-week.

The Bureau of Meteorology warned widespread rain and thunderstorms along the coast in the next two days would lead to more river rises and flooding.

Severe thunderstorms across much of NSW, southern Queensland and northern Victoria will bring heavy rainfall until Tuesday, which will result in floods, damaging winds, and possible large hail.

One storm is entering NSW from South Australia, bringing fresh rain, while another is hovering at the coastal Queensland border, which has the potential to dump up to 200mm on the already saturated Northern Rivers region.

Every corner of NSW is blanketed by rain with almost 140 flood warnings in place, including 20 evacuation orders.

They include the Northern Rivers, where Lismore residents spent Sunday sandbagging properties for their third major flood this year.

Closer to the coast, popular tourist mecca Byron Bay has already been hit with flash flooding with the main street inundated with ankle-deep water. 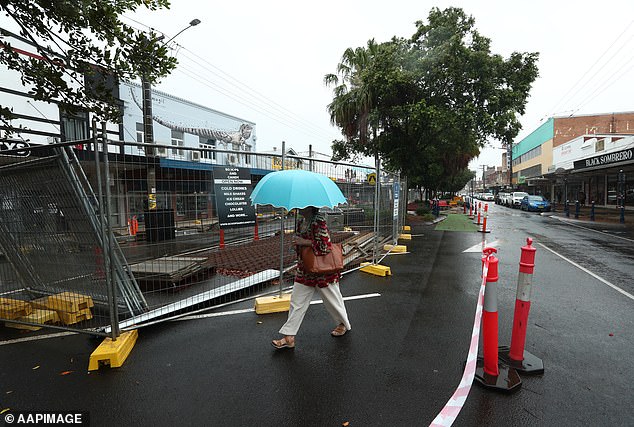 Lismore residents are bracing for their third major flood within months. Pictured is a woman braving the wet weather in Lismore on Sunday

Further inland, the Mehi River at Moree is threatening to exceed the record 10.87m set 67 years ago.

Hundreds of Dubbo residents and holidaymakers staying at Western Plains Tourist Park were also ordered to evacuate on Sunday night as the Macquarie River continues to rise.

‘If you remain in the area, you may become trapped without power, water, and other essential services. It may be too dangerous for NSW SES to rescue you, and buildings may not be able to withstand the impact of flood water,’ the SES warned.

Also on high alert are the Mid North Coast, the Hunter and Sydney catchments, Gunnedah on the northern Namoi River, the Riverina town of Narrandera on the Murrumbidgee and Moama on the Murray River.

Emergency Services Minister Stephanie Cook said there was a flood risk in ‘every corner’ of NSW.

‘We are facing a very dangerous 48 hours across NSW,’ she said.

‘What we are currently experiencing is more flood threats in more communities and locations than at any other time this year.’

Thousands of Lismore residents were warned they may need to evacuate on Monday before the Wilson River peaks that night.

‘Consider the consequences of road and bridge closures and water over roads and make alternate arrangements for work, children, and travel,’ the NSW SES stated late Sunday night.

Lismore Council has warned the nearby town of Nimbin is expected to be isolated for up to three days from Monday.

The neighbouring Tweed and Ballina are on also for possible evacuations.

Residents are urged to comply with evacuation orders and are reminded to not drive through floodwaters after the SES rescued 31 people on the weekend.

‘It is better to be inconvenienced for 48 hours and go back when we say it is safe,’ SES Commissioner Carlene York said. 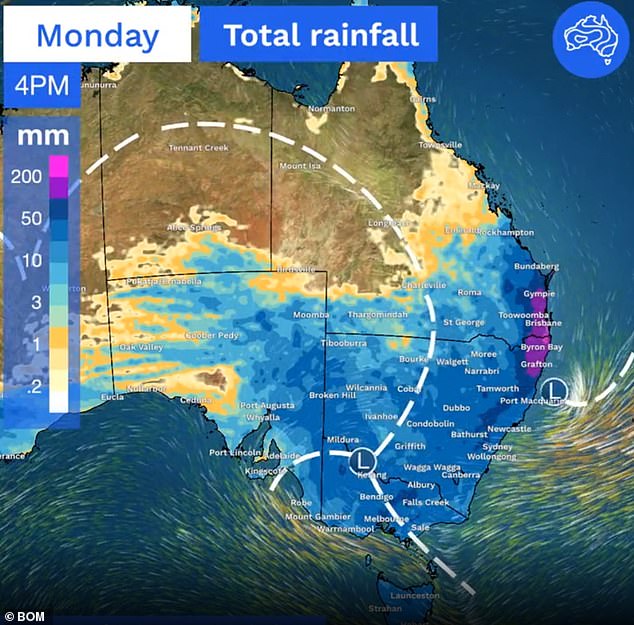 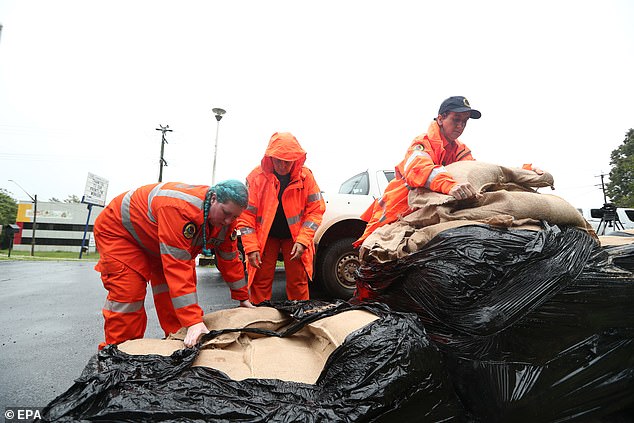 SES volunteers prepare for possible flooding in Lismore, where the Wilson River is expected to peak on Monday night 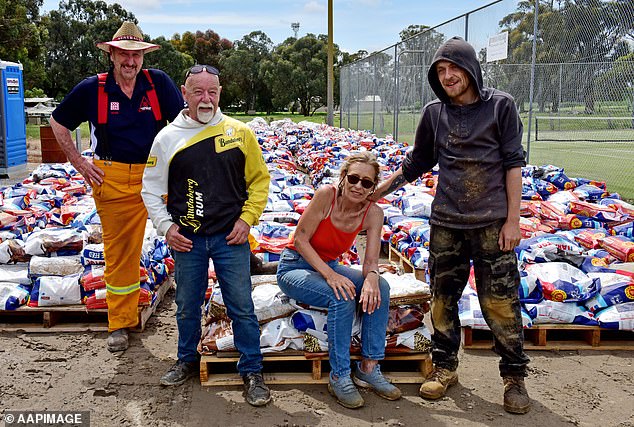 A strong wind warning remains in place from the entire NSW coast on Monday from Byron in the north right down to Eden in the south.

A severe thunderstorm warning will be in place in southeastern and central Queensland on Monday with damaging wind gusts, heavy rain of up to 200mm, and large hail forecast.

A hazardous surf warning for Gold Coast beaches will be in place on Monday with people urged to stay out of the water.

Already still cleaning up from a recent statewide deluge, more heavy rain is on the way for Victoria with falls of between 50mm and 150 mm later in the week as the flooding continues.

Flood levees are being put to the test as swollen rivers approach their peak in the northern Victorian towns of Echuca and Kerang.

The Murray River surpassed the 1993 flood level of 94.77m above sea level in Echuca on Saturday and is forecast to peak about 95m by Monday.

Dozens of homes in and around Echuca Village were door-knocked on Saturday night after water seeped through a levee.

‘Those levees, whilst they’re holding at this point in time, do continue to be a vulnerability for that particular community,’ State Emergency Service Victoria’s Tim Wiebusch told reporters on Sunday. 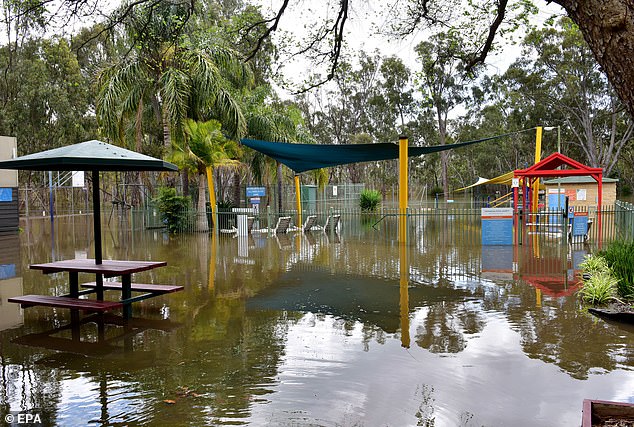 Much of Echuca remains cut off by floodwaters with more rain on the way. Pictured is a flooded caravan park on Sunday 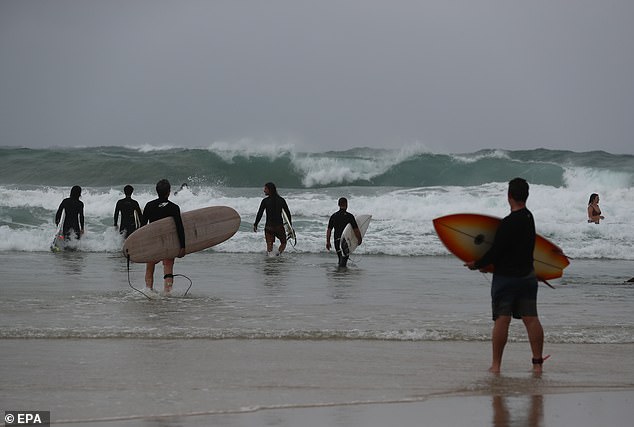 Severe thunderstorms across much of NSW and southern Queensland will bring heavy rainfall until Tuesday. It didn’t stop surfers from braving the wild conditions at Byron Bay on Sunday 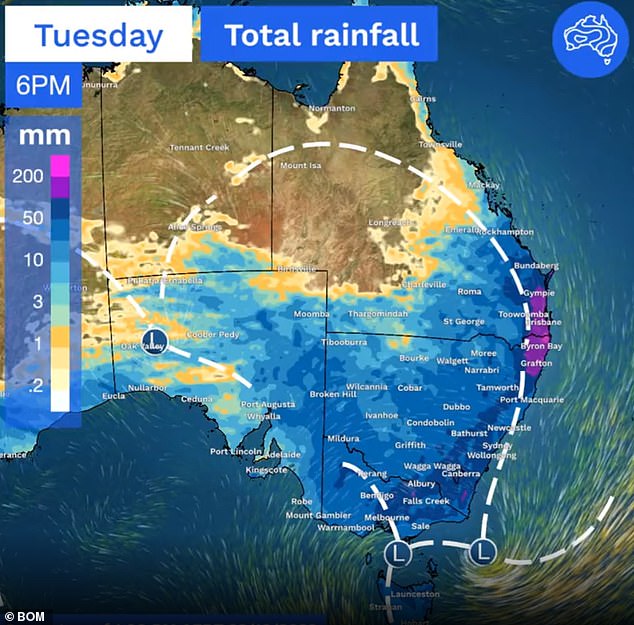 More heavy rain is expected for south-east Queensland and northern NSW on Tuesday before conditions ease. The wettest areas are in purple

Eastern parts of South Australia are also being hit by heavy rain and thunderstorms that will move into western Victoria and NSW.

‘Rain and thunderstorms with heavy falls will spread across Victoria and NSW on Monday, which could lead to renewed river level rises across Victoria,’ the BoM said on Sunday.

‘A low-pressure system over South Australia and near the NSW and Queensland border is combining with a high-pressure system near New Zealand to direct humid tropical air across eastern Australia.’

The weather is likely to become more settled mid-week, though showers will continue in Victoria and Tasmania later in the week.

Far North Queensland and the Top End of the Northern Territory are likely to experience heatwave conditions up to mid-week with a forecast for unusually high temperatures and high humidity.

WeatherZone warned the worst of the wild weather was far from over.

A high pressure system is expected to establish late Friday and early Saturday over NSW , bringing some respite before another low pressure system moves across southeast Australia early next week,’ it said. 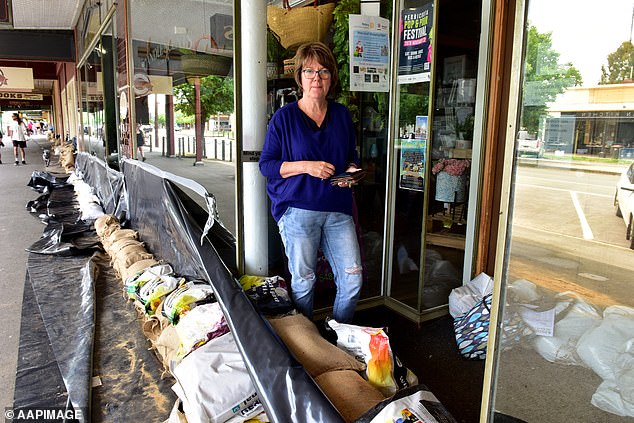 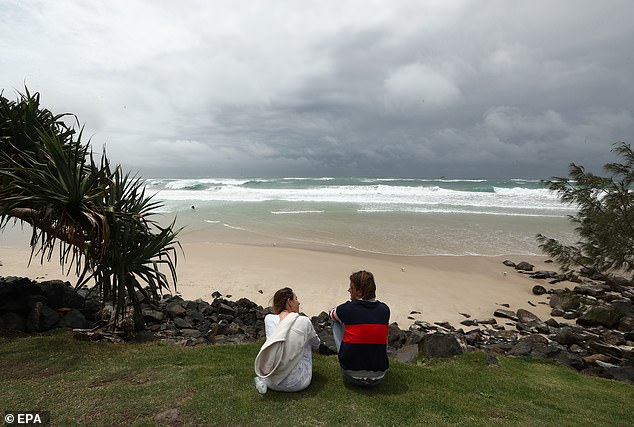 Four states remain on flood watch with some regions forecast to cop up to 200mm of rain in the coming days. They include Byron Bay (pictured on Sunday)