Not all that long ago getting on the grog in the sheds after a Test match was almost a right of passage.

In fact, it can be hard to picture the likes of Shane Warne, Rod Marsh, Doug Walters, the Chappell brothers and other such legends without a beer, or occasionally bubbly, in their hands.

But not anymore. New Test captain Pat Cummins, 28, is setting an example to his teammates by drinking not beer or something sparkling in the sheds – but Kombucha, the drink with a hipster heritage that’s gaining mainstream popularity.

Sometimes the beverage is called kombucha tea to distinguish it from the culture of bacteria and yeast.

Juice, spices, fruit or other flavourings are often added.

Kombucha, a fermented, lightly effervescent drink, is seen by many as a healthier option than alcohol, soft drinks or sport drinks.

But Cummins’ favoured drop may not please one of Cricket Australia’s sponsors – Gatorade.

In October Gatorade and Cricket Australia announce an extension to their current partnership, with, as the press release said, ‘Gatorade to fuel the athletic performance of Cricket Australia for a further three years’.

And none other than Pat Cummins was also quoted in the media release.

‘We all put in an incredible amount of hard work behind the scenes in order to perform at our peak, and Gatorade is such an integral part pre, during, and post-match,’ he said.

‘I am so excited to be a part of the Gatorade family and can’t wait to help drive the extensive grassroots cricket initiatives throughout the summer.’

But Australian cricket’s relationship with alcohol was not always all that it seemed.

For instance, there is far more to the iconic 1971 image of Dennis Lillee  sculling a long neck than meets the eye. 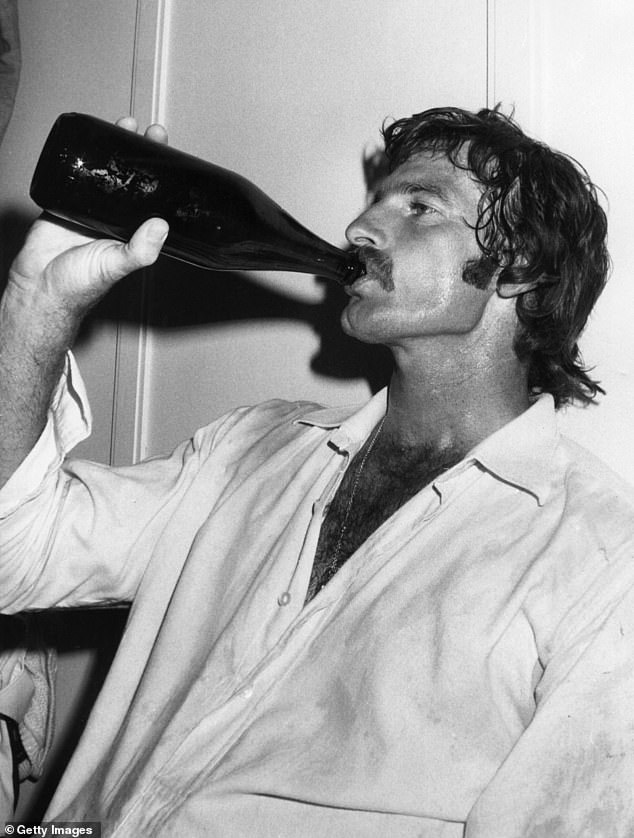 Contrary to what the picture might suggest, Lillee was not a big drinker, despite the heavy drinking culture that surrounded the Australian cricket side at the time.

‘After a long day, bowling thirty odd overs, I would pour a shandy, and I enjoyed that,’ he told News Corp.

‘I used to throw down a few bottles of that right at the end of day’s play. There’s a photo of me necking a long neck, but what people didn’t know was that it had a third of lemonade in it!

‘All sport in those days had a beer culture, I just didn’t like beer, so I didn’t drink. I wasn’t part of the scene if you like, they didn’t treat me badly as a result, but I wasn’t a part of the culture at that stage.’

Another legendary image is one from June 13, 1989, when Australia celebrated their win against England in the First Test in the Ashes series at Headingley – picture dated not only by the choice of beer, but also the primitive set up in the shed. 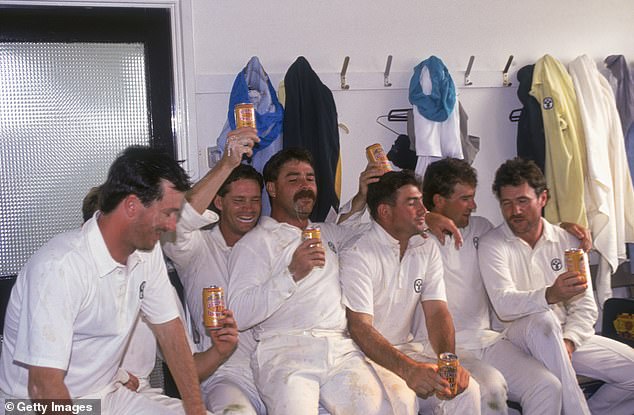 Australian celebrate their win against England in the First Test in the Ashes series at Headingley, June 13, 1989. Tasmanian batsman David Boon is seated third from left.

There are so many shots of Shane Warne with a drink in hand that it can be harder to find an off field shot of him without a drink.

His reputation is so linked to alcohol that last year he launched his own brand of gin.

Australia’s reputation for alcohol goes far beyond the international cricket team, though. 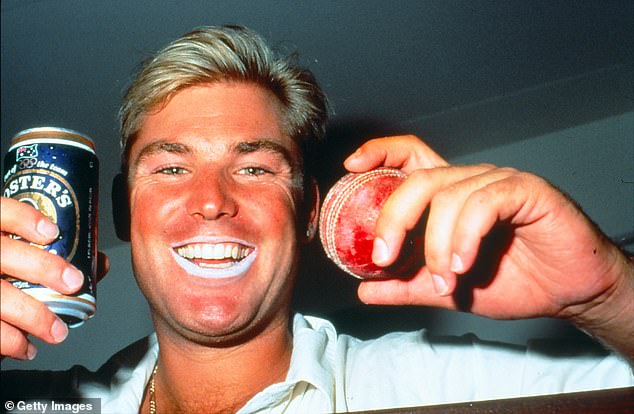 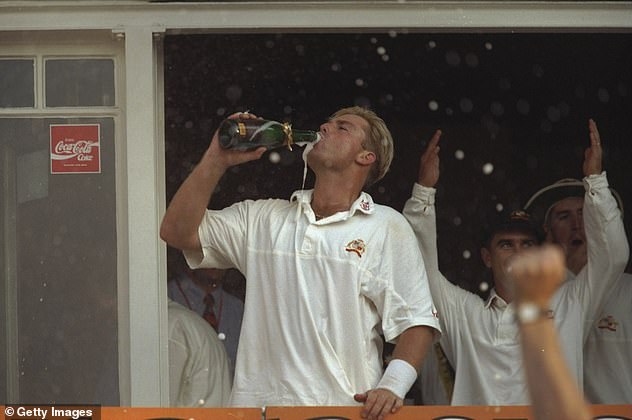 Last week, Australians were named the heaviest drinkers in the world after spending more time drunk in 2020 than any other nation.

The international survey found Australians drank to the point of drunkenness an average of 27 times a year, almost double the global average of 15.

Maybe Pat Cummins is onto something with his abstemious choice of drink.

The quick bowler tore apart the English line-up taking 5 wickets for 38 runs as Australia dominated on day one of the first Ashes test in Brisbane knocking over the side for 148 before rain interrupted play.