Aussie wheelchair tennis legend Dylan Alcott will retire from the sport after the Australian Open in January.

The 30-year-old – who has won 15 Grand Slam titles and is the most successful quad tennis player of all time – announced his retirement from the game on Tuesday.

Alcott is aiming to win his eighth title in a row when he competes in his final ever tournament at Melbourne Park next year.

He won all four Grand Slam singles titles and Paralympic gold in Tokyo this year as part of an unprecedented ‘Golden Slam’.

Number one! Tennis champion Dylan Alcott pictured winning his seventh straight Australian Open quad wheelchair singles title in February. He will retire in January after next year’s version of the tournament

In September, he choked back tears after winning the US Open and becoming the first man in any form of tennis to earn the calendar year honour.

‘Thanks for making the dreams of a young fat disabled kid with a really bad haircut come true because I cant believe I just did it!’ he said.

‘I just cant believe I just won the golden slam!’

The 30-year-old had already called time on his Paralympic career in September.

Alcott started his Paralympic career as a teenager, winning gold with the men’s basketball at the 2008 Beijing Games.

‘When I was 17 I got to go with the Rollers and we won gold and it was life-changing but Paralympic sport in general, it saved my life,’ he told Channel Seven after the medal ceremony. 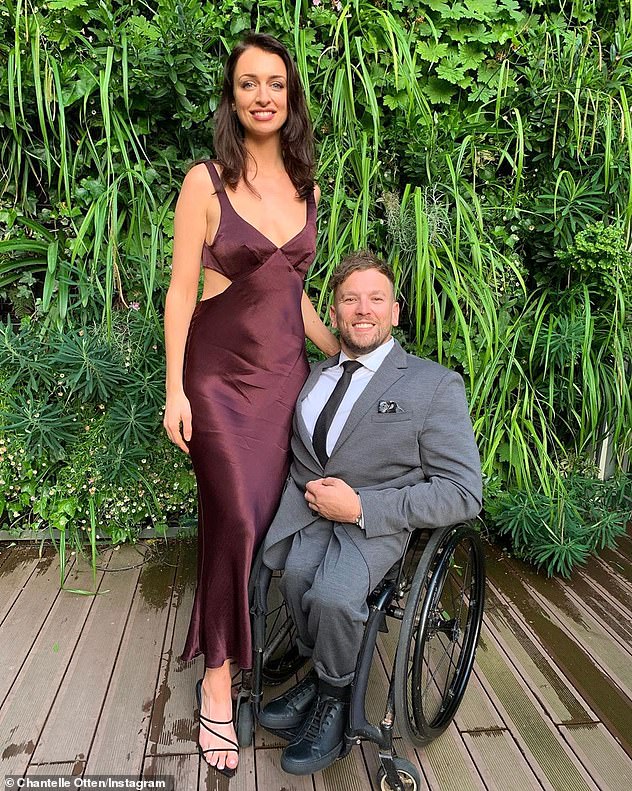 Australian tennis hero Dylan Alcott with his partner Chantelle Otten.  Alcott started his Paralympic career as a teenager, winning gold with the men’s basketball at the 2008 Beijing Games

‘It was the best thing that ever happened to me and I owe it so much so I took a moment to look around because I’m so grateful it came into my life.’

He said he hoped his journey had changed perceptions about people with disabilities and what they could achieve, both in sport and in life in general.

‘Not every person with a disability can be a Paralympian but they can be a doctor, a lawyer, a mum, a dad, a teacher, an educator, politician whatever it is.

‘But they don’t often get the opportunities that we get here to play sport.

‘It means that much to me. It’s huge. And to get it done today is bloody awesome.’