Confronting moment an Aussie bouncer knocks out an American Marine who allegedly said: ‘I could kill you, I’m a trained killer’

A US marine was knocked out by an Aussie bouncer after the American allegedly claimed: ‘I could kill you, I’m a trained killer’, a court has heard.

Dramatic CCTV footage of the confrontation was played to Darwin Supreme Court and showed security guard Hayden Robert Bruce Summers and marine Glen Thomason outside the Monsoons nightclub in Darwin in the early hours of April 11, 2021.

In the footage, Mr Thomason is seen appearing to yell at the security guard.

He then moves his arms across the bouncer’s face and two seconds later Mr Summers strikes Mr Thomason in the face causing him to fall back and hit is head on the ground.

While unconscious, the doorman rolled the marine on his side and into the first-aid recovery position.

Mr Summers has pleaded not guilty to unlawfully causing Mr Thomason serious harm on the grounds of self-defence.

‘The blow that struck Mr Thomason was unlawful in that it wasn’t authorised and it wasn’t justified,’ Mr Rowbottom said, according to NT News.

‘One punch can kill. That was a risk and that man was prepared to take that risk.

‘It could have killed Thomason, but it didn’t, thankfully, because of medical intervention.

‘All of the witnesses gave unchallenged evidence that the US marine was aggressive and engaged in confronting behaviour,’ Mr Maley told the court. 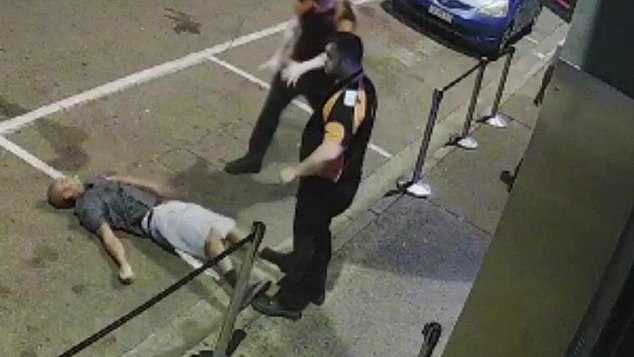 While unconscious, the doorman rolled the marine on his side and into the first-aid recovery position

‘They all say the marine would not leave or calm down and that he yelled and screamed.

‘They all recalled him saying words to the effect of ‘I could kill you, I’m a trained killer, I’m a US Marine. The Crown didn’t suggest that was fabricated or made up.

‘Every witness without exception says Hayden was calm and trying to defuse the situation and he didn’t lose his temper.

‘Clearly it was a forceful slap, but the marine was not punched with a clenched fist or a big haymaker or kicked and there’s no weapon used.

‘This was unplanned and spontaneous. Remember a pre-emptive strike is still self-defence, you (don’t) have to wait to be punched in the head before you can respond.’

The jury will resume their deliberations on Friday.

About 2000 US Marines are stationed at the Marine Rotational Force-Darwin base at the Robertson Barracks and RAAF Base in Darwin.