An Audrey Hepburn lookalike claims she looks so much like the star that some believe she is her reincarnation.

Hannah Barker, from Colchester, Essex, was 15 when she began to be referred to as the Breakfast at Tiffany’s star’s ‘double’ – and she’s even been asked if she’s a relative of Audrey’s.

The 20-year-old, who works as a children’s party performer, said that some can’t even ‘tell the difference’ when she shares comparison shots and passersby often do a ‘double take’ when they see her in the street.

While not convinced by the comparison when she was younger, Hannah now embraces it, and loves nothing more than mimicking the icon’s make-up and outfits.

Hannah’s recreation photos of Audrey’s most famous looks and videos imitating her old-timey accent have amassed thousands of likes, comments and views.

Hannah Barker, 20, from Colchester, Essex, is constantly compared to the star of Breakfast at Tiffany’s Audrey Hepburn (pictured: Hannah recreating one of Audrey’s famous pictures) 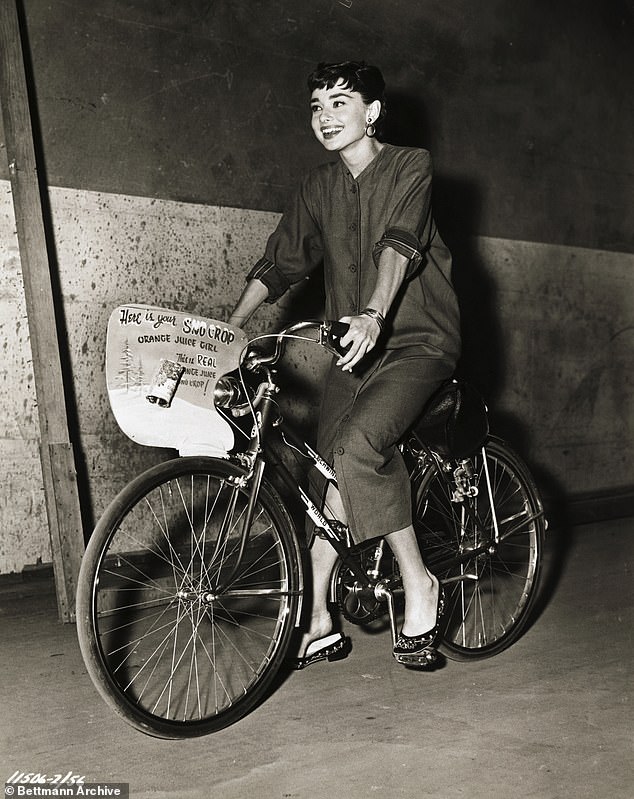 Hollywood legend Audrey Hepburn, who died in 1993 from cancer of the colon, pictured riding her bike in 1971

Hannah said: ‘I just have her face – it’s a weird coincidence that the universe has decided.

‘I’ve been really insecure about the way I look for years, and to now be compared to one of the most beautiful people to have ever lived daily is such a weird turn around.

‘I’ve been told that I’m her double and been asked so many times if we’re related, and as far as I’m aware I’m pretty sure we aren’t – and people are like “are you sure? Have you checked?”

‘I’ve been told that I’m her reincarnation a lot of times. I’ve posted pictures and people can’t tell the difference between which one is me, and which one is her. 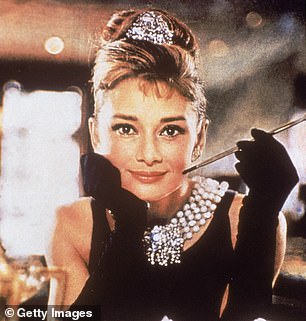 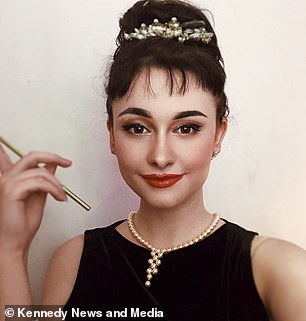 Hannah, right, likes to cosplay as Audrey Hepburn, recreating some of her most famous styles, including her Breakfast at Tiffany’s’ hairdo (left)

‘There’s been times where I’ve just posted a normal selfie and strangers have said I look like her and I’m like “yeah, I get that a lot”.’

Hannah got a full fringe at the age of 15, but wasn’t convinced when people compared her to the film icon – until one day she decided to do Audrey Hepburn inspired makeup.

Hannah said: ‘I thought maybe I do actually kind of look like her and then posted pictures on Facebook and all my friends were a bit shook by it.

‘Then I started recreating all of her iconic outfits – I did a Roman Holiday photoshoot and her Breakfast at Tiffany’s look – in public people would give me a double-take.

‘I love to recreate her casual looks and pictures of her that are less common – those are the most fun. 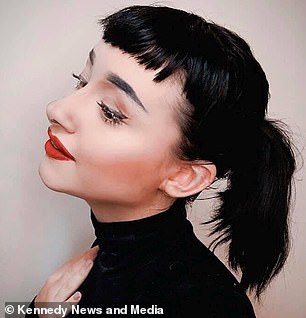 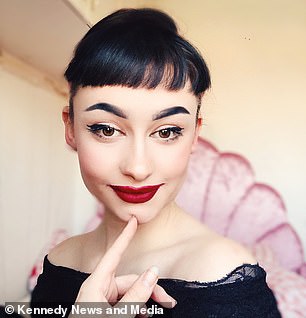 The child party performer said she could look like Audrey Hepburn day-to-day if she wanted to, but likes to cultivate her difference with another style of makeup and hairstyle

‘Every single look I’ve done so far has been using thrifted clothes or those I already own – I love her outfits in Funny Face and want to recreate all of them when I can afford it.

‘I’ve been doing TikTok imitations of her – I’ve basically nailed her accent and mannerisms.

‘It’s kind of like a party trick, but for online – a fun fact I get to say about me is that I look like Audrey Hepburn.’

Hannah’s day-to-day look is ‘totally different’ as she admits she does try to cover up how much she looks like the star.

When mimicking Audrey’s makeup, she puts the most effort into her eyebrows but also wears winged eyeliner, styles her hair, and contours her cheeks to replicate Audrey’s prominent face structure. Hannah said: 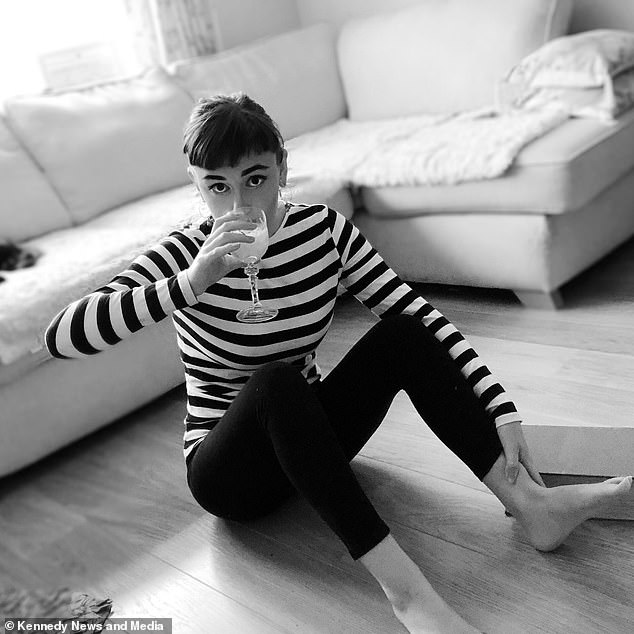 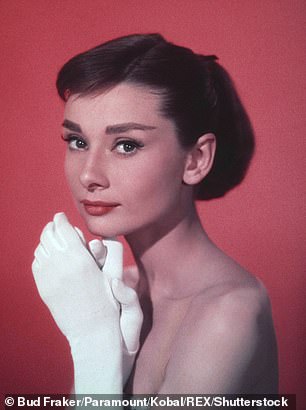 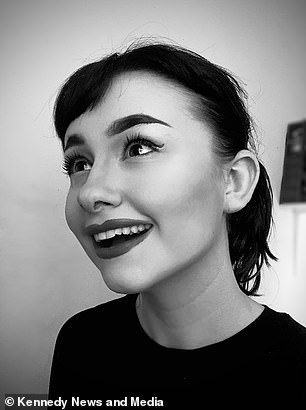 Hepburn was known for her doe-eye eyeliner and her fringe. Hannah recreated some of her best-known looks

‘Normally I wear heavy makeup and I guess I cover up how much I look like her with my normal look.

‘If I wanted to look like her everyday I could – but I’m very much myself and it’s just a fun cosplay thing for me.

‘She’s my favourite person to dress up as because I know I look like her the most, and it’s quite rewarding in that sense and gives me a lot more confidence in what I’m doing.

‘I’m a lot shorter than her and a little bigger as she had a 20-inch waist – but I’m genuinely investing in a corset to train my waist to that size because I want to be that accurate.

‘I really like the look that she did when she was younger and part of me always wanted to go all out and get the pixie cut, but I don’t think I can commit that much yet.’ 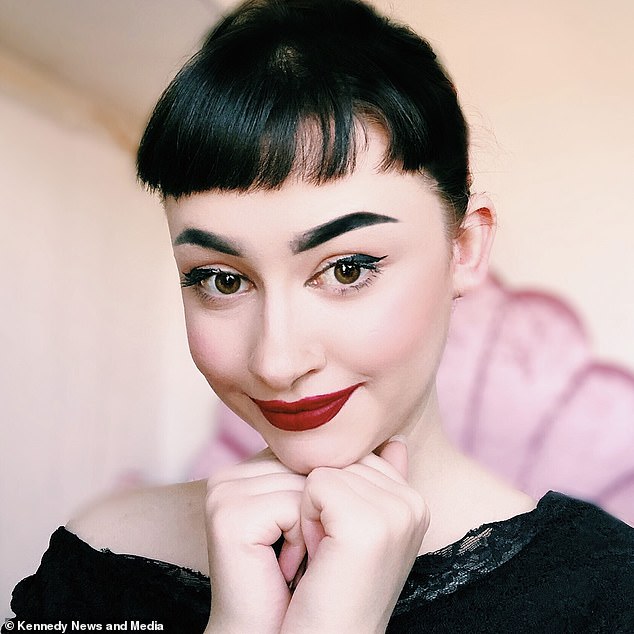 With her doe-eyed makeup and dark red lips, Hannah looks just like Audrey Hepburn in a Roman Holiday

Hannah’s who’s been a performer for the past five years said her ultimate dream would be to play Audrey in a film, as well as do photoshoots in iconic locations such as Rome and Paris.

Hannah said: ‘I’ve been told a lot of times that I should go into performing as her – if they ever did a film again, I would 100 percent audition – even if it was just a fan-made one. 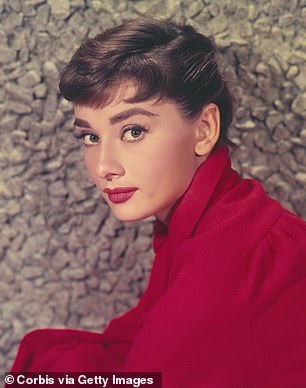 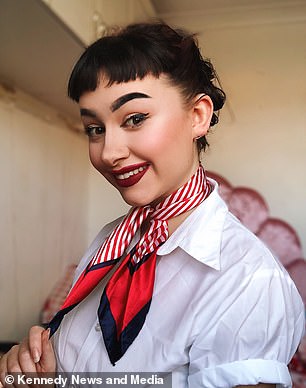 Hannah has managed to capture Hepburn in several of her roles. Pictured left: Hepburn on the set of Sabrina. Right: Hannah as Hepburn in a Roman Holiday 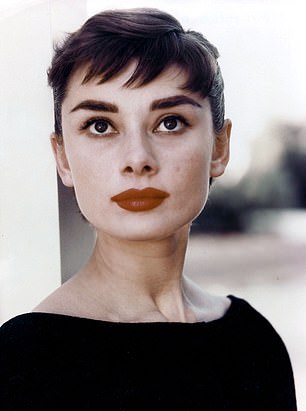 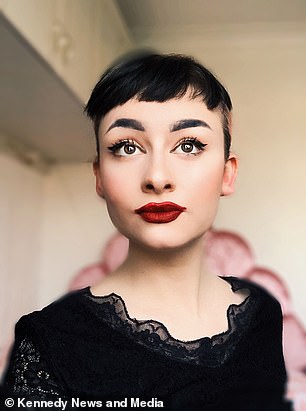 While Audrey Hepburn, left in Funny Face, was known for her incomparable style and poise, Hannah (right) does her best to emulate the Hollywood legend 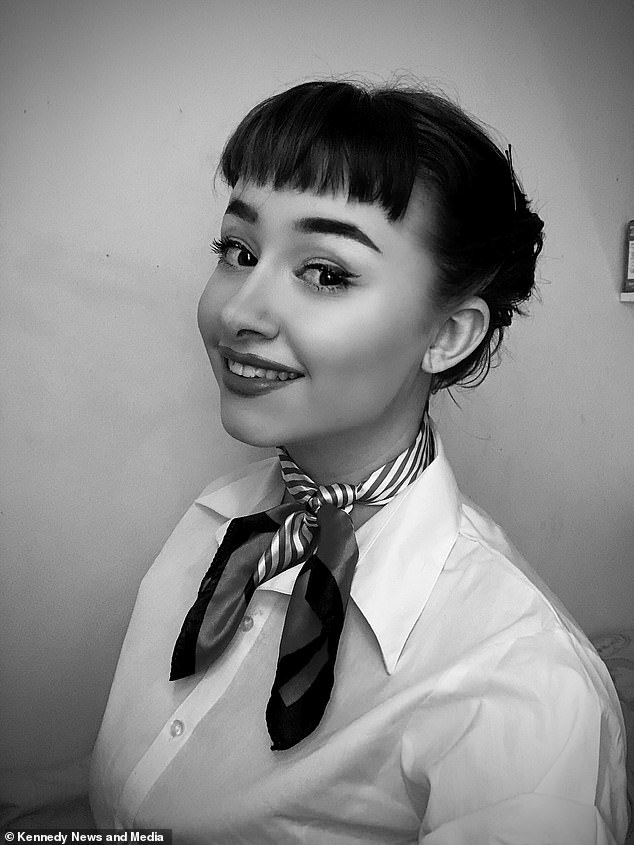 It all started when Hannah, who was amused by some of her friends’ remarks, decided to dress up as Hepburn in A Roman Holiday 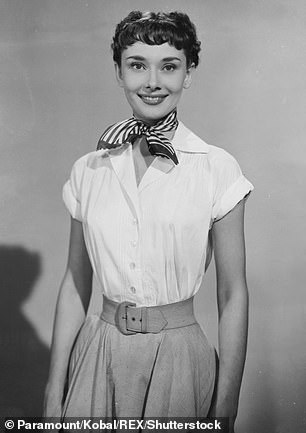 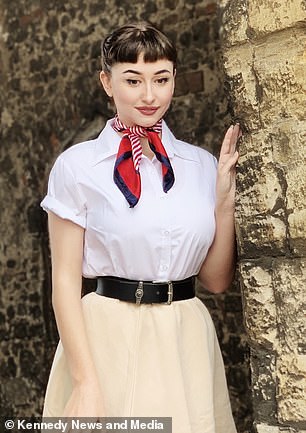 In both black and white and colour snaps, Hannah, pictured right, recreated the pose and looks of Audrey Hepburn (left) in Roman Holiday, 1953 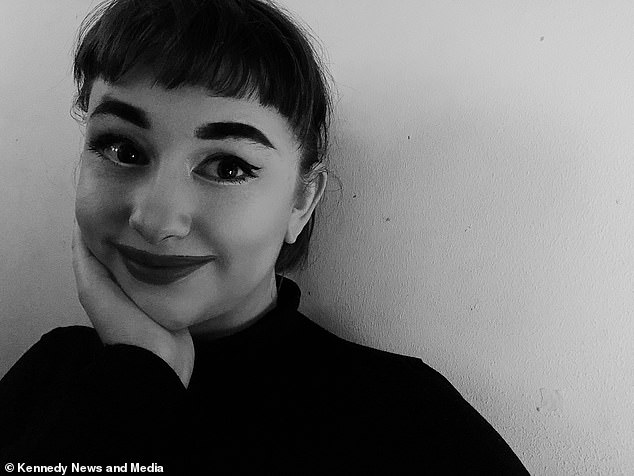 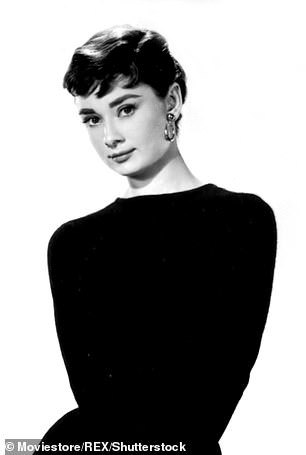 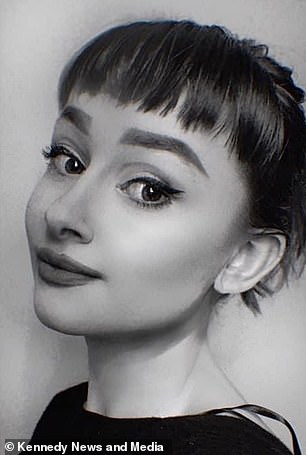 The performer, right, said she dreams of playing Hepburn, pictured left, in a biopic on the actress if the chance presented itself

‘I really want a tattoo of Audrey because of how much she’s impacted me – I genuinely love her so much and know I want to carry her with me forever.

‘I do get a lot of people saying that if she was still alive she would love what I’m doing – I hope that she would anyway, because she inspires me a lot.’ 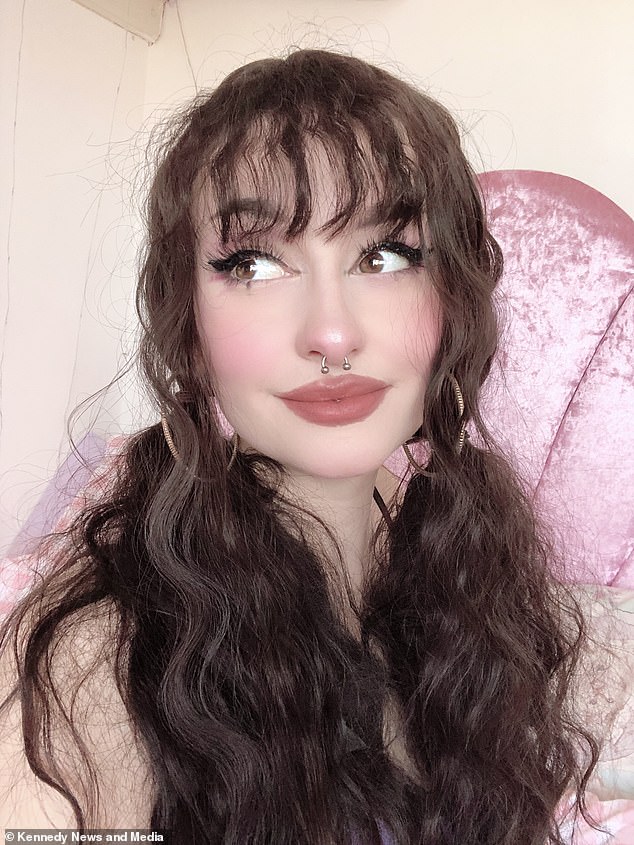 In her everyday life, pictured,  Hannah, who likes to experiment with hair colour and makeup, could not look more different from Audrey Hepburn 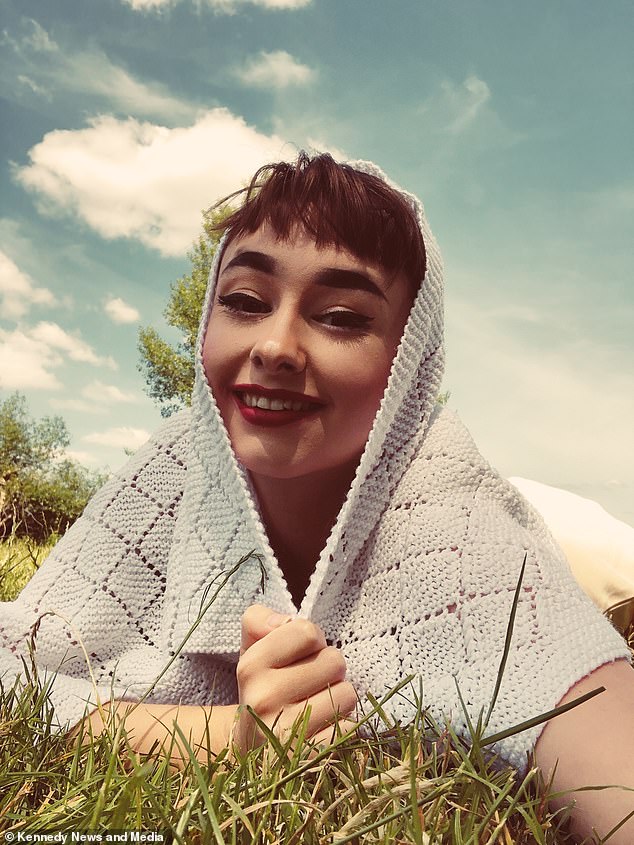 Hannah admitted she felt insecure about her looks for a long time before the resemblance with Audrey was noted by some people, which made her feel more confident