Aubrey Plaza was spotted arriving to NBC Studios in New York City on Saturday ahead of her SNL hosting gig.

The 38-year-old Parks And Recreation alumna sported a pair of square-shaped glossy black sunglasses as she stepped out of an SUV.

The White Lotus actress’ bleach blonde hair was in a side part as it dusted her shoulders.

Getting ready: Aubrey Plaza was spotted arriving to NBC Studios in New York City on Saturday ahead of her SNL hosting gig

The longtime entertainer kept warm in a long, beige, wool trench coat with large side pockets and a popped collar.

She had multiple tote bags over one arm and also carried a deep purple leather purse crossbody-style.

The performer, who has an improv background, was makeup free underneath her shades and she wore a black turtleneck. 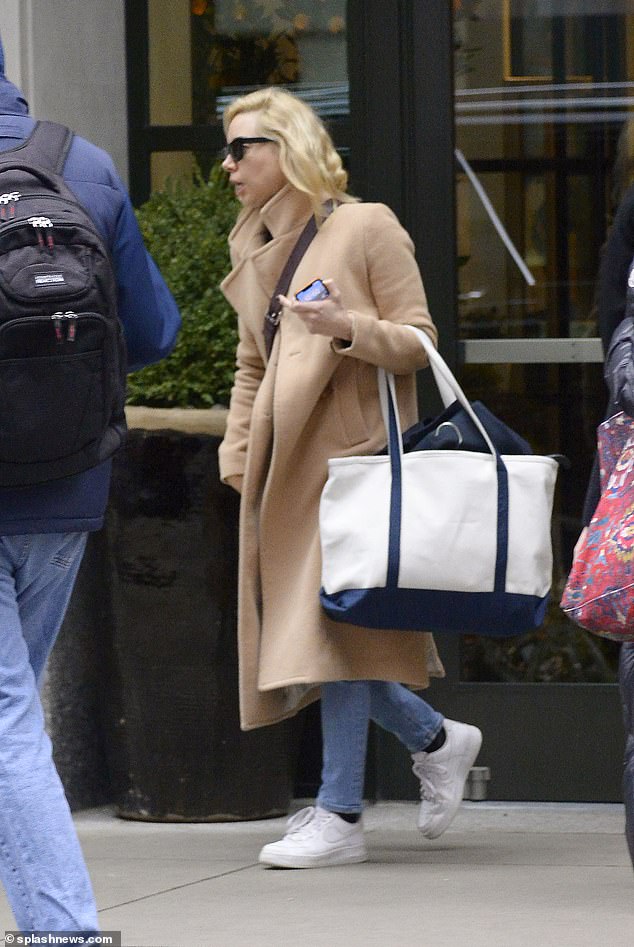 Glam: The 38-year-old Parks and Recreation alum sported a pair of square-shaped glossy black sunglasses as she stepped out of an SUV

Days ago Plaza engaged in a steamy make-out session in a promotional clip for her imminent late night hosting duties.

In a departure from more low-key SNL promos, the clip was more tightly edited and cinematic.

It started with SNL regular Chloe Fineman showcasing her signature impressions, which inspired Aubrey to reveal some of her own impressions before leaning in for some passionate kissing while revealing that she has dreamed of hosting SNL since she was a kid. 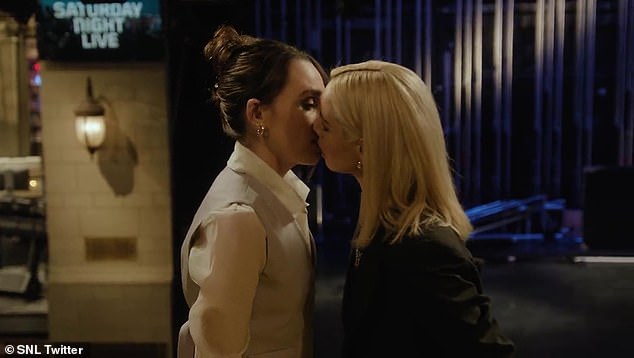 Steamy: Aubrey had a surprise make-out session with Saturday Night Live star Chloe Fineman in a new promo for her upcoming episode 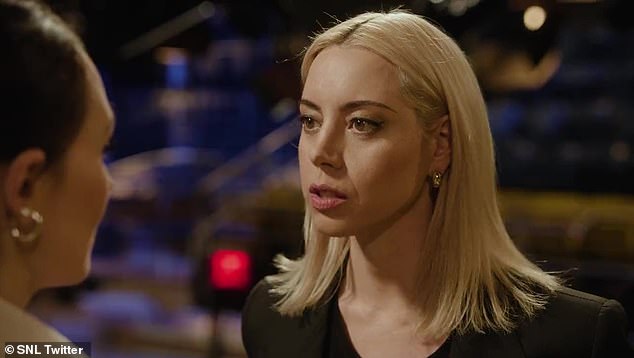 First time: The White Lotus star is set to make her hosting debut on the iconic sketch comedy show on Saturday, January 21

‘Oh my God, I love your impressions,’ Aubrey gushed after Chloe checked in with her about her upcoming hosting job while they chatted in the audience bleachers.

‘Drew Barrymore is my favorite,’ she said, following her buzzy interview on the actress’ daytime talk show.

‘But Chloe, you’re not the only one who can do impressions,’ Aubrey replied slyly. ‘You’re gonna love this one.’ 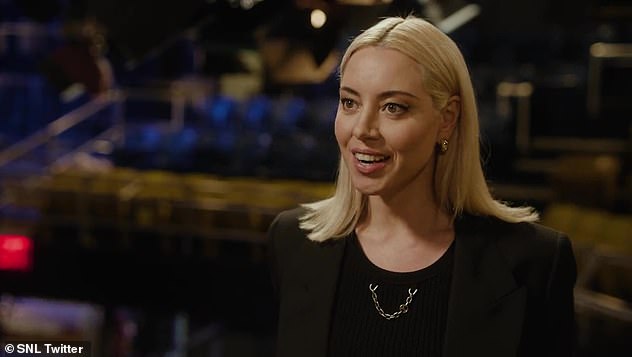 Aubrey set the bar high for her upcoming stint: ‘Oh my God, I love your impressions,’ Aubrey gushed while chatting with Chloe in the audience bleachers

But instead of doing something light and humorous, she recited one of Marcia Gay Harden’s brutal and impassioned monologues from the 2000 drama Pollock, which starred Ed Harris as the legendary abstract expressionist painter Jackson Pollock.

‘We’re painters, Pollock. We don’t have any money! And you — you need, you need, and I am not gonna bring a baby into that!’ she screamed, while Chloe looked shocked and couldn’t place the lines.

‘It was a little intense,’ she said. ‘Do you have anyone that’s like, a little bit more fun?’

A beaming Aubrey agreed to try out another impression, though it wasn’t any lighter than the first one. 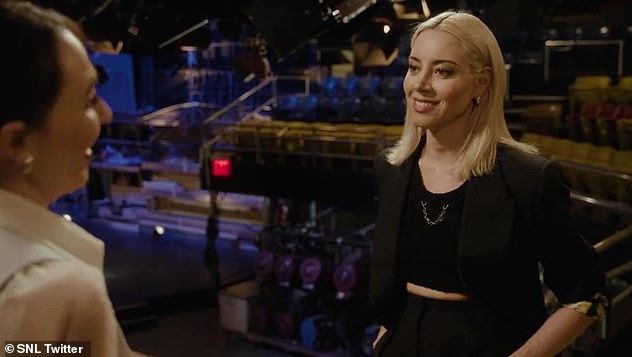 On different pages: ‘Yes, you got it!’ said Aubrey, sounding bubbly and oddly upbeat after Chloe guessed it correctly 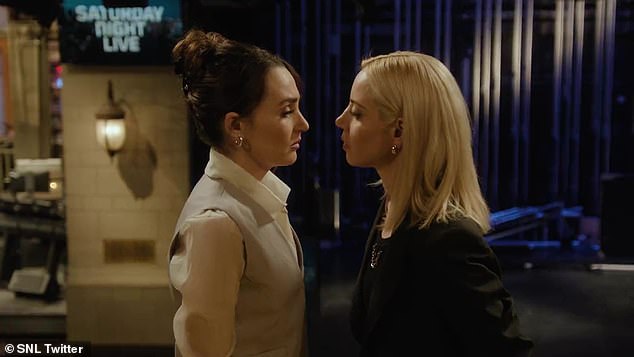 Change of tone: ‘Why are you like this?’ Choe said, sounding more concerned. Then dramatic strings suddenly popped up on the soundtrack as Aubrey replied, ‘Because I’m insane and I’ve been waiting to do this show since I was twelve-years-old’

She started to shout and slap herself in the face, which Chloe recognized as Annette Bening’s dark scene from American Beauty following a failed attempt to sell a house.

‘Yes, you got it!’ said Aubrey, sounding bubbly and oddly upbeat.

‘Why are you like this?’ Chloe said, sounding more concerned.

Dramatic strings suddenly became audible as Aubrey replied, ‘Because I’m insane and I’ve been waiting to do this show since I was twelve-years-old.’

Chloe replied, ‘What’s happening?’ as Aubrey approached her for a dramatic kiss.

But then the music cut out and the camera shifted to a janitor pausing his vacuuming to watch the two women making out above him on the bleachers. 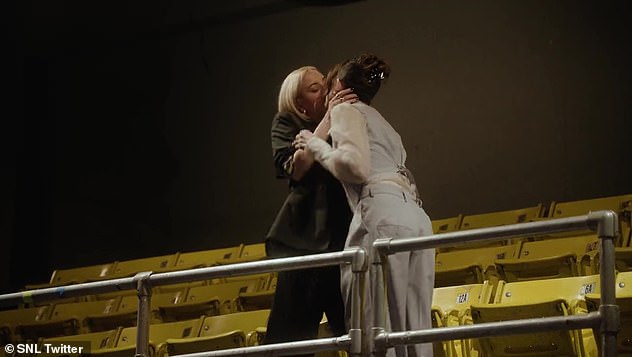 Going for it: Chloe replied, ‘What’s happening?’ as Aubrey approached her for a dramatic kiss 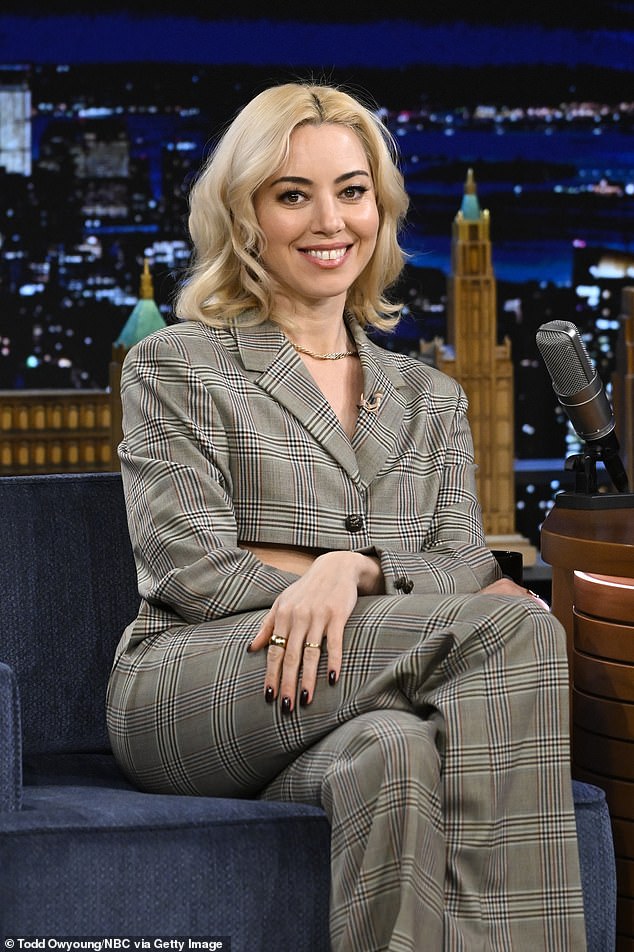 Buzzy: Aubrey has had a busy fall/winter season as audiences fell in love with her White Lotus character Harper; pictured on The Tonight Show last week