Atletico Madrid bounced back from their Champions League exit as Yannick Carrasco scored a penalty 10 minutes into stoppage time to earn a dramatic 2-1 win over Espanyol.

Carrasco converted from the spot after Diego Simeone’s side were awarded a penalty by VAR.

The Belgian had earlier put Atletico ahead before they had Geoffrey Kondogbia sent off for a second bookable offence and Raul de Tomas then equalised for the visitors. 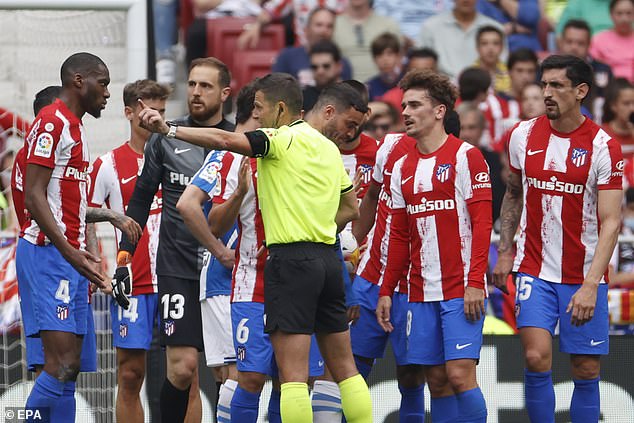 Victory boosts Atletico’s chances of qualifying for next season’s Champions League as it moved them level on points with third-placed Sevilla, who take on Real Madrid later tonight.

Atletico’s Champions League elimination had been preceded by a shock La Liga defeat to struggling Mallorca, which ended a run of six straight wins.

The reigning Spanish champions were lethargic in the first half but took the lead early in the second when Carrasco broke the deadlock.

The tide of the contest turned when Kondogbia was controversially dismissed after being given a second yellow for handball, and Espanyol made use of their one-man advantage to level through De Tomas.

That looked to have been enough to give Espanyol a point before Atletico were awarded a penalty 10 minutes into stoppage time following a lengthy VAR check for handball against De Tomas.

Carrasco stepped up to score the penalty and hand Atletico all three points.