At least seven demonstrators died and 151 cops and demonstrators suffered injuries during a night of unrest, mainly in Colombia’s capital Bogotá, on Wednesday after a 46-year old soon-to-be lawyer and father-of-two died in police custody.

Footage of the unrest showed a group of protesters angry over the death of Javier Ordóñez charging at and attacking two cops with objects in Bogotá before several other joined in and kicked the defenseless officers.

The defense ministry said 55 demonstrators were hurt and hospitalized. At least 87 of the 96 cops injured were assigned to the Bogotá police department. A total of 56 police precincts were damaged and 53 centers for emergency response were destroyed.

‘I want to reiterate the pain caused by the death of Javier Ordóñez, as well as the repeated feeling of solidarity with his family members, with whom progress will be made in establishing contacts and, of course, in defining actions that materialize that feeling of solidarity that he has today the Colombian Government and our compatriots as a result of his death,’ defense minister Carlos Holmes Trujillo said Thursday.

Javier Ordóñez died at a hospital Tuesday night in Bogotá, Colombia, after he appeared in a video in which he was tasered and beaten by two police officers 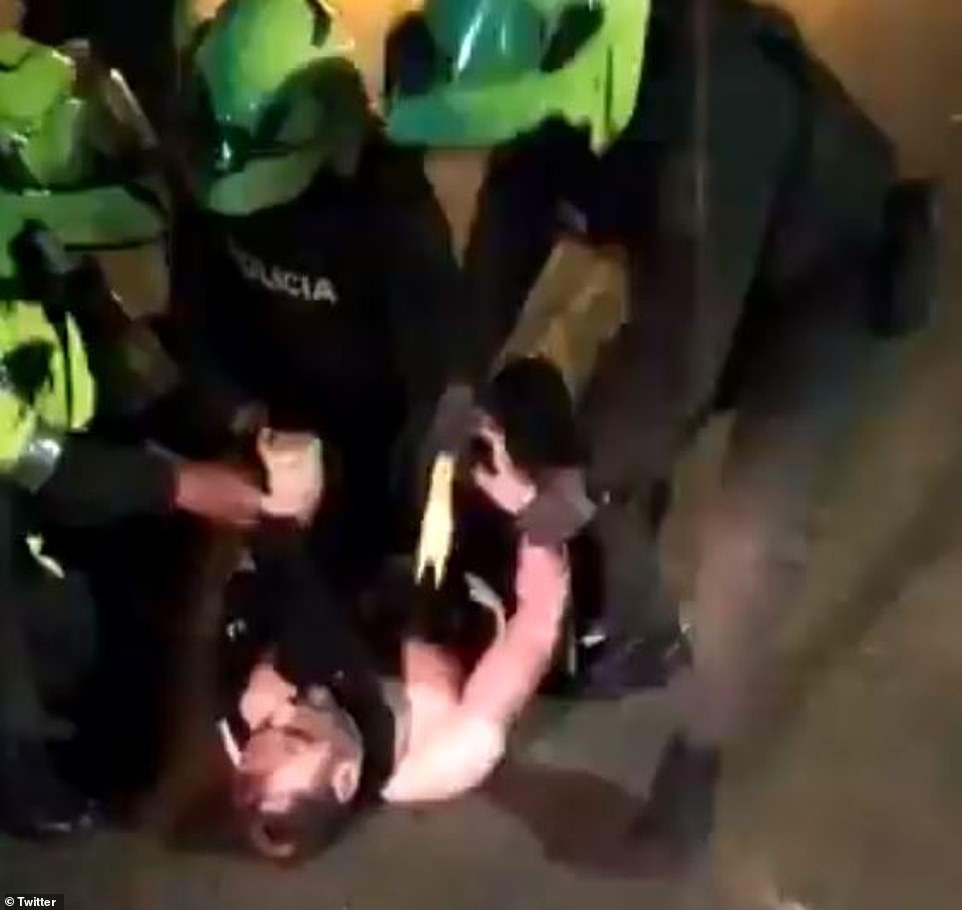 Two cops have been suspended from the Bogotá metropolitan police after they were caught on video repeatedly beating, kneeling on and tasering Javier Ordóñez on Tuesday 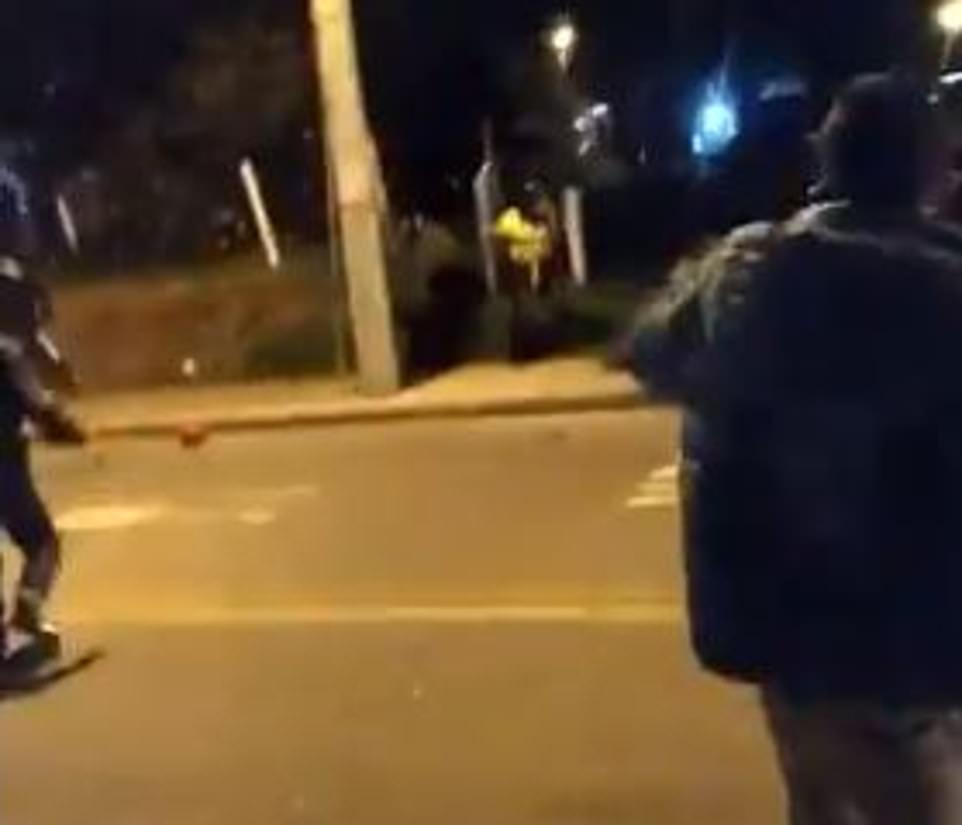 Protesters rush towards one of two cops who were recorded being beaten after demonstrations turned violent in Bogotá, Colombia, on Wednesday, one day after a man died in police custody

Tensions flared as demonstrators clashed with cops over the death of Ordóñez on Tuesday after his friend, Juan David Uribe, filmed two cops beating and tasering him as he cried for mercy.

Ordóñez, Uribe and a group of friends had ran out of liquor and were returning from a local store when they were stopped by the two cops.

Uribe said in an interview with RCN TV on Wednesday that one of the police officers told Ordóñez that he wouldn’t get off easy this time around, in reference to other times that the cop had stopped him for drinking in public.

Uribe added that Ordóñez asked the cop to just provide him with a summons, acknowledging that he was breaking social distancing rules to drink in the street.

Video shows the two cops kneeling on Ordóñez as he was lying on the road pavement while the cops used a Taser as they struggled to handcuff him.

Ordóñez can be heard in the video screaming for mercy, shouting ‘por favor, no más [please, no more]’ as the two cops continued to electrocute him.

One of the police officers can be spotted in the video repeatedly hitting Ordóñez in the head with an object. 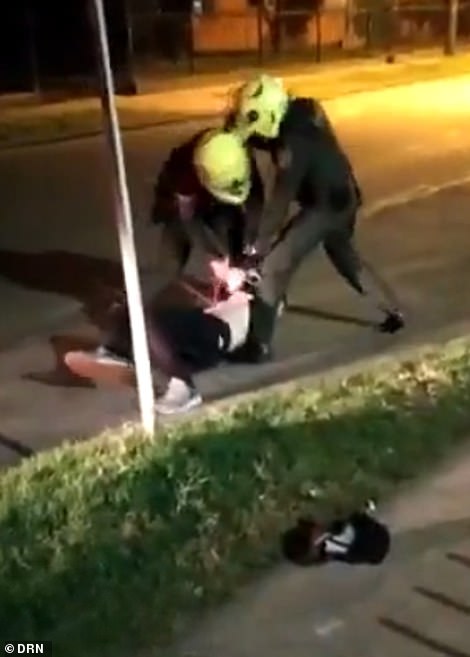 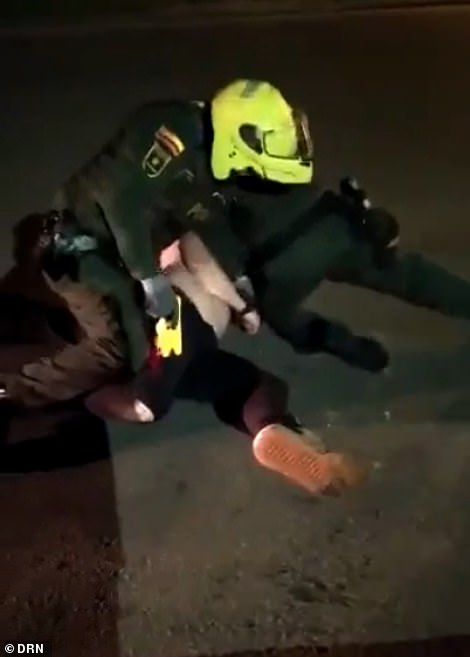 Javier Ordóñez, 46, a soon-to-be lawyer and father-of-two from Colombia, died in police custody shortly after he was filmed being repeatedly electrocuted by officers as he was arrested 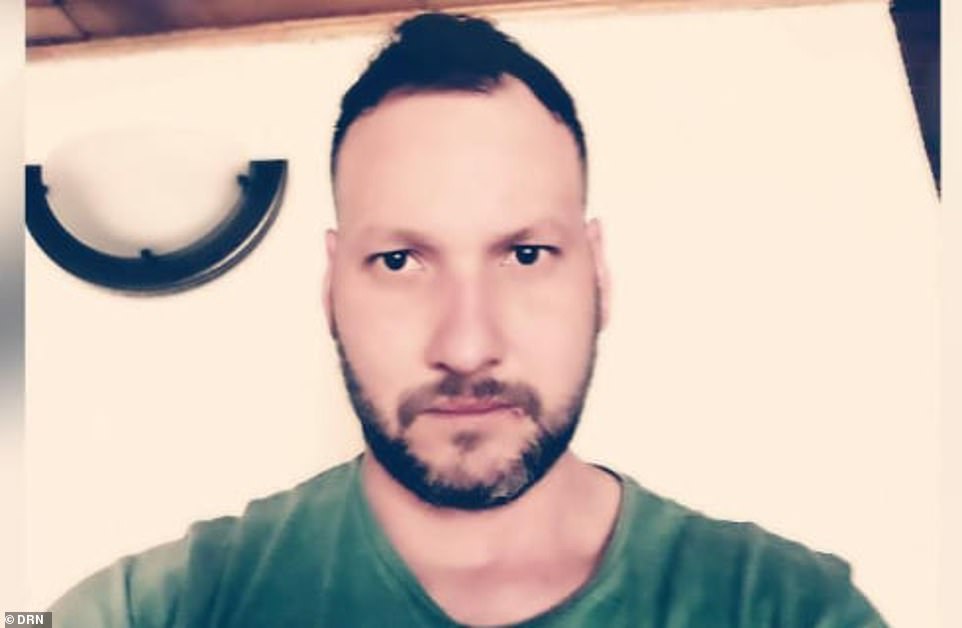 Police say Ordóñez was drinking in the street in violation of social distancing rules when he was stopped by two officers, who accused members of his group of ‘being aggressive’ 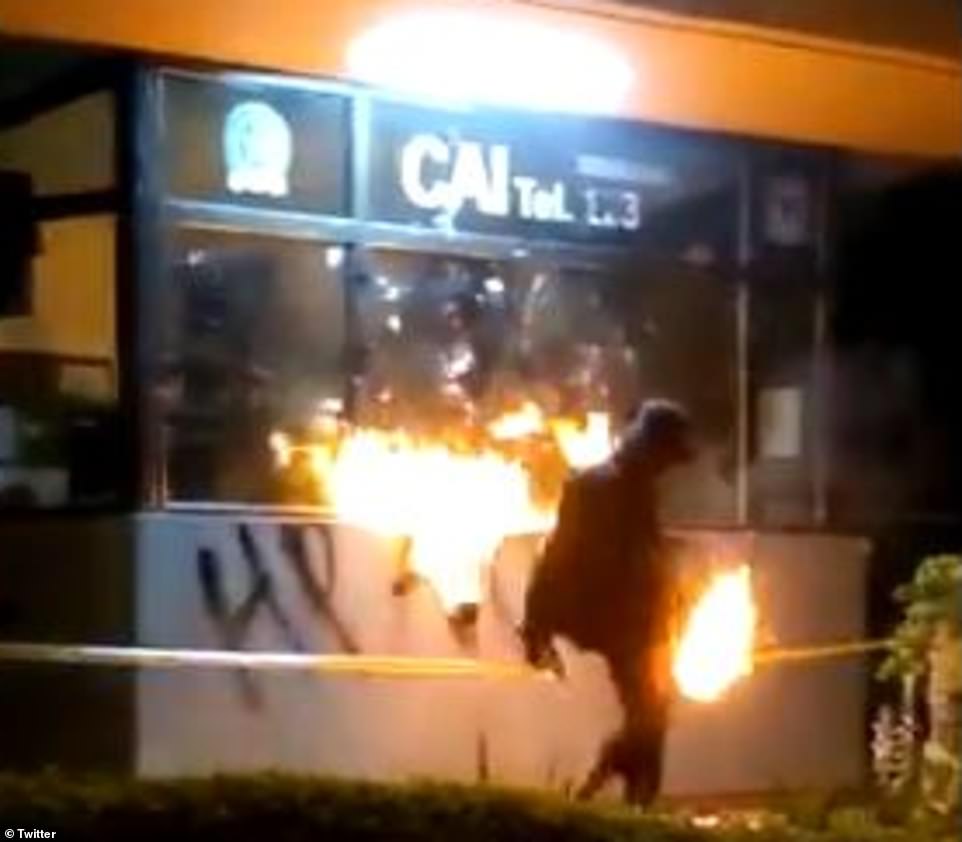 Uribe can be heard telling the cops to stop and saying, ‘they’re going to kill him’.

A second version of the video showed Ordoñez being led into a police vehicle before he was subsequently taken to a police station where his friends and family allege he was subjected to more abuse.

From there he was taken to hospital, where he died of his injuries, which Uribe said was confirmed by a doctor he spoke to about five minutes after he arrived at the medical facility.

Ordóñez is the father of two boys, aged 11 and 15, and was about to graduate from law school after having already earned a degree in aeronautics.

Bogotá Metropolitan Police’s Colonel Guillén Alexander Amaya Olmos said officers were called to reports of a fight in the street by concerned neighbors.

Olmos said that officers arrived to find eight ‘intoxicated’ people in the street, and that when they tried to break up the fight, some of the people became aggressive.

‘It was necessary for the police to restrain them,’ he said, according to Semana.

He added that a number of people were taken to the local police station, where one suffered health problems and was taken to hospital.

Olmos said the person was pronounced dead on arrival.

But those who were with Ordóñez have disputed the police account – saying there was no fight, and they encountered the officers while going to buy more drinks.

The two officers involved in the arrest have since been suspended, and an investigation launched by the prosecutor’s office. 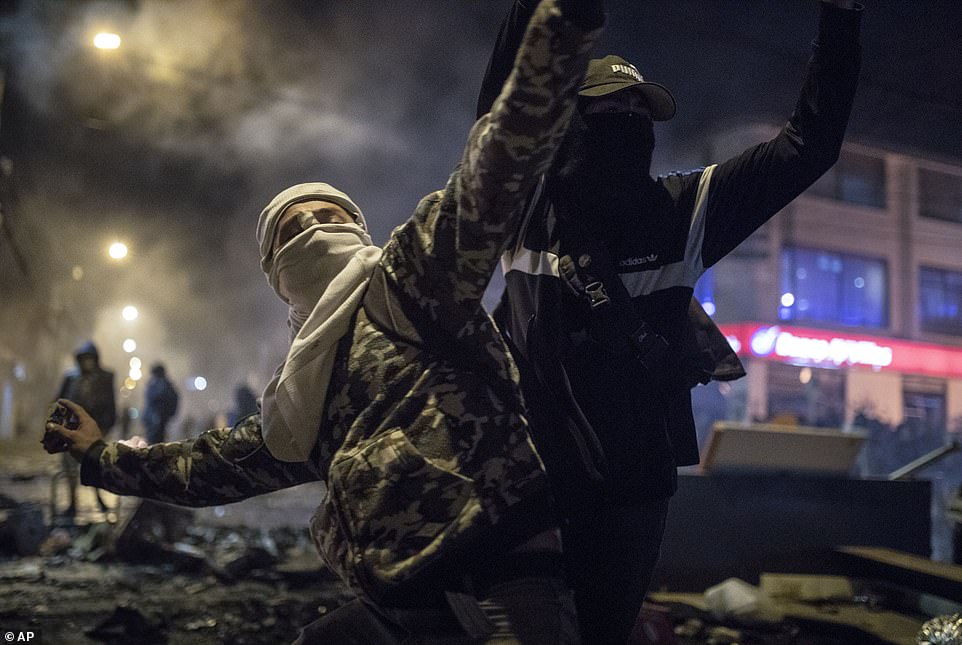 The death sparked protests in several Colombian cities, with demonstrators in Bogotá using rocks, bins and sticks to attack the police building where Ordóñez was held 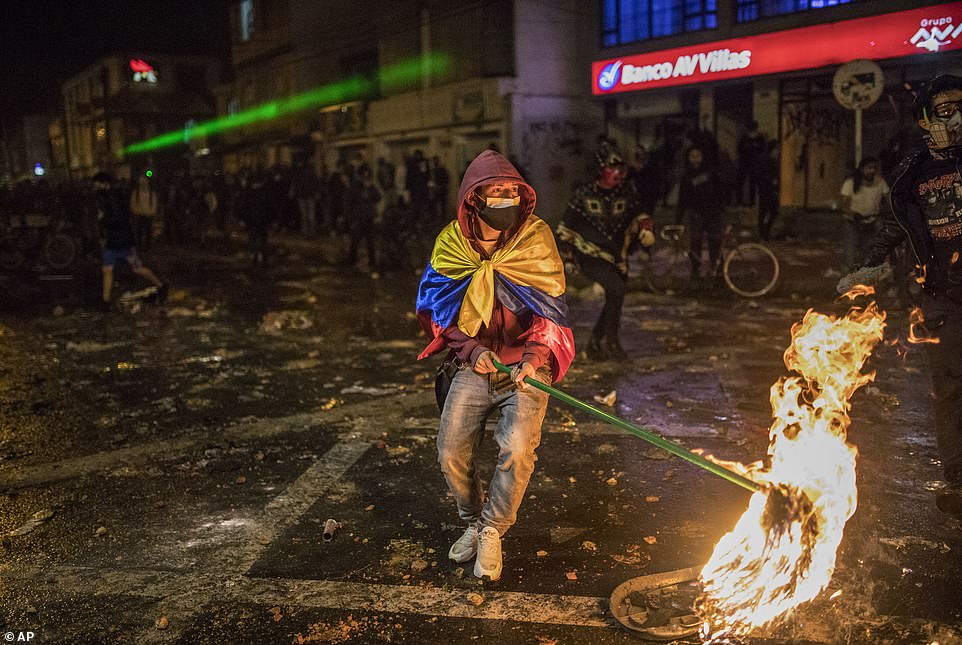 Demonstrators clash with police outside the station where Ordóñez was taken shortly before he died in Bogotá, Colombia 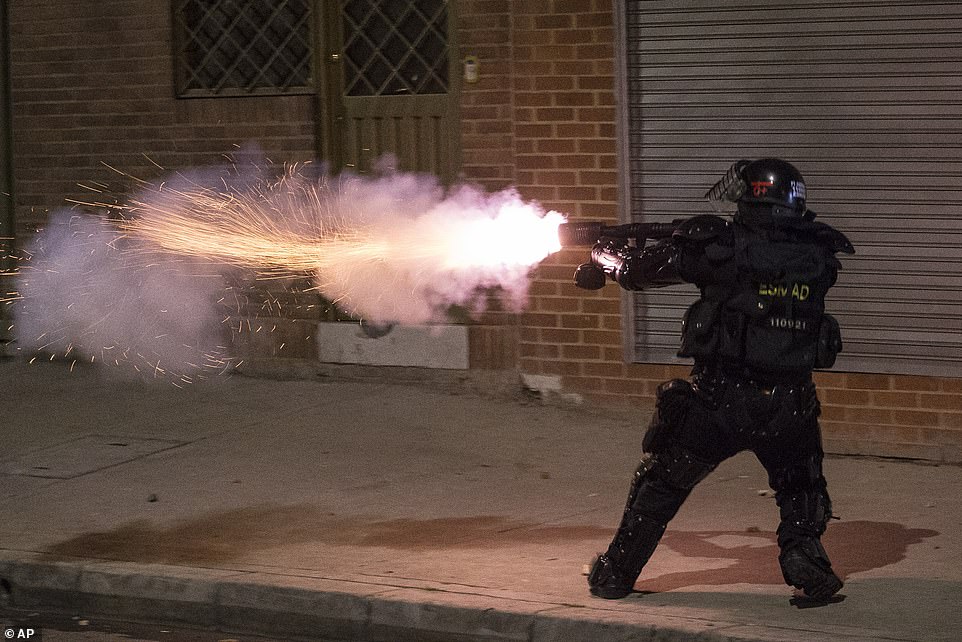 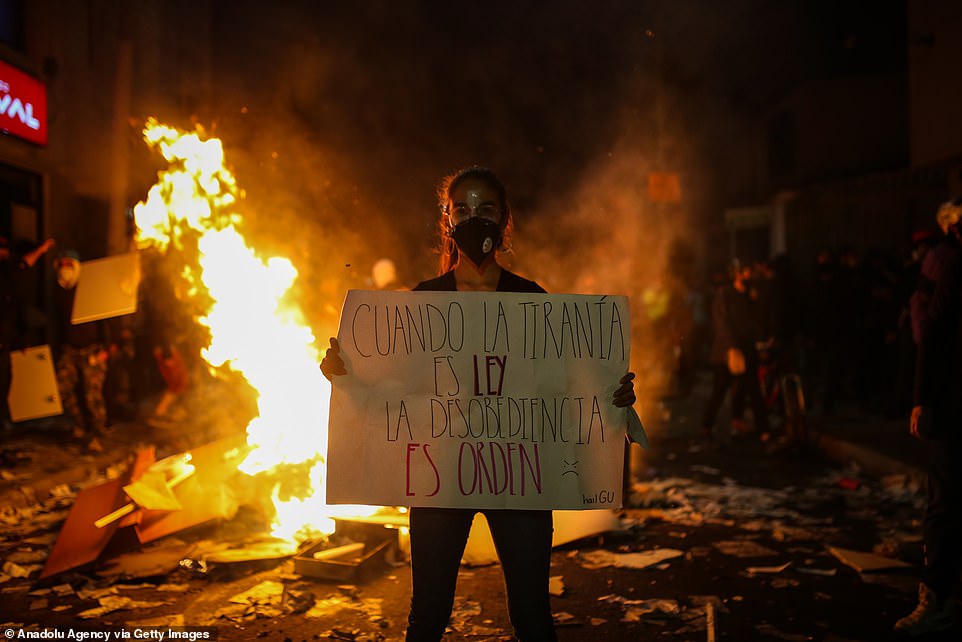 A woman holds a sign which reads ‘when tyranny is law, disobedience is order’ amid violent demonstrations over the death of Javier Ordóñez in Colombia

Bogota’s mayor Claudia López quickly condemned the death as an example of ‘unacceptable police brutality’ in a Twitter message.

She pledged a full investigation, and an ‘exemplary sentence’ for anyone found guilty.

‘This is not just bad apples. Life is sacred,’ she added.

Ordóñez death comes in the wake of the killing of George Floyd, an American man who also died while being arrested by police.

His death sparked a wave of Black Lives Matter protests around the world, as people called for an end to racial discrimination and the defunding of police services. 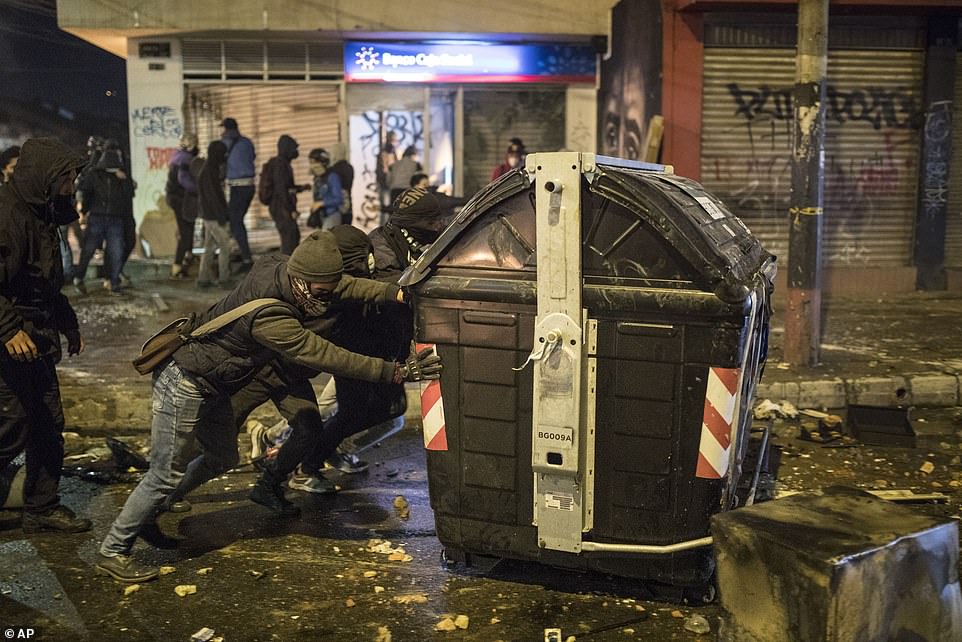 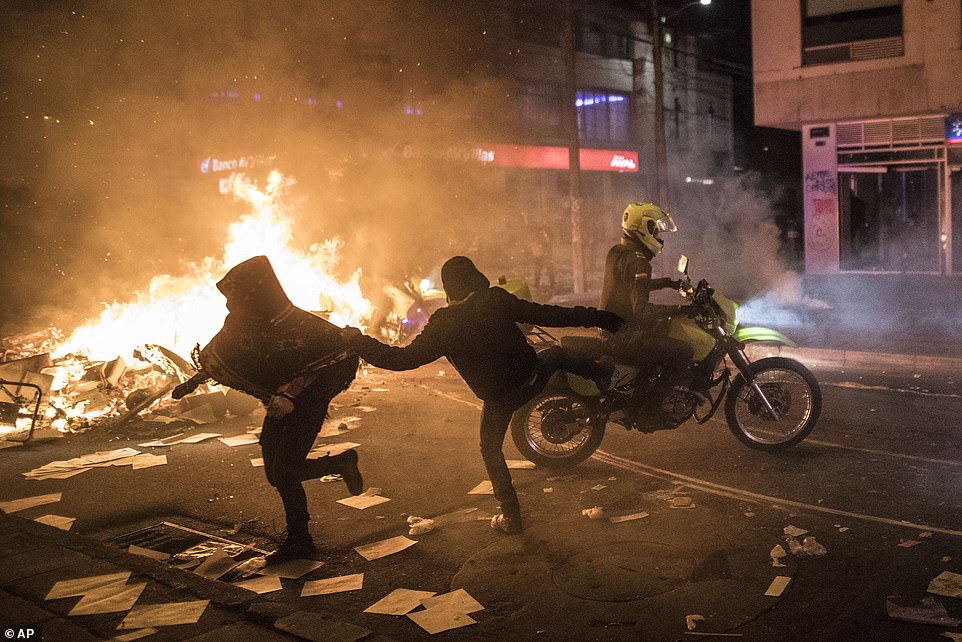 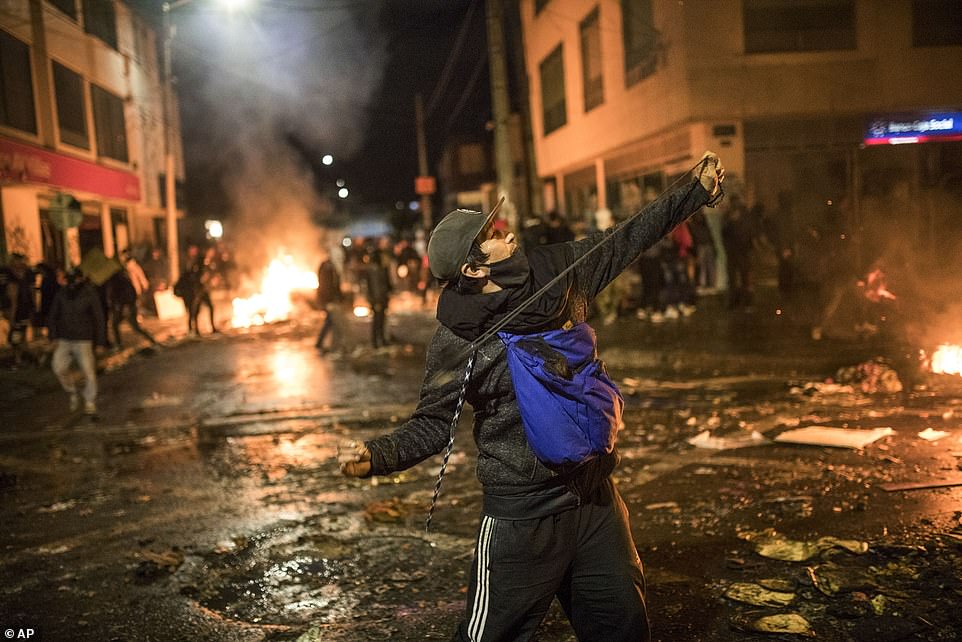 Two police stations were set on fire and three others attacked in different areas of Bogotá, the national police said, along with violent protests in other cities including Medellín, Ibague and Pereira.

‘We’ll offer Javier’s family legal assistance so there is a conviction not only of those directly responsible, but also to see structural reform that prevents and punishes police brutality,’ López, the mayor, said on Twitter.

‘There can be no tolerance for abuse of uniform or of authority,’ President Ivan Duque said during an event, adding that ‘objective’ penalties should be applied.

Police involvement in civilian deaths in Colombia is infrequent but not unheard of.

Teenager Dilan Cruz died last November during mass protests after being hit by a police projectile and members of the trans community regularly accuse police of violence.