EXPRESS INFORMER > Science & Technology > At least 15,000 people in Europe have died because of hot weather in 2022

The deadly toll of Europe’s heatwaves: At least 15,000 people have died across the continent because of hot weather in 2022 so far – including more than 3,200 in the UK

Heatwaves across Europe have killed at least 15,000 people so far this year, the World Health Organization (WHO) has said, including more than 3,200 in the UK.

Spain and Germany have been the worst-affected countries, with nearly 4,000 and and around 4,500 deaths due to hot weather in each nation respectively.

The three months from June-August were the hottest in Europe since records began.

It was sot hot the exceptionally high temperatures led to the worst drought the continent has witnessed since the Middle Ages.

‘Based on country data submitted so far, it is estimated that at least 15,000 people died specifically due to the heat in 2022,’ said Hans Kluge, the WHO’s regional director for Europe.

Heatwaves across Europe have killed at least 15,000 people so far this year, the World Health Organization (WHO) has said, including more than 3,200 in the UK. Pictured: the dried bed of the drought-affected Doubs River is seen in Arcon 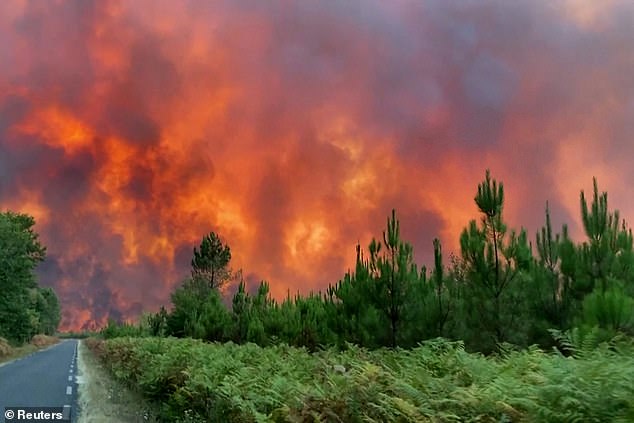 Spain and Germany have been the worst-affected countries, with nearly 4,000 and and around 4,500 deaths in each nation respectively. Flames are pictured ripping through tinder-dry woodland in Gironde, in the south of France

WHERE HAVE THE MOST DEATHS OCCURRED?

‘Nearly 4,000 deaths in Spain, more than 1,000 in Portugal, more than 3,200 in the United Kingdom, and around 4,500 deaths in Germany were reported by health authorities during the 3 months of summer.’

‘This estimate is expected to increase as more countries report on excess deaths due to heat.’

Successive heatwaves between June and July, which saw temperatures top 40 degrees Celsius (104 degrees Fahrenheit) in Britain as the country experienced its hottest day in history, saw some 24,000 excess deaths in Europe.

‘Heat stress, when the body cannot cool itself, is the leading cause of weather-related death in the European Region,’ the WHO said.

It added that extreme temperatures can be a danger to people who suffer from chronic heart disease, breathing problems and diabetes.

WHO said increasing heatwaves and other extreme weather will ‘lead to more diseases and deaths’ in the next decades unless ‘drastic’ action is taken.

Last month it was confirmed that the summer of 2022 was the hottest in Europe’s recorded history.

A series of extreme heatwaves and a long-running drought led to June, July and August breaking the previous high mark for temperature by 0.7° Fahrenheit (0.4° Celsius).

The Copernicus Climate Change Service (C3S) said temperatures on the continent had been the ‘highest on record for both the month of August and the summer (June-August) as a whole’.

Britain experienced its hottest day in history this summer. The Wessex Water Sutton Bingham Reservoir near Yeovil in Somerset is pictured during a scorching summer day

Data showed August was the hottest yet recorded in Europe by a ‘substantial margin’, beating the previous record set in August 2018 by 1.4° Fahrenheit (0.8° Celsius).

Globally, experts said August was the third warmest yet recorded.

In Britain, the highest temperature in history was recorded on July 19 as the mercury hit 104.5°F (40.3°C) in Coningsby, Lincolnshire.

The European summer this year is thought to be the driest since a mega-drought that hit the continent in 1540.