A new study suggests that about 10 percent of Twitter’s active accounts are posting ‘spam content’, as disputes over the issue threaten to derail Elon Musk’s $44 billion takeover of the social media company.

London-based data analytics firm GlobalData said in a report on Wednesday that its mathematical model found that spam accounts are roughly double the 5 percent share claimed by Twitter.

Musk has been threatening to walk away from his agreement to buy the company unless Twitter backs up its estimate that false or spam accounts comprise less than 5 percent of its user base.

‘The precise proportion of spam accounts is difficult to compute, as it is almost impossible to confirm the identity of the entity behind a tweet handle,’ said GlobalData senior data scientist Sidharth Kumar.

A new study suggests that about 10 percent of Twitter’s active accounts are posting ‘spam content’, as disputes over the issue threaten to derail Elon Musk’s $44 billion takeover 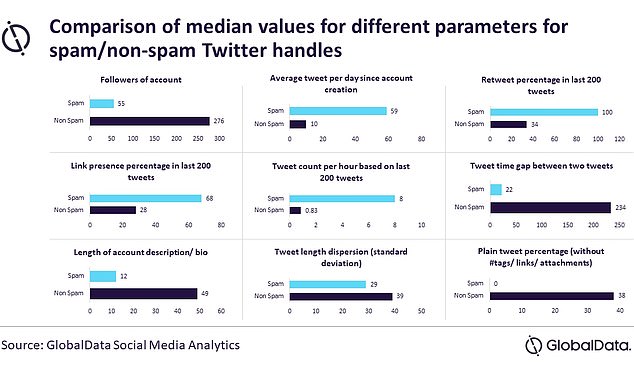 ‘Additionally, the definition of spam account may differ for everyone. Incessant tweeting of non-original content can be considered spam, but some may choose to see it as a very active user sharing articles/opinions,’ Kumar added.

GlobalData’s analysis relied on a statistical model that took into account a number of variables to determine the proportion of spam accounts.

The variables included frequency of tweets, deviation in tweet length, and proportion of tweets including hashtags or links, among others.

‘Our estimate is conservative, as we wanted to be sure that we were correctly identifying accounts as spam,’ said Kumar.

‘It is important to note that this is still an estimation. There is no conclusive way of knowing if a certain account is a bot or spam.’

Musk has speculated publicly that the proportion of bot and spam accounts on Twitter may be as high as 50 percent, and has been threatening to walk away from the deal unless the company can back up its 5 percent claim.

Those threats culminated in a letter from Musk’s lawyers to Twitter on Monday warning he may walk away unless more information is forthcoming.

On Tuesday, people familiar with the matter told Reuters that Musk’s discussions with private equity backers who are key to financing the deal have been put on hold because of the uncertainty.

Musk is on the hook to pay $33.5 billion in cash to fund the deal after arranging debt financing to cover the rest.

His liquidity is limited given that his wealth, which is pegged by Forbes at $218 billion, is largely tied to the shares of Tesla Inc, the electric car maker he leads.

Musk has been in discussions to arrange $2 billion to $3 billion in preferred equity financing from a group of private equity firms led by Apollo Global Management Inc that would further reduce his cash contribution, according to the sources.

These conversations are now on hold until there is clarity about the future of the acquisition, one of the sources said.

The pause in financing activities offers the first clear sign that Musk’s threats are interfering with steps that would help complete the deal.

Twitter has insisted thus far that Musk has been performing his obligation under their contract, including helping to secure regulatory approval for the deal.

Musk sold $8.5 billion worth of Tesla shares in April after he signed his deal to buy Twitter, and it is not clear how much cash he has available to meet his obligation.

He has raised $7.1 billion from a group of equity co-investors to reduce his contribution.

Musk also sought to reduce this exposure further by arranging a risky $12.5 billion margin loan tied to the shares of Tesla, but then scrapped it last month.

Preferred equity would pay a fixed dividend from Twitter, in the same way that a bond or a loan pays regular interest but would appreciate in line with the equity value of the company.

The deal uncertainty has also weighed on the plans of banks to get $13 billion of debt they have committed to the acquisition off their books through syndication.

While still preparing to syndicate the debt, the banks plan to wait until there is clarity on the deal to launch the process, the sources said.

The banks do not believe credit investors will buy into the debt as long as the uncertainty lingers, the sources said.

The banks have also found Musk’s disparaging public comments about the company unhelpful, and were hoping he would be helping them by now with investor presentations to syndicate the deal, the sources added.

To be sure, the halt of these activities does not affect the commitments made by Musk and the banks to fund the deal. Twitter can take them to court to force them to comply with their financing obligations under the deal contract if they come short. 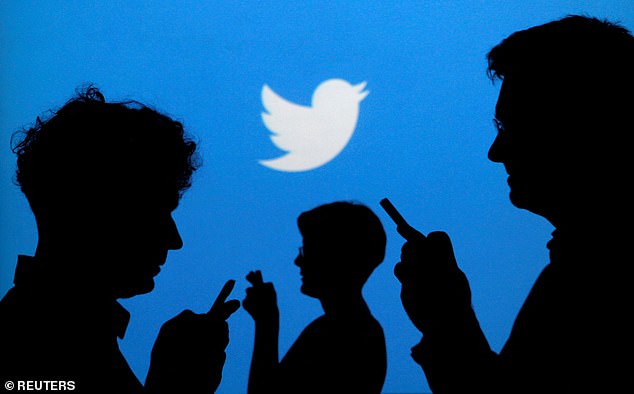 On Tuesday, people familiar with the matter told Reuters that Musk’s discussions with private equity backers who are key to financing the Twitter deal have been put on hold

The syndication of the debt could emerge as a major issue for the banks were Musk’s dispute with Twitter to escalate in litigation and they were forced by a judge to fund the deal.

In that scenario, they could struggle to get investors to buy the debt if Musk were unwilling to own the company.

That possibility, however, is seen as remote.

Most investors are trading Twitter’s stock on the assumption it is far more likely for the company to reach a settlement with Musk or let him walk away, rather than go through protracted litigation.

Texas Attorney General Ken Paxton also revealed on Monday that he was launching an investigation into Twitter for ‘potentially misleading Texans on the number of its ‘bot’ users.’

Paxton argued he has a duty to protect Texans from the company if it is indeed misrepresenting bot data in an effort to drive up revenue.