At least 10 Americans have been released from a Peruvian riverboat after they were taken hostage in ‘grim’ conditions by a machete-wielding indigenous group protesting an oil spill.

More than 200 people – including children and pregnant women – were trapped on Thursday after a group of indigenous protesters held them hostage.

All the captives were released on Friday and none were harmed. They departed on a boat called the Eduardo 11 and are heading toward Iquitos, according to Aljazeera.

The chief of the indigenous people, Watson Trujillo, also said they would continue to block the river until the government helps clear up the pollution.

He has asked President Pedro Castillo to declare an emergency over the oil spills, according to Aljazeera.

A representative at the US Embassy in Lima said they are ‘aware of reports that all passengers have been rescued.’

At least 10 Americans have been released from a Peruvian riverboat after they were taken hostage in ‘grim’ conditions by a machete-wielding indigenous group protesting an oil spill (pictured: hostages on the boat) 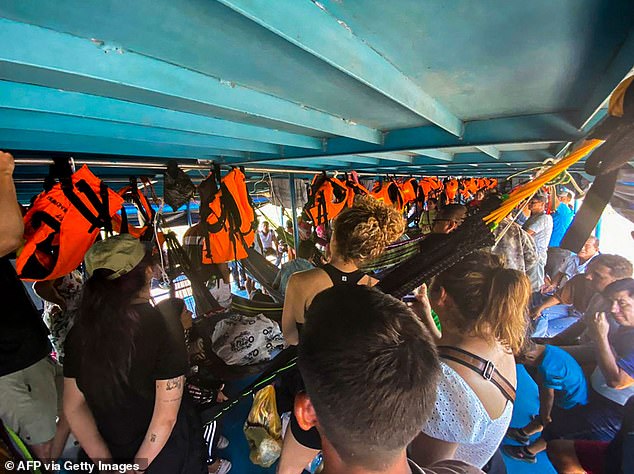 More than 200 people – including children and pregnant women – were trapped on Thursday and released around 2.30pm on Friday 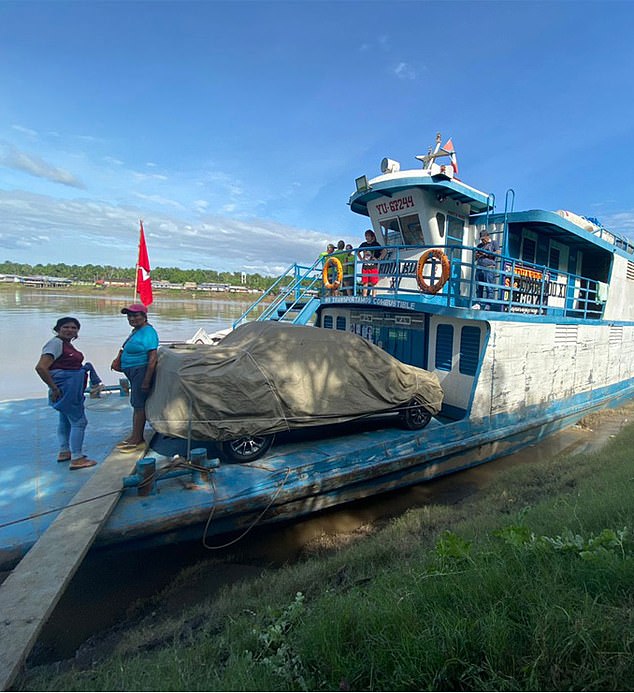 The chief of the indigenous people, Watson Trujillo, also said they would continue to block the river until the government helps clear up the pollution

Hostages came from various countries, including the US, UK, France, Switzerland, and more.

After being released on Friday at 2.30pm local time, retired Briton Charlotte Wiltshire, 54, has since spoken out about the ‘grim’ conditions they faced.

Speaking to The Mirror, Wiltshire, from Cardigan, Wales, said: ‘We were coming into this village and we were suddenly surrounded by several boats with men with sharpened stakes and machetes. There was a lot of yelling.

‘They somehow boarded the boat, they took the batteries from the boat. More and more people were arriving on the banks with machetes.’

She recalled hearing them shout in Spanish but said she could not understand. However, a local on the boat translated that they were making a speech about pollution, lack of infrastructure and the government.

Wiltshire said that the detained tourists – from the UK, Spain, France, the US and Switzerland – ranged in age from a young baby to a 70-year-old.

She had been traveling across South America for around four months with her partner Ken Wiltshire, 52, and her son Luke Bunker, 28. She wanted to experience traveling like a local and recalled how they took sleeper boats with hammocks through the country. 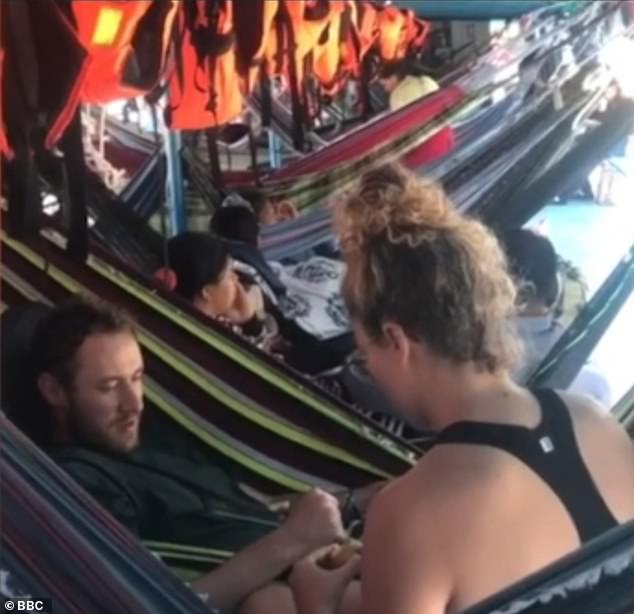 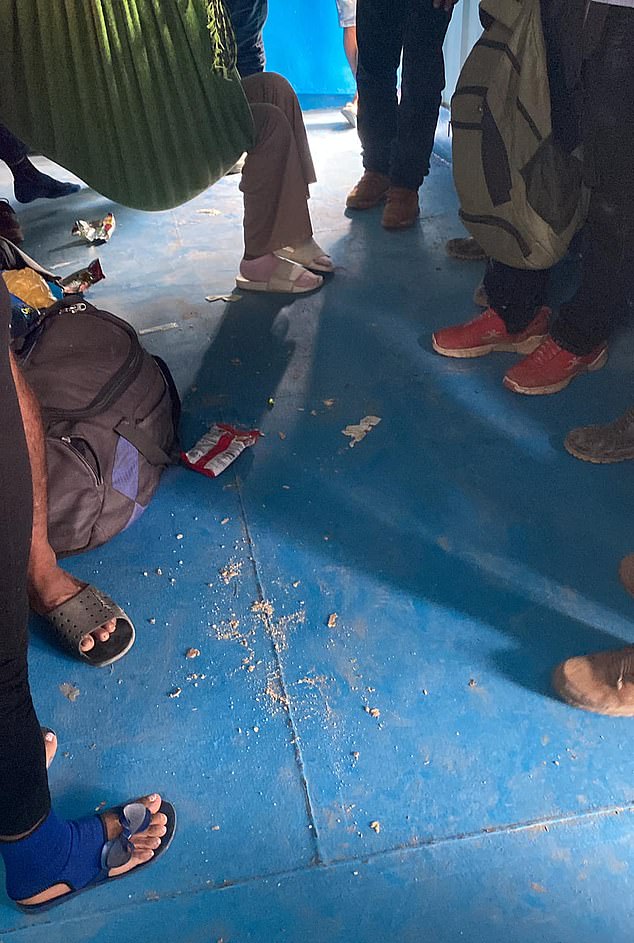 The family had traveled from Manorca inland to Yurimaguas with the hope of then taking a series of boats to Belem in Brazil.

They had met up with their tour guide at a hostel in Taracota who led them to the start of the Amazon boat journey – which they boarded on Wednesday lunchtime.

Despite the boat setting off that evening, less than 24 hours later, the family – along with the other tourists – were held hostage at 10am on Thursday.

Recalling the conditions, Wiltshire added: ‘When you have got 120 people squashed into a very small amount of space you’re getting tense because everybody’s just getting fed up with the situation.’

She said that they were handed 40 liters of water on Friday morning, but it did not last long because it was shared between 120 hostages. 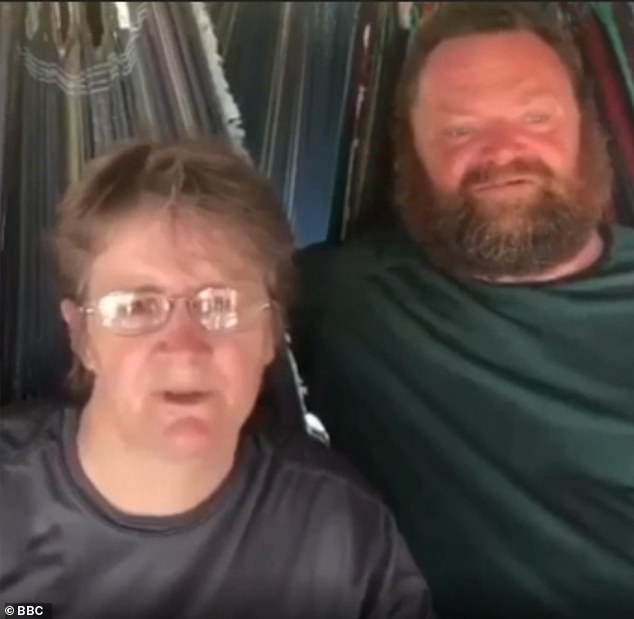 Briton Charlotte Wiltshire, 54, and her husband Ken Wiltshire, 52, spoke out after being captured 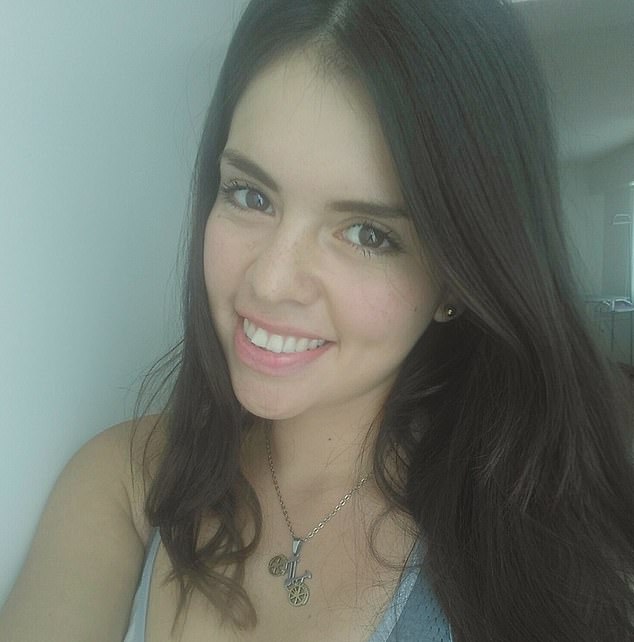 But after a day spent trapped without water or electricity, Trujillo announced the end of the hostage situation.

Angela Ramirez, another detainee, previously said: ‘We spent the night here. We already have hardly no water to drink, the sun is shining very strong, there are babies crying, the youngest is only one month old, pregnant women, disabled people, and the elderly are on board.

‘Now we do not have electricity to charge our phones, nor water to wash ourselves. Help me share please.’

Angela had been on a cycling trip through the Peruvian jungle for eight days when they tried to travel through the Cuninico River by boat and were detained.

In a previous post, she said: ‘Help me publish, we are in Cuninico an indigenous community of the jungle, we are hostages of the community, as there were 46 oil spills, from which two children and one woman died. 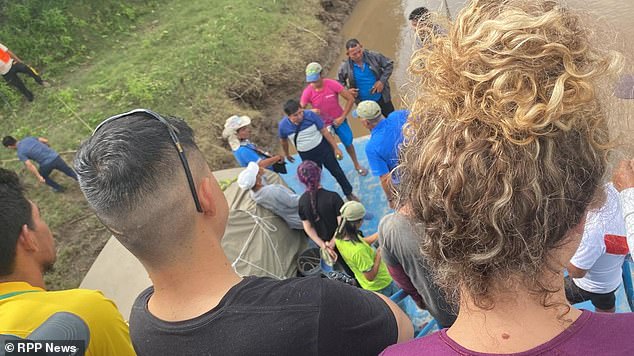 The tourists were part of a group of 70 travelers who were also from France, Spain, the US and Switzerland when they were held up on their river boat

‘They are KIND AND RESPECTFUL to us, but it is the only way they have found to look for solutions for their community.

The protesters reportedly told the hostages that they were taking them captive to get the government’s attention to focus on the leaky Norperuano Pipeline that has spilled oil more than 30 times between 1996 and 2006.

The leaks have contaminated their rivers, streams, and food production.

It leaked twice in September on the 5th and 16th, affecting the Nacion Chapra territory and the Cuninico community.

‘We have seen ourselves obliged to take this measure to summon the attention of a state that has not paid attention to us for eight years,’ Trujillo said, according to Aljazeera.

‘The people have had to drink water and eat fish contaminated with petroleum without any government being concerned.’

Blood samples from the region done in 2016 showed citizens had high levels of mercury and cadmium.

‘The children have those poisons in their blood. The people suffer from stomach problems – that is every day,’ the chief said.

Peru’s Minister of Mines and Energy Alessandra Herrera Jara said an emergency was declared on September 24.

On September 16, a state-run Petroperu pipeline ruptured, leaking oil into the Cuninico ravine which contaminated the river downstream.

Chief Galo Vásquez said: ‘El Cuninico is at the mouth of the ravine that flows into the waters of the Marañón River.

‘All the communities that are downstream, called San Francisco, San Antonio, Esperanza, San Pedro and so on up to Nauta were affected.’

The crisis led to a lack of water in the community and fishing became impossible in the remote region.

Petroperu mobilised an emergency response team on the day of the spill and later reported the pipeline was intentionally cut.

But since then, locals say state officials have failed to provide adequate help for their ravaged communities.

The indigenous people use the river for drinking water, fishing and cleaning.

A week after the spill, the community received food and water supplies, which they said only lasted two days.

A previous spill in 2014 already damaged relations between the locals and the state.

They say the 50-year-old pipes are no longer fit for purpose and fear future spills are inevitable.

The community also believes they have been suffering from oil contamination from previous spills, and the government is not adequately checking water safety.