A black hole has been spotted ejecting material three years after consuming a star, in what astronomers are comparing to a cosmic burp.

Ordinarily, this sort of phenomenon would be witnessed during the event, and the Harvard University researchers are still unsure why the delay has occurred.

They monitored the black hole for several months after it had devoured the small star in 2018, but by chance decided to revisit it in 2021.

That was when they detected radio waves that were violently spewing out of it, as if it was ‘burping out a bunch of material from the star it ate years ago’.

‘This caught us completely by surprise,’ said Yvette Cendes, a research associate at the Center for Astrophysics and lead author on the study of this event.

‘No one has ever seen anything like this before.’

Artist’s illustration of tidal disruption event AT2019dsg where a supermassive black hole spaghettifies and gobbles down a star. Some of the material is not consumed by the black hole and is flung back out into space

When a star gets too close to a black hole, it undergoes ‘spaghettification’ – where it is stretched vertically and compressed horizontally by the strong gravitational field.

These are known as a tidal disruption events, or TDE, and are well-known for emitting light when they occur.

This is because, eventually, the elongated material spirals around the black hole and heats up, creating a flash that astronomers can detect millions of light years away.

What’s more, some of the material that the black hole cannot successfully consume occasionally gets flung back into space.

This is called an ‘outflow’ and normally develops quickly after a TDE occurs – not years later. 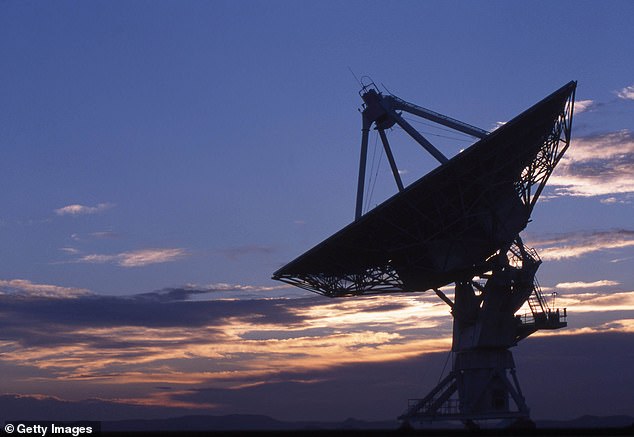 In June 2021, the USA-based team decided to revisit some TDEs that had occurred in the last several years, including AT2018hyz. Radio data from the Very Large Array (pictured) in New Mexico showed that the black hole had mysteriously reanimated.

WHAT IS A ‘TIDAL DISRUPTION EVENT’?

When a star gets too close to a black hole, it undergoes ‘spaghettification’ – where it is stretched vertically and compressed horizontally by the strong gravitational field.

These are known as a tidal disruption events, or TDEs, and emit light, radio and other waves for up to a few weeks or months while they occur.

This is because, eventually, the elongated material spirals around the black hole and heats up, creating a flash that astronomers can detect millions of light years away.

Astronomers observed a TDE occurring 665 million light years away from Earth in October 2018, which was named AT2018hyz.

However, co-author Sebastian Gomez referred to it as ‘unremarkable’ as the star was only one tenth the mass of our sun.

He said: ‘We monitored AT2018hyz in visible light for several months until it faded away, and then set it out of our minds.’

In June 2021, the USA-based team decided to revisit some TDEs that had occurred in the last several years, including AT2018hyz.

Radio data from the Very Large Array in New Mexico showed that the black hole had mysteriously reanimated.

Edo Berger, co-author and professor of astronomy, added: ‘We have been studying TDEs with radio telescopes for more than a decade, and we sometimes find they shine in radio waves as they spew out material while the star is first being consumed by the black hole.

‘But in AT2018hyz there was radio silence for the first three years, and now it’s dramatically lit up to become one of the most radio luminous TDEs ever observed.’

They then got to work taking observations of the TDE in multiple wavelengths of light, using telescopes in Chile, South Africa, Australia and space.

The scientists say the black hole had not swallowed anything new in the three years since the original star, but the cause of the outflow’s delay is still unknown.

In a paper, published in the Astrophysical Journal, they reveal that the material is travelling as fast as 50 percent the speed of light.

For comparison, most TDEs have an outflow that travels at 10 percent the speed of light, Cendes says.

They hope their results will increase understanding of black holes’ feeding behaviour, which Cendes likens to ‘burping’ after a meal.

‘This is the first time that we have witnessed such a long delay between the feeding and the outflow,’ Berger says.

‘The next step is to explore whether this actually happens more regularly and we have simply not been looking at TDEs late enough in their evolution.’

WHAT’S INSIDE A BLACK HOLE?

Black holes are strange objects in the universe that get their name from the fact that nothing can escape their gravity, not even light.

If you venture too close and cross the so-called event horizon, the point from which no light can escape, you will also be trapped or destroyed.

For small black holes, you would never survive such a close approach anyway.

The tidal forces close to the event horizon are enough to stretch any matter until it’s just a string of atoms, in a process physicists call ‘spaghettification’.

But for large black holes, like the supermassive objects at the cores of galaxies like the Milky Way, which weigh tens of millions if not billions of times the mass of a star, crossing the event horizon would be uneventful.

Because it should be possible to survive the transition from our world to the black hole world, physicists and mathematicians have long wondered what that world would look like.

They have turned to Einstein’s equations of general relativity to predict the world inside a black hole.

These equations work well until an observer reaches the centre or singularity, where, in theoretical calculations, the curvature of space-time becomes infinite.