Astronomers have discovered a new kind of stellar explosion that would be powerful enough to destroy the equivalent of 3.5 billion Great Pyramids of Giza.

The so-called ‘micronova’ is a blast that lasts for just a few hours, which makes it very difficult to observe, but it could be commonplace in the universe.

These explosions take place on the surface of certain stars and can quickly burn through huge amounts of material, scientists claim.

Experts believe the discovery may change our understanding of how eruptions in stars occur.

Astronomers have observed a new kind of stellar explosion (pictured in an artist’s impression) that would be powerful enough to destroy the equivalent of 3.5 billion Great Pyramids of Giza

HOW DO STARS FORM?

Stars form from dense molecular clouds – of dust and gas – in regions of interstellar space known as stellar nurseries.

A single molecular cloud, which primarily contains hydrogen atoms, can be thousands of times the mass of the sun.

They undergo turbulent motion with the gas and dust moving over time, disturbing the atoms and molecules causing some regions to have more matter than other parts.

If enough gas and dust come together in one area then it begins to collapse under the weight of its own gravity.

As it begins to collapse it slowly gets hotter and expands outwards, taking in more of the surrounding gas and dust.

At this point, when the region is about 900 billion miles across, it becomes a pre-stellar core and the starting process of becoming a star.

Then, over the next 50,000 years this will contract 92 billion miles across to become the inner core of a star.

The excess material is ejected out towards the poles of the star and a disc of gas and dust is formed around the star, forming a proto-star.

This matter is then either incorporated into the star or expelled out into a wider disc that will lead to the formation of planets, moons, comets and asteroids.

An international team of researchers, led by Durham University, observed the phenomenon in three white dwarfs – the remnants of dead stars – as they fed in each case on a companion star.

While micronovae are extremely powerful, they are small on astronomical scales compared to novae and supernovae, which are extremely bright and have been known about for centuries.

Throughout history there are numerous accounts of new stars being seen by astronomers which we now call novae.

Lead author Dr Simone Scaringi, in the Centre for Extragalactic Astronomy, Durham University, said: ‘We have discovered and identified for the first time what we are calling a micronova.

‘The phenomenon challenges our understanding of how thermonuclear explosions in stars occur.

‘We thought we knew this, but this discovery proposes a totally new way to achieve them.

‘It just goes to show how dynamic the universe is.

‘These events may actually be quite common, but because they are so fast they are difficult to catch in action.’

The researchers first came across the unusual micronovae when they noticed a bright flash of light lasting for a short time while analysing data from Nasa’s Transiting Exoplanet Survey Satellite (TESS).

They have since observed three micronovae using the satellite, which is normally used to look for planets outside of our solar system.

Two micronovae were from already known white dwarfs, but the third needed more observations with the X-Shooter instrument on the European Southern Observatory’s (ESO) Very Large Telescope (VLT) for its white dwarf status to be confirmed.

In novae, a thermonuclear explosion occurs over the entire surface of the star and the intensely bright light from this blast can be seen for weeks.

Micronovae are similar explosions that are smaller in scale and faster, lasting several hours.

The researchers say that they occur on some white dwarfs with strong magnetic fields, which funnel material towards the star’s magnetic poles. 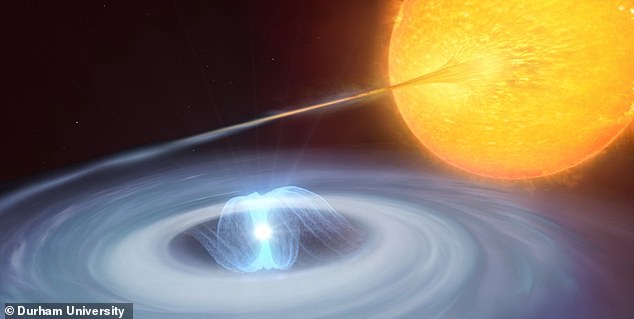 They said the micronova – as it has been named – is a blast that lasts for just a few hours, which makes it very difficult to observe 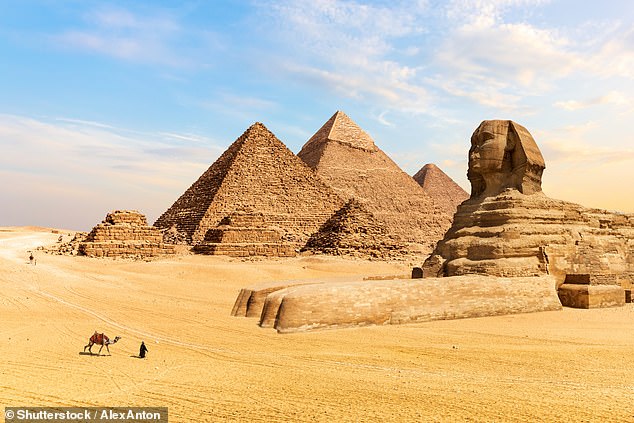 These explosions take place on the surface of certain stars and can quickly burn through huge amounts of material — equivalent to 3.5 billion Great Pyramids of Giza (pictured)

Study co-author Professor Paul Groot, of Radboud University, the Netherlands, said: ‘For the first time, we have now seen that hydrogen fusion can also happen in a localised way.

‘This leads to micro-fusion-bombs going off, which have the strength of about one millionth of a nova explosion, hence the name “micronova”.’

The researchers hope to capture more of these elusive events, which will require large-scale surveys and quick follow-up measurements.

Dr Scaringi added: ‘Rapid response from telescopes such as the VLT or ESO’s New Technology Telescope and the suite of available instruments will allow us to truly unravel what these mysterious micronovae are.’

The research has been published in the journal Nature.