Pharma giant Astrazeneca was a top riser on the FTSE 100 yesterday after a strong week that saw it reporting positive clinical data for two cancer drugs.

Data released yesterday from a clinical trial for its lynparza tablets showed a ‘statistically significant and clinically meaningful improvement’ in the survival of men suffering from prostate cancer, it said.

Prostate cancer is the most common cancer in men, with around one in eight in the UK diagnosed with it during their lifetime. It claims over 11,500 lives a year.

Taking the lead: Since taking over in 2012 chief executive Pascal Soriot (pictured) has focused on launching blockbuster oncology drugs, boosting the share price

‘These exciting results demonstrate the potential for lynparza… to become a new first-line option for patients… and reach a broad population of patients living with this aggressive disease. We look forward to discussing the results with global health authorities as soon as possible.’

Lynparza is already approved in multiple countries including the US and Japan to treat breast, ovarian and pancreatic cancers.

The clinical trial success could be highly lucrative, according to analysts at Jefferies, who said that the 30,000 to 50,000 patients suffering from the cancer in the US alone presented a ‘significant commercial opportunity’ of £2.2billion to £3.7billion in sales.

Globally, the drug could be worth up to £7.3billion, they said.

Analysts at Shore Capital said: ‘This ‘pipeline in a pill’ model has been implemented successfully for numerous oncology assets in Astrazeneca’s portfolio and we see the potential for other assets in development to achieve equally impressive results.’

Since taking over in 2012 chief executive Pascal Soriot has focused on launching blockbuster oncology drugs, boosting the share price, which rose 2 per cent, or 177p, to 8845p yesterday. It is the second win in a week for Soriot and the drugs giant. 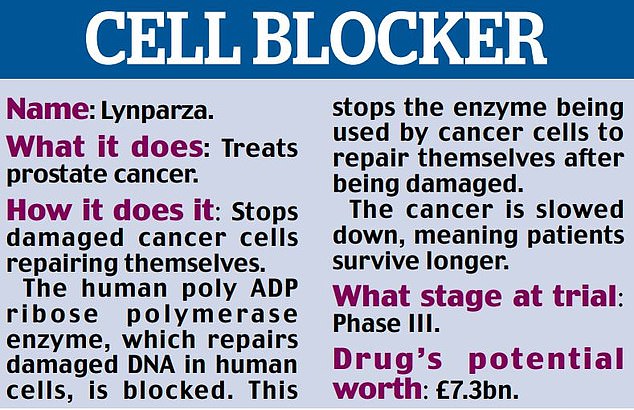 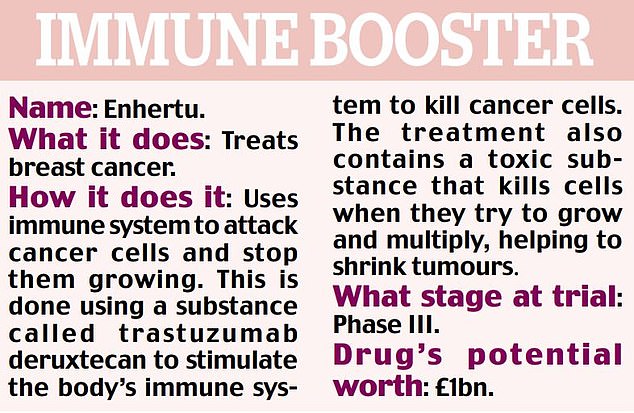 On Monday, results from a phase III trial showed its cancer drug enhertu reduced the risk of disease progression and death by 72 per cent in patients with metastatic breast cancer (MBC), also known as stage IV breast cancer, when the disease spreads to another part of the body.

It means that the drug is better at keeping patients alive without their tumours worsening than a drug developed by Roche, Astra’s Swiss rival.

MBC has a low survival rate, averaging at around three years.