It’s not often that you get the chance to own a genuine Bond car, but that will be the case next month when an Aston Martin DB5 stunt vehicle used in the latest film No Time to Die goes under the hammer.

Christie’s, which will offer the collectible motor to the highest bidder at its 007-dedicated auction on 28 September has placed an estimate of £1.5million to £2million on the motor that’s synonymous with the British secret service agent.

However, the car isn’t quite as it appears. And the description notes suggest this is more of a prop than a vehicle to be enjoyed on the road, with the small print saying it’s not road registered, can’t be driven on public streets and will be sold with no promises that the vehicle is ‘of satisfactory quality’.

Not what it seems: This is one of the Aston Martin stunt cars used in the latest James Bond No Time to Die film. However, it isn’t a genuine DB5 but a replica built specifically for filming purposes. It will be sold at auction next month

The DB5 is one of six cars used in the 2021 Bond film offered by the auction house among 60 lots linked to the movie franchise, all of which are being sold to raise money for 45 different charities.

While it might look like the genuine article on the face of things – granted with a lot of damage seemingly inflicted on the bodywork – this isn’t any normal classic Aston Martin.

It is one of eight cars built specifically for a James Bond movie – and this is the only one ever made available for public sale.

It has been reengineered from the ground up by Aston Martin’s Special Projects division for the latest film in the Bond franchise, which is also the last to feature Daniel Craig as 007.

Under the familiar bonnet is not the 4.0-litre straight-six cylinder unit you would normally find in a period DB5 but a modern-era 3.2-litre inline-six petrol engine mated to a manual gearbox.

The running gear is different too, with the addition of more powerful brakes and beefier suspension.

This was on request of EON Productions’ Special Effects Supervisor, Chris Corbould, to ensure the car would be capable of its incredible stunt performances while being thrashed through the cobbled streets of Matera, Italy, in the opening high-octane sequence in the latest flick. 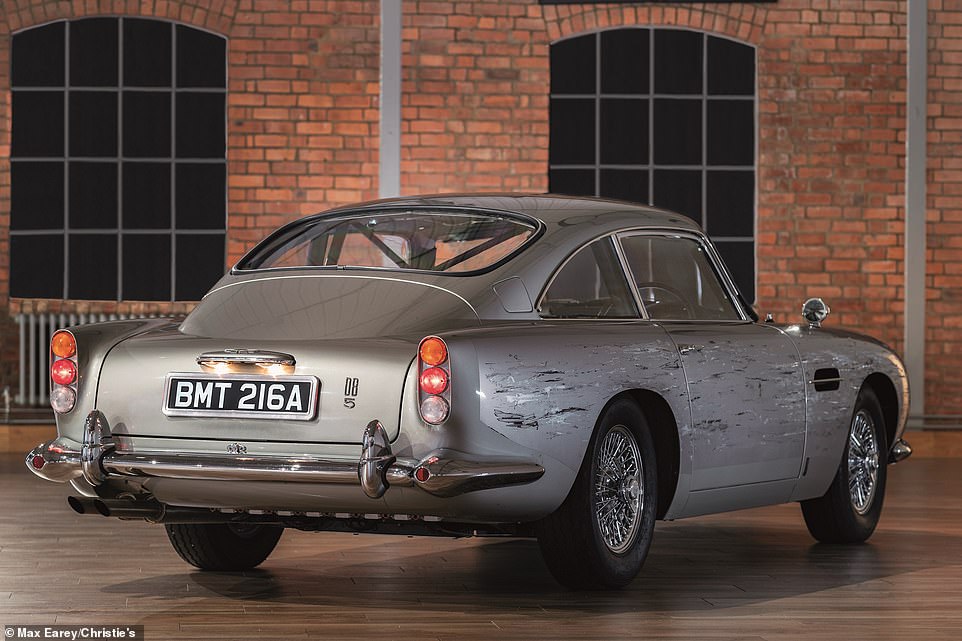 Christie’s has put an estimate of £1,500,000 to £2,000,000 on the Aston Martin DB5 replica, which goes under the hammer on 28 September along with a host of other Bond-related items being sold for charity

While it might look like it has the magnesium-alloy bodywork of the original, the panels are all carbon fibre to save weight – and of course sprayed in Silver Birch paint.

The interior has also been handcrafted by the special Aston Martin division, featuring cut-down sport Tillett stunt seats and a reimagined dashboard built using innovative 3D printing techniques – though the steering wheel and dials are all original DB5 parts for authenticity in interior shots.

This particular stunt car was used in the high-speed chase sequence before Bond – with Madeleine Swann, played by Léa Seydoux, in the passenger seat – is pincered by his pursuers in the Italian city’s square, leaving him no option but to unleash the vehicle’s hidden machine guns while performing donuts to take out the bad guys. 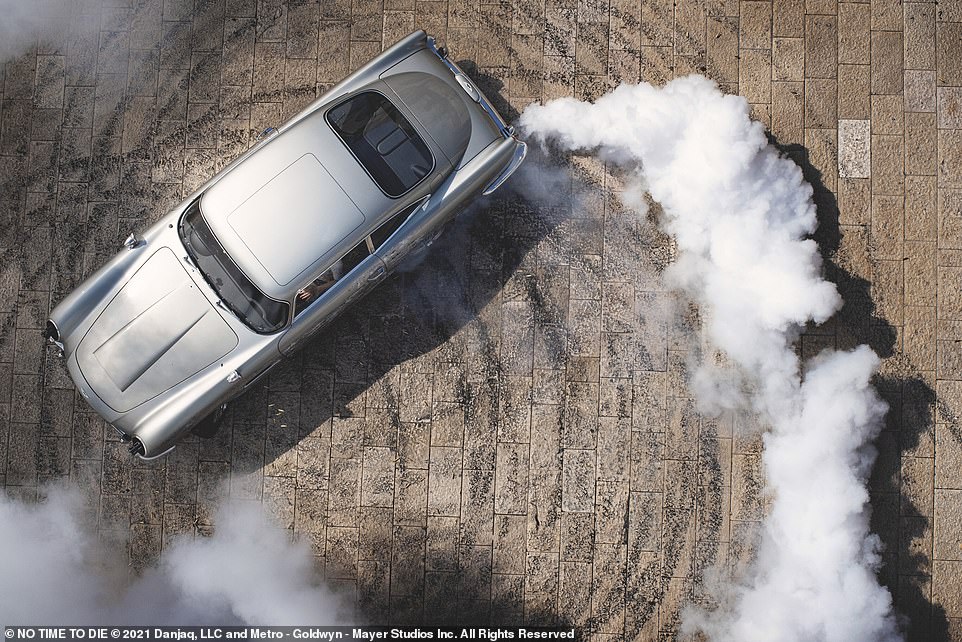 Under the familiar bonnet is not the 4.0-litre straight-six cylinder unit you would normally find in a period DB5 but a modern-era 3.2-litre inline-six petrol engine mated to a manual gearbox. It also has more powerful brakes and beefier suspension 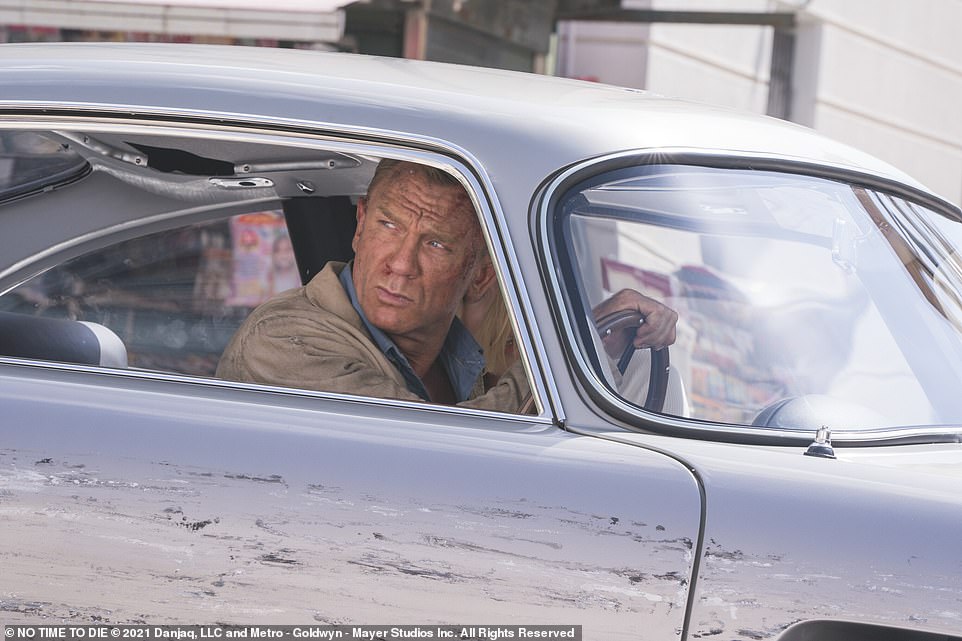 The stunt car has been produced by Aston Martin’s special projects divisions to the specification requested by EON Productions’ Special Effects Supervisor, Chris Corbould. This was to ensure the car would be capable of being driven by specially-trained drivers at high speed around the cobbled streets of Matera, Italy, in the 2021 film’s opening scenes

You can tell this by the mocked-up damage on the carbon panels – and the vehicle also includes some of the bespoke gadgets – including the machine guns behind the headlights – that feature in the movie scenes.

It makes the sale of the car a once-in-a-lifetime opportunity for fans of the 007 franchise, with the entire proceeds of the sale gifted to The Prince’s Trust in its work with young people and the Prince of Wales’s Charitable Fund’s support of charities assisting serving and former members of the three Intelligence Agencies and UK Special Forces.

However, before you start raiding your savings ready for the 28 September sale, there are a few catches.

The small print states that while it might be a completely functional car, you can’t actually use it on the road.

Christie’s is selling it as a ‘non-runner’ collector’s item and notes that it is not approved for use on any public roads.

This is because the car was built specifically to be used ‘by trained professional stunt drivers in a controlled environment for filming only and is not sold as a means of transport’, the lot small print explains.

It adds that the vehicle is not registered with the Driver Vehicle License Agency, so the winning bidder won’t be able to drive off into the sunset once the hammer falls. 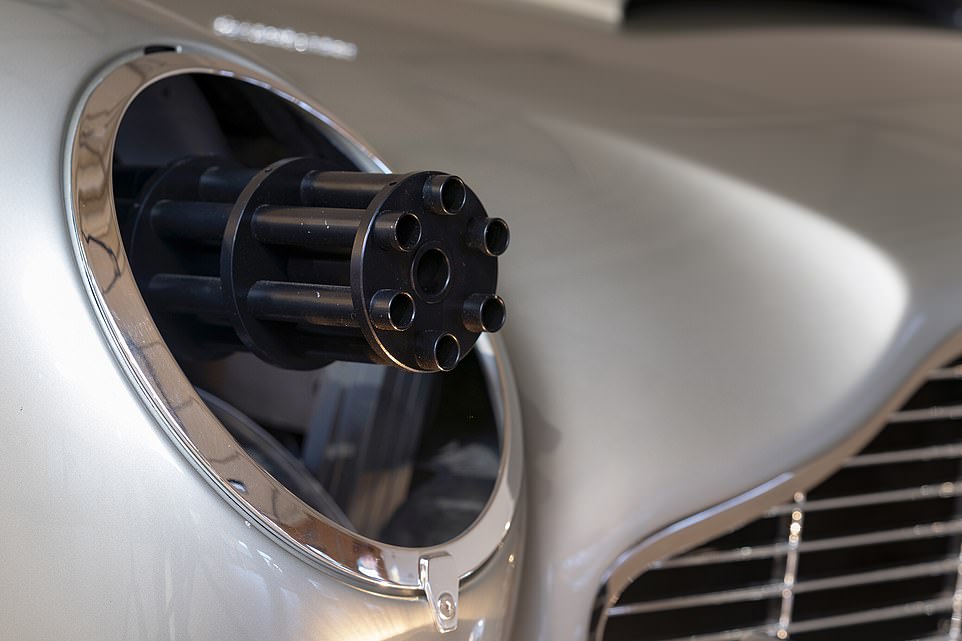 The stunt car has a number of Bond gadgets, though the vehicle can’t be driven on the road as it is not road registered or passed as safe for public streets. This means a winning bidder might be pay up to £2million for a collector’s item they can’t drive on public roads

The terms and conditions point out: ‘No promise is made that the vehicle is of satisfactory quality, fit for purpose, meets any road vehicle regulations, safety requirements or is otherwise roadworthy.’ It adds: ‘Servicing and repairs may require bespoke and custom-built parts.’

Christie’s also says in the lot description that the mileage shown on the odometer is not genuine and calibrated specifically for the filming and the car is sold without a warranty ‘of any kind’.

‘If the successful buyer wishes to use the vehicle as a means of transport, he/she is alone responsible for all tests, repairs, reports and any other required formalities that are necessary to convert this vehicle from a collector’s item to a roadworthy vehicle (if possible),’ the vehicle’s description notes.

The sale of 60 items also includes a jet boat from 1999 Bond film The World is Not Enough starring Pierce Brosnan as 007. The one up for grabs – with an estimate of £20,000 to £30,000 – is a non-runner used for special effects only, though it does feature the opening weapon hatch at the front.