An asteroid the size of the Eiffel Tower will race past the Earth next month, travelling  at 14,714 miles per hour, before being flung back into deep space.

It won’t be very close in terrestrial terms, coming 2.5 million miles from the planet – or about ten times farther than the moon – so will pose no threat to us.

However, the ‘vaguely egg-shaped’ 4660 Nereus is classed as a Potentially Hazardous Asteroid by NASA because it is 1,082ft long and crosses Earth’s orbit.

It will make its ‘close approach’ on December 11, before hurtling back out on its long orbit around the sun, returning in 2060 where it will be 750,000 miles away.

These relatively close approaches, and its significant size, have led to a number of failed proposals for robotic missions to explore the rock as it hurtles past the Earth.

The ‘vaguely egg-shaped’ 4660 Nereus space rock is classed as a Potentially Hazardous Asteroid by NASA because it is 1,082ft long and crosses Earth’s orbit

Asteroid 4660 Nereus is a ‘potentially hazardous’ near Earth object that crosses the orbit of Earth and Mars.

The space rock was discovered in February 1982 by Eleanor F Helin, and observations since then have revealed its orbit, shape, size and surface features.

It orbits the sun every 1.82 Earth years, but comes in closer than the Earth.

A number of probe missions have suggested visiting the rock, but so far none have actually happened.

Neither are close enough to pose any threat to life on Earth, says NASA.

Nereus is an Apollo-class asteroid, with an orbit that puts it in a fairly regular close proximity to Earth, orbiting the sun half as often as the Earth does.

This puts it in the small group of larger space rocks ideal for exploration, with a mission reaching the space rock, gathering samples, and returning in four years.

A number of missions have already been planned, but so far none have happened.

This includes the private Near Earth Asteroid Prospector (NEAP) probe, which was a concept developed by private company SpaceDev to target a near-Earth asteroid and land scientific instruments and claim it as private property.

That proposed mission ran into funding issues and so it never went ahead.

Another was the first Japanese sample return mission Hayabusa, which had targeted Nereus, but a launch delay meant it had to be redirected to 25143 Itokawa.

NASA’s NEAR Shoemaker robotic spacecraft was also originally set to fly by the asteroid, but the target was changed to 253 Mathilde and 433 Eros.

Near Earth-object asteroids also make a good target for ground-based telescopes, which can get detailed observations as they come within a few million miles of Earth.

Nereus has been imaged by radar, as well as visual telescopes, allowing astronomers to discover its slightly elongated, egg-shape, and reveal a terrain map of its surface.

The space rock was discovered in February 1982 by Eleanor F Helin, and observations since then have revealed its orbit, shape, size and surface features.

It is a potentially hazardous asteroid due to the fact it crosses both the orbit of Earth and Mars, and is large enough that if it were to hit, it would cause mass destruction.

Tracking its orbit allowed astronomers to discover it will have made seven ‘close approaches’ to Earth between 1900 and 2100, that is anything under 3 million miles. 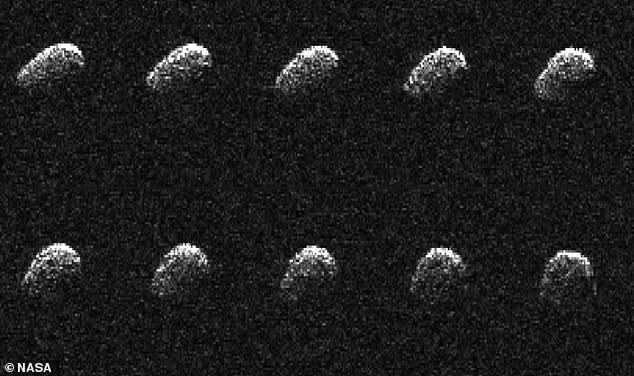 Nereus is an Apollo-class asteroid, with an orbit that puts it in a fairly regular close proximity to Earth, orbiting the sun half as often as the Earth does

Engineers estimate it would be easier to land a spacecraft on Nereus than the moon, as its ‘delta-v,’ an estimate of the total change in velocity required for a space mission, is under 5 km/s, whereas the moon is 6.3 km/s.

It has an elliptical orbital of 1.82 years, meaning it goes around the sun about half as often as the Earth does, but will come in closer to the sun than the Earth.

It is thought to be an E-type asteroid, common to the inner part of the asteroid belt and likely formed from the crust of a long destroyed larger planetary body.