The new husband of Nobel laureate Malala Yousafazi is a privately-educated cricket executive from Pakistan who once worked at Coca-Cola, MailOnline can reveal.

Malala spoke of her excitement for the ‘journey ahead’ after tying the knot with cricket fanatic Mr Malik at their small Islamic celebration.

She smiled next to her new husband, who wore a matching pink tie, in adorable outdoor snaps. Another image showed Malala touching her hair as Asser signed the marriage contract.

After stunning the world with their sweet pictures, social media has been abuzz with speculation about the newly weds’ relationship.

But MailOnline can reveal Mr Malik spent his formative years studying at a private school in Pakistan, worked for Coca Cola and later became involved in entrepreneurship in the cricket-mad nation.

This summer, Malala had alluded to the fact she had met someone in 2019 – now revealed to be Mr Malik – and questioned why people needed to get married in an interview with Vogue.

And Instagram pictures confirm the couple shared their first social media appearance together that same year, watching England play Pakistan at the Cricket World Cup in the UK. 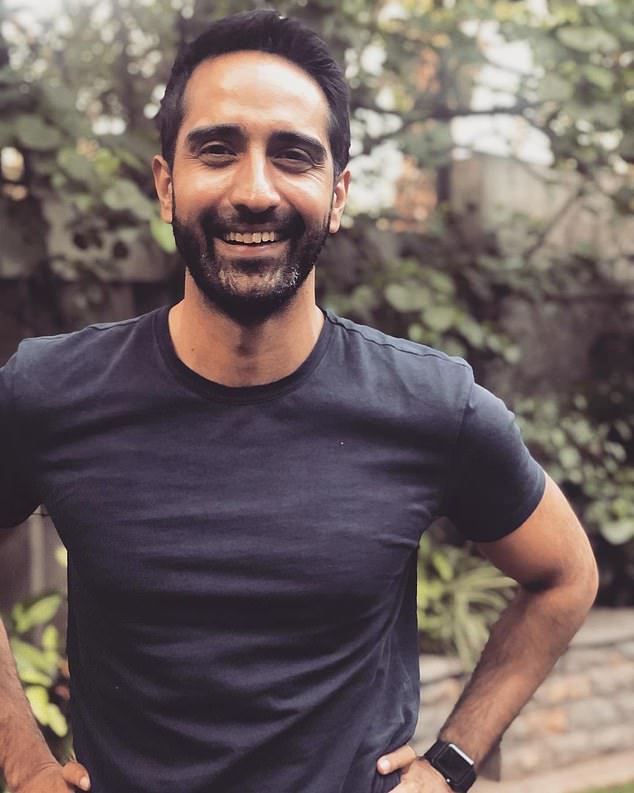 Mr Malik, who is understood to be in his early 30s, is a cricket executive with the Pakistan national team

Mr Malik is understood to be in his early thirties and was last year appointed high performance manager of the Pakistan Cricket Board (PCB).

He had previously worked as an operations manager for Pakistan Super League (PSL) franchise Multan Sultans.

Mr Malik also runs an amateur league franchise called Last Man Stands in Pakistan, which he has described as an attempt to ‘revive grassroots cricket in Pakistan in an organised and structured way’.

His Twitter account is filled with vocal support for the empowerment of women’s cricket, something that may have stood him in good stead with new wife Malala, who describes herself as a cricket fan and played for Oxford University’s team. As well as being a cricket lover, Malik is a known supporter of Newcastle United FC.

He started school at the £175-per-month Aitchison College in Lahore in 1998, and then graduated from the Lahore University of Management Sciences in 2012 with a degree in economics and political science.

After university, Malik worked for a host of companies in Pakistan, the biggest among them being Coca Cola, until he began working for the Multan Sultans in 2018.

In 2019, Malik moved on to player management and consultancy with MLK Management, where he served as managing director for just over a year.

It is unknown how long Malala and Mr Malik have been dating but he posted a picture of them together with friends in June 2019, watching England play Pakistan during the Cricket World Cup at Edgbaston in Birmingham.

It’s also unclear where they plan on building their lives together, with Malala’s family known to reside in Birmingham, and Azsser’s job requiring him to be in close contact with the Pakistan national cricket team.

In an interview with Vogue Magazine in June, Malala said she has only recently entertained thoughts of marriage after being lectured on the topic by her mother.

She said: ‘I still don’t understand why people have to get married. If you want to have a person in your life, why do you have to sign marriage papers, why can’t it just be a partnership?’

‘My mum is like: “Don’t you dare say anything like that! You have to get married, marriage is beautiful.”‘ 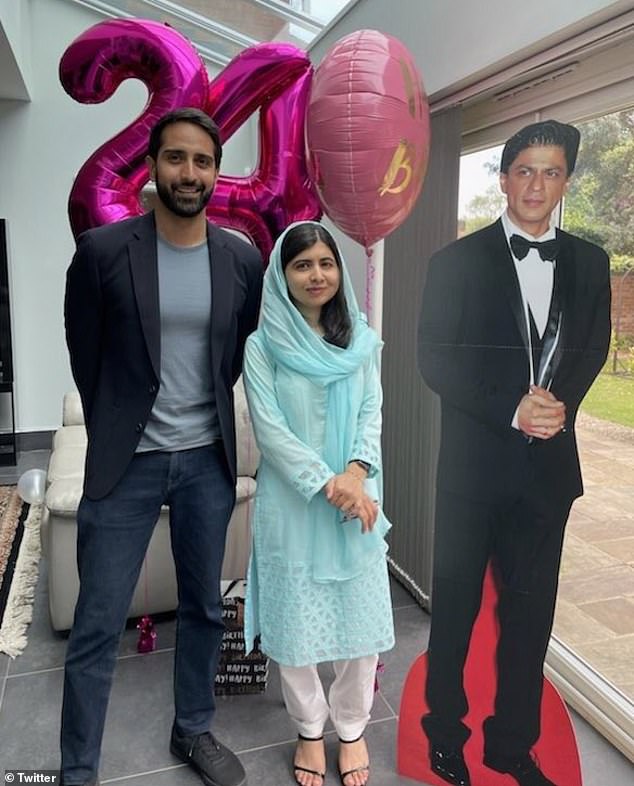 It is not known when Malala and Asser began their relationship, but her husband posted this photograph from her birthday in July 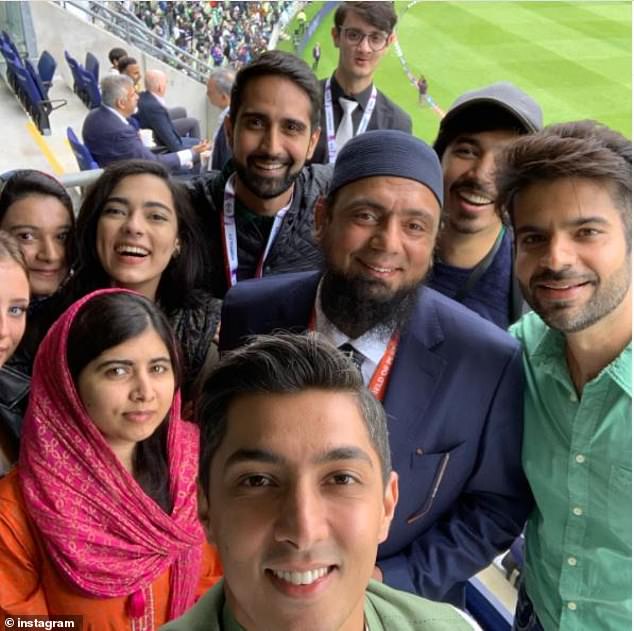 Malala and Asser Malik pictured with friends in June 2019, watching the England versus Pakistan cricket game at Edgbaston. 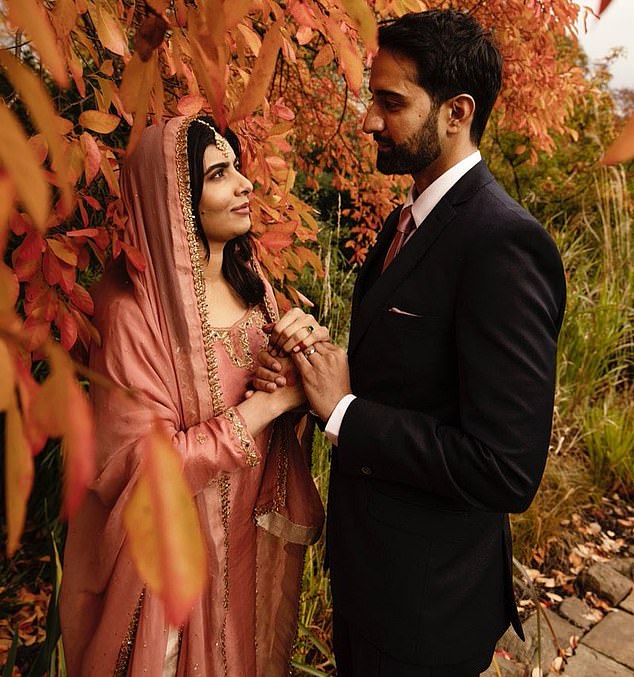 Malala wrote: ‘Today marks a precious day in my life. Asser and I tied the knot to be partners for life’ 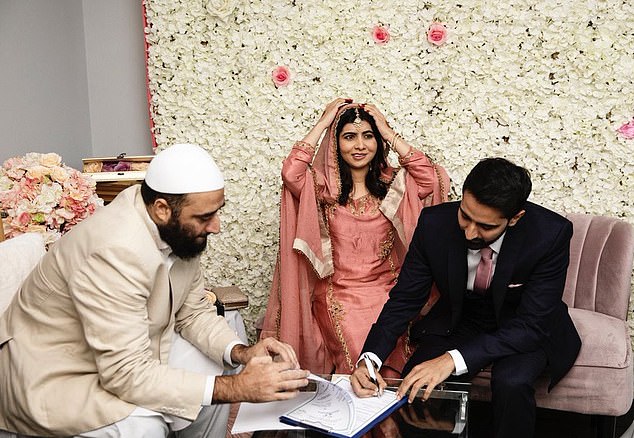 In an interview with Vogue in June, Malala teased the fact she never considered getting married until the second year of her PPE degree at Oxford University – which would have started in 2019.

She also spoke of how her father was often propositioned by prospective families looking for her hand in marriage in Pakistan.

The couple may have first crossed paths while working for the World Economic Forum’s Global Shapers Community, where Malik started out as a curator from 2016 and Malala spoke at global conferences.

Malala shared sweet photographs from the wedding day, where she wore a beautiful pink bridal gown, to Twitter.

She captioned the photographs: ‘Today marks a precious day in my life. Asser and I tied the knot to be partners for life.

‘We celebrated a small nikkah ceremony at home in Birmingham with our families. Please send us your prayers. We are excited to walk together for the journey ahead.’

On his own Twitter post, Malala’s father said he and his wife were ‘overwhelmed with joy and gratitude.’ adding ‘Alhamdulillah,’ an Arabic phrase meaning ‘praise be to God’. 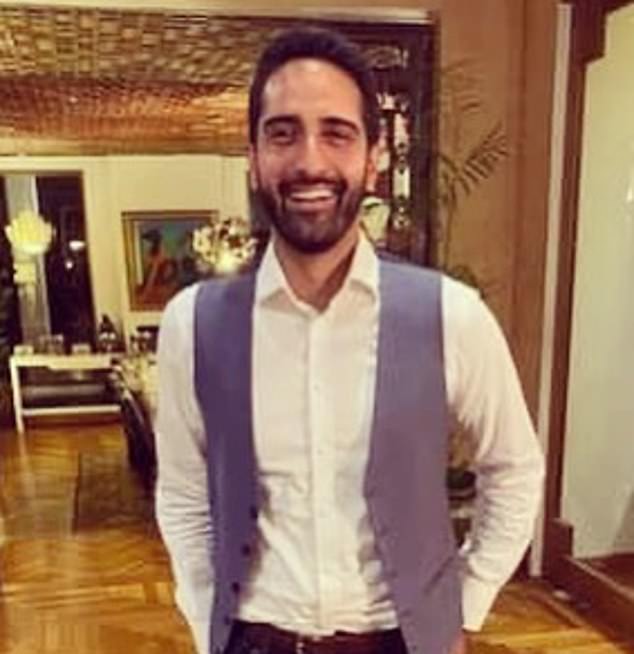 This summer, Malala had alluded to the fact she had met someone in 2019 – now revealed to be Mr Malik (above) – and questioned why people needed to get married in an interview with Vogue 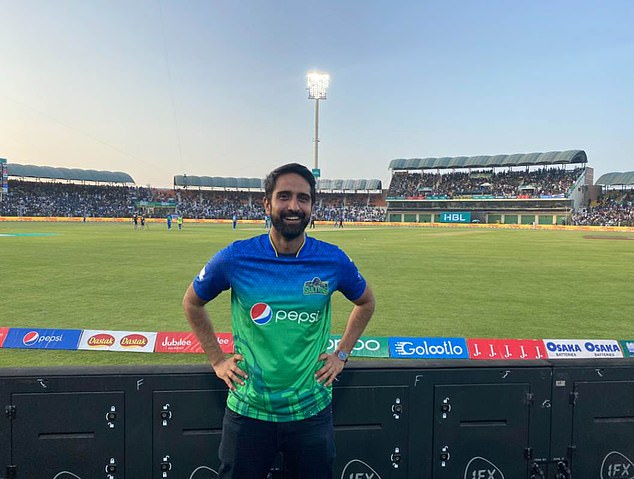 After university, Malik worked for a host of companies in Pakistan, the biggest among them being Coca Cola, until he began working for the Multan Sultans in 2018. In 2019, Malik moved on to player management and consultancy with MLK Management, where he served as managing director for just over a year

Malala also alluded to the fact she had met someone who was ‘great’ and may have changed her perspective on marriage in her Vogue interview.

‘I would say that I have come across people who have been great, and I hope that I do find someone who understands me, respects me, and loves me and takes care of me.

‘I’m going to be happy and live with my family forever.’

‘I didn’t realise that you’re not the same person all the time. You change as well and you’re growing.’