EXPRESS INFORMER > News & Politics > Assassin who shot mother-of-nine, 53, and her sleeping nephew, 21, is jailed for at least 40 years

An assassin who crept into a family home and shot dead a mother-of-nine and her sleeping nephew in a botched revenge hit has been jailed for at least 40 years.

He executed student Bervil Kalikaka-Ekofo, 21, and his aunt Annie Ekofo, 53, after sneaking in through the unlocked door of their apartment in East Finchley, North London, in September 2016.

The killing was intended as a revenge hit after rivals – including Ms Ekofo’s son Ryan Efey, 22 – shared footage of him being attacked on Snapchat,  the Old Bailey heard.

Mr Efey was probably the intended target but Ezeoke decided he would kill anyone in the flat.

Sentencing him today, Judge Mrs Justice Cutts said she had considered a whole-life order but ultimately opted for life with a minimum term of 40 years.

She said: ‘Your cold, callous and brutal murders of two people has not only cut short their lives but has ruined the lives of many.’

Juries in May 2018 and March last year failed to reach verdicts, despite the majority of jurors supporting a conviction.

In 2017 trial was stopped after a judge was forced to withdraw with agonising back pain.

Prosecutors made the exceptional choice to pursue a fifth trial after his last hearing collapsed due to the coronavirus pandemic in March.

Student Bervil Kalikaka-Ekofo, 21, (left) was shot in the back of the head by the assassin, prompting his aunt Annie Besala Ekofo, 53, (right) to investigate. She was shot in the chest

Defence solicitors for the killer had argued against a fifth trial, saying ‘enough is enough’.

Ezeoke’s lawyer James Scobie QC, said the case had a ‘unique’ history with the crown opting for an unprecedented fifth trial.

He said: ‘It is a case with unique history. I’ve told my client it’s no part of our opportunity or duty to comment on any shape or form as the result of this case.

‘It’s been a long road for everybody.

‘Whatever sentence is imposed today has to bear in mind that two people were murdered and murdered in a way that the defence accepted throughout the whole nature of this case.

‘He’s been a victim on three occasions himself one of which nearly cost him his life and one of which inextricably links him to the victims in this case.

‘The two desperate victims of this case. The whole connection as the court will know to that address related to a personal deep sense of grievance.’ 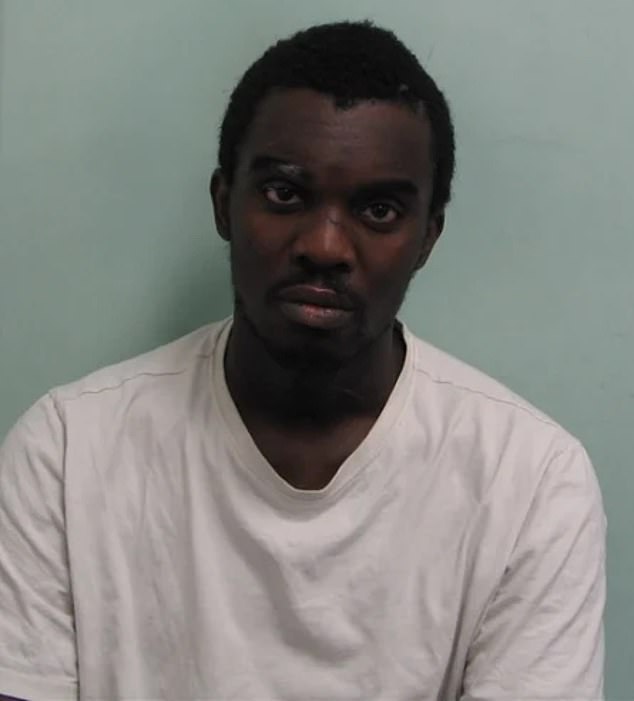 Obina Ezeoke, 28, was convicted today of the double murder at his fifth trial, following the brutal shooting in North London in 2016

Ezeoke fired a bullet into the back of psychology student Bervil’s head with a vintage Western-style revolver as at her apartment in East Finchley, North London.

He then wheeled around and blasted the victim’s aunt Annie Ekofo, 53, in the chest with the Smith and Wesson.44 when she came out of her bedroom dressed only in her underwear.

Neither Bervil nor Annie were the intended targets, the court was told.

Ezeoke carried out the killings as part of a ‘vendetta of violence’ before fleeing the scene in a Vauxhall Meriva at around 6.30am in the morning.

He maintained that he had been on Grahame Park estate in North London with four friends at the time of the murders. 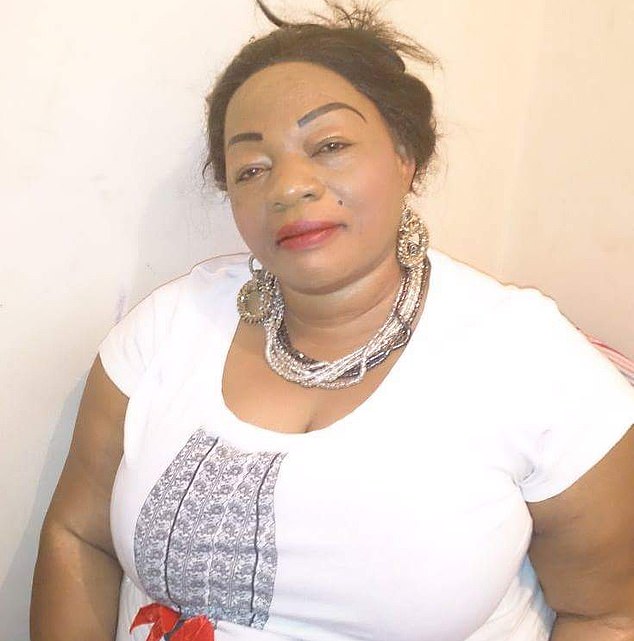 Ezoeke slumped to his seat after a jury convicted him of the murder of Annie Ekofo, above, and her nephew

The killer claimed that gunshot residue particles discovered in the getaway car, which evidence showed had been bought and insured by him under a false name, came from a different shooting when others had used the vehicle.

Prosecutor Mark Heywood said: ‘Ezeoke went there quite deliberately, with a gun and of course sufficient ammunition to use it, to attack and kill one of the young men of the family.

‘His hate was such that he did not falter when confronted by a second person and he simply took her life as well. Both lives taken were wholly innocent.’

Mr Kalikaka-Ekofo was visiting the flat in East Finchley at short notice for one night only so he was not one of those who could have been expected to be there.

‘It was two separate murders within a short space of time,’ said Mr Heywood.

‘No one could, or will, we understand, possibly suggest anything else.

‘These were execution killings, in effect.’ 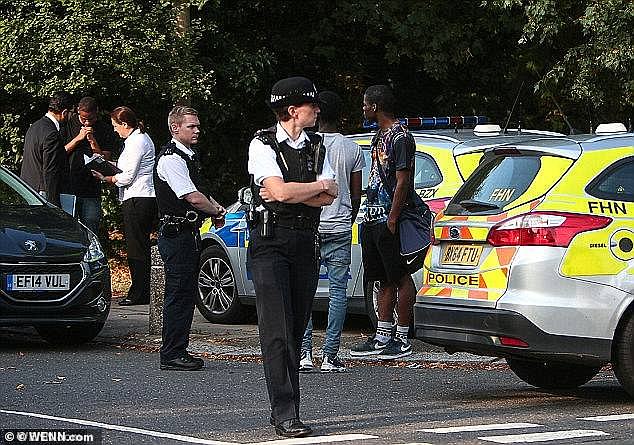 A trial at the Old Bailey heard Ezeoke crept into the family home in East Finchley, London and targeted the aunt and nephew as an act of revenge, after a rival gang, including Ms Ekofo’s son, attacked him and posted the video on Snapchat

Mr Heywood added: ‘There had been a trend to modify ammunition to fit vintage weapons like the revolver and the overall likelihood is that that is what was done here.

‘One of the typical guns you might see in a Western movie.’

Mrs Ekofo, who came to the UK with her husband from the Congo in 1991, lived with her family at the flat in Elmshurst Crescent in East Finchley.

Four other people were also in the house but were unharmed in the attack.

Mr Heywood told the court: ‘Just after dawn in the early Autumn of 2016, an assassin crept noiselessly into a second floor family home.

‘He had waited until that time in order to be able to get into the block.

‘By his great good fortune, the door of the home was not locked. 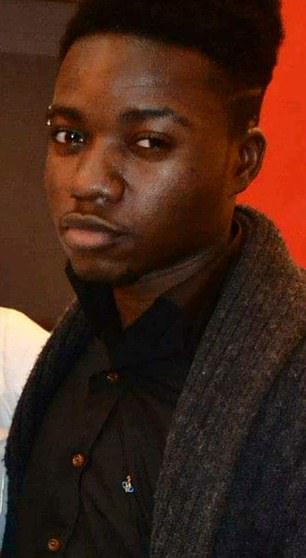 Mr Kalikaka-Ekofo was only visiting his aunt’s flat at short notice that night, the trial heard

‘The layout of that flat, mirrored by others on the same estate, was probably known and clearly understood.

‘At first, not one of the six people sleeping inside it heard anything at all.

‘The killer moved forward to his left and then into a bedroom.

‘There, just in front of him, was a young man lying on a thin mattress on the floor under a duvet, his head nearer the door resting on pillows.

‘For the killer, this was as good a target as he could expect, a young man of this home, this house, of just the right age.

‘He crept forward, gun in hand.

‘His weapon was a deadly one, perfect for concealment in close quarters use, repeatedly if necessary. It was a revolver.

‘The killer raised the muzzle just enough and placed it at the back of the sleeping head.

‘And then, with a deliberation and purpose that was as cowardly as it was murderous, he simply pulled the trigger.

‘The silence of the home, the neighbourhood, was shattered and the life was immediately taken.’

At the sound of the ‘noise and so the hell he had just unleashed’ Mrs Ekofo came out from her bedroom down the hall to investigate.

‘The killer did not hesitate,’ said Mr Heywood.

‘Given his purpose and because he could not afford to be seen, and so caught, it suited him to use the weapon again.

‘Rather than simply raise it for example to threaten or ward off, or just simply turn and run out of the front door, he instead levelled the weapon a second time and he pulled the trigger, even as the nearly naked woman bent away from the lethal danger that must have been obvious.

‘His aim was central, towards the chest and the vital organs.

‘For the second time in one minute the killer took a life.

He then fled back to a black vehicle and returned to ‘safe ground’ on another estate, the court heard. 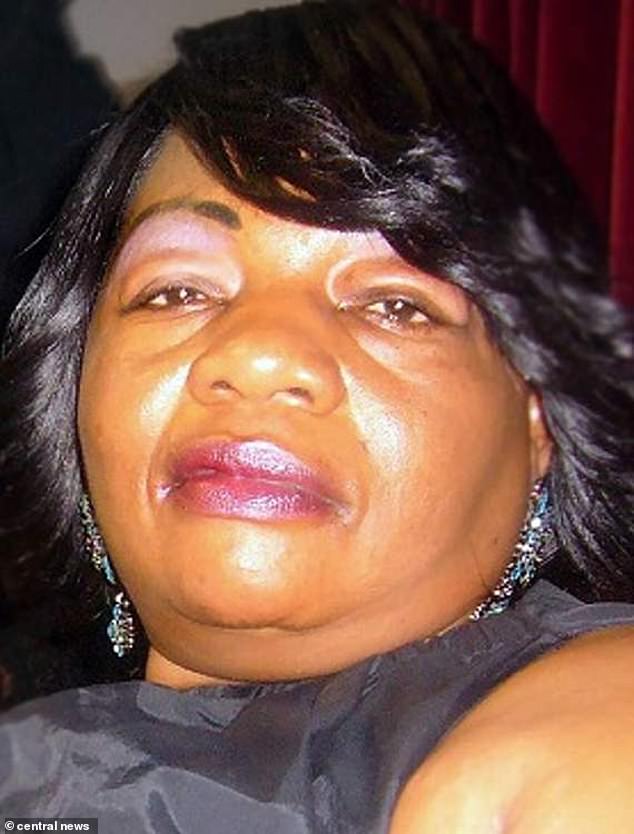 Annie Efoko was killed as she investigated the sound of the gunshot that had killed her nephew, a trial at the Old Bailey heard

Ezeoke, of no fixed address, denied but was convicted of two counts of murder on a majority of 11-1.

Sally-Anne Russell, from the CPS, said: ‘This was an execution of two family members within the space of about a minute. Obina Ezeoke’s actions have devastated a family.

‘Both victims were entirely innocent.

‘Nobody saw exactly how these events unfolded but the prosecution case included evidence of Ezeoke’s control of the car, CCTV footage of the car travelling to and from the scene, as well as a gun case discovered under Ezeoke’s bed, gunshot residue evidence and proof of the ongoing feud between Ezeoke and other members of the family involved.

‘Although Ezeoke denied any involvement in the killings, the jury accepted the prosecution case and convicted Ezeoke of both murders.

‘I hope the family and friends of both Annie Besala Ekofo and Bervil Kalikala-Ekofo can be satisfied that justice has now been served.’