As Usman Khawaja whipped Jack Leach for three towards Sydney’s beguiling, green-roofed pavilion, and soaked up the adulation at a ground he once called home, it was hard not to be reminded of another of the many differences between Australia and England during this hopelessly lop-sided series.

While Joe Root has turned to old faces out of desperation, Pat Cummins has been able to refresh from a position of strength.

Khawaja is a 35-year-old Covid substitute who had not played Test cricket for two and a half years. Yet here he was, bringing the SCG to its feet with an elegant hundred that formed the backbone of Australia’s 416 for eight declared on the second day of the fourth Test. 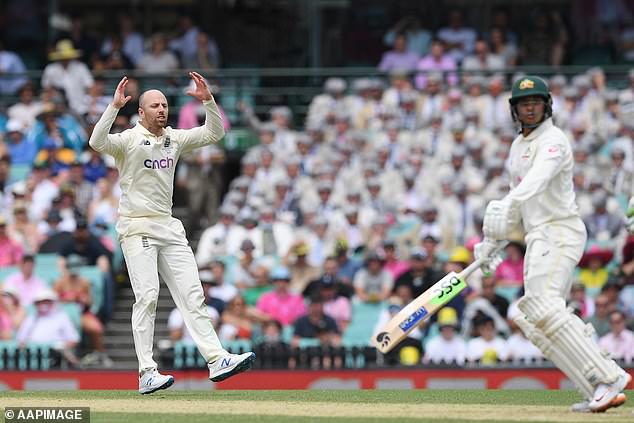 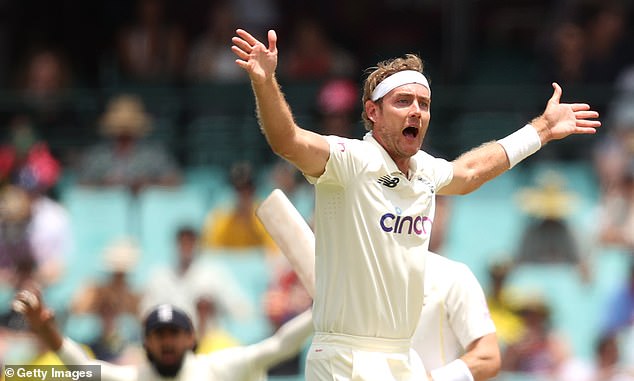 Stuart Broad was the pick of the England bowlers, taking five wickets in Sydney

England replied with 13 without loss, though not before Zak Crawley was caught at slip off a Mitchell Starc no-ball before he had scored. There is a mountain ahead.

As for Khawaja, it goes without saying on this tour of gaffes, blunders and mishaps that he was dropped along the way – by Root at slip off Leach when he had 28. Perhaps Root was distracted by the fact that the ball brushed the glove and thigh of wicketkeeper Jos Buttler en route. But good teams create other chances – and England, right now, are not a good team.

There were five wickets for Stuart Broad, beginning 2022 by making the kind of point he specialises in, and little luck for Mark Wood, whose series haul of six wickets at 39 is fast becoming a travesty.

But the pros were outweighed by the cons, and not for the first time either. Ben Stokes left the field mid-over before lunch suffering from tightness in his left side, and didn’t bowl again. Leach, that once chance aside, looked anodyne, as he has all winter. And Jimmy Anderson could not convert his accuracy into wickets.

Yet again, England are up against it. Yet again, they are praying for rain.

Khawaja, though, was superb. Called up because Travis Head caught Covid, he batted as if he had forgotten nothing about Test-match batting since he last appeared, at Headingley in 2019, back in the days when Stokes was capable of winning Ashes games on his own.

For much of a quiet morning and in the early part of the afternoon, much of the attention was on local boy Steve Smith’s attempts to score his first hundred of the series. He looked set fair, too, but on 67 he nibbled at Broad, who immediately turned to Wood at mid-off, as if to celebrate some cunning plan. 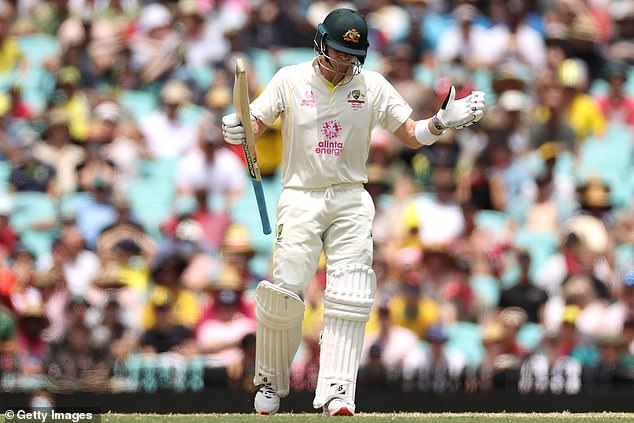 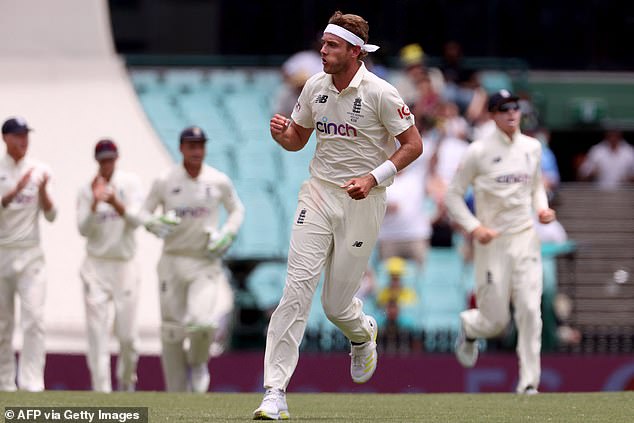 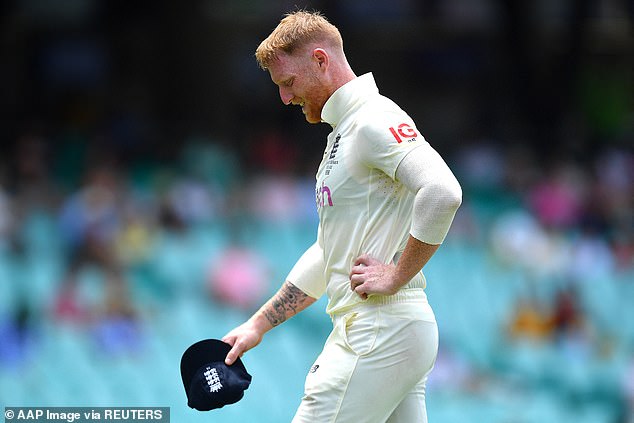 One concern for England is the fitness of Ben Stokes, who appeared to hurt his side

Broad quickly added Cameron Green, caught low down at third slip by Crawley for five, and when Alex Carey miscued a slog sweep off Root, Australia were 285 for six – useful, though not decisive.

But Khawaja reached his ninth Test century, and second against England – both at Sydney – in the last over before tea, and reasserted Australia’s dominance. First he added 46 with Cummins, who was eventually caught behind off Broad on review for 24, having gloved a lifter without umpire Rod Tucker noticing. 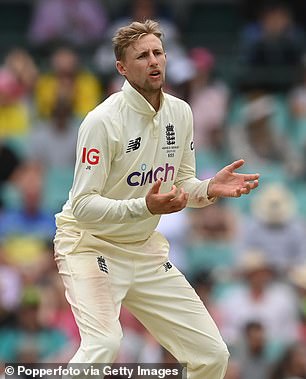 Then Starc helped him put on 67 for the eighth wicket, before Broad bowled Khawaja off a thick inside edge for 137 to collect his second Ashes five-for in Australia. Khawaja left to a standing ovation, having steered Australia through the bulk of the day into a position from which defeat is unthinkable.

While England have felt obliged out here to return to the likes of Crawley and Jonny Bairstow, with underwhelming results, Australia could pluck from their system a player with a Test average of 40. Khawaja left decisively, drove fluently, and pulled cleanly. Perhaps the lesson his opponents might most usefully have absorbed is that he made it all look simple.

If there was any consolation for England – though they may not have seen it that way – then it came in the strokeplay. While David Warner bludgeons, Marnus Labuschagne fiddles and Smith fidgets, Khawaja caresses. There was little he did during 10 minutes shy of seven hours at the crease that was ungainly or contrived. 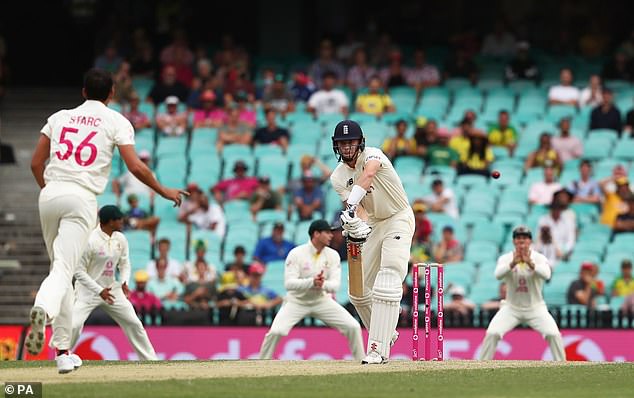 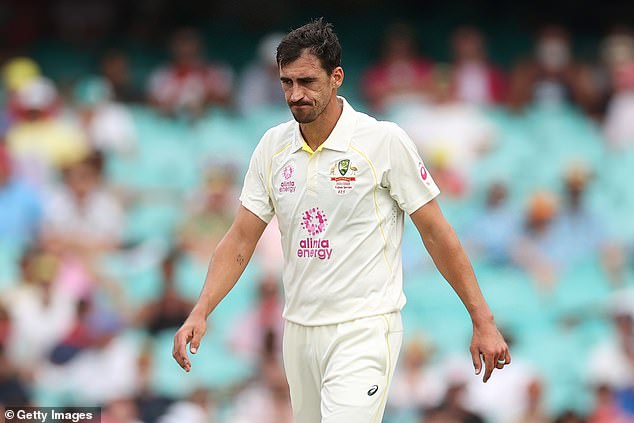 With Head available again for Hobart – and Australia’s leading run-scorer in the first three Tests – the home selectors will face a conundrum. But, well, what a conundrum to have.

England’s bowlers, by the end, looked exhausted. The declaration came when Nathan Lyon pulled Broad for six, and seemed to run off almost with the ball still in the air – a final indignity on a long day.

Perhaps the most dispiriting sight was that of Leach wheeling away in vain, and taking his series aggregate to two wickets at 117 apiece. A player apparently considered England’s best spinner had needed until the fourth Test of the Ashes to bowl his first maiden, and bowled an unthreatening one-day line outside the left-handers’ leg stump.

A good operator in helpful conditions, he has been reduced in Australia to trying to bowl maidens rather than take wickets. In that endeavour, like so many others, England have fallen short.