EXPRESS INFORMER > Business & Finances > As the FTSE 100 nears record high, what does it mean for investors?

In isolation the FTSE 100’s performance last year might have disappointed investors given it ended the year where it started.

But in the face of global volatility, the UK’s blue-chip index held firm as the global stock market fell almost 20 per cent.

The FTSE 100 is up 5.4 per cent over the past month and with a closing peak of 7,860 on Monday it flirted with a new record high, despite sticky inflation and a cost of living crisis.

The record closing high for the FTSE 100 is 7,877.45 and although the index has slipped back over this week, it could be set for another tilt at a new top soon.

On the up: The FTSE 100 is closing in on a record high gaining four per cent in the first few weeks of the year

What has prompted the FTSE 100 to surge?

Investors have flocked to UK stocks since mid-October with the FTSE 100 up 13.5 per cent and the more domestically-focused FTSE 250 up 18.3 per cent.

That reflects a clear uptick in investor confidence, but the UK stock market is also proving interesting for reasons beyond general sentiment.

The FTSE 100’s relatively high dividend yield is attractive to income-seekers and the index has ‘delivered better total returns to investors over the years than the headline market level might suggest’, says Tom Stevenson, investment director at Fidelity.

It is also boosted by some of the major players in the index. High oil prices, which have stayed elevated since the Ukraine invasion, have helped buoy leading stocks like BP and Shell, which both delivered bumper profits last year.

The price of oil is expected to remain elevated as easing restrictions in China raises hopes of a recovery in demand from the world’s top crude importer, which has helped to boost the FTSE.

It’s possible that despite a good run, the FTSE 100 could surprise on the upside. Russ Mould, investment director at AJ Bell notes analysts have already slashed earnings estimates so a lot of the bad news is priced in.

It might go some way in explaining why investors are flocking to retailers after they reported stronger-than-expected appetite from consumers over the Christmas period.

The economic backdrop is an important factor as the market becomes cautiously optimistic. This week’s figures show the economy did not contract in November as had been widely predicted.

Inflation is widely accepted to have peaked. This year it is expected to cool and interest rate hikes are forecast to  start to pause, with the Bank of England will pivot to cutting in the second half.

Mould says: ‘This is what the two-year Gilt is telling you – it traditionally leads the Base Rate by 6 to 9 months and it is sat 3.40 per cent, below the 3.5 per cent base rate, even though economists are talking of rate hikes to 4.5 per cent by June.

It seems the FTSE 100 is in good stead but Stevenson urges some caution.

‘It’s worth remembering that it has taken nearly five years for the FTSE 100 to recover its previous high and, even at this high level, it is still less than 15 per cent higher than its dot com peak at the end of 1999.’

UK stocks are generally considered cheap compared to other markets, and indeed against its own history.

On a price/earnings ratio of just under 12 and a yield pushing 4 per cent, Mould says the FTSE 100 ‘represents value, especially to overseas investors who get the additional benefit of the currency.

‘Sterling is still yet to recapture the ground it lost against the dollar and the euro in the immediate aftermath of 2016’s vote on EU membership.’

The FTSE 100 is not suited to low-inflation, low-growth, low-interest-rate murk, but it may be better suited to an extended period of higher inflation

If oil and gas, financials and consumer staples are set for another strong year in the face of sticky inflation and high energy prices, the FTSE 100 stands to benefit.

‘You can argue the FTSE 100 deserves to be cheap, given its reliance on the unpredictable (miners and oils), the indigestible (banks and insurers) and potentially a few pedestrian plodders (consumer staples, telecoms, utilities) and some may question the earnings and dividend forecasts, should a really deep recession hit,’ says Mould. 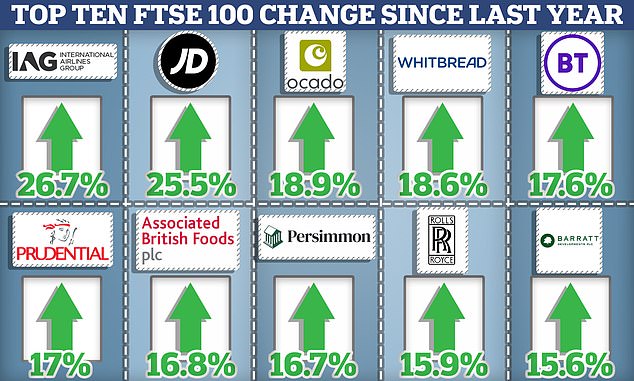 ‘But if inflation proves sticky then commodity plays could come into their own (at least if history is any guide), utilities offer some index-linked revenues and consumer staples offer a degree of pricing power when it is most needed.

‘The FTSE 100’s make-up is not suited to the low-inflation, low-growth, low-interest-rate murk which characterised the 2010s, but it may be better suited to an extended period of higher inflation, higher energy costs and higher interest rates, if indeed that is what we are going to get.’

Jason Hollands, managing director of Bestinvest adds: ‘Some may wonder whether a peak in the index might be a sign that UK-larger companies shares are now expensive and pondering whether it is a time to sell rather than buy or hold.

‘I would strongly argue that the current level of the FTSE 100 should not cause any concern: UK larger-company shares are in fact very attractively valued.’

Will the FTSE 100 continue its strong streak?

The FTSE 100 has started the year on the front foot, but can the good times continue?

If China sees a successful reopening of its economy and demand for oil and materials grows the energy sector stands to benefit. Similarly, the defensive nature of the index will be attractive should the UK enter a recession.

There might be some harder issues to tackle in the second half of the year if wage growth stays strong, inflation is sticky and oil prices keep rising.

‘The danger is the Bank of England does move early to jumpstart the economy and goes too early, as the Fed did and the UK Chancellor did in the late 1970s, stoking a new wave of inflation that requires more drastic action and a deeper downturn than the first to quell it. That would spell trouble,’ says Mould.

While recent figures show inflation slowed for the second month in a row to 10.5 per cent, it will take some time to settle at its pre-2022 level. 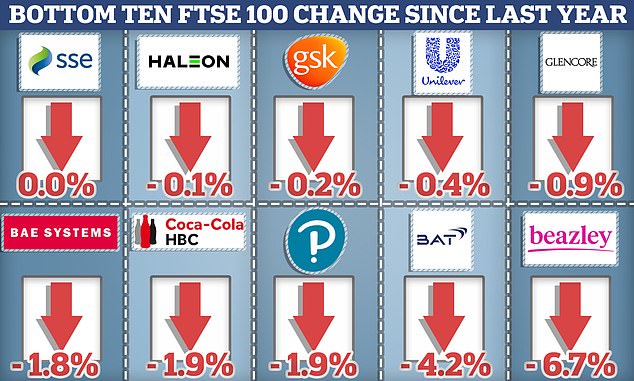 This could give the FTSE 100 an advantage given its defensive tilt and cheaper valuations as interest rates rise to curb soaring inflation.

‘The question now is whether this is an aberration – and we return to the low-growth, low-inflation, low-interest-rate mush of the 2010s which served growth stocks and quality compounders (and fixed income) so well, or we are indeed entering a different era, whereby more expensive labour, energy, goods and money mean different portfolio solutions are needed – and the FTSE 100 underperformed markedly in the 2010s,’ says Mould.

It won’t be plain sailing for the FTSE and investors will want to consider how a further rally in sterling might start to weigh on the FTSE.

Edward Allen of Tyndall Private Clients says: ‘The US Dollar strengthened by 12 per cent over 2022, and this both increased the value of overseas earnings for our domestic stock market, and helped investors who chose (unhedged) US Dollar denominated investments. Win-win right?

‘The problem comes if and when Sterling strengthens against global currencies.’

This would see overseas earnings of the UK-listed multinationals being worth less than converted back to GBP.

‘Currencies are complicated and it is too simplistic to say ‘strong is bad’ or vice versa. However, it is a risk, and perhaps an underappreciated one after so many years of Sterling weakness.’

The FTSE 100 doesn’t capture the UK market as a whole and the FTSE 250 is often considered more reflective of the fortunes of the UK economy.

While the index fell into a bear market last year and is still nearly a fifth below its all-time high, it is up 2.7 per cent this year already.

Could investors look to the FTSE 250 for beaten up shares?

Mould says: ‘In the view that you can have cheap shares and good news, just not both at the same time, it is possible there could be value to be had here, too.’

If the FTSE 100 rally is anything to go by, markets are now cautiously optimistic the UK might be able to swerve a recession and if there is one, it won’t be as bad as previously expected.

Dean Turner, chief UK and Eurozone economist at UBS Wealth Management last week said: ‘The economic reality will likely be less bad than the headlines suggest. Furthermore, we believe that UK equities can continue to perform well in the coming months.’

Once the economy starts to recover, cyclical sectors like housebuilders, engineers, construction, REITs and retailers, which all plummeted last year, will start to recover.

Mould says: ‘Those firms with strong competitive positions, capable management and the sort of strong balance sheet that will see them through to the other side of any downturn without undue alarm could merit long-term, patient support, even if it might be a bumpy ride.

‘A second or third wave of inflation could force central banks to keep interest rates higher for longer and that could set up the UK market for a tricky 2024.’

Where should investors look for UK exposure?

‘By virtue of implementing its contrarian value approach, the fund seeks out of favour, lowly valued assets, which offer potential for capital appreciation (and income) for investors over a longer run. Focus on risk-adjusted returns is a core pillar within the process.

She also notes Fidelity UK Special Situations, which has a bias to mid and small caps which have gone through a sustained period of underperformance, but the risk of further downside is limited.

‘The managers favour sectors where change can happen quickly and where a diverse range of business models provide the potential for mispriced stocks. The fund held up well throughout 2022, despite mid- and small-cap stocks selling off aggressively.’

Jason Hollands of Bestinvest highlights the UK equity funds on its Best Funds List which have high exposure to larger caps.

These include the Evenlode Income fund, the Ninety One UK Alpha fund, Redwheel UK Equity Income fund and the JPMorgan Claverhouse Investment Trust.

One of the simplest ways to gain exposure to UK large companies is a low-cost tracker fund.

FTSE 250 exposure: Vanguard FTSE 250 ETF – offering exposure to FTSE 250 market, operating a physical replication strategy. The underlying index has a bias to financials and industrials, which together account for c.60% of the overall portfolio.

*AJ Bell does not provide any financial advice or tips/recommendations.