Ever since I was a boy I’ve loved football. Yet like every other England fan too young to remember 1966, I’ve known more than my share of heartbreak.

So for me, as for other England fans, tomorrow’s final feels personal.

It’s a chance to exorcise the demons of the past, and taste the one thing we always feared was beyond us — glory.

Not everybody lives and breathes the beautiful game. But one of the wonderful things about England’s run to the Euro 2020 final is that it has captivated so many people who don’t usually care about football at all.

Only football can do this. Other great sports, such as rugby and cricket, have plenty of admirers, and in my lifetime England have been world champions in both.

But football is different. For all the players’ professionalism, it remains a game of simplicity, the same game our Victorian predecessors played in the shadow of their long-vanished factories.

‘The working man’s ballet’, a former England player called it — and he was right.

Now, after a dark and depressing 18 months, England’s footballers have captured the national imagination.

Skilful, humble and hard-working, Gareth Southgate’s boys represent our country at its very best, standing tall on the international stage.

Of course it’s only a game. Deep down, even I know that. But when the referee blows his whistle and  the players kick off, it will be everything.

So here’s my guide for the football fans who, until this week, didn’t know they were fans. Come on, England!

MANAGER WHO RESTORED OUR PRIDE

In 1996, Gareth Southgate knew the worst agony football has to offer. With millions glued to their screens, he stepped up in the semi-final penalty shootout against Germany — and missed.

Nobody cares about that now. Having taken the national team to a semi-final in Russia in 2018, Southgate has now gone one better. England are just 90 minutes from glory, and everybody knows he deserves much of the credit.

Ironically, he only inherited the job as a stop-gap, but acquitted himself so well he has never left.

He has built the most effective England team since the 1960s: composed and conservative, building to a devastating crescendo.

But Southgate’s impact goes well beyond success on the pitch. In his own words, he has ‘never been good at gambling, drinking, fighting, tantrums, celebrity’.

But win or lose, he has made us proud to be English.

As England manager, one of Southgate’s most admirable qualities has been his flexibility.

Instead of sticking with a rigid system, he tailors his approach to the opposition. His most trusted stalwarts make up the spine of the team, but the supporting cast rotates as he sees fit.

Tomorrow, England are likely to kick off in a 4-2-3-1 formation, with Jordan Pickford in goal and four rugged defenders in Kyle Walker, Luke Shaw, John Stones and Harry Maguire, protected by two midfield pivots in Declan Rice and Kalvin Phillips.

To create chances, the team relies on the quicksilver Mason Mount and flying wingers Raheem Sterling and Bukayo Saka. 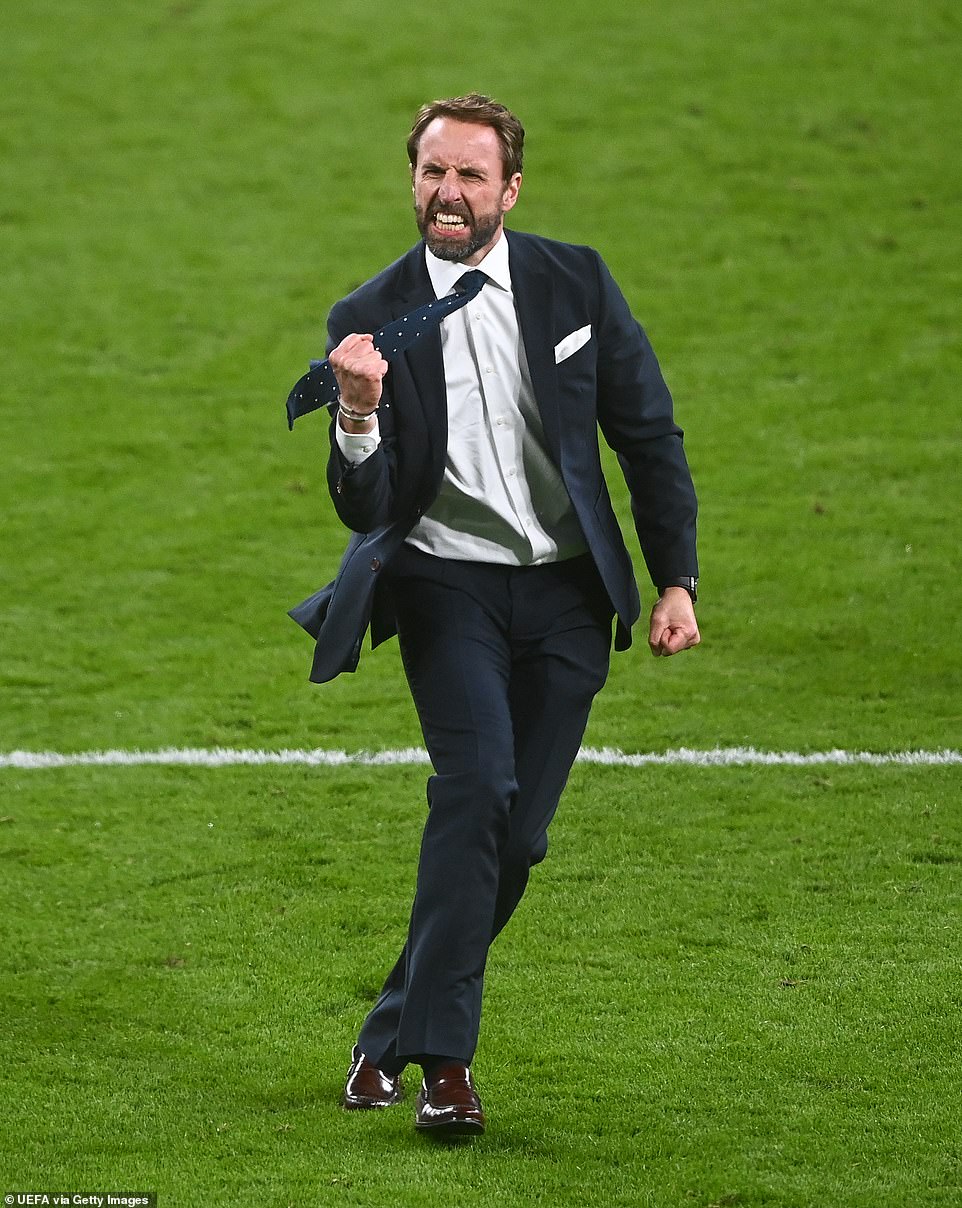 As England manager, one of Gareth Southgate’s (pictured) most admirable qualities has been his flexibility. Instead of sticking with a rigid system, he tailors his approach to the opposition

Leading the line, there are few better strikers in the world than England’s captain, Harry Kane.

Even if they go behind — as against Denmark on Wednesday — they remain patient, working the ball across the pitch until they can carve out a chance.

If England are trailing, Southgate will probably take off one of his defensive players and bring on the fans’ favourite Jack Grealish or the gifted Phil Foden.

But if we’re leading, he may prefer to batten down the hatches, sacrificing one of the wingers for midfielder Jordan Henderson or defender Kieran Trippier.

Gianluigi Donnarumma: A domineering presence, the 22-year-old goalkeeper and poster boy of the Italian team has conceded only three goals in the tournament so far. At 6ft 5in, the new Paris Saint-Germain signing fills the goal — and has an excellent record in penalty shoot-outs.

Leonardo Bonucci: With multiple winners’ medals and more than 100 Italy caps to his name, the vice-captain, 34, is a rock-solid presence in team’s backline. Will use his vast experience and  anticipation to try and shackle Harry Kane.

Jorginho: Already familiar to many in the England squad, the 29-year-old wily Chelsea player marshals Italy’s midfield and rarely misses a penalty. He dictates the pace of play and sits in front of the veteran centre-halves cutting out through balls.

Marco Verratti: Verratti is Italy’s most technically able player even though he is still struggling with his fitness. The 28-year-old PSG midfielder is a force to be reckoned with, too, and loves biting into tackles.

Lorenzo Insigne: He’s just 5 ft 4 in, but the Napoli player has often been at the heart of Italy’s dazzling attacking displays during the tournament. He loves to cut in from the left and use his favoured right foot to shoot at goal.

THE BLUES BOSS GOING FOR GOLD

Italy boss Roberto Mancini is a master motivator who will inspire his troops by making them believe anything is possible.

He is a football obsessive and always has been, even making tactical suggestions to his managers during his playing days before becoming the main man himself at Fiorentina at just 36.

He has turned Italy’s fortunes around spectacularly after they missed out on qualification for the 2018 World Cup before his appointment. The national team is now on an incredible 33-match unbeaten run. 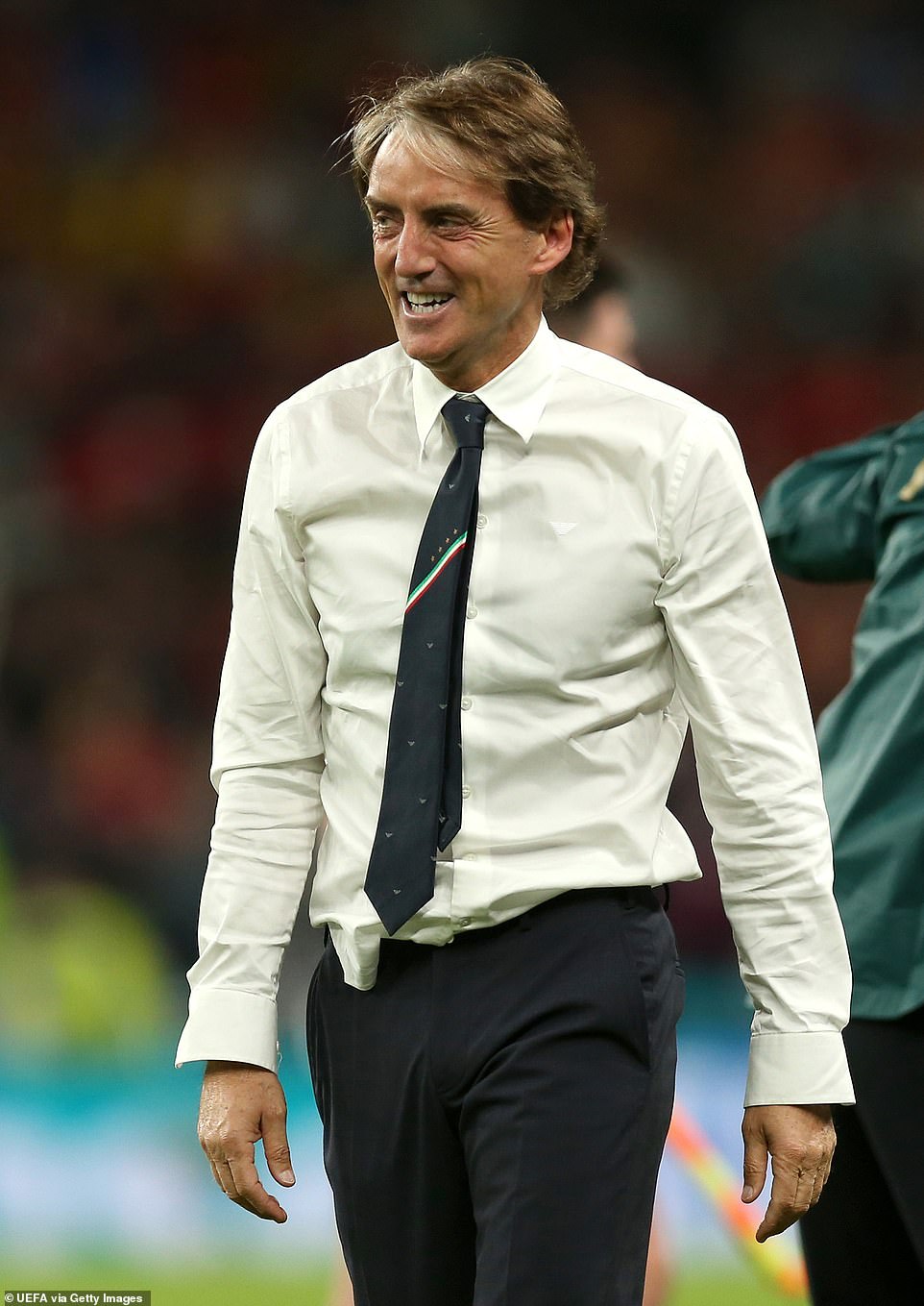 The Italians will be the most formidable team England have faced — skilful, ruthless and battle-hardened.

Their manager, Mancini, knows everything about the English game, having once steered Manchester City to the Premier League title.

Italy have stuck to a 4-3-3 formation — that’s 4 at the back, 3 in midfield and 3 at the front to attack — throughout the tournament with the two elder statesmen Leonardo Bonucci and Giorgio Chiellini (combined age 70) masters of the dark art of defending.

The left full-back, Leonardo Spinazzola, had been a real attacking threat until he was injured in the quarter-final win over Belgium.

His replacement, Chelsea’s Emerson Palmieri, is not in same class. Right-back Giovanni Di Lorenzo tends to stay back, allowing the other full-back to push on.

Chelsea’s midfielder Jorginho sits in front of the centre-halves and controls play with his accurate passing, while livewires Marco Verratti and Nicolo Barella buzz around him, snapping into tackles.

Verratti in particular can be aggressive and is sure to test the patience of the referee.

In attack, the prolific Lazio striker Ciro Immobile is flanked by Federico Chiesa on the right, and he will look to take on England left-back Luke Shaw and get early shots away.

On the left is the skilful, diminutive attacker Lorenzo Insigne, who will cut in on to his favoured right foot and try to bend shots into the far corner.

Italy have strength in depth with both Matteo Pessina and Manuel Locatelli having scored twice in the tournament so far. But to win England must curtail the tactics of midfield general Jorginho. 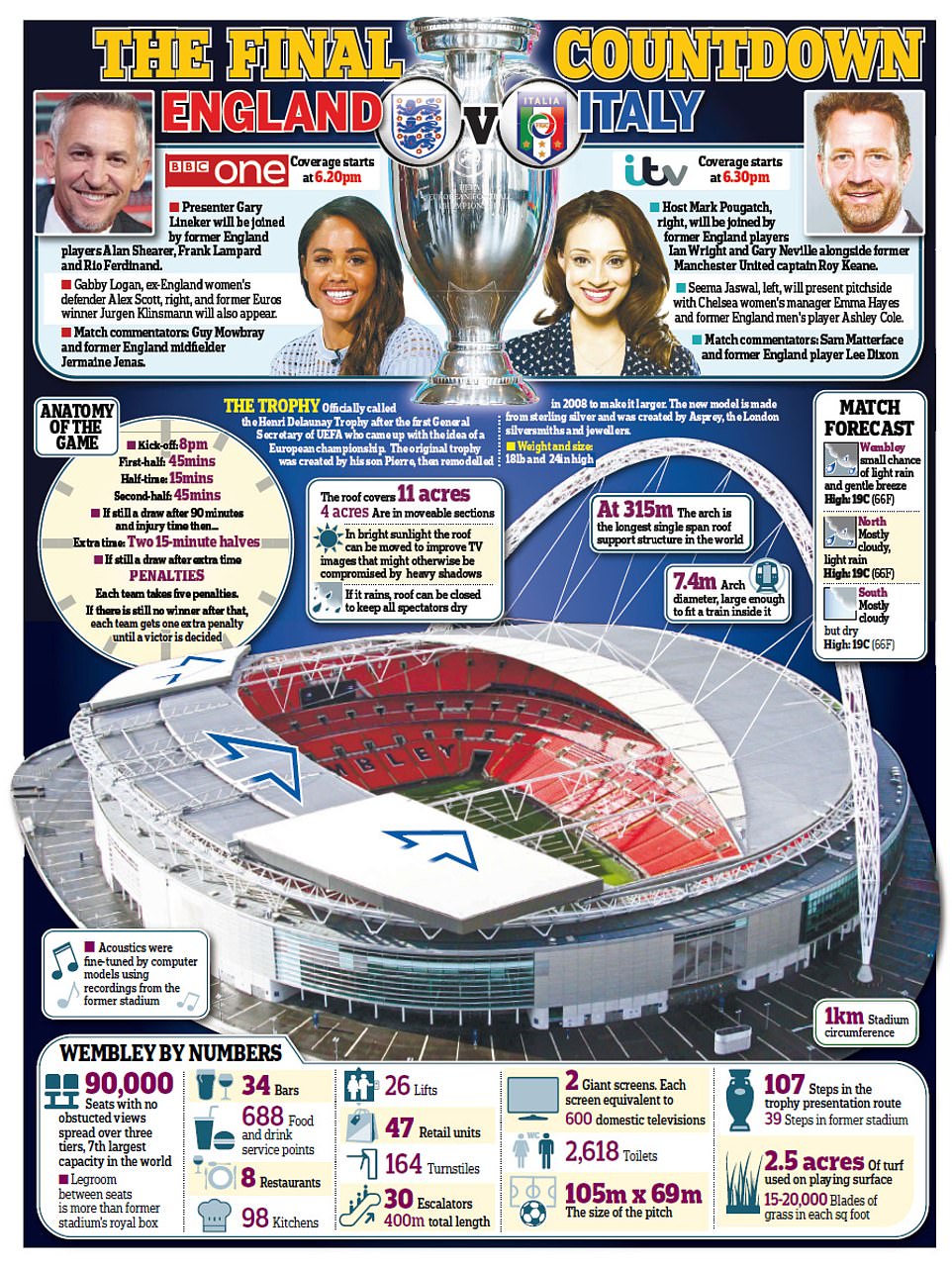