EXPRESS INFORMER > Health & Medicine > As the cost of food rises, we create recipes using a selection of cheap freezer basics

As the cost of food escalates it may seem more difficult to eat healthily, but in the freezer section of the supermarket is a range of staples that can be used to create wholesome, inexpensive meals — as these recipes here, developed especially for Mail readers, show.

Frozen food is often considerably cheaper because it has a much longer shelf life, which means supermarkets can bulk buy without fear of unsold food being wasted.

And it can be better for you: ‘Frozen food can often be more nutritious than “fresh”,’ says dietitian Dr Sarah Schenker. ‘Most fresh fruit and vegetables are picked before they are ripe, and stored, then treated, so they can ripen during transportation but, as a result, this gives them less time to develop a full range of vitamins, minerals and antioxidants.

As the cost of food escalates it may seem more difficult to eat healthily, but in the freezer section of the supermarket is a range of staples that can be used to create wholesome, inexpensive meals — as these recipes here, developed especially for Mail readers, show

‘However, fruit and veg that’s destined to be frozen is picked at peak ripeness — when it is most nutritious — and immediately frozen, so it retains its nutrients.’

Frozen vegetables are blanched (dipped in boiling water) then frozen within hours of being harvested.

‘Although the blanching can cause a small loss of water-soluble vitamins such as vitamin C and B, once frozen nutrients are locked in,’ says Schenker. ‘Vitamin C levels in fresh foods can deteriorate over time, so studies have often found similar levels when comparing fresh with frozen.’

Frozen vegetables such as broccoli, cauliflower and green beans are often considerably cheaper than fresh.

Sarah Schenker recommends looking out for frozen berries (‘a great way to add natural sweetness’) and stocking up on frozen peas and sweetcorn (‘quick and easy extra veg that can be added to an omelette, pasta or rice’).

As part of an occasional series, Good Health asked Sarah Schenker to create recipes using a selection of cheap freezer basics. She says the key to creating a balanced, nutritious meal is to include a good source of protein (meat, fish, eggs, pulses), with healthy carboyhdrates (such as brown rice) and lots of vegetables.

NOTE: Cost-per-portion figures have been calculated using ingredients from a large online supermarket and subdivided into portions.

This meat is rich in protein and an excellent source of nutrients including vitamins B3 and B12 (for healthy blood), B6 (for the nervous and immune systems) as well as selenium and zinc.

Turkey is also a good source of the amino acid tryptophan, which the body uses to make the hormones serotonin and melatonin (for mood, and sleep respectively). Turkey breast mince (at 2 per cent fat) is usually lower in fat than beef mince (which can be labelled as 5, 10 or 20 per cent fat). Turkey leg mince might be five or seven per cent fat.

Cooking tip: You can substitute plant-based mince such as Quorn mince (£2.95 for 500g) in most mince recipes, and although slightly lower in protein, it has more fibre. Defrost your mince overnight in the fridge, if you prefer, although you can cook it from frozen in some recipes.

Turkey mince makes a lower-fat chilli than beef mince but is just as high in protein. Kidney beans add protein and fibre (one portion provides nearly all of a woman’s daily protein — 45g, men need 55g, according to the NHS — and over half your daily fibre needs of 25g) and the hidden vegetables add up to an impressive four of your five-a-day in one portion.

Fry onion and spices in the oil for five minutes, until softened. Add pepper and mushrooms. Cook for a further five minutes. Add mince and cook until it breaks up, then add tomatoes and kidney beans. Season.

Bring to the boil, then simmer for 30 minutes. Serve with rice, cooked as per packet instructions.

Any white fish such as basa, hake, cod or haddock is low in fat, calories and extremely high in protein — plus it’s an important source of iodine which is needed for thyroid and brain health.

Look for frozen salmon, which may be a little more expensive but adds extra omega-3s, which are good for heart health and have an anti-inflammatory action, which can help ease joint pain (freezing it doesn’t affect its omega-3 levels).

Fish also provides minerals such as zinc (for blood health and immunity), and is a good source of vitamin B6, which helps reduce inflammation.

Cooking tip: Choose plain fish without a breadcrumb coating, which is healthier and can often be cooked from frozen without the need to defrost.

This is a high-protein, high-fibre dish. The fibre from the butter beans can help reduce cholesterol levels and encourages the growth of healthy gut bacteria that strengthen immunity. One portion of stew also counts as three of your five-a-day.

Heat the oil and add onion, celery and paprika and cook for five minutes to soften. Add tomatoes and stock, season with salt and pepper and bring to boil. Simmer for 15-20 minutes to thicken sauce. Stir in frozen fish, chopped chorizo and butter beans. Cook for a further 20 minutes. Sprinkle with parsley. Serve with chunks of warm bread. 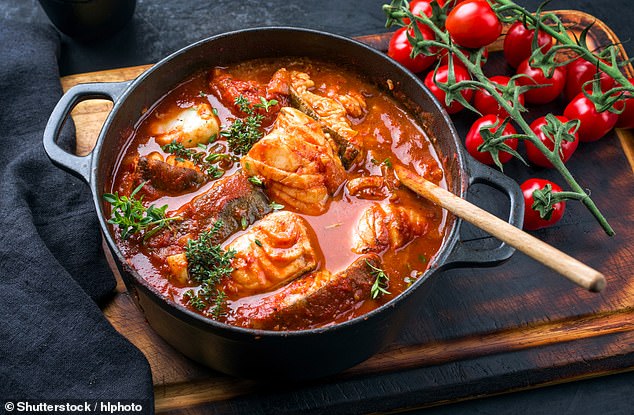 This is a high-protein, high-fibre dish. The fibre from the butter beans can help reduce cholesterol levels and encourages the growth of healthy gut bacteria that strengthen immunity

Coconut milk is highly nutritious, providing minerals including manganese, copper, iron and selenium. It contains a fat (called medium-chain triglycerides) more likely to be used for energy rather than stored in the body. Frozen peas boost protein, add vitamin C and provide one of your five-a-day.

Heat oil and add onion, ginger, garlic and chilli flakes. Cook for five minutes, or until softened. Add curry powder and cook for a further minute.

Pour in coconut milk, lime juice and 2 tbsp of water and bring to a simmer. Add fish and peas and simmer for 20 minutes. Serve with rice (cooked according to packet instructions).

These are one of the few plant sources of high-quality protein. Like meat, soya beans (also called edamame beans) contain all the essential amino acids the body needs for growth and are a good source of vitamins and minerals including iron, magnesium, phosphorus, potassium and copper.

The protein, antioxidants and fibre in soya beans can help lower cholesterol levels.

They contain plant compounds (isoflavones) which may ease menopausal symptoms, improve bone health in older women and reduce the risk of hormonal cancers.

Cooking tip: Swap peas for soya beans in any meal to boost protein and nutritional profile. 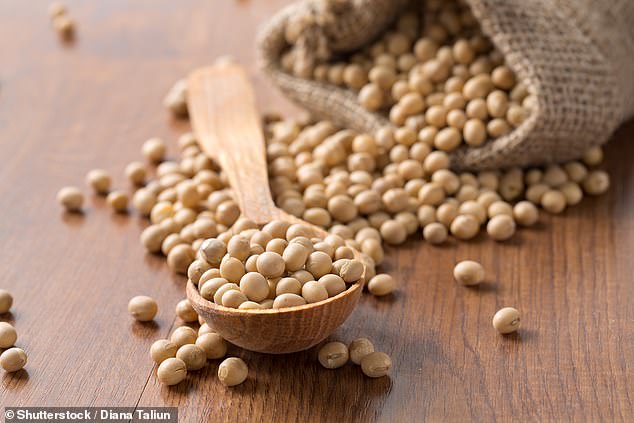 Like meat, soya beans (also called edamame beans) contain all the essential amino acids the body needs for growth and are a good source of vitamins and minerals including iron, magnesium, phosphorus, potassium and copper

A soya bean dip makes a nutritious alternative to hummus. The addition of artichoke hearts provides vitamin C, folate (vitamin B9), potassium (which helps regulate blood pressure) and luteolin (an antioxidant that can help lower blood cholesterol) and, along with the radishes, contain prebiotic fibre that good gut bacteria feed on.

Sift flour and add half a tsp of salt, 1 tbsp of oil and 150ml warm water. Mix into a smooth dough. Turn on to a floured surface. Knead for five minutes. Place in an oiled bowl, cover and leave for 30 minutes.

Blitz soya beans, the remaining oil, artichoke hearts, yoghurt, garlic, lime juice and mint leaves in a food processor to a rough paste. When dough is ready, divide into eight equal-sized balls. Use a rolling pin to make thin circles. Brush a pan with a little extra oil and cook one flatbread over high heat for two minutes on each side.

Repeat with the rest of the dough. Divide the dip between each flatbread and spread over evenly. Add grated carrot and radish slices and roll up.

Spinach is 90 per cent water (so is low in calories) but it’s a good source of beta-carotene (converted in the body into vitamins A, C and K which helps blood clot), iron and calcium.

It also contains plant compounds such as lutein, kaempferol, quercetin and zeaxanthin with powerful antioxidant and anti-inflammatory properties.

Cooking tip: The flavour disappears when you add it to sauces, which means you can add frozen spinach to meals to increase the nutrient content and even fussy eaters shouldn’t notice.

These delicious savoury pancakes make a well-balanced breakfast or brunch: they’re a clever way to incorporate spinach into the diets of picky eaters. Eggs are a good source of protein to keep you feeling full — 5g per egg. One portion will provide a third of woman’s daily protein and nutrients for healthy brain cells and brain function.

Place flour, baking powder, two eggs, 1 tbsp of melted butter, milk and spinach in a bowl. Add a pinch of salt and whizz with a stick blender to make a smooth batter.

Heat remaining butter in a non-stick frying pan and add small dollops of batter, making two pancakes at a time. Cook for two minutes on each side. Keep the pancakes warm.

Meanwhile, poach remaining eggs. Serve each pancake with an egg on top and a tomato salad on the side.