THE WARD IS FULL – BUT THE CASES JUST KEEP ON COMING

I’m a junior doctor at a city centre hospital in the North of England, but right now I feel more like a firefighter. Every day brings life-or-death decisions here where I work, on a Covid ward for the elderly. At today’s morning meeting, we’re told that four more patients have died over the weekend. It’s sad news, but it will free four beds – although that’s not enough for the terrible pressure we’re under.

In fact, we’ve just been ordered to transfer five sick patients out of the ward to make space for even more new arrivals from A&E, which is full to the brim. How do we choose when they’re all so gravely ill?

All around me people are fighting for breath, the colour drained from their faces, eyes staring out from behind oxygen masks.

The junior doctor speaks of people fighting for breath, wards full to the brim with the sick and more waiting in A&E

A specialist ‘palliative care’ team is on hand to soothe patients and keep them comfortable. But their odds of survival are poor. You don’t need to be a doctor to see that.

Many are distressed and I am, too, though I try not to let it show. These are people’s grandmothers and grandfathers.

I have particular responsibility for nine cases and spend the morning checking each one. We ‘prone’ some of the patients, which means that a team of doctors and nurses turns them on to his or her front. It’s hard work, made harder because many patients are worried or confused. Some complain they’re not comfortable on their fronts but it’s proven to aid breathing.

One man, who speaks a rare dialect of Punjabi, doesn’t understand and there’s no one here who can explain. We turn him over anyway despite his protests. Fortunately, he calms down.

The lack of oxygen leaves some patients delirious. One stuffs paper towels into the sink and turns the taps on, flooding his room. Nurses rush to mop up the mess.

At 3pm I realise I’ve not eaten anything all day. I normally survive on an apple but today I don’t have even that. I’m running on adrenaline. An hour later, two matrons appear and announce there are now 15 Covid patients in A&E with nowhere to go. They want us to take them. But our consultant takes a stand and says we won’t be bullied into moving people when they’re still too sick. But this is a desperate situation.

Ambulances are queuing up outside the hospital because there’s no more room. Urgent cases – Covid and others – are getting no attention. And there are fewer ambulances to go back into the city. Rumours of a third lockdown zip around the ward. We know most of the country will be fatigued by the news but we are pleased. It’ll make our lives easier. I’m 30 and I know a lot of people who went to New Year’s Eve parties. It’s exasperating.

The day ends in tears – those of a patient’s daughter who is crying to me down the phone. Her father died of Covid in early December and on the way to the funeral her mother had a stroke. She was admitted to hospital and released for rehab into a nursing home where she caught Covid herself. Now she will probably die too.

DO WE LET A WOMAN DIE ALL ALONE?

My first task is to find some PPE that fits. I spend ten minutes looking for a mask with a decent nose clip so my goggles don’t fog up.

We have what we call a ‘safety huddle’, a socially distanced meeting of our team – three doctors, one consultant and several nurses.

The news gets worse. We’re warned that staff shortages mean we might have to take on responsibility for another ward on the other side of the hospital, a good ten-minute walk away. It’s just not practical. 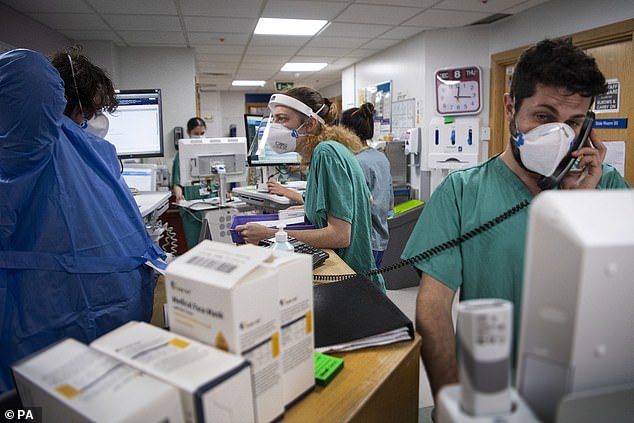 Mid-morning brings one of many tough decisions. A sweet lady in her 90s is in a critical condition. But is she dying or not? And should we invite the family to say goodbye to their mother? It’s a real ethical dilemma. We don’t want to risk infecting relatives needlessly.

In the end we decide they should wait. I feel uneasy, but there’s no time to dwell.

Today is even more stressful than normal because the ward consultant is isolating at home after a family member tested positive.

So another consultant comes to help. This one’s had Covid twice already but tells me that as soon as he gets home each day he strips off at the door, throws his clothes in the machine and gets straight in the shower because he’s so worried about infecting his children.

I haven’t had the vaccine yet, despite working on a Covid ward, and it makes my blood boil. I’ve made a huge personal sacrifice to be here. My mother is seriously ill and only a short time to live. Yet my job means I haven’t been able to see her in nine months.

I AM PLAYING GOD WITH PEOPLE’S LIVES

The next two weeks could break the NHS. The wards are simply full so another hospital across the city will take some of our patients but the problem is this: most of them would not survive the journey.

Once again I’m playing God with people’s lives – working out which ones won’t die en route.

Tensions bubble over and I vent at the matron: ‘Why didn’t we have a plan?!’

We knew this was coming. Couldn’t we have discharged more non-Covid patients to make room?

She says it’s not that simple. We had plenty of spare beds in the first wave but now, thanks to other illnesses circulating at this time of year, they’re occupied. 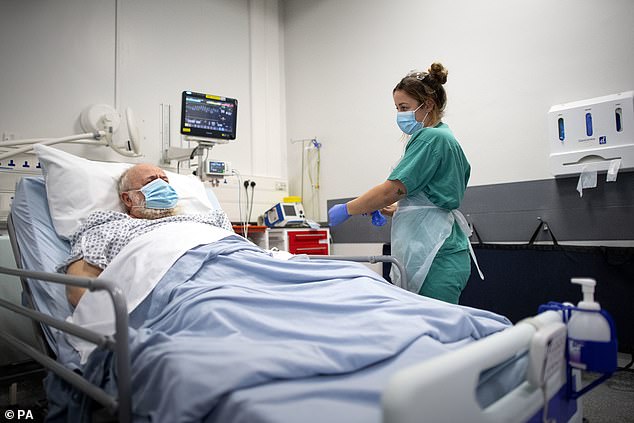 A new patient arrives on the ward with a severe head injury and a positive Covid test. Anyone who tests positive has to come to a Covid ward, regardless of other problems. Yet we don’t have his records. All we know is that he waited 45 minutes for emergency help thanks to the backlog in A&E and the queue of ambulances outside.

One patient died overnight and his room is being cleaned. So that’s one bed free – a terrible calculation but necessary. Another of my patients is refusing to eat or drink – a problem we often see with elderly Covid patients. The loss of taste and smell puts them off.

Today, I got my Covid vaccine thanks to a friendly GP. He rang me at the last minute and said he had one going spare. I leapt at the chance and he was able to fit me in after hours.

It’s a bit naughty but if a vaccine is going to go to waste then it’s up to the individual GP whom it goes to. He knew about my mum’s condition and called me right away. In ten days, the vaccine will be 90 per cent effective. That’s pretty good. I’m relieved.

I CAN’T DO MORE – I’M AT BREAKING POINT

My hands are already dry and cracked from all the washing. Today they start to bleed. There has been no hand cream on the ward for two weeks now.

Things have got dramatically worse. Nine patients I’m responsible for were moved out of the ward by a manager at night to make way for new cases – without our agreement. I don’t know where they went and I don’t have time to find out. It’s hard because I spoke to their relatives on the phone yesterday and assured them I’d ring them again today to update them. That won’t happen now, and even though it’s not my fault, I feel guilty.

And the new people on the ward are even sicker.

There’s a 70-year-old who tells me that he cycles 20 miles every week. I’m concerned with what I see but try not to show it. His oxygen levels are dropping rapidly. We see this a lot with Covid patients: they seem to be fine but then fall off a cliff. He’s sitting up and talking. I suspect he’ll be in intensive care by tomorrow.

At least it’s the beast we know this time and now there are treatments that work, such as the steroid dexamethasone.

A 40-year-old pregnant woman has arrived. She has a sky-high temperature and is coughing. On top of that, we fear she may have a blood clot on the lung and we need to do a scan to check. I try to explain it could cause some radiation to her baby. She doesn’t speak English and looks at us blankly so we proceed. It turns out there’s no clot, just serious Covid. But because of her age we think she’ll be OK.

I get home and collapse on the sofa, barely able to speak to my partner. As I scroll mindlessly on my phone, an email comes in from the consultant who looks after the rota. It’s an urgent plea for cover. ‘Another Covid s***storm,’ he writes. ‘Please text me if you can help.’

But I can’t take on any more. I was nearly at breaking point today. There was so much to do that it started to feel unsafe.

I know tomorrow will be worse.

I barely slept last night from worry. That’s the second night in a row I’ve woken up at 4am, then tossed and turned until dawn. The pressure is starting to get to me. My only goal this week has been to get through it all, but there’s only so long you can live life that way.

I love my job but I’m completely exhausted. Everyone is – their nerves are fraying.

One nurse tells me she goes home every night and cries. Some lower-paid staff have simply quit. A doctor friend in London has post-traumatic stress from the first wave and can’t work this time round.

We’re used to seeing people die, but not so many, so routinely.

Pre-Covid, I might have seen two or three deaths a week. Now it’s four or five a day.

Then there’s the physical toll – it’s shattering – the mounting chaos in the background and, of course, the lingering worry that this thing might mutate again and again.

When I got into work, I found the 70-year-old cyclist had been rushed to intensive care overnight. He seemed fine yesterday – to the untrained eye.

I’m sorry to say that the frail 90-year-old whose family we discussed on Tuesday has now reached the end. We have made her comfortable but there is nothing else we can do. Her two sons, both in their 60s, were allowed to say goodbye, both dressed in full PPE. Their mother didn’t recognise them.

We’re starting to see the Christmas aftermath. We have a new patient who says she told her family not to visit but they ignored her and came anyway.

She caught Covid, and now it is very likely she will die. We’re seeing a lot of that.

I find out some NHS staff working from home have been vaccinated before us on the front line. The ineptitude makes me blood boil.

The whole week has been a blur. But I know the weekend will be plagued with worries about whether I made the right choices, whether I could have done things differently.

I don’t know how much longer we can keep up with this excruciating pressure.

Please – instead of going out, just watch a box set, do a home workout or read a book.

So many people are dying and it’s making our job feel impossible.