There is no rulebook for the perfect marriage – and even if there was, some celebrity couples are proving that they are more than happy to throw it right out of the window, along with a lot of other wedded traditions, including sharing the same marital home.

One such couple is Kourtney Kardashian and her new husband Travis Barker, with the reality star revealing in a recent interview that the pair still don’t live in the same house – and that she often co-sleeps with her 10-year-old daughter Penelope, instead of with her partner.

But as it turns out, Kourtney, 43, and her rocker beau, 46, are one of many A-list pairings who have chosen to live separately, with several other celebrity couples coming out to share their own similarly unique living situations over the years.

Gwyneth Paltrow – who defied convention when she announced that she was ‘consciously uncoupling’ from her first husband Chris Martin – once again bucked tradition when she revealed in June 2019 that she had her second husband, Brad Falchuk, retained their separate residences and lived apart for the first year of their marriage to ‘preserve mystery’.

It appears the quirky convention proved successful because the couple are still going strong several years later – and have since ‘merged’ their lives and their homes.

Keeping things separate: Even though Kourtney Kardashian and Travis Barker have been married since May 2022, the two live in separate homes and Kourtney still co-sleeps with her 10-year-old daughter, Penelope 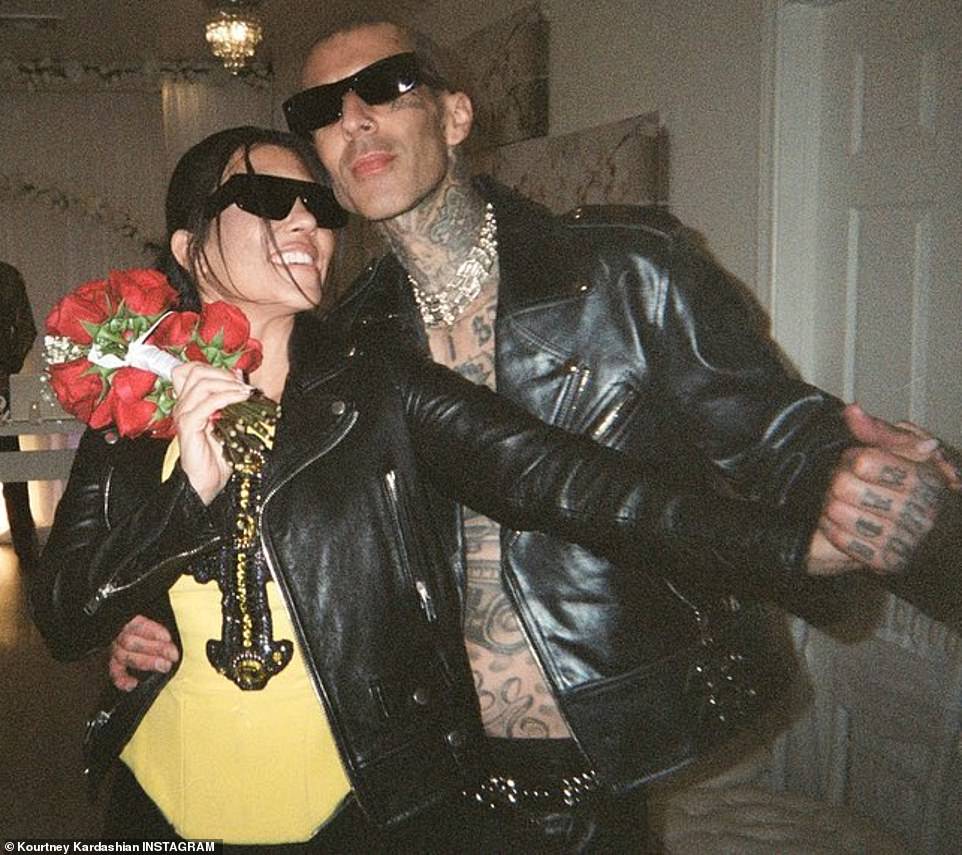 ‘We want our kids to also feel really comfortable and they have both lived in their homes their whole lives for the most part,’ Kourtney says of their decision to live in separate homes

However, choosing to maintain separate living spaces hasn’t worked for everyone.

Kaley Cuoco and her ex-husband Karl Cook followed a similar pattern to Gwyneth and Brad, spending more than a year after their 2018 marriage in separate homes, before eventually moving in together in 2020.

Ultimately, that may well have been an error because the pair split one year later.

However Kourtney insisted during a recent interview that her and Travis’ set-up has been working like a charm – particularly for their respective children, whom they wanted to be able to keep living in their own homes.

Kourtney has daughter Penelope, 10, and sons Mason, 12, and Reign, seven, with her former partner Scott Disick, while Travis welcomed a son named Landon, 18, and a daughter named Alabama, 16, with ex-wife Shanna Moakler.

‘We want our kids to also feel really comfortable and they have both lived in their homes their whole lives for the most part,’ she told Dear Media’s Not Skinny, Not Fat podcast, also noting that they aren’t living particularly far apart – because their homes are located just across the street from each other.

While they each have their own reasons, DailyMail.com reveals the other famous couples who opted to live separately – and their reasons why, from work obligations to issues over loud snoring. 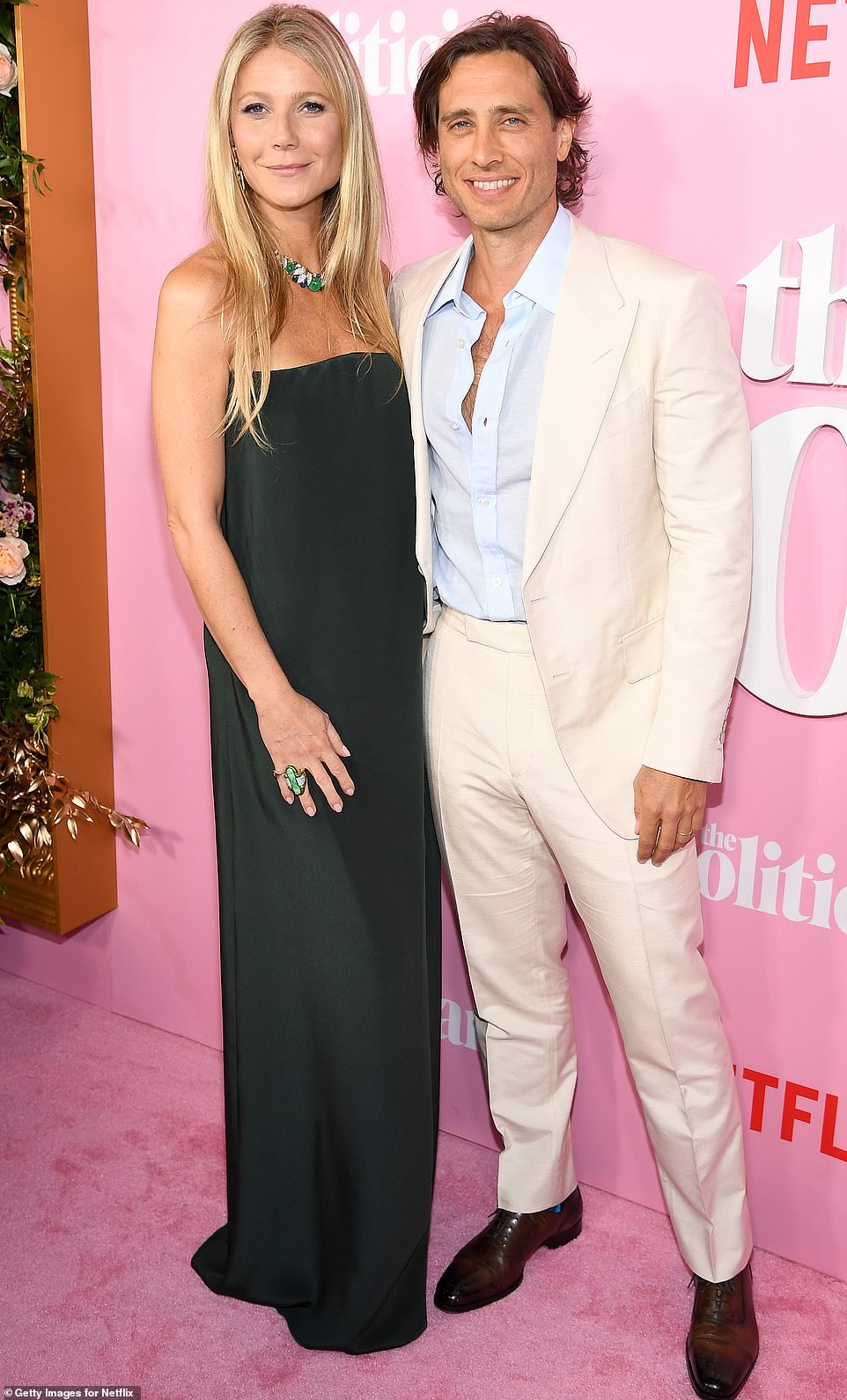 Gwyneth Paltrow, 50, and Brad Falchuk, 51, spent the first year of their marriage living in separate homes – even though they had been together for some time before they had tied the knot.

The two had met in 2010 and began dating in 2014 when Gwyneth appeared in a guest spot on Glee, which Brad had worked on as a producer.

Brad popped the question in 2017 and they tied the knot a year later in 2018. They would spend the next year living separately, a decision Gwyneth doesn’t seem to regret. 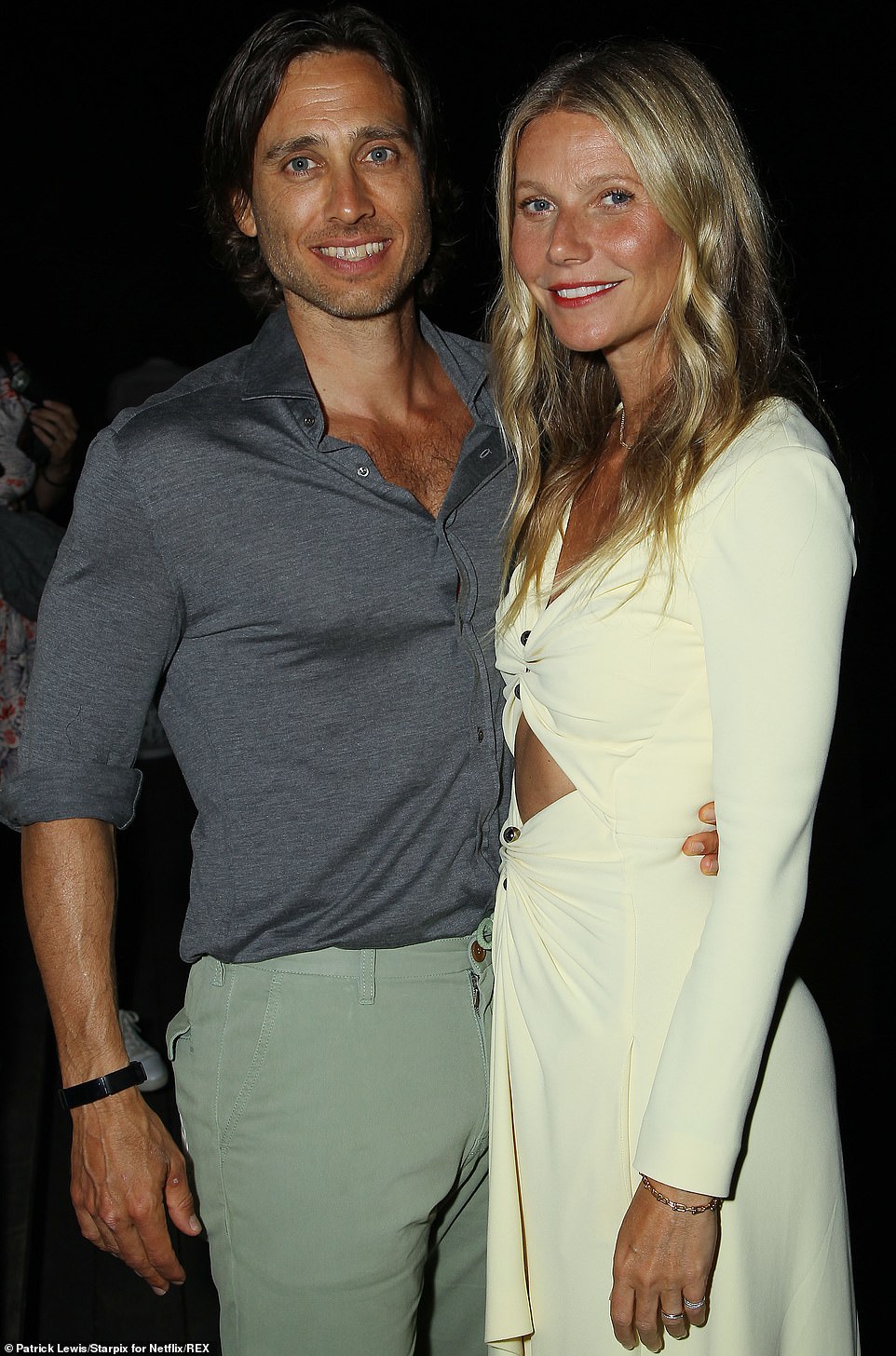 ‘I think it certainly helps with preserving mystery and also preserving the idea that this person has their own life,’ Gwyneth said of living separately from Brad 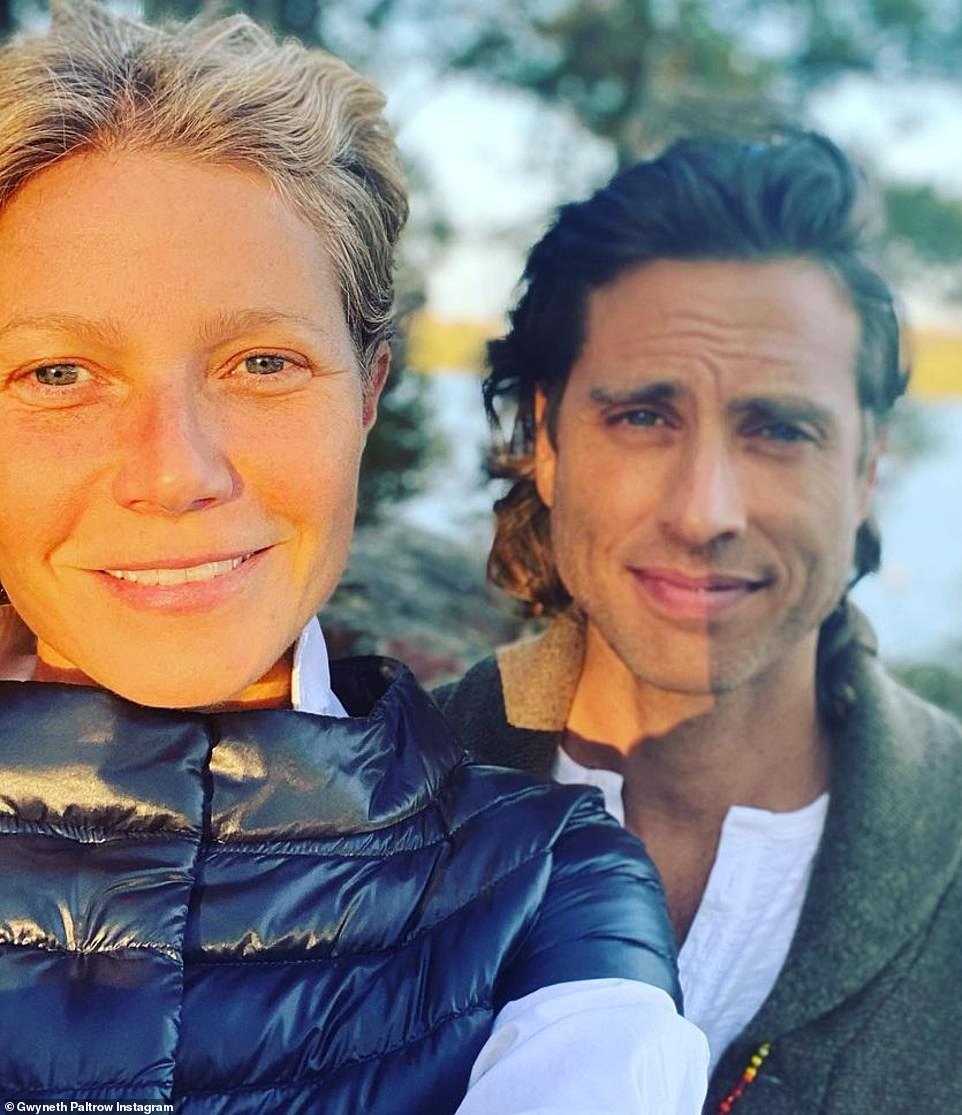 They ended up moving in together in 2019 and she joked, ‘so our sex life is over’ a year later

‘One of my best friends was like, “That is my dream. Don’t ever move in,”‘ she joked to Harper’s Bazaar of reflecting on their once-unconventional living situation.

‘I think it certainly helps with preserving mystery and also preserving the idea that this person has their own life,’ she added.

They ended up moving in together in 2019 and in the 2020 Harper’s Bazaar interview, she joked, ‘so our sex life is over.’

Despite the challenges of living together with their kids, especially during the 2020 coronavirus pandemic, they still seem to be going strong. 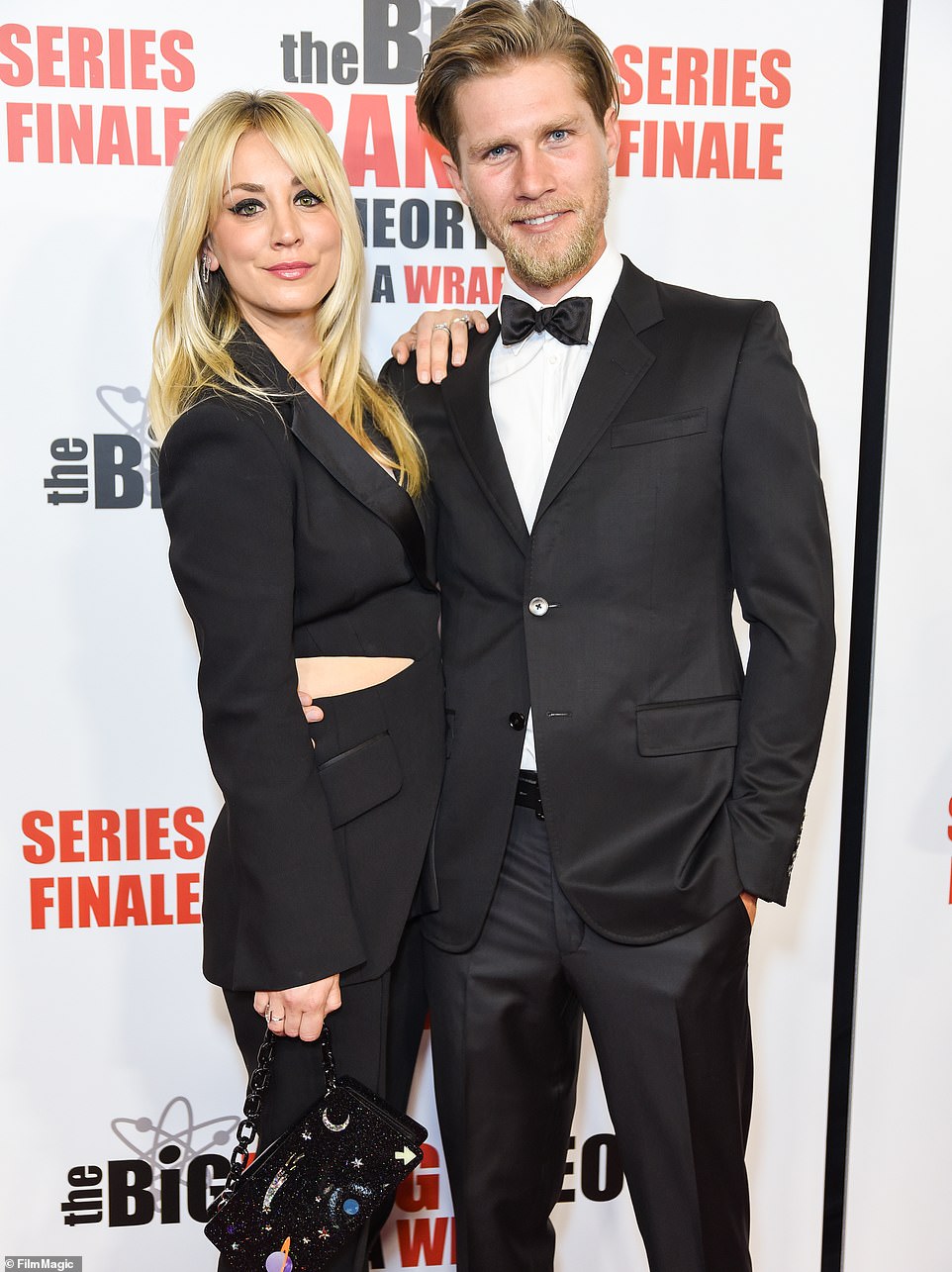 Kaley Cuoco and Karl Cook lived separately for over a year in 2019 after they tied the knot and even though they ended up moving in, they ultimately split in 2021

The equestrian duo two had met at a horse meet in 2016 and tied the knot two years later in June 2018.

In August 2019, Kaley confessed that the two weren’t living together.

‘We have a very unconventional marriage,’ she told E News! ‘We have different locations that we’re at a lot.’

She added: ‘We’re not together every single day, and I think personally it’s important, it works well for us.’ 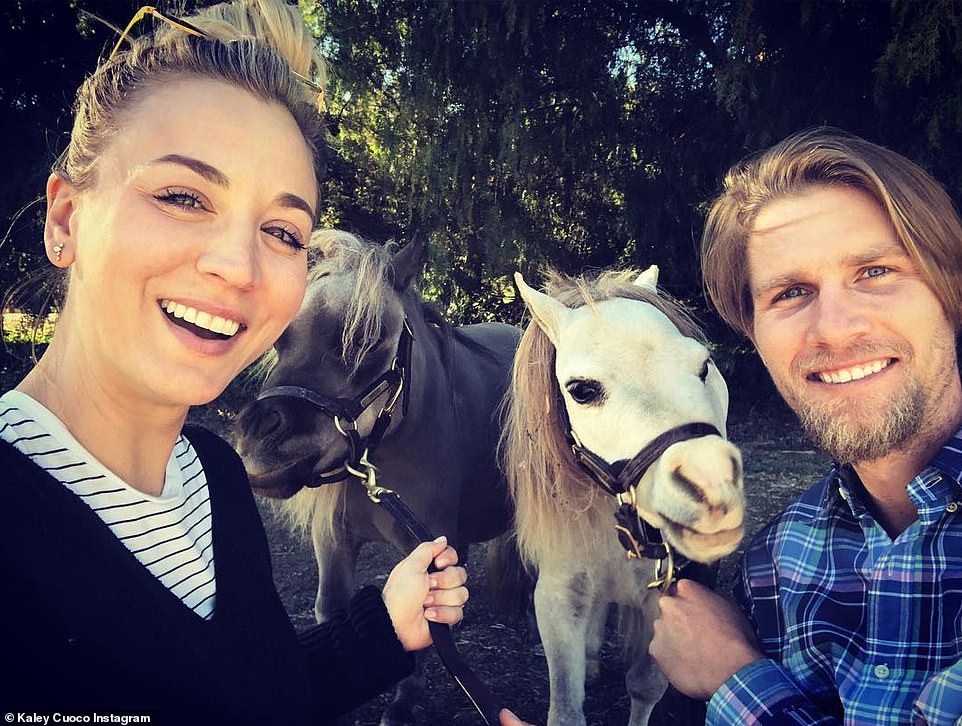 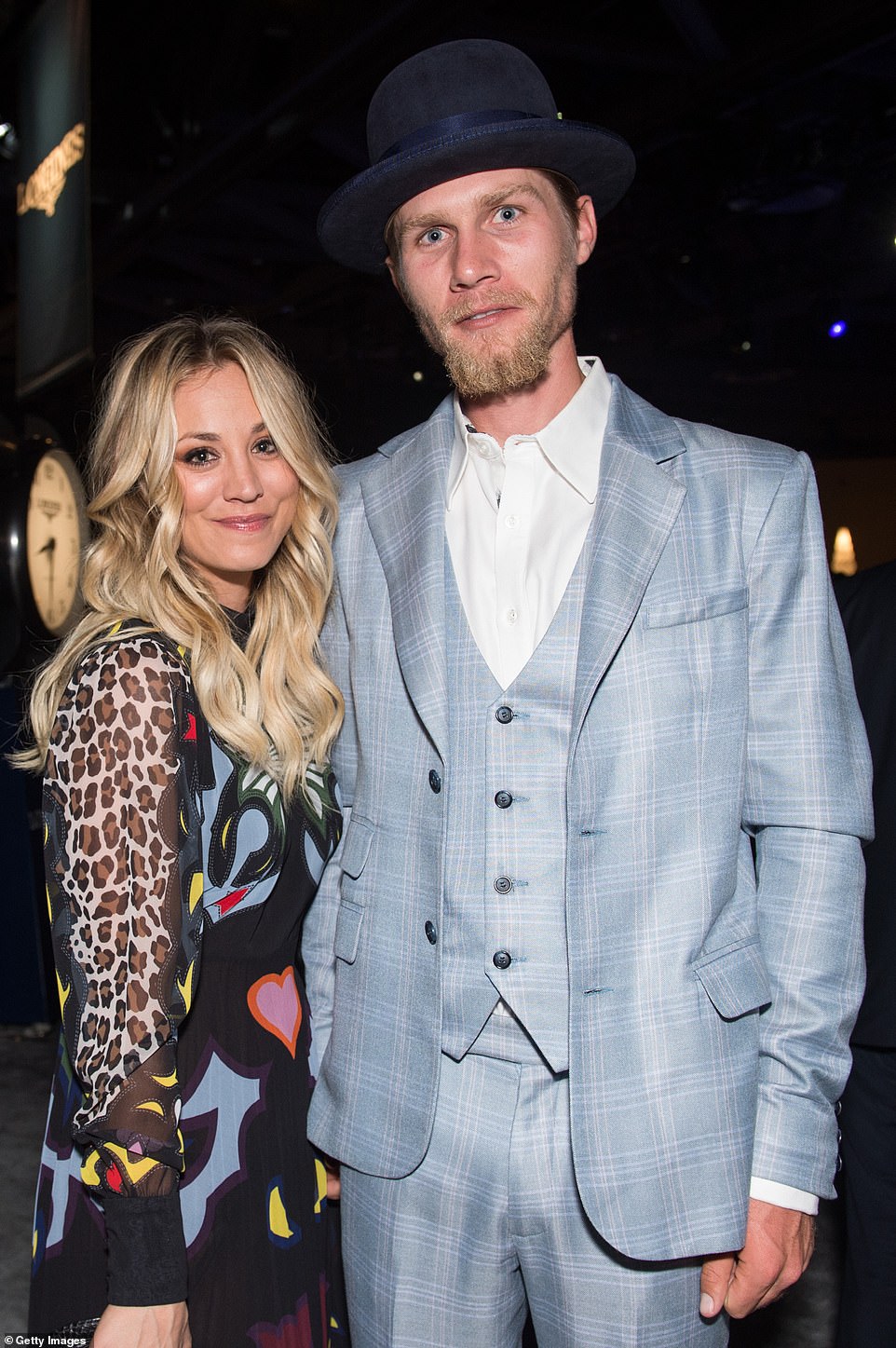 Even though living separately was working out for the pair, they did intend to take that next step of moving in together.

‘We’re building our dream house,’ she explained. ‘We’re eventually gonna be under the same roof forever.’

They eventually met that goal and moved in together in March 2020 and the next month, she had boasted that it was ‘great for our relationship’ on Jimmy Kimmel Live!

However, by September 2021, the two announced that they would be divorcing. 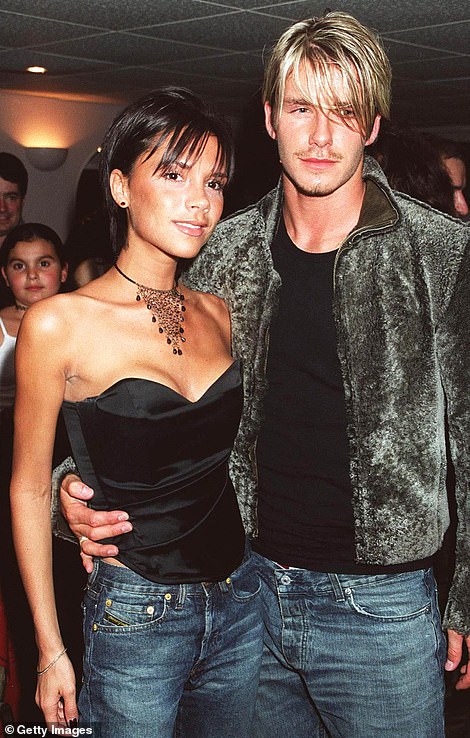 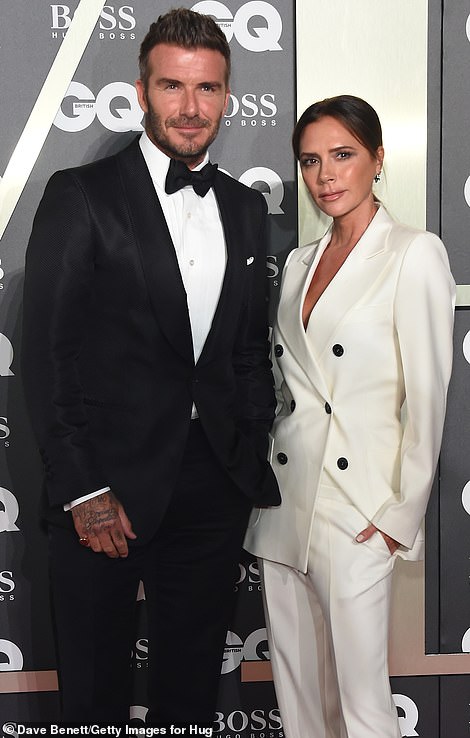 Victoria and David Beckham reportedly moved into separate his and hers wings of their mansion in 2018, 19 years into their marriage

Victoria, 48, and David, 47, Beckham’s relationship has stood the test of time – and that could be due to the fact that they partially live apart.

The Beckhams, who’ve been married for 23 years since 1999 and share four kids, have lived all over the world from Spain to LA.

However, when they moved back to the UK following David’s retirement in 2018, they decided to get a house with separate ‘his and hers wings,’ a source told Us Weekly at the time.

Divorce rumors were swirling around the couple at the time, but the source iterated that separating their lives more seemed to be helping their marriage.

‘I think they quite like having somewhat separate lives. When you’ve been married that long, some regular distance does you both good!’ a source told the publication of the Beckhams’ living situation.

The two are still happily married to this day. 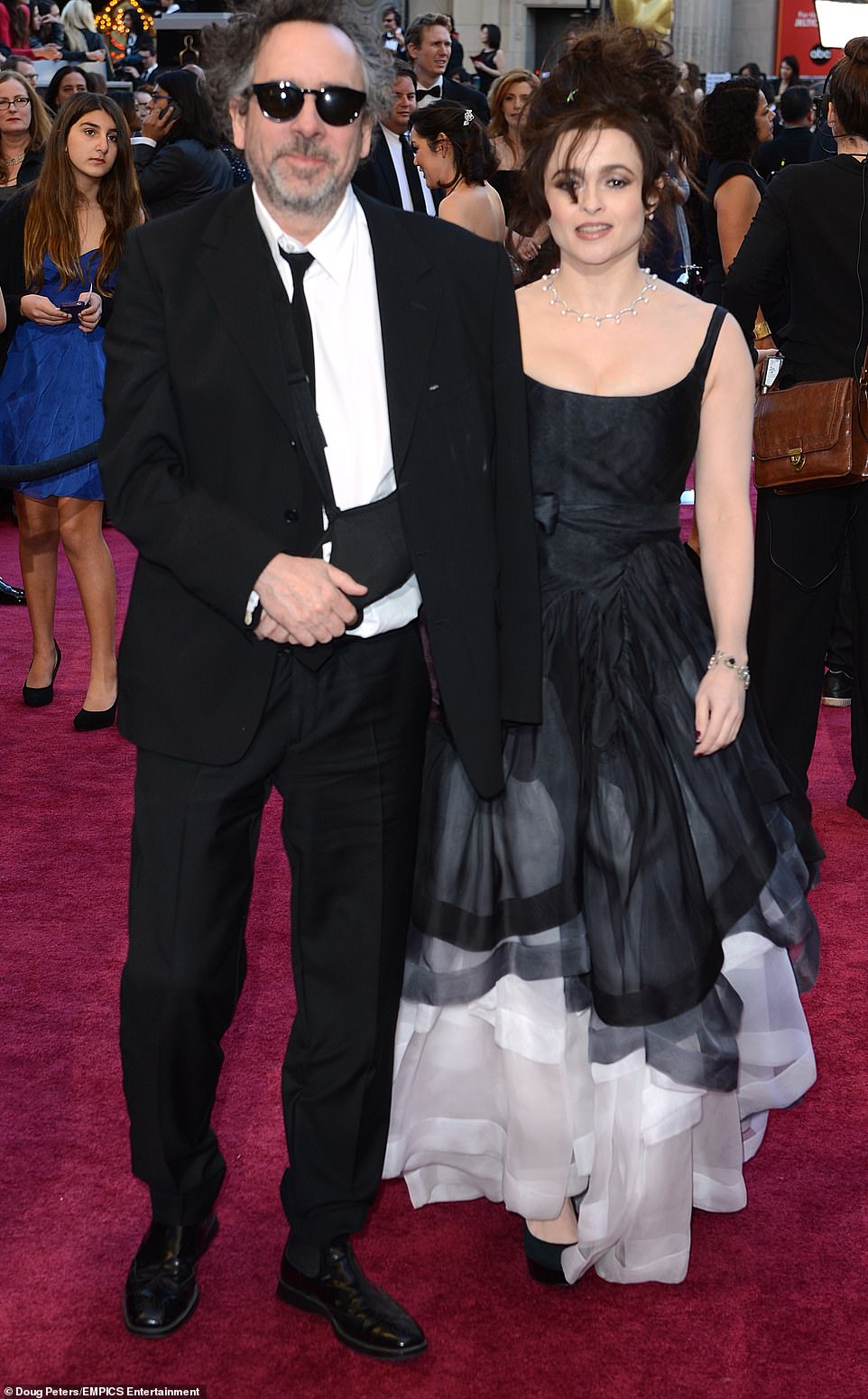 During their 13-year relationship, the pair lived in two separate homes that were joined together because Helena struggled with falling asleep due to Tim’s snoring

Helena Bonham Carter, 56, and Tim Burton, 64, had opted with a somewhat similar layout to the Beckhams.

Even though the two never officially tied the knot, they dated for 13 years after they met on the set of Planet of the Apes in 2001 and had two kids together.

The reason Helena wanted to sleep in a separate accommodation is an issue many can relate to. The actress struggled with insomnia because of Tim’s snoring.

The two ultimately decided to buy two separate homes and join them together. 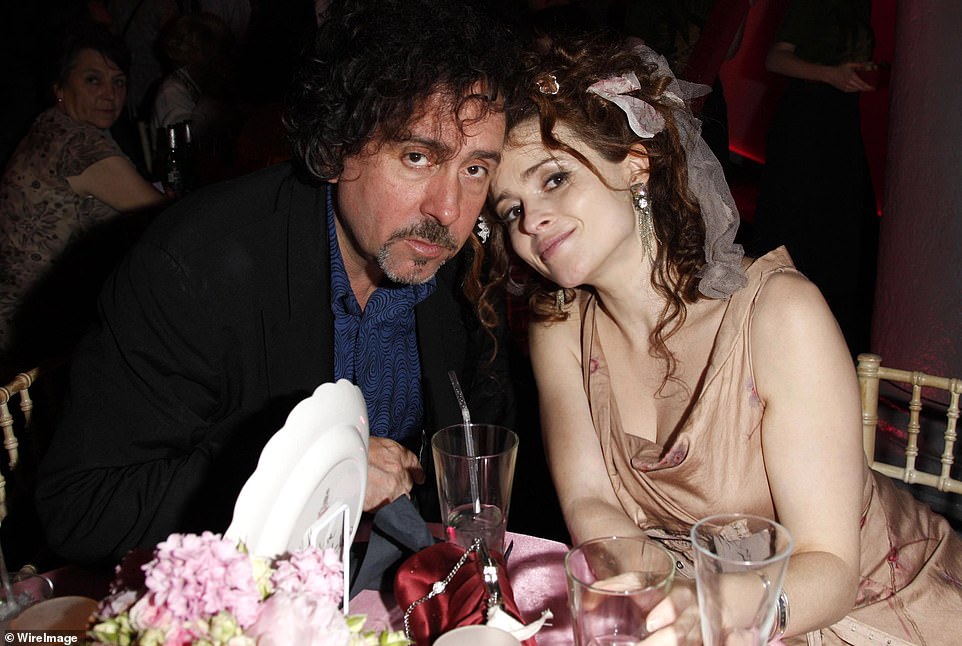 Helena and Tim dated for 13 years after they met on the set of Planet of the Apes in 2001 and had two kids together. 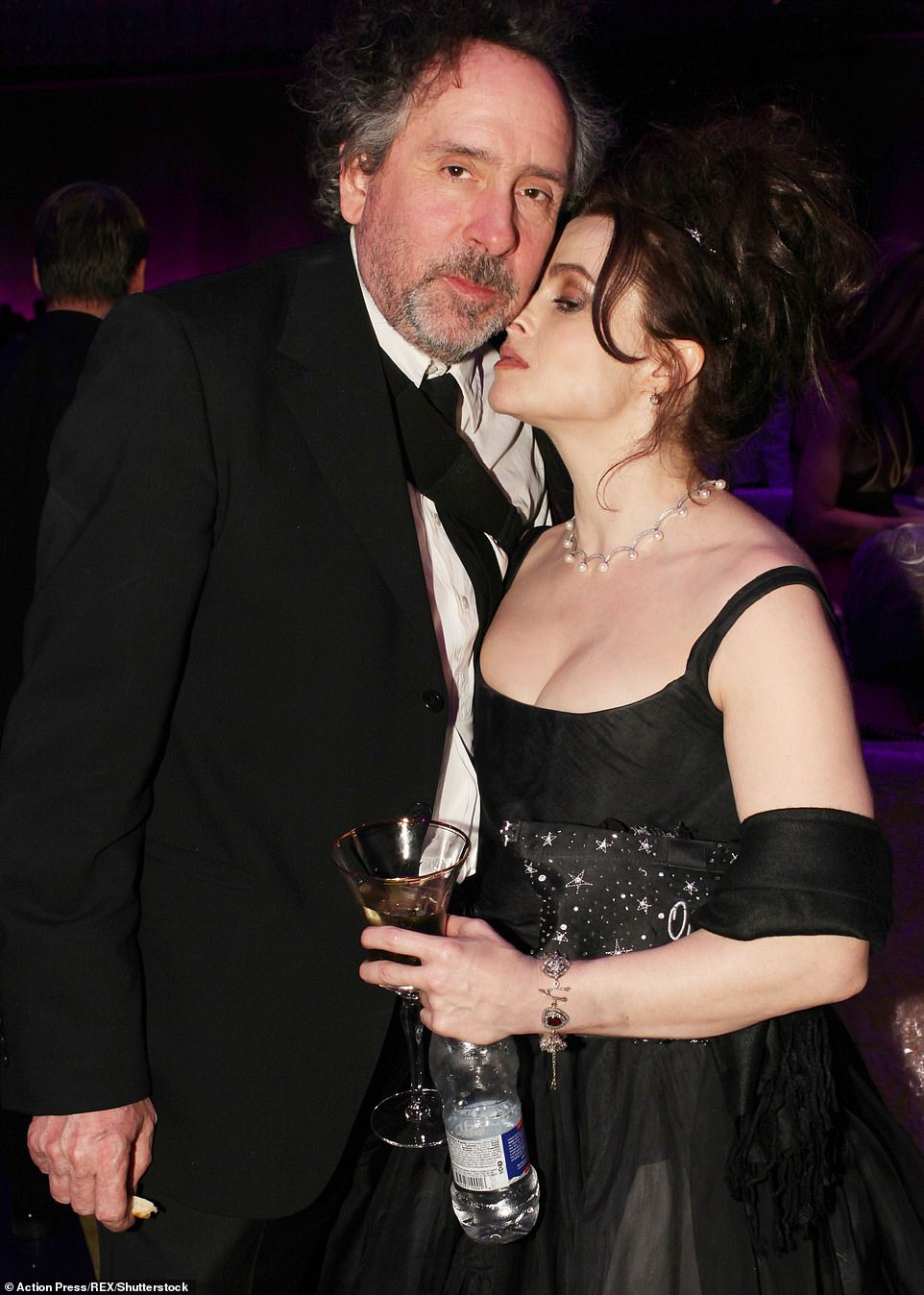 ‘We see as much of each other as any couple, but our relationship is enhanced by knowing we have our personal space to retreat to,’ she allegedly told Radio Times in 2010.

‘It’s not enforced intimacy. It’s chosen, which is quite flattering—if you can afford it.’

The two also used it as an opportunity to express their creativity and decorated each of their places to their own unique taste.

Unfortunately, the two ended their 13-year relationship in 2014. 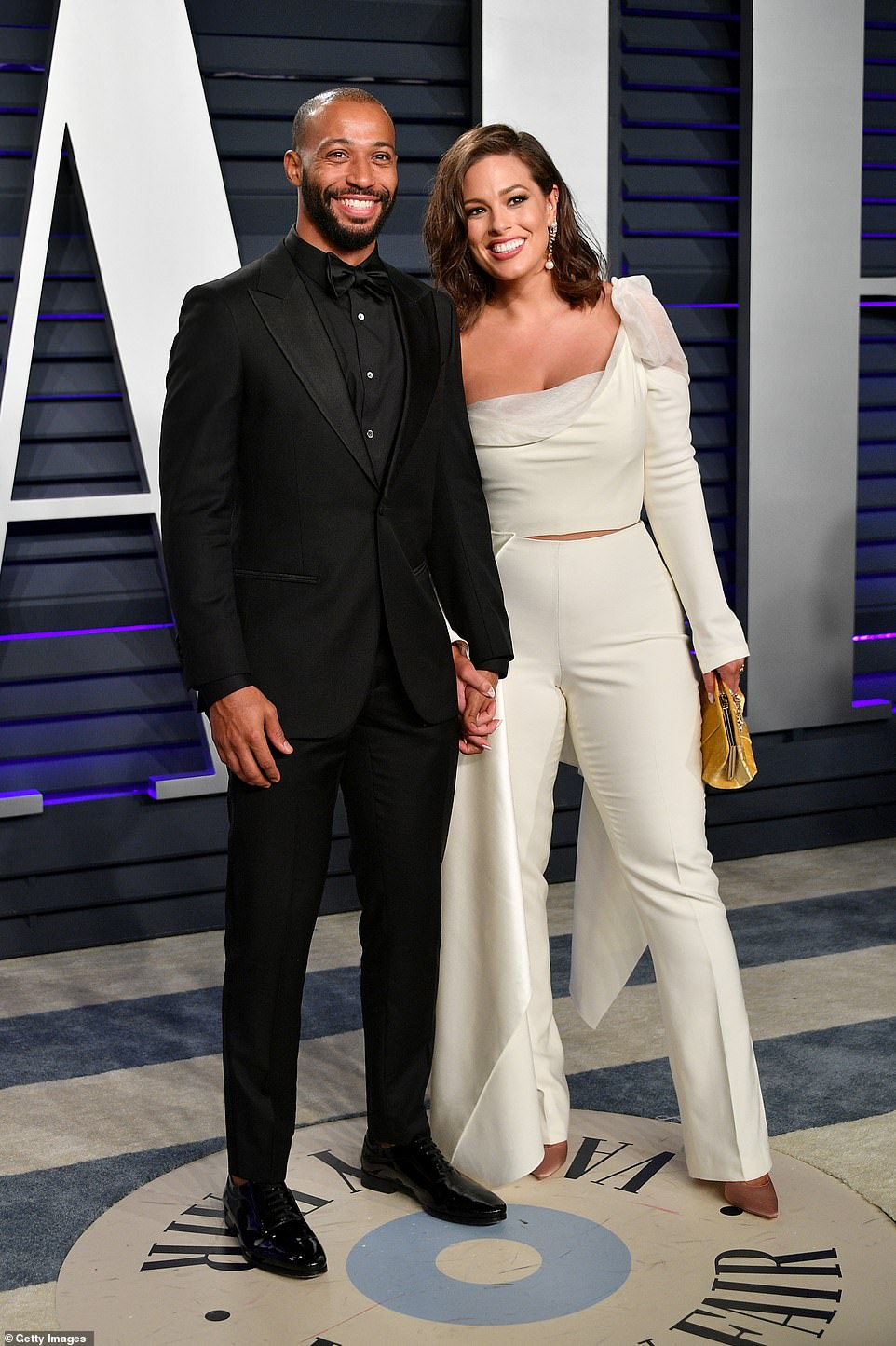 Ashley Graham and Justin Ervin always proved they did things their own way from the very start of their relationship.

The two started dating in 2009 and decided that they’d abstain from sex until they got married and started their relationship off without staying over each others’ place.

‘Because we weren’t sleeping together — for Justin, abstinence was a firm commitment to his faith — we never tempted ourselves by going over to each other’s apartments late at night,’ she detailed in her memoir, A New Model: What Confidence, Beauty, and Power Really Look Like.

They got married a year after dating in 2010 but it seems that didn’t stop them from living separately.

Ashley revealed in 2016 that the two were living in separate cities with Ashley residing in NYC while Justin lived in LA.

‘We have a rule. We don’t go longer than two weeks without seeing each other,’ she told ET at the time. ‘It’s absolutely fabulous. I love it. We just meet in L.A. or New York. We meet in Paris, Miami. It’s pretty sexy.’

While it’s unclear whether the two live together now, it’s unlikely that they’re still maintaining a long-distance marriage since they share three boys under three years old.