EXPRESS INFORMER > Business & Finances > As a sell-off rocks the US giants, is this the end of easy-money Big Tech?

As a sell-off rocks the US giants, is this the end of easy-money Big Tech or will artificial realm of Metaverse be place to make money any time soon, or ever?

By Anne Ashworth For The Daily Mail

Will thee Metaverse be the place to make money any time soon, or ever?

That’s the question investors have been asking this week as the outlook for US tech giants betting on this, or any other form of life-changing innovation, suddenly seems much less bright.

For the moment at least, Wall Street appears disenchanted with the global ‘disrupter’ tech businesses in Silicon Valley or Seattle. In the past few days, traders have sold shares in Meta – owner of Facebook, Instagram and WhatsApp and a leading member in the movement that believes the Metaverse is ‘fundamental to the future’.

Meta is under pressure over its $69billion gamble on this virtual reality sphere – and its ability to counter the threat to Instagram from the TikTok video app. As Chris Ford, head of growth equities at Sanlam investments, points out, not only is TikTok the world’s largest social media platform – it is also owned by the Chinese.

As Ford highlights, the perception that America is the only innovation centre worth backing may be shifting.

At the start of this year, Meta’s market value was almost $1trillion. Now it has fallen close to $263billion, with the result that Mark Zuckerberg, Meta’s boss and largest shareholder, is rather less rich than before.

Many UK investors have also become worse off. They include not only those in technology funds and trusts, but also investors with savings in some general funds.

The apprehension over Meta’s strategy has highlighted the faltering profits of other tech titans.

Shares in Google’s owner Alphabet are down by 35 per cent this year. Apple shares have suffered less but, as this column has reported, the iPhone maker is now considered to be more of a luxury goods business.

This may be some consolation to those with money in the F&C trust, where Apple is the third largest holding and Microsoft is the largest. Microsoft shares, which have fallen by 33 per cent since January, are also owned by Fundsmith, another highly popular fund. So should Wall Street’s new aversion to tech be a signal for UK investors to end their relationship with these US names? Tech stocks flourished  in part due to the low interest rate, easy-money environment now changing rapidly.

Jason Hollands of Bestinvest is cautious.

‘We are in a very different environment. The easy money days of quantitative easing boosted these shares. ‘We are not going to be going back there any time soon.’

If you can afford to do so, you may be minded to sit tight and wait for some relaxation in the current economic and geopolitical turmoil, sharing the view of Ford, who contends that this week’s rout was an over-reaction. He believes while adulation for tech firms and their disruptive power in the pandemic may have been overdone, current pessimism is misplaced given that the potential for artificial intelligence (Ai) is yet to be fully recognised.

AI will be a key emphasis at Alphabet and Microsoft. They are engaged in what Ford describes as the more ‘prosaic parts of the Metaverse’, using it as a means of sharing manufacturing designs, for example, rather than as a place for avatars to socialise. if you have savings in a technology fund, 90 per cent of this is likely to be invested in the US, meaning that you may not be exposed to innovations hatched elsewhere. China may already have pulled ahead of the US but this is being overshadowed by sanctions on its manufacturers. 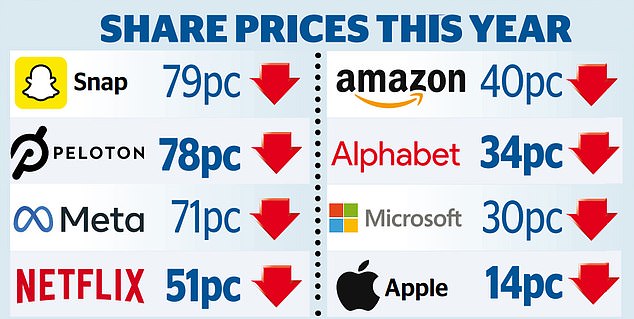 These considerations should be a signal to anyone who wants to participate in the rewards of innovation to cast their net widely.

The Augmentum trust, for example, invests in fintech firms that are supporting the digital transition of traditional banks.

This trust, standing at a 41 per cent discount to the net value of its assets after recent ravages in the sector, is a bet on UK plc. As manager Tim Levene says, 17 of the 24 holdings are British players in a global market that could be worth $12trillion in a few years’ time.

I will remain an investor in F&C, Fundsmith and in the Scottish Mortgage trust, which has a slice of TikTok owner ByteDance.

Despite my love of a bargain, i do not intend to follow the advice of the AllianceBernstein brokerage to plug my nose and buy Meta, as it seems the disrupter has already been disrupted.