That he managed to make it to the age of 82 is nothing short of a minor miracle.

To get that perfect shot, photographer Peter Beard swam in crocodile-filled rivers, stood before a charging lion and survived being gored by an enraged elephant that snapped his ribs and crushed his pelvis.

By the time he got to hospital he had lost so much blood doctors couldn’t find a pulse.

But his death-defying pictures of African wildlife were matched by a passion for the model-infested demi-monde of nightclubs, friendships with some of the most famous people on the planet, and a decadent life of drug-taking excess.

Yesterday it was announced that the itinerant playboy who discovered one supermodel, David Bowie’s wife Iman on the streets of Nairobi, and married another, Cheryl Tiegs when she was then the world’s highest paid cover girl, had been found dead three weeks after disappearing from his home in Long Island.

Peter Beard and Claudia Schiffer attend the Peter Beard Birthday Party at the VIP Room Club in Paris, France, in 2008

But there was consolation for the family of the man who caroused with the Rolling Stones, got stoned with Andy Warhol and was painted by Francis Bacon 30 times, that his body was found in woodland.

‘He died where he lived: in nature,’ they said simply.

His twilight years were marked by dementia and at least one stroke but Peter Beard, famously described by Warhol’s biographer as ‘half Tarzan, half Byron,’ was more than just a socialite conservationist even though he liked to describe himself as the last defender of a collapsing natural order.

In terms of his social connections and staggeringly sexy pictures of women, Beard was New York’s answer to Lord (Patrick) Lichfield, the Old Harrovian and cousin of the Queen who captured so much of the glamour of the Swinging Sixties in London.

But while Beard’s pictures of models are celebrated, his legacy was his first and best-known book, The End of The Game published in 1965 when he was just 27 and full of youthful anger at what he saw as the desecration of a continent.

In words and pictures it documented not only the vanishing romance of Africa but the tragedy of its imperilled big game, particularly the elephant.

It was part celebration and part obituary for the era of the white man’s hunting in Africa, the adventurers who loved it but who also brought about the seeds of its destruction.

But while the book was to make him an international cult figure, he was to become just as famous for his erratic and highly publicised romantic life.

He photographed some of the world’s most beautiful women in shoots for Vogue, Elle and other fashion magazines, often incorporating them with his wildlife obsession.

His 1976 picture of the model Magritte Ramme posing naked with the world’s biggest bull elephant tusk was one of his most iconic images.

And with his matinee idol good looks there were romances with many of them too, including Candice Bergen, Carole Bouquet and, it is rumoured, Lauren Hutton. 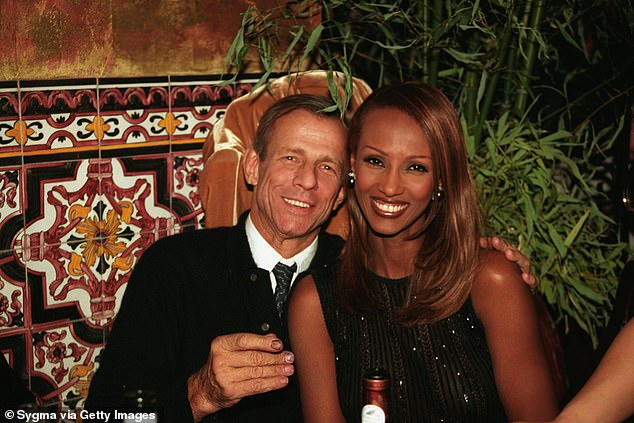 Peter Beard discovered one supermodel, David Bowie’s wife Iman on the streets of Nairobi (the two of them pictured together)

His most well-known affair was with Lee Radziwill, the sister of Jacqueline Onassis. Through her he became friends with her sister and spent a summer with Jackie and Aristotle Onassis on the shipping tycoon’s Aegean island Skorpios where he took a celebrated picture of Jackie photographing him.

He won $2,000 when Onassis bet him he couldn’t hold his breath underwater for four minutes — Jackie clocked him at 4 minutes 20 seconds.

Beard also used to babysit for Jackie’s children Caroline, whom he taught how to hold a camera, and John.

But no sooner had his lover Lee secured a divorce from her second husband Polish prince Stanislaw Radziwill in order to be free to marry Beard, she discovered the photographer had embarked on an affair with model Barbara de Kwiatkowski causing a social scandal.

When not in the wilds he was hanging out in the nightclub Studio 54 in New York at the height of its disco-era heyday.

He was friends with Bacon, Warhol, Truman Capote, Salvador Dali, Grace Jones and Bianca Jagger. He partied with the Stones and photographed them too.

‘Mick arrived so drunk from an afternoon with Peter Beard and Francis Bacon that he fell asleep on my bed,’ wrote Warhol in a diary entry from the 1970s.

For his 40th birthday, Studio 54 arranged for a giant elephant shaped cake to descend from the ceiling.

His womanising was as legendary as it was indefatigable, and well into old age was a regular subject of the gossip columns.

At almost 60, Vanity Fair reported how after roistering in a Nairobi nightclub until 5am, he emerged from a tent on his ranch in Kenya — where he kept a home for 40 years — followed by ‘four or five’ nubile young Ethiopian women he had brought home with him.

‘The last thing left in nature is the beauty of women,’ he offered in explanation.

And as recently as 2013, the New York Post reported that Beard, then 75, had returned to the Manhattan home he shared with his third wife with two Russian prostitutes in tow.

The marriage survived — unlike his union to Cheryl Tiegs which broke up after just 11 months.

She was the world’s highest paid model, earning £1,000 a day when they met.

He whisked her to Kenya where passion blossomed under the hot African sky.

For a short while they were the most glamorous of jet-set couples.

Much as he adored women, and the more beautiful the better, his main love was for Africa and its sheer vastness. 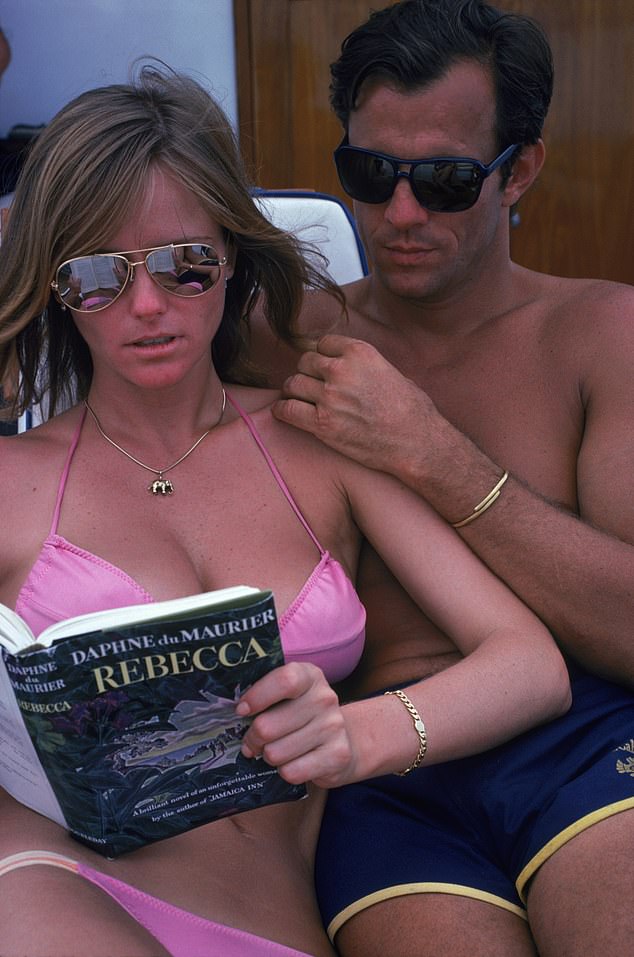 He had made his first visit there at 17 in 1955 in the company of Quentin Keynes, a great grandson of the naturalist Charles Darwin.

Despite being chased up a tree by an angry hippopotamus, he was smitten and became inspired by the beauty of Danish writer Karen Blixen’s Out of Africa, her 1937 cult novel about a lost Kenyan world in which man co-existed with untamed nature.

This was not what his well to do patrician New York family had in mind for their son.

He was one of three brothers who were heirs to a railroads fortune on their mother’s side and a tobacco inheritance on their father’s.

After graduating from Yale he followed his parents’ wishes and signed on as a trainee at the advertising agency J Walter Thompson but he didn’t last long and in 1961, with the security of a family trust fund, he travelled to Denmark to track down the elderly Blixen.

He charmed her so much that when she died a year later she left him her photographic archives.

Determined to continue where she left off, he bought 45 acres next to her former Kenyan coffee farm, christening it Hog Farm in homage to the warthogs who ran around his tent and set about establishing a one-man hedonistic Happy Valley set where he could take drugs to his heart’s content. 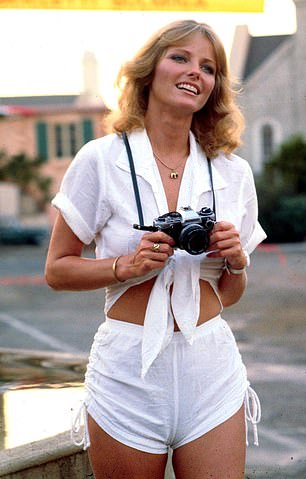 He had a brief marriage to heiress Minnie Cushing but they were divorced by 1970.

Hog Ranch was soon welcoming some of the most gilded and richest celebrities on the planet.

The Kennedys and the Rockefellers, the DuPonts and the Mellons all dropped by and all the time Beard’s reputation as a brilliant photographer was growing.

Inevitably the fashion industry discovered him, while he discovered new models for it.

Most notably the Somali-born supermodel Iman.

For Beard it wasn’t enough to bring this staggeringly beautiful woman to America, he also had to curate a story about her.

He told New York she was his barefoot Nefertiti, who didn’t speak English and who he found herding goats in the bush.

In fact Iman was the daughter of a diplomat, fluent in English, Italian and Arabic, and studying at university.

‘He said that I was some kind of shepherdess in the jungle,’ Iman said years later. ‘I never saw a jungle in my life.’

She and Beard never had an affair and the model who became an international success, resigned herself with an amused exasperation to his nostalgia for an Africa of the past.

His best known shots seem to have been taken from inside the jaws of a charging lion or the tip of angry elephant’s tusk.

Beard’s last marriage was to Nejma, the daughter of an Afghan diplomat and mother of his only child Zara.

At one stage it looked as if it too would end in divorce after his wife accused him of molesting their daughter.

But they were reconciled after that charging elephant almost ended his career and his life.

He will undoubtedly be remembered for his brilliance behind the camera — but also as one of the world’s most reckless handsome playboys.