EXPRESS INFORMER > News & Politics > Artist Damien Hirst is selling cherry blossom prints for £2,000 (and you can pay by Bitcoin)

A blooming bargain! Artist Damien Hirst is selling cherry blossom prints for £2,000 (and you can even pay for them by Bitcoin)

His best-known works of sharks in formaldehyde and skulls encrusted with diamonds were only ever destined for art galleries or the vast homes of wealthy collectors.

But Damien Hirst appears to be targeting his latest pieces at a more domestic audience – both in their less shocking appearance and their price.

The artist, 55, is selling a series of limited edition prints of the series of eight paintings of cherry blossom for just £2,100 a pop.

Damien Hirst, aged 55, is selling the limited edition prints for just £2,100 a pop

And for the first time he is accepting digital currencies Bitcoin and Ether as payment.

The one-time enfant terrible of British art – whose 2007 work For The Love of God featured a platinum cast of a human skull encrusted with 8,601 diamonds which cost £14million to make – created his latest series while in lockdown at his studio.

The oils on canvas are entitled The Virtues after the Bushido code of the Japanese samurai. 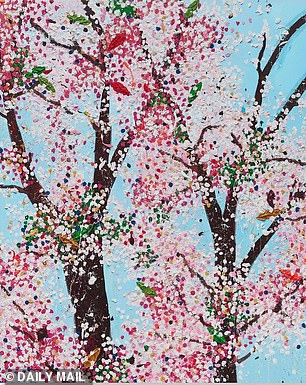 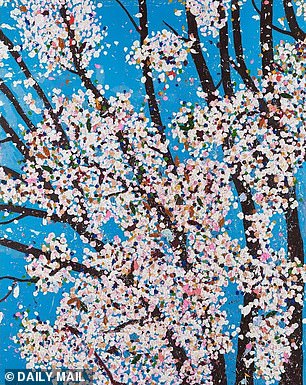 Hirst, who has teamed up with printmaker Heni Leviathan for the project, said he was ‘proud to put my belief’ into the digital currencies, adding in an Instagram post: ‘It’s hard for any of us to trust anything in this life but somehow we manage it… it’s a beautiful world!’

The prints will be numbered and signed by Hirst and will be available for only a week. For those unfamiliar with cryptocurrencies, payment is also being taken by credit and debit cards.